President Emmanuel Macron will on Wednesday seek his cabinet's blessing for a draft law targeting radicalisation, which some fear will stigmatise the French Muslim community, Europe's largest.

The text was originally titled the "anti-separatism" bill, using a term Macron uses to describe ultra-conservative Muslims withdrawing from mainstream society. Following criticism of that term, it is now called a "draft law to strengthen republican values", mostly secularism and freedom of expression.

The law was in the pipeline before the murder in October of Samuel Paty, a junior high school teacher who was attacked in the street and beheaded after showing cartoons of the Prophet Muhammad in a civics class.

But the killing, committed by an 18-year old Chechen after a virulent social media campaign against the teacher, gave fresh impetus to the bill, prompted the inclusion of the specific crimes of online hate speech and divulging personal information on the Internet.

Paty's death is one in a string of jihadist-inspired attacks in France which include the 2015 shooting sprees at satirical magazine Charlie Hebdo and the Bataclan concert hall; and the stabbings at a church in the Mediterranean city of Nice the same year. Nice was also the scene of a 2016 attack that killed 86 people when a man rammed a truck into Bastille Day revellers.

Acknowledging that Islamist radicalisation can be homegrown as well as imported, the government is targeting associations and mosques in France that it suspects of spreading jihadist ideology.

The law would make it easier to stop them receiving foreign financing, and would also offer protection to moderate community leaders who are in danger of being toppled by an extremist "putsch".

The draft law also proposes stricter criteria for authorising home schooling of children over three years old in a bid to prevent parents taking their children out of public schools and enrolling them in underground Islamic structures.

Doctors, meanwhile, would be fined or jailed if they performed a virginity test on girls.

Polygamy is already outlawed in France, but the new law would also ban authorities from issuing residency papers to polygamous applicants.

It would also require city hall officials to interview couples separately prior to their wedding to make sure that they were not forced into marriage.

Macron has become a figure of hate in some Muslim countries, with some boycotting French products, after saying that the right to blaspheme would always be guaranteed in France and that Islam was "in crisis".

Macron has also been forced onto the defensive by critical headlines in influential English-language media, such as the Financial Times and New York Times.

The FT, an opinion piece that it later removed from its website, accused him of fostering a "hostile environment" for French Muslims.

"I will not allow anybody to claim that France, or its government, is fostering racism against Muslims," Macron wrote in an angry letter to the paper.

Muslims in France -- the former colonies of which include predominantly Muslim countries in north and west Africa as well as the Middle East -- are estimated at nearly four million, about six percent of the population.

Muslim women in Belgium organised a different kind of protest. They gathered in Antwerp to celebrate at a beach party, dressed in burkinis, bikinis or bathing suits. Their motto was: "We are women and we are free". By Greta Hamann 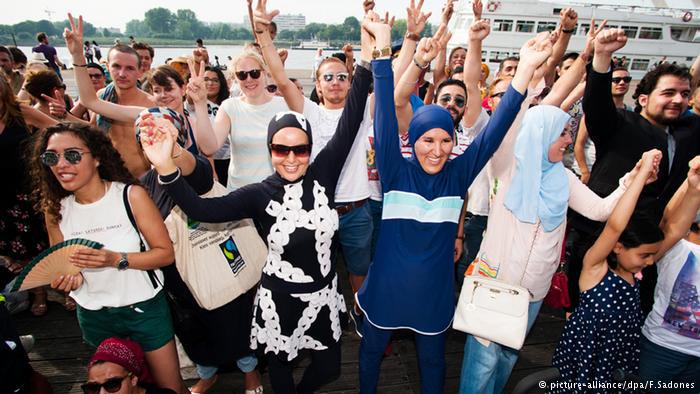 Against the burkini ban: it's not a real beach and not France; nonetheless, it was a symbolic gesture against the now-overturned burkini ban on some French beaches. "Women and men should decide for themselves what they want to wear," said a woman wearing a bikini at the event 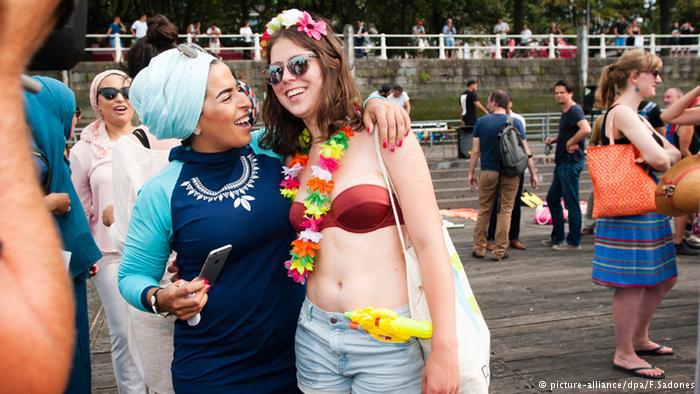 Celebrating together – no matter what clothes you wear: some wear burkinis, others wear bikinis - and everyone is happy. That is the message the protesters want to convey. Organisers had originally expected 300 people; over 1,000 people expressed their interest on Facebook 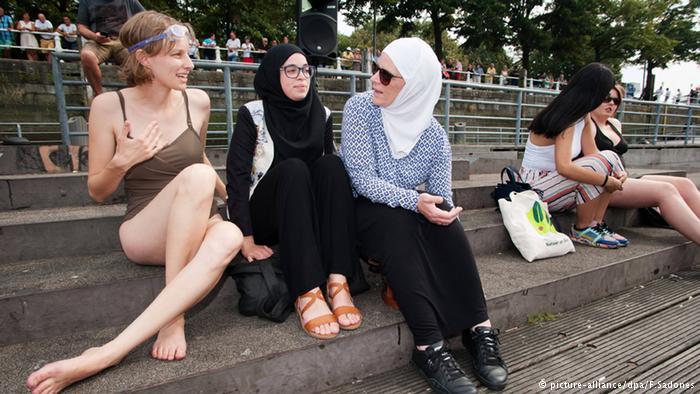 Completely covered at a beach party: the young women proved that you don't have to show lots of skin or wear beach attire at a summer party. Some came completely covered in a niqab and others came with a headscarf 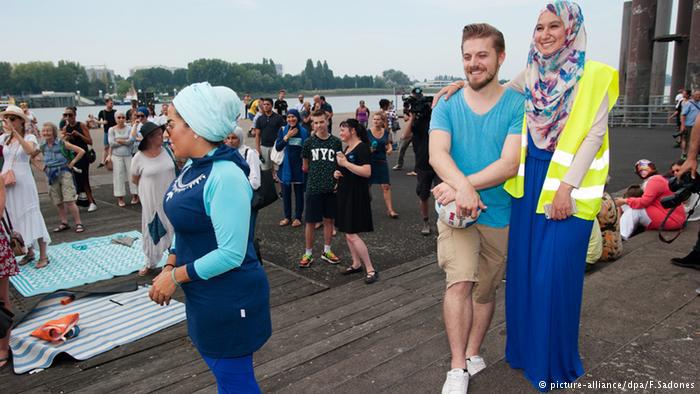 'Ridiculous ban': "The ban is ridiculous. I want to wear what I want to wear. Women and men everywhere should be free to dress or undress themselves, depending on what they prefer," the young woman in a blue burkini (left) told Flanders News 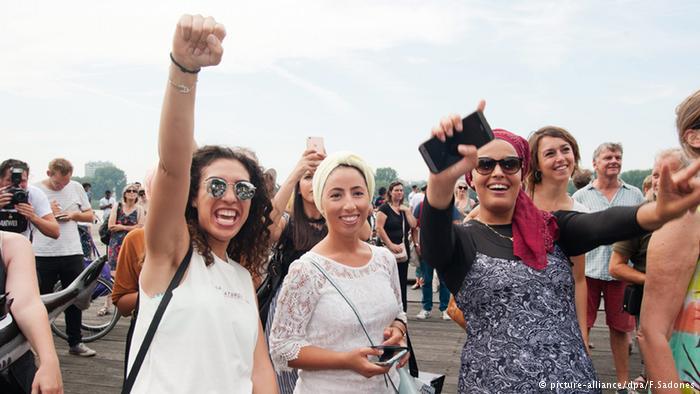 We don't wear tents: the party was also a statement against the mayor of Antwerp who, according to reports in the Belgian newspaper "Gazet van Antwerpen," said that veiled women "wore tents" 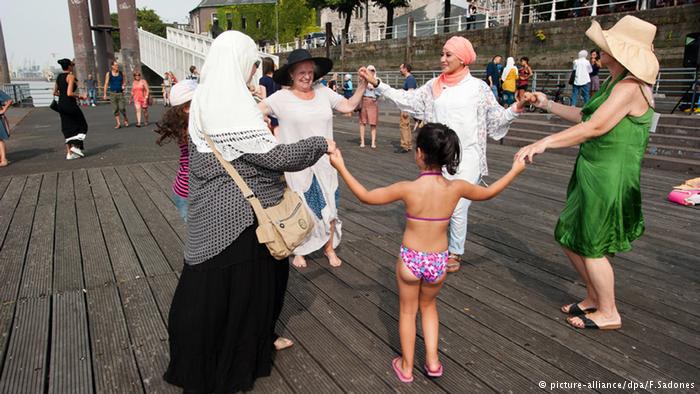 Demonstration of solidarity: in Belgium, Muslims have the second largest religious community after Christians. Most Muslims are immigrants or the children of immigrants. Unity is something seldom seen in the country divided by the Flemish and Walloons 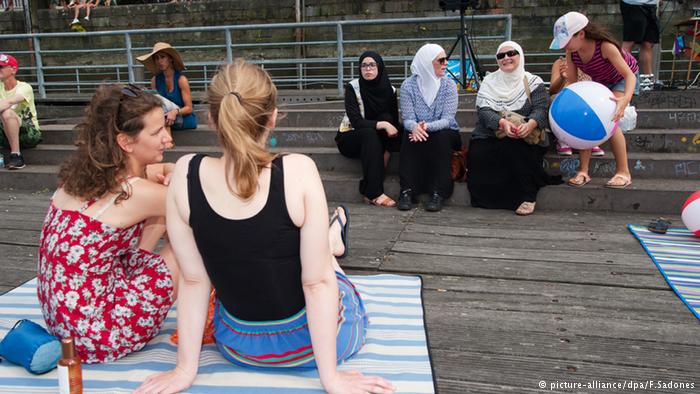 Right-wing protest: during the peaceful beach party, a few far-right anti-Islam demonstrators protested against the event. They chanted, "No jihad on our streets!" 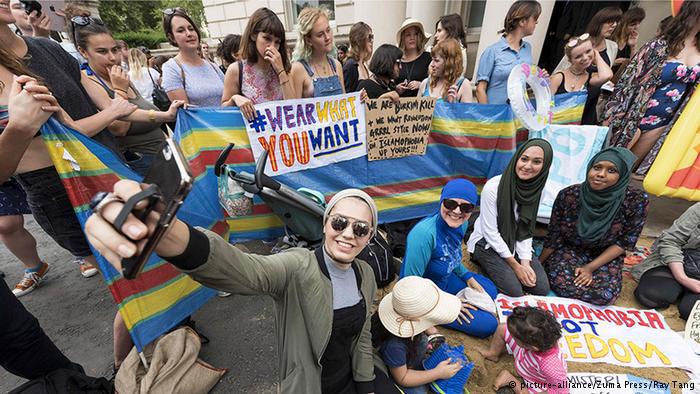 Pro-burkini protests elsewhere: "Wear what you want" beach parties were held in London and Berlin. Activists brought sand to the French Embassy in London for their celebration

French governments have often been at odds with Muslim traditions when they were perceived to run counter to core French values or hinder integration.

Former president Jacques Chirac once said that French workers resented large Muslim families living off social benefits, and were driven "crazy" by the "noise and the smell", adding that this was "not a racist thing to say".

A 2010 law, dubbed the burqa ban prohibits the wearing in public of the full-face veil.

Once, as is expected, the cabinet backs the draft law, it heads to parliament at the start of next year for what promises to be a heated debate.

France's state council, which advises the government and the National Assembly on future laws, has already signalled that some parts of the bill, especially on education, may clash with the principle of freedom of choice enshrined in the French constitution.

END_OF_DOCUMENT_TOKEN_TO_BE_REPLACED
Social media
and networks
Subscribe to our
newsletter