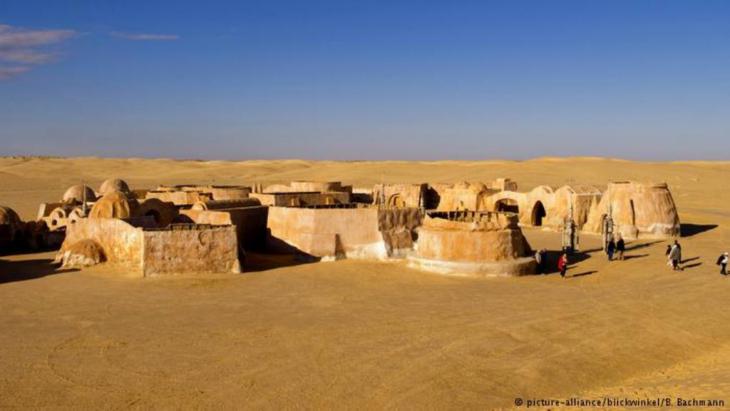 Reviving the Tunisian tourism industry: Calling on the force

Tunisia′s appeal as a holiday destination hit rock bottom a couple of years ago when it became the target of several Islamist attacks. Having rescued a number of Star Wars film sets in south-western Tunisia from sinking into the desert sands, a local tourism agency is now hoping to attract the film series′ considerable fan base. By Silke Wunsch

Luke Skywalker is said to have been raised on a non-arable desert planet, beneath two suns, in a landscape formed by heat, sand and dust.

On the edge of the Sahara, Star Wars director George Lucas found his dream film location and named the film planet after the Tunisian village he discovered there: Tatouine – or Tatooine. More than 40 years ago, the film team set up shop in Tunisia and soon started filming in a variety of locations.

Ong Jmel lies in the southwest of Tunisia. To Star Wars fans, the location is better known as Mos Espa, the galaxy waystation where all the gloomy figures gather. It's where Luke Skywalker got to know the smuggler Han Solo, with whom he would embark on his adventures. It's also where Luke's father, Anakin Skywalker – who later became Darth Vader – was born.

There's also the small village of Matmata, where Luke Skywalker was raised by his uncle and aunt. The house in the film is actually a hotel which was constructed in such a way as to remain cool in the desert heat – namely, underground.

In the Sidi Driss hotel, tourists can still discover film props and signs of the action, such as switchboards left in the wall. Yellowing posters and photos of the film crew are hung on the wall.Both locations are pilgrimage destinations for Star Wars fans.

Engulfed by the sand

You might think that tourism here would be booming; Star Wars has millions of fans around the world. After all, who wouldn′t relish the prospect of slipping into a Jedi knight costume and setting foot where Luke Skywalker himself once trod?

For many years, that was the case. Then terrorism came to Tunisia and the tourists stayed at home. The town of Mos Espa – a collection of buildings made of wood and papier-mache – were engulfed by the desert sand.

Save Mos Espa, a 2014 initiative by fans, collected donations in excess of $75,000 for the project, a sum handed over to the Tunisian government. Mos Espa was dug out of the sand.

Nevertheless, tourists are still staying away, preferring the sandy beaches in the north of the country to a nearly 500 kilometre drive to catch a glimpse of George Lucas's desert planet in Tunisia′s arid south.

A pilgrimage through 'Star Wars' filming locations in Tunisia 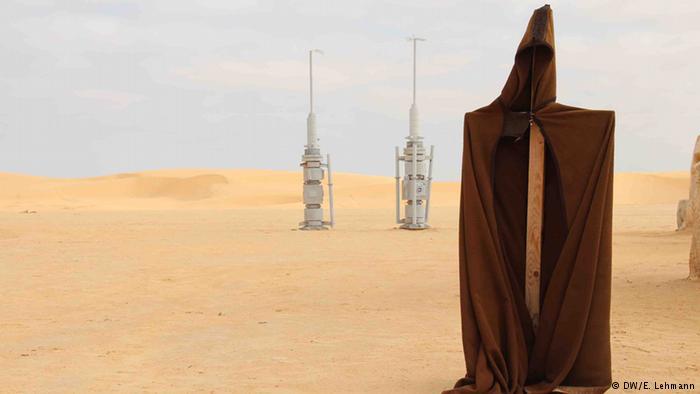 Look like a real Jedi: they look like two wooden rockets, but fans will recognise the moisture vaporators in use on planet Tatooine: they were left behind to show that this was once the location of the spaceport of Mos Espa, a "Star Wars" settlement. Visitors can take pictures of themselves wearing an "original Jedi cloak" – at least that's what the souvenir sellers claim they are 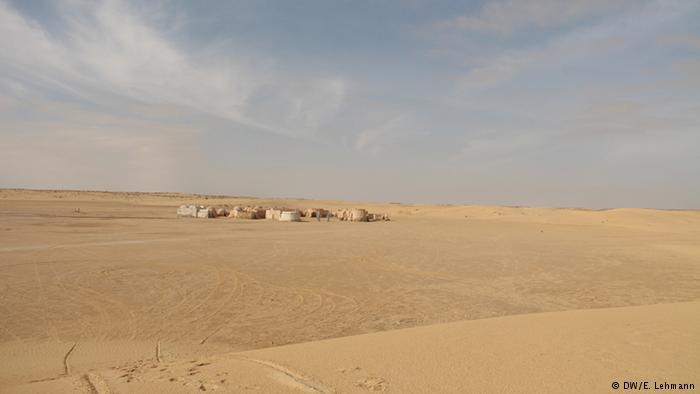 Sand dunes threatened Mos Espa: Star Wars fans around the world raised money and managed to save the filming location of Mos Espa from sinking. Tons of sand were shovelled away with excavators. Now fans and tourists can keep on visiting the hometown of Anakin Skywalker, aka Darth Vader 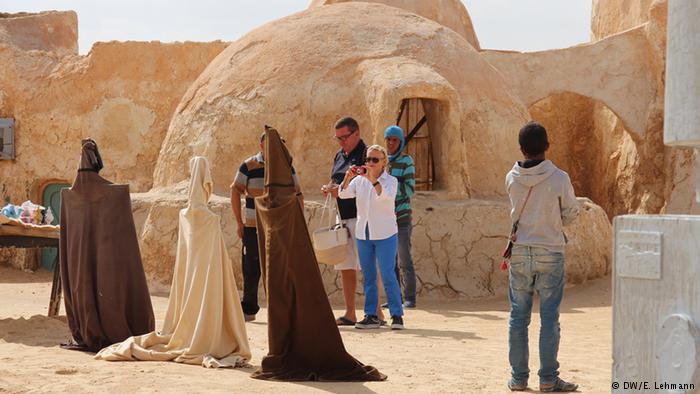 Tourists the centre of attention: very few visitors make the trek these days to the film city of Mos Espa in the remote south-west of Tunisia, so local souvenir dealers tout their goods as soon as anyone shows up. French tourists Yvonne and Francois Boisson were nonetheless eager to visit the set. Huge Star Wars fans, they follow the footsteps of Luke Skywalker 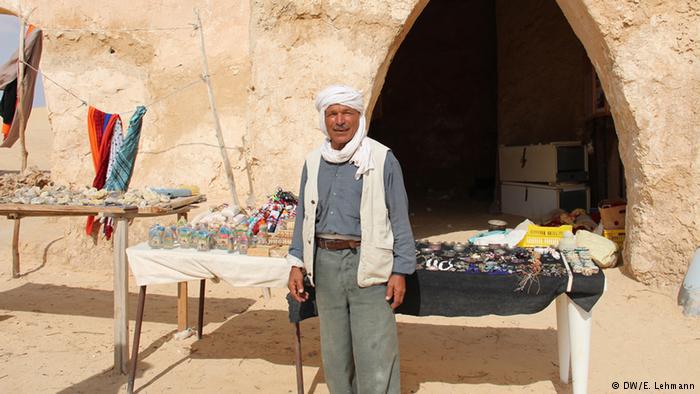 Working in a foreign galaxy: working for over 30 years in tourism, souvenir merchant Salem Ben Said has spent many of them in another galaxy: on the planet Tatooine, where the city of Mos Espa is located in the film. Among other souvenirs, he sells small dried scorpions and jewellery 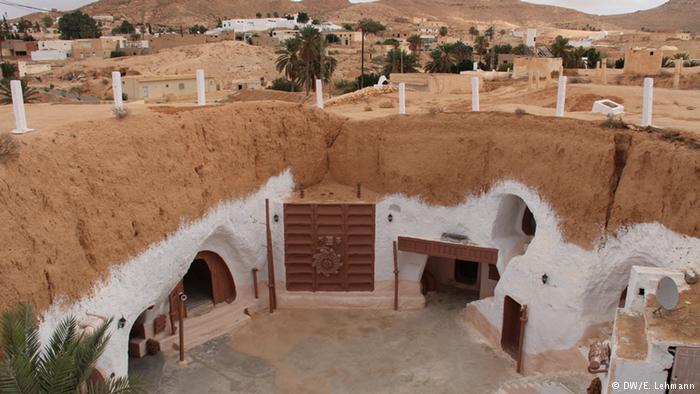 Where it all began: this is where the very first "Star Wars" movie was shot. The architecture of the hotel Sidi Driss, built into the earth, is not uncommon in Matmata, a small desert town in central Tunisia. The building technique offers protection from the heat. But when filmmaker George Lucas discovered it, he must have felt like he had just landed on another planet 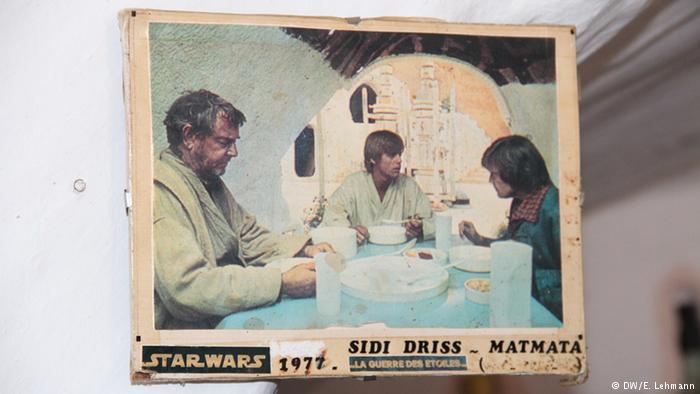 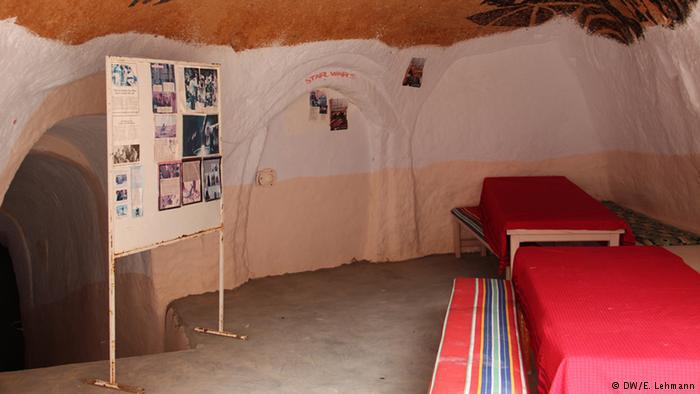 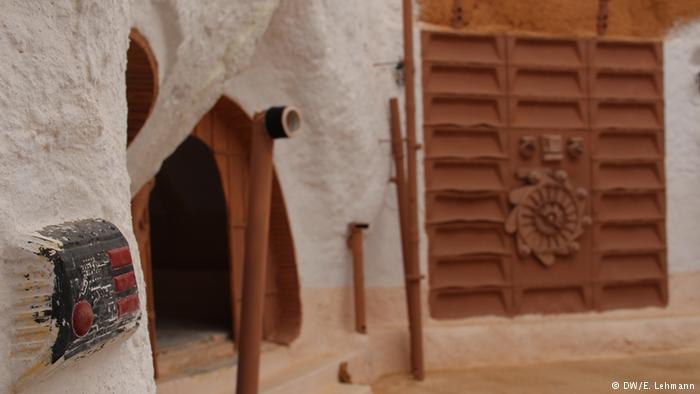 Run-down props: Plastic pipes, blades, buttons: these props are parts of a spaceship left over from the film shoot. Today, the paint is peeling off and, like the whole hotel, they're a bit shabby. But that adds unique charm to the town 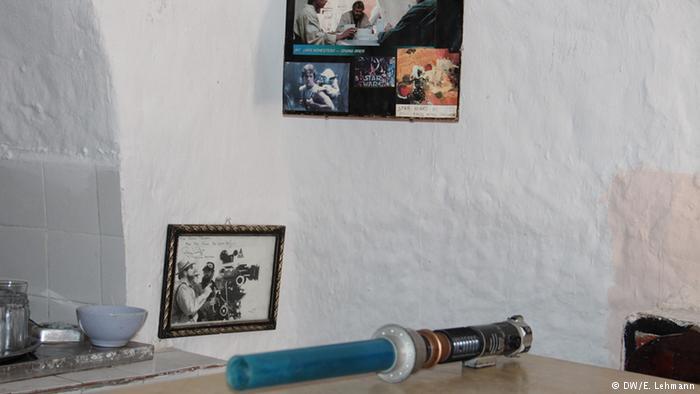 This lightsabre is out of order: like any true Jedi, Luke Skywalker had a lightsabre. Although it looked elegant and futuristic in the film, the prop was nothing more than a plastic rod emitting croaking noises. This one stopped lighting up years ago. The hotel's walls are covered with photos. The one on the bottom left shows Star Wars creator George Lucas and his team in 1975 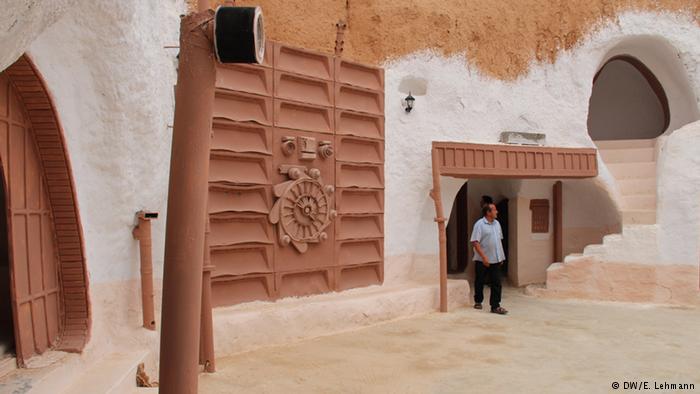 Guardian of the holy site: today, Masoud Rashid is often alone in the hotel Sidi Driss. He has been managing it for many years and still cherishes it and cares for it. He fondly remembers when the big crews showed up to shoot the movies, transforming the whole region for a few weeks. The latest Star Wars movie was shot in Abu Dhabi – officially for security reasons. Author: Elizabeth Lehmann

Loyal fans have not given up, however. Nabil Gasmi of the regional tourism organisation CDTOS is continuing work to protect the film set from being forgotten: "We have to. Everyone here in the area profits from the film set and sees it as a part of their inheritance."

He dreams of turning the region into a tourist magnet – complete with convenience store, museum, film screenings and festivals. The idea is to get as many locals involved as possible, since unemployment, especially among the young, is rife.

In March 2017, the concept was launched at the International Tourism Exchange (ITB) trade fair in Berlin by a delegation of Tunisian tourism managers. They are particularly hoping to attract the interest of tourists from across Asia, as a new wave of adventurous consumers begins travelling the globe in search of the choicest destinations. Indeed, the desert of southern Tunisia could yet prove a goldmine.

Home
Print
Newsletter
More on this topic
Hamza Meddeb on the "No Future" generation: Tunisia's ticking time bombNGO report on the Jasmine Revolution and security in Tunisia: How to make the transition from dictatorship to democracySocial unrest in the Arab world: Guilty of gross negligence
Related Topics
Cinema
All Topics

Tunisia has launched a successful transition to democracy, but difficult economic and social times lie ahead. According to political scientist Said AlDailami, Europe should focus ... END_OF_DOCUMENT_TOKEN_TO_BE_REPLACED

Mass protests began in Egypt on 25 January 2011. They triggered the overthrow of long-time ruler Mubarak. Ten years later, many human rights activists and journalists are in ... END_OF_DOCUMENT_TOKEN_TO_BE_REPLACED

Mass protests began in Egypt on 25 January 2011. They triggered the overthrow of long-time ruler Mubarak. Ten years later, many human rights activists and journalists are in ... END_OF_DOCUMENT_TOKEN_TO_BE_REPLACED

Recent unrest shouldn't come as a surprise to anyone who's followed Tunisia's trajectory. The image of the North African country as the only "survivor" of the uprisings in the ... END_OF_DOCUMENT_TOKEN_TO_BE_REPLACED

Ten years after the start of the Arabellion in North Africa and the Middle East, many view the movement as a failure. But rather than being over, it has now entered a more mature ... END_OF_DOCUMENT_TOKEN_TO_BE_REPLACED

M’hamed Oualdi presents the story of a manumitted-slave-turned-dignitary in the Ottoman province of Tunis and the posthumous conflicts over his estate as a case study to ... END_OF_DOCUMENT_TOKEN_TO_BE_REPLACED
Author:
Silke Wunsch
Date:
Mail:
Send via mail

END_OF_DOCUMENT_TOKEN_TO_BE_REPLACED
Social media
and networks
Subscribe to our
newsletter