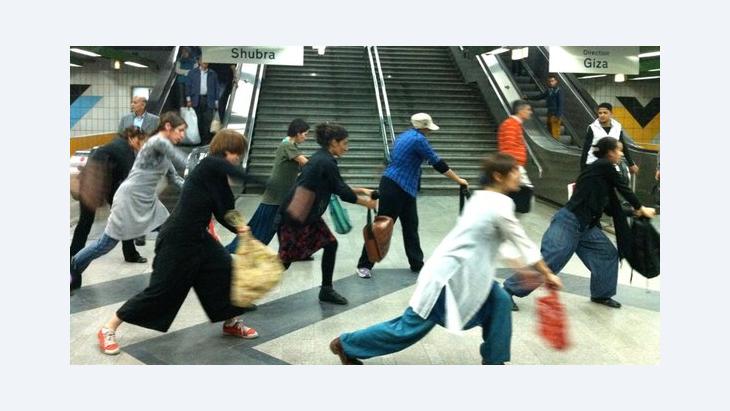 Eight women stand on an escalator leading to the platform of the St. Theresia metro station in the district of Shubra. They stand one behind the other and don't seem to be paying much attention to anyone else. Then the first woman reaches the bottom of the escalator. Instead of walking further to the train platform like all of the other passengers, she presses her body against the wall and begins to writhe along it.

The woman behind her does the same, as do the next six women. They stretch, roll, and push themselves along the wall until they reach its end and arrive at the platform. There, they remain pressed up against the wall without exhibiting the slightest movement.

In the meantime, a train has already arrived and passengers exit the wagons. Some look puzzled, yet continue on their way. Others stop and laugh. One elderly man remains standing for a particularly long time. His head leans slightly to one side and he stares with a wrinkled brow at this tangled up group of women winding along the wall. His gaze seems to ask, "What in the world are they doing? What's this supposed to be?" 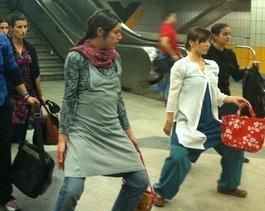 Flash mob art: The performances of the "Stop and Dance" project appear to outsiders as completely spontaneous and unannounced. They simply wouldn't function on stage

​​Then, the honking signal of the metro tears him away from his thoughts. The driver blares his signal horn a few more times. Evidently, he noticed the women too and seems to have enjoyed the performance.

The eight women are members of the "Stop and Dance" project, an intercultural dance project that aims to bring dance to public spaces. Their performances took place on three weekends from the end of March until mid-April in various metro stations around Cairo.

The project was organized by "Mahatat", a multicultural art initiative, which was founded last year by four initiators. Their goal is to promote art in public spaces and thereby bring art directly to the people. All of this year's projects therefore bear the name "Shaware3na," which means "our streets".

The main sponsor of "Shaware3na" has been the Danish Egyptian Dialogue Institute. Among other sponsors is the German Embassy, which provided support for workshop accompanying the "Stop and Dance" project.

In addition to the "Stop and Dance" project, Mahatat has organized other street actions this year, such as "The Tree Project" in the Dokki district of Cairo. The Egyptian artist Yara Mekawei and the Danish artist Nanna Guldhammer conducted a workshop together with art students and young people from the district to work out artistic designs for local trees. The workshop concluded with a one-day festival for the neighbourhood, in which the artworks were put on display.

For the freedom of artistic expression

"We do what we do for the sake of art," says Mayada Said, one of the initiators of Mahatat. Set in motion by the post-revolutionary mood in Egypt, the Mahatat collective emerged from the passion, commitment, and the vision of its four initiators to support mobile arts in public spaces. The goal of the collective is to support the freedom of artistic expression in Egypt.

At present, street art and street culture are still rare phenomena in Egypt. Artists and project initiators are therefore always prepared for possible difficulties that might arise during their actions in public spaces. For every performance, the artists are accompanied by security personnel, who are there to deal with security staff at the performance venue and, when necessary, also to talk with the public.

"Street art is something that is deeply embedded in Arab culture. It is nothing new. The street always played an important role, with our recent history being the only exception," says Mayada Said.

Three choreographers – Karima Mansour (Egypt), Paulina Almeida (Portugal), and Birgitt Bodingbauer (Germany) – conducted a two-week workshop for the "Stop and Dance" project to prepare the eight dancers, most of whom were amateurs, for their performances.

A metro station as a dramatic element

The performances begin in the manner of flash mobs – spontaneous and without any announcement. From one second to the next, passers-by are transformed into a dance troupe. "We work with movements that we can observe every day in the metro. The performance functions in a completely subtle fashion," says Birgitt Bodingbauer. Even the stations themselves serve as a dramatic element. 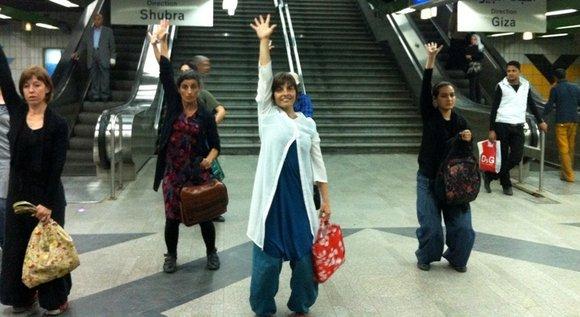 Conquering public space: Staging cultural events on the street in Egypt under Mubarak was next to impossible. The revolution created new stages and opportunities for artists, who now want to take advantage of the recent freedoms

​​"Every station is different, and this also alters the elements that we employ," explains Paulina Almeida. The performances are conceived for a public space and therefore not appropriate for the stage. Above all, improvisation plays a great role and the dancers must be able to quickly react to unforeseen circumstances.

The "Stop and Dance" project is also something new for most of the participants. In one workshop, professional dancers work together with amateurs on the choreography of the performances.

"We have experienced just about everything," says Mayada Said, project manager for "Stop and Dance". Sometime, security staff at a station want to immediately evict the dancers and stop the performance. Once, a security officer came up to Mayada Said and gave her a CD of himself. As an amateur singer, he was so thrilled by the performance that he hoped he might be able to take part.

Not only for the passers-by is it unusual to experience dance at a location typically reserved for the hustle and bustle of everyday life. The dancers, as well, approached their task with a great deal of respect. "I was truly scared to death," exclaims Amany Atef.

The 22-year-old student finds it difficult to imagine that Egyptians would understand the concept of a flash mob performance. "The first time, I was terrified of their reactions. But most passers-by were very nice, laughed, and clapped." Mram Ahmed had similar feelings. "But the energy of the group made things easier. We are not alone."

Whatever reactions "Stop and Dance" provoked among the passers-by, the dancers have most certainly achieved one goal – they have managed to break through the everyday life of ordinary people with their art, even if but for a moment.

Home
Print
Newsletter
More on this topic
The Film ''Tracks of Cairo'': An Audio Diary of the RevolutionThe Cultural Scene in Egypt: Creative Artists Are the Motor for ChangeInterview with the Egyptian Theatre Director Laila Soliman: Vomit – Until the Revolution Comes
Related Topics
Dance, Theatre in the Arab world
All Topics

Algeria‘s regime is again cracking down on anti-fracking activists and the unemployed in the country‘s south. Yet EU countries remain keen to scale up their energy cooperation ... END_OF_DOCUMENT_TOKEN_TO_BE_REPLACED

The murder of a female student at Mansoura University in the Nile Delta has sparked a long overdue debate on femicide in Egypt. Karim El-Gawhary reports from Cairo END_OF_DOCUMENT_TOKEN_TO_BE_REPLACED

Syria, Egypt, Saudi Arabia and the UAE are among those countries increasingly misusing cybercrime legislation to silence dissent and curb freedom of speech. Could a new global ... END_OF_DOCUMENT_TOKEN_TO_BE_REPLACED

Egypt hopes to jump-start the action needed to face a warming world when it takes the presidency of major UN climate talks in November, but warns that countries need a "reality ... END_OF_DOCUMENT_TOKEN_TO_BE_REPLACED

A ceasefire has been in effect in Libya for the past year and a half. Yet after Russia's attack on Ukraine, another proxy war looms in Africa's most oil-rich country. Mirco ... END_OF_DOCUMENT_TOKEN_TO_BE_REPLACED

It is the biggest order in the history of the Siemens Group: a 2,000-kilometre railway network for high-speed trains is to be built in Egypt. But the project raises numerous ... END_OF_DOCUMENT_TOKEN_TO_BE_REPLACED
Author:
Amira El Ahl
Date:
Mail:
Send via mail

END_OF_DOCUMENT_TOKEN_TO_BE_REPLACED
Social media
and networks
Subscribe to our
newsletter