A Palestinian Throws the Dice

The Palestinian poet Mahmoud Darwish was hailed as the poetic voice of the Palestinian people. Now, an Arabic-German edition of his epic poem "The Dice Player" has been published. Stefan Weidner read Darwish's literary legacy

​​ The work of Palestinian poet Mahmoud Darwish, who died a year ago at the age of 67, underwent a number of very different creative periods, from very catchy texts that were often set to music in the 1960s, to highly complex word constructs charged with myth and symbolism in the 1980s and 90s.

The epic poem "The Dice Player", just published in a new German-Arabic edition, combines the best of both periods.

It helps to be aware of who has written this poem when reading it – ideally just as Arab readers are. Take the first lines, for example, which are startling when you know who has penned them:

Who am I to say to you
What I say to you?
(…)
I'm a dice player
I win sometimes
I lose sometimes
I'm like you
Or a little bit less than you

The great Palestinian poet, of all people, steps down from the pedestal that his devotees have erected for him and in one of the last poems before his death, speaks as one of them, "or a little bit less". 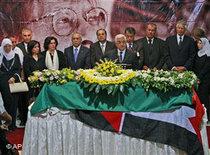 Mahmoud Darwish died at the age of 67 after open heart surgery. After his death, Palestinian President Mahmoud Abbas declared three days of mourning

​​Of course, there is another voice at work in the background: The poem, although it is composed in a deliberately simple language, is about the twilight of life, which casts it in the same mould as Stéphane Mallarmé's famous poem "Un coup de dés" ("A Throw of the Dice") – a poem that also roots Darwish's work.

One could describe the 40-page poem as a poetic biography, the poet's search for his purpose and identity in an unpredictable world deserted by God: "How easily would it be possible
I couldn’t find an English translation of this line
, not to be!"

The positive power of chance

Surprisingly however, chance turns out to be a positive force that makes it possible to interpret the story differently. This exposes all those ideologues who assign a deeper meaning to the story, and interpret its progression as an endorsement of their world view and their entitlements – the common procedure in the Holy Land and Darwish's homeland of asserting one-sided ownership claims:

And by chance some storytellers lived and said:
If the others beat the others
Our human history would have different headlines

Darwish was regarded as one of the greatest poets in the Arab world. Together with the Israeli Professor of Psychology Dan Bar-On, Darwish was awarded the Osnabrück Remarque Peace Prize in 2003

​​The poet's personal story makes some parts of the work all the more moving, and again here it is advantageous to be aware of the biography of the poet who was plagued with heart problems and lived with the constant threat of heart attack, who cheated death several times and eventually died after open-heart surgery:

The dispensation of punctuation results in some ambiguity in the German edition. But the German translation is nevertheless an accessible rendition of the original. The volume is rounded off perfectly by an empathetic preface by the translator Adel Karasholi, a long-time friend of Darwish.

Mahmoud Darwish: Der Würfelsieler. Ein Gedicht (The Dice Player. A Poem). Translated from the Arabic by Adel Karasholi. A1 Verlag, Munich 2009. Not yet published in English.

Mahmoud Darwish
Palestine's Poetic Voice
Mahmoud Darwish, critically acclaimed as one of the most important poets of the Arabic language, is often referred to as "the voice of the Palestinian people". Now, two new publications provide an illuminating look at his life and work. By Martina Sabra

END_OF_DOCUMENT_TOKEN_TO_BE_REPLACED
Social media
and networks
Subscribe to our
newsletter