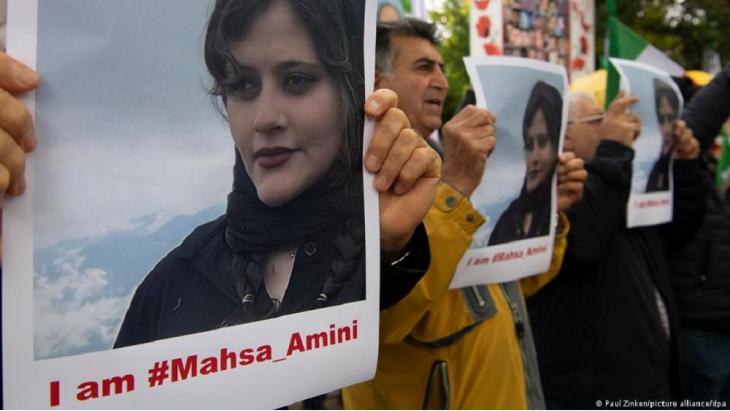 The violent death of 22-year-old Mahsa Amini has achieved something the entire opposition has failed to do during the 43-year rule of the ayatollahs in Iran: almost the entire Iranian people are united on one issue, only the regime supporters are divided. By Parvin Irani

On her grave is written: “You did not die, your name will be a code”. Mahsa Amini's name is already more than a code. The hashtag #MahsaAmini was mentioned more than 1.5 million times on Twitter alone last Wednesday, topping all other topics on the social network for hours. Her name also rang out at demonstrations in Iranian streets and on university campuses.

The cause of the 22-year-old's death is being reported in different ways on the Internet: Kasra Hospital in Tehran initially posted on Instagram that Mahsa Amini was already brain-dead when she was admitted, yet this post was subsequently removed. Women who were brought to the police station together with Mahsa reported being beaten by the morality police. And her brother, according to his own account, saw traces of torture on her body.

The authorities resorted to their usual tactics when explaining the cause of death: Mahsa had died of an illness, the police officers had not laid a finger on her (the police chief), the morality police did not carry batons (the interior minister).

These reactions are reminiscent of the events surrounding the Ukrainian passenger plane shot down by two Iranian Revolutionary Guards missiles near Tehran on 8 January 2020. All 176 occupants were killed. Before the regime admitted that the guards had shot down the plane "accidentally", various lies were told: "irrational rumours", "another conspiracy in the psychological war against Iran", "no missile parts were found at the accident site". 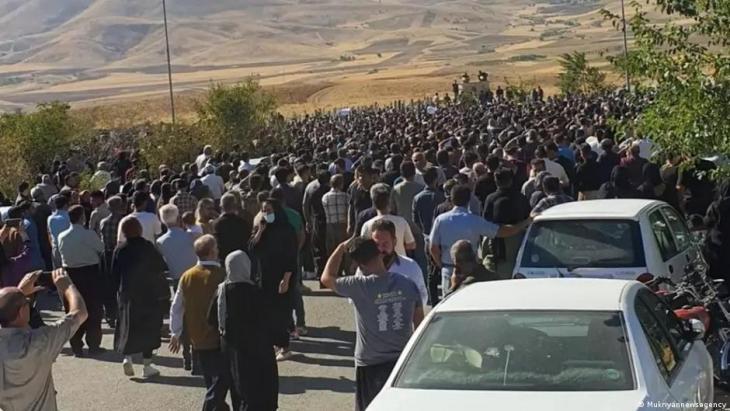 Funeral for Mahsa Amini in her hometown Saqqez in western Iran: following her death in Tehran's Kasra hospital, the 22-year-old was buried post haste. According to her father, the authorities wanted her to be buried that night to avoid gatherings and protests. But he insisted the funeral service be held in broad daylight. An official investigation into the cause of death is thus no longer possible. However, women who were brought to the police station together with Mahsa report being beaten by the morality police and her brother has said he saw traces of torture on her body

Official cause of death: heart attack

Mahsa Amini was arrested on 13 September as she was leaving a Tehran metro station with her brother and other relatives. They were visiting the capital. The family lives in the western Iranian city of Saqqez. Mahsa was arrested along with other women whose clothes did not comply with state regulations and taken away in a van belonging to the morality police.

In a video released by the vice squad, Mahsa is seen entering a large room where other women are sitting on chairs. She takes a seat but immediately stands up again, goes to an officer and impatiently points to her coat and other items of clothing in black, obviously objecting to her arrest. Shortly afterwards she leans towards a table and that's where the film ends. She is taken to Kasra hospital and we see her lying on a stretcher.

Doctors and experts abroad surmise from the photo of the hospital bed that she may have suffered concussion, caused by colliding with a hard object. In some cases, the affected person can still think clearly and walk normally for a while until the blood spreads to the brain.

Only then does the person fall into a coma. However, it is no longer possible to determine whether Mahsa met her death in this way, because she was buried post haste. According to her father, the authorities wanted her to be buried at night to avoid gatherings and protests. But he insisted she be buried in broad daylight.

Since Mahsa's death, there have been protests in various cities in Iran and also abroad. First in the province of Kurdistan, where Mahsa came from, then in other parts of the country, many shopkeepers closed their businesses as a sign of mourning. Demonstrations have also been taking place in the capital Tehran since Monday (19 September). On university campuses, female and male students are protesting against forced veiling and discrimination against women. There have been deaths, injuries and many arrests, according to social media.

Reformists and sections of conservatives within the power circles showed solidarity with Mahsa's family. President Ebrahim Raisi called the family and offered his condolences. According to Mahsa's uncle, he promised to investigate the case. He still, however, refuses to clarify the mass executions in the summer of 1988, for which he shares responsibility. About 20 members of the Islamic parliament, all conservatives, have expressed their condolences to the family.

Various opposition groups, some of which cannot stand each other – monarchists, republicans, leftists, nationalists and liberals – have moved closer together after Mahsa's death in order to coordinate their activities following the violent death of the young woman. Many cultural figures, artists and sportswomen have written letters of condolence, directly or indirectly condemning the government's policies based on its own interpretation of Islam.

This time, star director Asghar Farhadi has also spoken out. The two-time Oscar winner, father of a 24-year-old daughter, often criticised for keeping silent in the face of injustice, would claim that he was already speaking through his films. Even when filmmakers were arrested and one artist even died in prison, he kept quiet.

Now, for the first time, he has penned a critical letter, addressed to Mahsa: "My dear daughter Mahsa, traveller in the city of the somnolent. I imagine you made a note somewhere in a corner of your heart before your journey: 'I will find some interesting places in Tehran, besides my everyday mundanities, and see sights worth seeing.' Now you have seen what this city has to offer".

And further: "There is nothing more to see here, this is all this city has to offer. I have found no rest since I read the news about your case yesterday. This time I hate myself for it. You appear to sleep in your hospital bed, yet you are more awake than any of us; we are all in a coma! We have closed our eyes to the endless atrocities and pretended to be asleep. We are all guilty of this crime."

Mahsa’s violent death has achieved something no-one has been able to do for 43 years: it has united almost the entire Iranian people in mourning  – and against the inhumane regime. How long this unity will last and whether it is the beginning of a new phase in Iran’s history, only time will tell.

Parvin Irani is a pseudonym chosen by the editorial staff of Iran-Journal. The author works for Persian-language and German media.

Fariduddin Attar’s "The Conference of the Birds", one of the seminal works of Islamic mysticism, has recently been published in sumptuously illustrated German translation. It ... END_OF_DOCUMENT_TOKEN_TO_BE_REPLACED

In "Iran. Die Freiheit ist weiblich", journalist Golineh Atai describes the dogged resistance of courageous Iranian women against the Islamic Republic and the mullahs who have ... END_OF_DOCUMENT_TOKEN_TO_BE_REPLACED

Like Christianity, Europe's history is one of migration. Both have strong roots in the Orient and in cultures thousands of years old. Cultural historian Bernhard Braun invites us ... END_OF_DOCUMENT_TOKEN_TO_BE_REPLACED

A lot is happening in Syria’s Sweida Governorate – foreign intervention there is unprecedented both in terms of scale and number of actors – yet Damascus remains the dominant ... END_OF_DOCUMENT_TOKEN_TO_BE_REPLACED

Russia is leaving no stone unturned in its attempts to make the Islamic Republic an ally in the war against Ukraine. Fortunately for Vladimir Putin, the mullahs in Tehran are ... END_OF_DOCUMENT_TOKEN_TO_BE_REPLACED

The clashes in Baghdad between supporters of Muqtada al-Sadr and pro-Iranian militias show that an intra-Shia power struggle is in full swing. An analysis from Cairo by Karim El- ... END_OF_DOCUMENT_TOKEN_TO_BE_REPLACED
Author:
Parvin Irani
Date:
Mail:
Send via mail

END_OF_DOCUMENT_TOKEN_TO_BE_REPLACED
Social media
and networks
Subscribe to our
newsletter