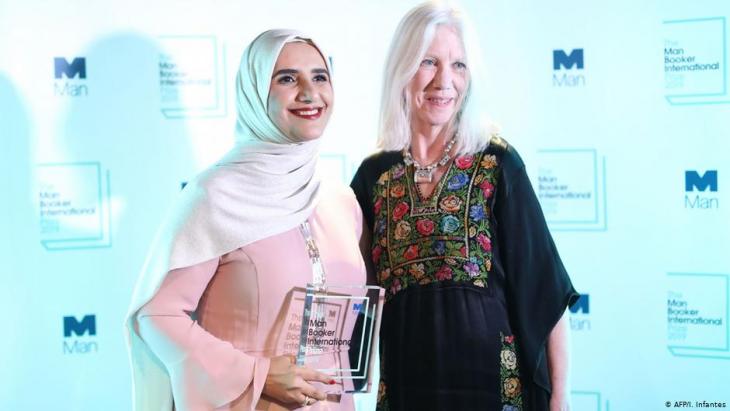 Omani novelist Johka Alharthi confounded regional literary pundits earlier this month when she carried off the highly prestigious Man Booker International prize for "Celestial Bodies". Marcia Lynx Qualey caught up with her and the novelʹs translator, Marilyn Booth, the morning after the award was announced

Johka Alharthiʹs "Celestial Bodies" is the first Arabic novel ever to win the Man Booker International (MBI). Vibrantly translated into English by Marilyn Booth, the novel centres on the lives of three Omani sisters and slips back and forth through recent history.

Yet while the judgesʹ choice of Celestial Bodies was reportedly unanimous, it was something of an unlikely winner. Celestial Bodies did not capture a major regional prize in Arabic. Indeed, few Omani novels do. Of the nearly 200 novels that have been longlisted for the International Prize for Arabic Fiction over the years, only one was written by an Omani: Abdulaziz Al Farsi's Earth Weeps, Saturn Laughs. It was the first Omani novel to be translated into English. Celestial Bodies is the second.

Despite the fact that Alharthi generally writes beyond the spotlight, she has worked steadily on her craft. She published her first short-story collection in 2001 and her first novel, Dreams, in 2004. She earned her doctorate from Edinburgh University in 2010 – the same year she published Sayyidat al-Qamr, the novel that became Celestial Bodies. It was while she was at Edinburgh that Alharthi met acclaimed literary translator Marilyn Booth.

Boothʹs joyous translation of Alharthiʹs novel came out last June from a small Scottish publisher, Sandstone Press. At first, Celestial Bodies received scant attention – and then came the 2019 MBI longlist, which brought sudden, hungry interest. Booth said she thinks the win "reminds everyone that Arabic literature is being produced in many different places across the region," and added that it puts a spotlight on "experimental historical fiction." Their partnership is ongoing, and Booth also plans to translate Alharthiʹs 2016 novel, Bitter Orange.

Omanʹs history of slavery, officially abolished in 1970, is central to "Celestial Bodies". What sort of research into the lives of enslaved people did you do for the book?

Jokha Alharthi: The novel was based on two kinds of sources. Sudden hungry interest: Marilyn Boothʹs joyous translation of "Celestial Bodies" was released last June by a small Scottish publisher, Sandstone Press. At first it received scant attention – and then came the 2019 MBI longlist. The win "reminds everyone that Arabic literature is being produced in many different places across the region," says Booth, adding that it puts a spotlight on "experimental historical fiction." The partnership is ongoing – Booth is now planning to translate Johka Alharthiʹs 2016 novel, "Bitter Orange"

The first source was meeting people. I didnʹt do formal interviews, on purpose, to get material for the novel. Instead I chatted to old people who had witnessed such things – I got to hear some incredible stories. They were actually my primary source. And then, when I thought about those stories, I realised I was unable to connect these stories to the older generation [of formerly enslaved people]. These people are Omanis, theyʹve lived for generations in Oman, but what about their origins?

At that point, I engaged in academic research. I figured out how people were brought to Oman, what the processes were, and so on. Some of them came from Africa, some were from Balochistan or other places in Pakistan and Iran, and so I had to read up on that, trying to meld it into my novel. I didnʹt want to give the impression that I was teaching history; I used sources, but the final account is fictional.

How did you take care not to reproduce stereotypes in the novel? For instance, I have heard the stereotype that Omani black people are always singing. I noted that when the enslaved character Habib is singing, his voice is cheerless, "more like weeping than singing."

Alharthi: I made a conscious effort to work against stereotypes. But, at the same time, itʹs not like my sole reason for writing was to challenge stereotypes. Thereʹs a difference between being conscious about challenging stereotypes and merely writing to challenge them. I feel empathy for all of my characters. I try to understand their positions, the way they think and their choices in life.

"Celestial Bodies" boasts a huge cast of characters. Do you have a master document with which you keep track of them and their personal histories?

Alharthi: No, itʹs all in my head. But I donʹt write it from the first chapter to the last. Sometimes, for instance, I will write the tenth chapter and then go back to the third.

How does your academic work on classical Arabic poetry, for instance the ghazal ʹudhri, get woven into the novel? Majnun Layla is very much present in "Celestial Bodies".

Alharthi: The thing with classical Arabic literature is that I grew up with it; I began reading it long before I started my PhD. When I was 13 or 14 years old, I memorised Majnun Layla. I was a big fan. So that love for ghazal ʹudhri is a very old passion. Maybe it affects my fiction, but Iʹm uncertain as to whether there is a direct link.

In an interview with The National, you said, "I am happy that people will read Celestial Bodies but I also hope readers will wish to read other Arabic literature, and other authors from the Gulf." What other authors would you want us to read?

Alharthi: I hope people will forgive me if I forget to mention them! In terms of Omani literature, I recently read Zahran al-Qasimiʹs novel,  Juʹa al-ʹAsl (Hunger for Honey, 2017). I really enjoyed that novel; itʹs set in a unique environment, among the mountains, and I really liked Zahranʹs poetic language. I also like the works by Sulaiman al Maamari, Bushra Khalfan, Hoda Hamed, and Azhar Ahmed, to name but a few.

You also write childrenʹs books. Or at least you did…

Alharthi: Yes, but not any more, because I couldnʹt find a publisher for my last story. So I stopped.

What made you want to write for children?

What kinds of stories did you write?

Alharthi: I wanted to write something entertaining, something very different from what theyʹve been reading in school. The books in school are so boring! My son, heʹs 10 years old, he just laughs about what they teach him at school. I wanted to write something different, with a lot of imaginary scenes, a touch of the fairytale, because I love fairytales, and a touch of our Arabic heritage. Not too heavy, but a touch of it. So thatʹs my dream for children.

Youʹre still looking for a publisher for your most recent childrenʹs book?

Alharthi: I got so many rejection letters that I stopped trying. I think itʹs better to concentrate on my adult fiction.

What are you working on now?

Alharthi: Iʹm working on a new novel, but very slowly. Pascal Mannaerts travelled to Oman at the end of 2019 in search of portrait subjects for a photo essay on women in the Gulf sultanate. Ruled by the enlightened Qaboos from 1970 to ... END_OF_DOCUMENT_TOKEN_TO_BE_REPLACED

With Ramadan over and coronavirus hopefully on the wane, Bader Al-Saif takes a look at how divisions dating back to the June 2017 blockade of Qatar shaped the region's contrasting ... END_OF_DOCUMENT_TOKEN_TO_BE_REPLACED Geopolitical alliances in the Middle East

Todayʹs turmoil in the Middle East is rooted largely in historical legacies and poor leadership, but the influence of religion hasnʹt helped. So it is good news that, from Saudi ... END_OF_DOCUMENT_TOKEN_TO_BE_REPLACED

Substantial numbers of schoolchildren in the Gulf are losing their ability to communicate in Arabic. The development may well herald the onset of language loss in the region. By ... END_OF_DOCUMENT_TOKEN_TO_BE_REPLACED It is rare that a ruler is able to concentrate so much power in his own hands while remaining popular with his subjects: Sultan Qaboos has achieved a synthesis of tradition and ... END_OF_DOCUMENT_TOKEN_TO_BE_REPLACED
Author:
Marcia Lynx Qualey
Date:
Mail:
Send via mail

END_OF_DOCUMENT_TOKEN_TO_BE_REPLACED
Social media
and networks
Subscribe to our
newsletter