Considered the "Bob Dylan of the Middle East", the Lebanese Marcel Khalifeh is one of the few musicians of the region with a political message, writes Ala Al-Hamarneh. Khalifeh was recently named Artist for Peace by the UNESCO 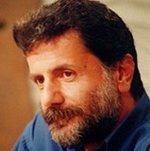 Marcel Khalifeh is not afraid to speak his mind: He, for instance, coined the phrase of the "new Arab cultural harlotry"

​​Marcel Khalifeh was once portrayed by the famous Palestinian poet Mahmoud Darwish as "an artist, a guardian of hope and human qualities, expresser of the spiritual energy of Man, and developer of an aesthetic taste bound with permanent peace, life and freedom". Edward Said described him as an "iconic figure of contemporary Arab culture".

The Lebanese Khalifeh is strongly present in the Arab mass media again: as the first Arab artist named "UNESCO Artist for Peace" by the renowned international organization in June 2005; as a harsh critic of what he calls "the new Arab cultural harlotry" promoted by Arab satellite television channels; and due to his new album (Muda'aba / Caress) and a new four-hour biographical DVD (Rahala / Voyageur).

Khalifeh once said that he is "trying to make Tarab more rational, less instinctive". The Arab word Tarab may be described as a form of trance that the music stimulates in the listener. Rationality is re-called clearly by Khalifeh in the texts of the songs and his personal political stand rather than in his music. The texts of his most popular songs are to great extent poems by Mahmoud Darwish.

In the 70s and 80s, in the years of the civil war in Lebanon, of the resistance against the Israeli invasions and the occupation of South Lebanon, of the Palestinian struggle for civil rights in Israel and the first Palestinian uprising, the combination Khalifeh/Darwish filled a gap in the modern Arab music scene, where patriotic musical pieces were either propaganda or did not tackle current issues.

He is indeed one of the best representatives of the so called "musiciens engagé". The Lebanese composers Rahbani brothers and the singer Feiruz addressed the Palestinian issue in the late 60s in their legendary songs Sanarjiu' Yoman (We shall return someday) and al-Tiflu fil maghara (The child in the grotto), but they did not continue their involvement later by reflecting further political changes through music.

On the one hand, other Arab musiciens engagé (Samih Shuqair, Ahmad Qabour and Sheikh Imam) performed such music, albeit very much less innovative and sophisticated than Khalifah's. On the other hand, the choice of ultra-modern forms of musical expressions which are unknown to the broad Arab audiences by some musicians (such as modern jazz by Ziad Rahbani) highly limited their audience appeal.

Khalifah's interpretations of the local music traditions and the melodic innovations allowed him to successfully transmit the written word through music to a broad Arab audience. Songs of the 70s entitled Passport, Mother, Rita and Bridge, in which topics such as homeland, Palestine, Arab unity, national identity, yearning and sacrifice were addressed, are today classics of this genre. Furthermore, they are still the most requested by concert audiences today as well.

Khalifeh effectively used the Lebanese dialect in songs about the Lebanese civil war and the occupation of South Lebanon. Not only in his own songs like el-jaride (Newspaper), but especially in the solos by Umeyma Khalil / ya bolis el-ishara (Traffic Police), nami ya-zghireh (Sleep, little one), he managed to re-integrate the local dialect into a non-isolationist Arab patriotic musical discourse.

The Lebanese dialect was part of the confrontation between the pro-Arab groups and the Lebanese nationalists in the civil war. There were attempts to constitute a Lebanese language (as well as an alphabet) beyond the Arab language on the base of the local dialect.

The merger between the spoken Lebanese dialect and the Arab musical traditions has re-located the Lebanese "specialty" into an Arab cultural "generalization". In this context, Khalifeh belongs to the Rahbani musical school.

Music for leftist and liberal intellectuals?

With the rise of conservative and radical Islam in the 90s after the crises of the pan-Arab national ideology and the Marxist ideology, Khalifeh tried to re-define Arab music using Darwish's poems as in the operetta Ahmad al-Arabi (Ahmad, the Arab) or purely instrumentally as in Jadal (Moot).

Jadal is indeed one of the best concertos composed by Khalifeh in which the interpretations of the Oud music reach new sophisticated musical levels. The Islamist fundamentalists harassed Khalifeh for his song ana Yusuf ya abi (Ah Father, I am Yusuf). They accused him of heresy.

Although the lyrics were written by Darwish, they attacked only the singer. The stand taken by the fundamentalists resulted in an increase in the popularity of Khalifeh in the liberal circles of society that had earlier ignored him due to his communist past. The experiments with the Oud were followed later with and without lyrics in Concerto Al-Andalus and in his newest Album (Muda'aba / Caress).

Pieces like Granada and I Pass by your Name in Concerto Al-Andalus and Chaza in Caress open new horizons for modern Arab music. Nevertheless, this type of music is not popular among the youth and the broad masses. Khalifeh's concerts are attended by those who were teenagers, the youth of his golden years in the 70s and the 80s.

They want to hear songs and ballades of the resistance and the lyrics of Darwish. His musical innovations are admired by a limited circle of intellectuals. His latest critique of modern Arab pop trends promoted by private satellite TV channels that are owned and/or financially supported by Arab billionaires can be understood as a call for more support of serious, alternative and niche genres of music in the mass media.

END_OF_DOCUMENT_TOKEN_TO_BE_REPLACED
Social media
and networks
Subscribe to our
newsletter