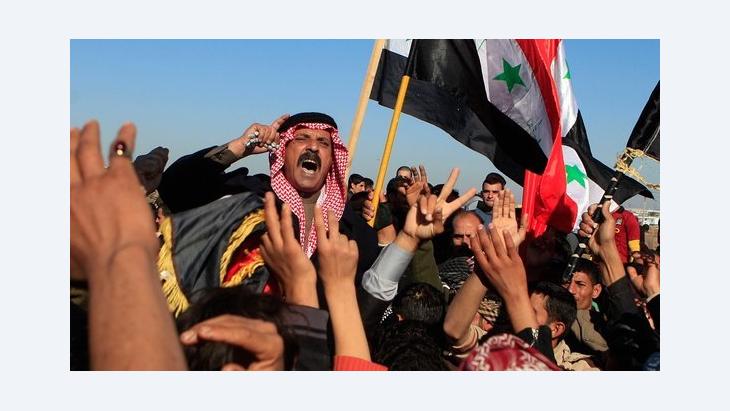 Marching against al-Maliki
Has the Arab Spring Arrived in Iraq?

﻿Iraq's government is falling apart. While the president of the country is being treated for a serious illness in Germany, both the national parliament and the government back home are dysfunctional and in disarray. Birgit Svensson reports from Baghdad

﻿The last US soldiers left Iraq a year ago; that is, apart from the troops who remained in the country to guard the world's largest American embassy in the capital, Baghdad. Ever since the last GI closed the border gate to Kuwait and disappeared into the US military base there, tension in Iraq has continued to rise. Only a few hours after the withdrawal, the ruling coalition in Baghdad collapsed, plunging itself into a crisis that continues to this day.

Even Prime Minister Nouri al-Maliki's announcement in a television address a year ago that Iraq was now a fully sovereign nation and his call for national unity didn't change a thing. The country remains divided.

Al-Maliki was ridiculed for sending millions of text messages, wishing people a happy new year, that were signed "Your bother, Nouri al-Maliki". Even back then, the Iraqis knew that he would not unite the country, but instead deepen existing divisions. Terrorist groups such as al-Qaeda are exploiting the instable environment and conducting a growing number of attacks. 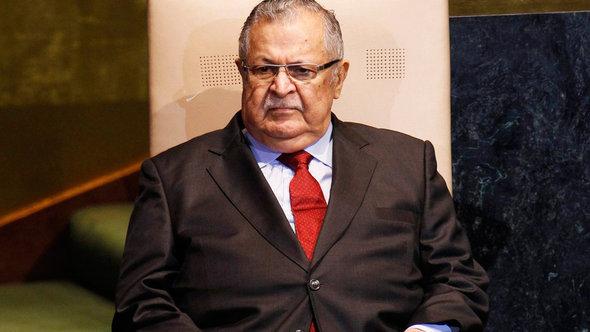 Respected statesman: demonstrations in Iraq erupted in December a day after President Talabani flew out of Iraq for treatment following a stroke. Talabani has long been a moderating influence among Shi'ite, Sunni and Kurdish factions

The focus of the protests has shifted to the Abu Hanifa Mosque in the Baghdad district of Adamiya. After Friday prayers in this mosque, which is the most important place of worship in the country for Iraq's Sunni community, the crowds chant "Out with Iran! Out with Maliki! We've had enough!" And so, as if the chants had resonated out through the walls of the mosque and across the country, thousands of Iraqis have been taking to the streets for several weeks now, especially in the predominantly Sunni province of Anbar, which borders Baghdad to the North-West.

In Ramadi, a former stronghold of the resistance to American occupation, an increasing number of people are now demonstrating against their Shia prime minister, Nouri al-Maliki, and the government. Every Friday, tens of thousands come, waving their flags from the era of Saddam Hussein, when the three green stars of pan-Arabism decorated the national flag.

After the dictator was overthrown, the first freely elected parliament decided at the end of a series of tortuous debates that although the Saddam-era flag would be kept, the three stars would be removed because they were a clear reference to the despised Baath Party. In Ramadi – and in other Sunni-dominated parts of the country too – these stars are experiencing something of a renaissance. 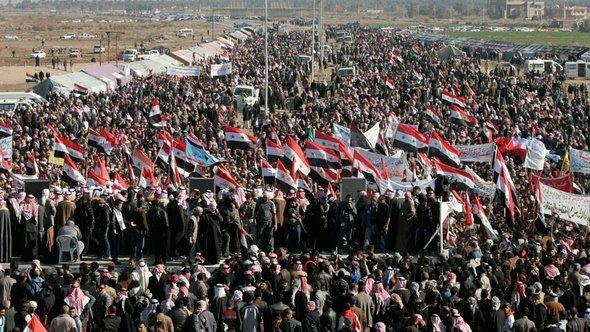 Iraq at a political dead end? Iraqi Sunni Muslims wave the old flag of Iraq during an anti-government demonstration in Ramadi, 28 December 2012. Thousands of protesters from Iraq's Sunni Muslim minority poured onto the streets after Friday prayers in a show of force against Shi'ite Prime Minister Nuri al-Maliki

The demonstrations against the country's prime minister began in Baghdad at the end of December, immediately after the arrest of the bodyguards of Finance Minister Rafa al-Issawi, one of al-Maliki's deputies. After Vice-President Tareq al-Hashemi, Issawi is the highest-ranking Sunni politician in the government. He is now going through what Hashemi went through two years ago, when Hashemi's bodyguards were arrested. They and their boss stand accused of being involved in terrorist activities. Hashemi allegedly kept and commanded death squadrons and hatched a plot against al-Maliki.

He rejected these accusations, initially fled to the autonomous Kurdish territories, and then moved on to Turkey. In his absence, a court in Baghdad sentenced him to death. Observers assume that the same fate now awaits Finance Minister Issawi. Al-Maliki, they say, will go to any lengths to shore up his position. The Sunnis have been complaining for some time that they face discrimination on the labour market in Shia-governed Iraq, that laws are applied to their disadvantage, and that Prime Minister al-Maliki's government is ruled by Iran. Now, however, they are giving vent to their anger about the situation. They are calling for an end to the discrimination.

However, it is not only the Sunnis who are protesting against al-Maliki. The Kurds are also taking to the streets to show their anger. For almost three months now, there has been a stand-off outside Kirkuk between troops from central Iraq under al-Maliki's command and Kurdish troops under the command of the regional government of Iraqi Kurdistan. The threat of armed conflict hangs in the air.

The reason for the tension is a territorial dispute over the oil city of Kirkuk. Masud Barzani, president of Iraqi Kurdistan, calls al-Maliki a "new dictator" and refuses to withdraw his Peshmerga until such time as al-Maliki withdraws the soldiers of the Tigris division, a special unit for the defence of the so-called "disputed territories". So far, neither of the two men has given an inch. 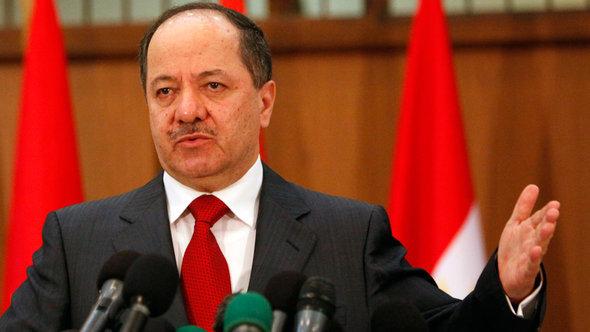 Rebellion against the "new dictator": Masud Barzani, president of Iraqi Kurdistan, is struggling with Iraq's prime minister al-Maliki over the oil wealth of the city of Kirkuk

​​The Kurdish parties, which long held fast to a coalition in al-Maliki's unity government are also on a confrontation course with the Shia prime minister. For this reason, Turkish Prime Minister Recep Tayyip Erdogan stated that Iraq is on the brink of a new civil war. Upon hearing this, Al-Maliki issued a swift rebuke to Erdogan in Ankara, calling on him to focus on the problems in his own country instead of meddling in the politics of his neighbours.

The strings of ethnicity and religion

Commenting on the current situation in Iraq, Ismael Zayer, publisher and editor-in-chief of the Iraqi daily newspaper Al Sabbah al Jadeed says that "al-Maliki has fallen out with everyone at this stage". Criticism of the prime minister is the tie that binds activists from different political camps together. Even Shia clerics from the city of Najaf have shown solidarity with the protesters, while supporters of the Shia preacher Muqtada al-Sadr, whose party is in a coalition government with al-Maliki, have also taken to the streets to protest about the prime minister. So, has the Arab Spring finally arrived in Iraq?

So far, demonstrations have almost exclusively been politically motivated and organised by political parties who are playing on the strings of ethnicity and religion. However, since the bitter experiences of the years 2006 and 2007 and the bloody disputes between Sunnis and Shias, the people of Iraq are no longer willing to follow these parties. In other words, the protest is not supported by broad sections of society.

The conflict surrounding Kirkuk, for example, is a dispute between politicians in Erbil and the central government in Baghdad. Opinion polls in Iraqi Kurdistan show that most of the people who live there do not want to have anything to do with the dispute and feel that the rift with Baghdad is not a good thing. With the demonstrations in Anbar, the Sunni clans there have revoked their pact with al-Maliki's government, which was concluded by the Americans in order to fight al-Qaeda terrorism.

The Sahwa alliance – or "Sons of Iraq", as the US troops called their Sunni allies in the fight against terrorism – no longer exists because al-Maliki refuses to go on making financial contributions. What's more, the political participation that was promised to tribes in exchange for their involvement has not been delivered.

Whether the resentment felt by Sunnis and Kurds will grow and spread beyond the regions and across the country remains to be seen in the coming weeks. If it does, only then will be it possible to speak of an "Arab spring" in Iraq. Various attempts to topple al-Maliki using a vote of no confidence in parliament since the withdrawal of US troops have all failed because the required majority was never reached.

Home
Print
Newsletter
More on this topic
Iraq after the Withdrawal of US Troops: A ''Stable'' Country Teetering on the BrinkSeries of Terrorist Attacks in Iraq: A Culture of ViolenceThe Shia-Sunni Conflict: The Most Deadly Religious War of our Time
Related Topics
Al-Qaida, Arab Spring, Arabellion, Democracy and civil society, Human rights, Iraq War
All Topics

A lot is happening in Syria’s Sweida Governorate – foreign intervention there is unprecedented both in terms of scale and number of actors – yet Damascus remains the dominant ... END_OF_DOCUMENT_TOKEN_TO_BE_REPLACED

When she ascended the throne, millions of Muslims still lived under British rule. Later, Elizabeth II appealed for tolerance in a multi-religious society. She was the first ... END_OF_DOCUMENT_TOKEN_TO_BE_REPLACED

The documentary "The Other Side of the River" shows how women in the Kurdish regions of northern Syria fight for their rights under the most difficult conditions. By Aviva ... END_OF_DOCUMENT_TOKEN_TO_BE_REPLACED

Following months spent considering a military incursion into northern Syria, Turkey now appears to want talks with Syria to ensure security and the return of refugees. From ... END_OF_DOCUMENT_TOKEN_TO_BE_REPLACED

In this essay, renowned Lebanese journalist and writer Hazem Saghieh asks whether the Arab Levant, which stretches from Iraq in the east to Egypt in the west, will remain an ... END_OF_DOCUMENT_TOKEN_TO_BE_REPLACED
Author:
Birgit Svensson
Date:
Mail:
Send via mail

END_OF_DOCUMENT_TOKEN_TO_BE_REPLACED
Social media
and networks
Subscribe to our
newsletter