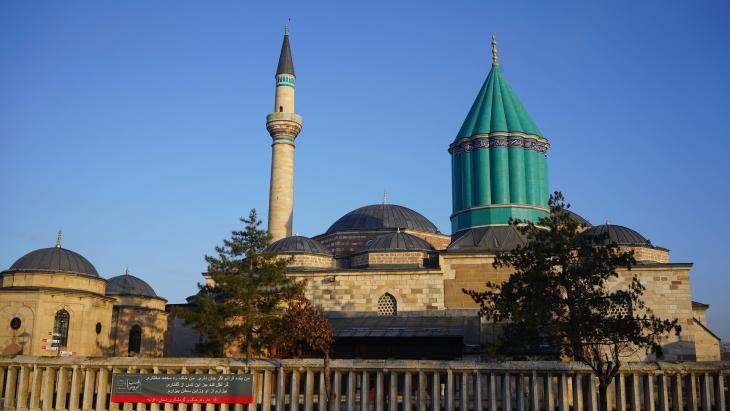 In 1925, Mustafa Kemal Atatürk had the Sufi orders shut down. In modern-day Konya, the city council uses whirling dervishes in its marketing campaigns. Marian Brehmer on Islamic mysticism in Turkey

Konya – one-time capital of the Seljuk Empire and one of the largest cities in Anatolia with a population of over two million – is a complex place. There is hardly any other city in the country, so they whisper to one another in western Turkey, where the people are so strictly religious, so conservative, so "backward".

For many years, the governing AKP's election results in Konya were sky high. In November, Turkey's President Recep Tayyip Erdogan announced at a rally in the city centre that he wanted to invest 18 billion Turkish Lira (around €950 million) in the city for projects that include a new weapons factory.

Yet Konya is also the city of one of world history's most significant emissaries of peace: Mevlana, as the Turks call the famous Sufi master and poet Jalaluddin Rumi, who was born in Balkh in what is now Afghanistan in 1207 and died in Konya in 1273. "Mevlana" is the Turkish spelling of the Arabic honorific mawlana, meaning "our master".

Rumi as a tourist magnet

Mevlana's mausoleum, which for hundreds of years was the training centre and headquarters of the Mevlevi dervish order, is now a magnet for tourists, attracting millions of visitors every year. The şeb-i arus or "wedding night", as the anniversary of Rumi's death has been known for centuries, is one day on which the saint's transnational appeal is particularly evident. Every year, thousands of people from all over the world make the pilgrimage to Konya for the occasion.

Although the prayer ceremony marking the minute of Rumi's death doesn't begin until just after four o'clock in the afternoon, every last centimetre of the carpeted floor in front of the sarcophagus in the inner part of the mausoleum is occupied for hours beforehand. 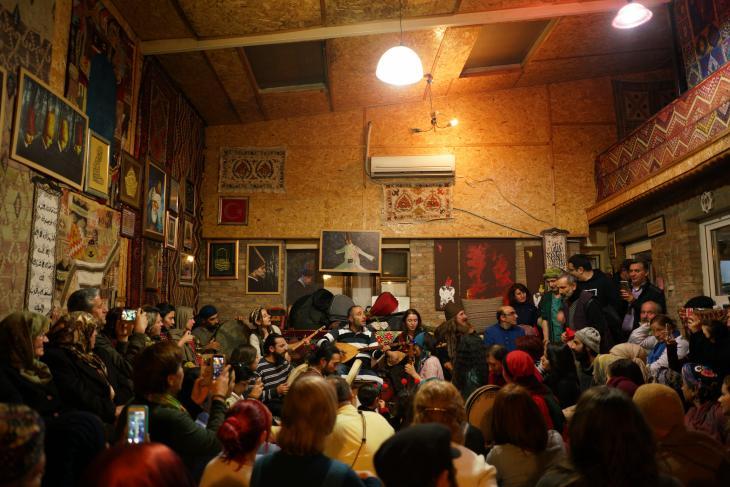 Sufi musicians meet in Konya to mark the anniversary of Rumi's death. Rumi died on 17 December 1283. "The şeb-i arus or 'wedding night', as the anniversary of Rumi's death has been known for centuries, is one day on which the saint's transnational appeal is particularly evident," writes Marian Brehmer. "Every year, thousands of people from all over the world make the pilgrimage to Konya for the occasion"

Some of the visitors chat in small groups – among other languages, you can clearly pick out Turkish, Persian, Arabic and English – while a circle of young Iranians reads from the Divan-e Shams, a Sufi master instructs a flock of avidly-listening schoolchildren, and an older woman murmurs Quran surahs to herself as she sways back and forth. Soon, one of the shrine's guardians, dressed in a beige wool coat, brings out a long lighter and starts lighting the candles in the glass jars above the heads of those waiting.

Festival atmosphere in the city

At 16.05, "Yā Hazret-i Mevlānā" issues from the loudspeakers. Everyone is now on their feet, ready to receive the blessing of this centuries-old ritual. A reading from the Koran follows, a ceremony with prayers and an ecstatic dhikr recitation, which ends in increasingly rapid cries of "Allah". A short while later, the pilgrims leave through the portal in a great crowd, though some linger for a while in silent meditation.

Afterwards, Konya transforms into a festival arena. In various locations around the tomb, in hotels, cultural centres, dergahs (sufi shrines) or in the open air, people sing, pray, recite poetry and commemorate Rumi until late into the night.

One of the most popular gatherings takes place every year in a large hall behind an unprepossessing souvenir shop. The wood-panelled walls are hung with rugs in all manner of colours and patterns. On this night, the music is a mixture of Turkish spiritual folk music and Sufi songs, also called ilahi ("divine") as well as Persian Rumi hymns. 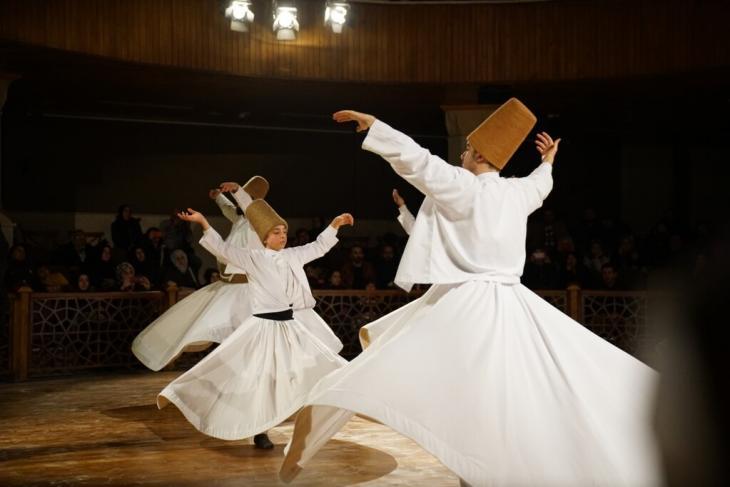 Traditionally, the Mevlevi Order's elaborate sema ceremony "follows a set progression and necessitates a particular posture and placing of the feet" and those who performed it spent several years of training, not only in the actual ceremony but also in ethics, codes of behaviour and beliefs. At the other end of the scale is what some refer to as "lifestyle Sufism", where "whirling" is decoupled from its traditional heritage and mixed with spiritual practices from other cultures

The rhythm is provided by circular frame drums. As the music reaches its climax, a young woman in the audience leaps up and begins to spin around. As she spins, the hem of her brightly-coloured skirt lifts into the air.

Everyone longs for a mystical experience

This young woman's spinning is a spur-of-the-moment thing and has little in common with the Mevlevi Order's elaborate sema ceremony, which follows a set progression and necessitates a particular posture and placing of the feet. Participating in the sema, which has become a kind of showcase for Sufism, traditionally required a long training process consisting of years of kitchen duties and spiritual preparation. But many in the Turkish Sufi scene now argue that mystical ecstasy is an experience for which everyone yearns. It is time, they say, to leave institutions and rules behind.

While today's Mevlevis criticise those who describe the sema – which is now also performed in restaurants or on steamer excursions from Istanbul – as a "dance", people in the West have long spoken of the "whirling dance of the dervishes". Workshops in "whirling" are available in the yoga studios and esoteric centres of major European cities. Decoupling Sufi rituals from their traditional heritage and mixing them with spiritual practices from other cultures is described by some researchers as "lifestyle Sufism".

Revival of religious life in the public sphere

In Turkey, the hunger for spiritual practice is particularly great among those who feel alienated by the increasingly ideological Islam of Turkish politics. The revival of religious life in the public realm under the AKP government over the past 20 years has led to a gradual comeback for the Sufis, to the extent that masters can now address millions on television and are publicly invited to ceremonies.

Today's Turkey is also home to neo-Sufi and ultra-conservative splinter groups of traditional orders like the Menzil community or the Süleymancılar movement, whose leaders used to have close contact to people moving in government circles.

In the Ottoman Empire, the religious practice of large sections of the population was for centuries influenced by Sufi culture. Tekkes or Sufi lodges functioned not only as places of spiritual education, but also as social meeting places, which ran libraries or served charitable purposes. Some mystical brotherhoods such as the the Bektashi Order and the Naqshbandi Order had great social and political influence in the Ottoman Empire, which is why Mustafa Kemal Atatürk regarded the orders as a symbol of backwardness and an obstacle on the country's path to alignment with Europe.

Two years after the founding of the Turkish state, Atatürk closed down the Sufi orders and banned their practices. Some Sufi leaders rejected this move and moved their communities to other former Ottoman states, including Albania and Syria. The Çelebi, or spiritual leader of the Mevlevi – an office which has been handed down from father to son since Rumi's death – initially went to live in Aleppo, where one of the most important mevlevihanes (Sufi centres) had been located under Ottoman rule. Other Sufis joined the Kemalists and took up positions in public service.

A break with the spiritual culture of previous generations

At the same time, the alphabet reform of 1928, in which the Turkish alphabet was switched from Arabic to Latin script, led to a break with the spiritual culture of previous generations. Reading Ottoman Sufi poetry soon became a pursuit reserved only for specialists. Today, hardly anyone in Turkey has access to the Sufis' original works; they first need to be translated into modern Turkish. In recent years, an increasing number of these translations have been completed, with Istanbul publishers such as Sufi Yayinları at the forefront of the effort.

As a result of the ban, many Sufis spent decades underground. Their lodges relinquished their role as spiritual training centres and functioned simply as cultural clubs – for mystical music, for example. Even in Konya, the sema was banned until well into the 1950s. In 1953 it was allowed to take place again as a strictly secular performance in front of an non-participating audience.

Today, by contrast, the city council is using Rumi and the whirling dervishes as a calling card, styling itself the "city of hearts". Konya's advertising video for this year's şeb-i arus invites people to "Become a friend, so that you can look on the [divine] friend." All anyone needs to do to comprehend that it isn't as simple as a YouTube video might suggest is take a look at Rumi's teachings or the strict training practice of the Mevlevis.

Short movies nominated for an Oscar often don't get wide public attention. But when one is about an Iranian girl seeking freedom from male domination by taking off her veil, ... END_OF_DOCUMENT_TOKEN_TO_BE_REPLACED

World-famous Iranian film director Jafar Panahi has been incarcerated for several months, even though Iran's Supreme Court overturned the verdict against him. Now, he has gone on ... END_OF_DOCUMENT_TOKEN_TO_BE_REPLACED

Young women are driving forward the protests against the Iranian regime, which have been going on for months. Literature provides clues as to why that should be, and why the ... END_OF_DOCUMENT_TOKEN_TO_BE_REPLACED

Visiting the country of her parents, murdered by the Iranian regime in 1998, German-Iranian artist Parastou Forouhar finds a changed society: hopeful, strong and courageous, ... END_OF_DOCUMENT_TOKEN_TO_BE_REPLACED

Ballet performances are prohibited in Iran. In her film "1001 Nights Apart", director Sarvnaz Alambeigi documents the history of dance in the Islamic Republic. By Fahimeh Farsaie END_OF_DOCUMENT_TOKEN_TO_BE_REPLACED

END_OF_DOCUMENT_TOKEN_TO_BE_REPLACED
Social media
and networks
Subscribe to our
newsletter