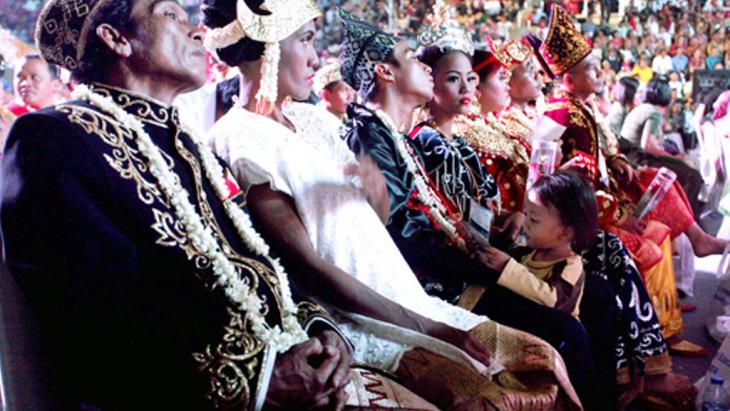 Marriage in Indonesia
Act of bravery

Marriage is highly regarded in Indonesian society and divorce can be a strong stigma for both women and men. Nonetheless, the number of divorces is rising and the government has now regulated issues of alimony and child care. By Edith Koesoemawiria

Statistics from the High Court of Religious Affairs, which has jurisdiction only over Muslim citizens, show that 251,208 marriages were dissolved in 2010. The numbers rose to 382,231 cases in 2014. The Muslim population makes up about 90 % of Indonesia′s 250 million people. It is striking that, on average, more than one thousand Muslim marriages are now divorced every day.

Media report these matters and spell out warnings about permissive and liberal lifestyles. Workshops and seminars are held – mostly for women – on how to save marriages. There is a lot of self-help marriage advice in print media and on the Internet.

Marriage is being vehemently promoted from many sides. That includes the polygamous Muslim variety that allows men to have up to four wives. For a long time, polygamy was considered pre-modern and politically incorrect, so members of the civil service are not permitted to opt for it. Women′s rights groups oppose polygamy too, but the traditional practice is nonetheless becoming more popular.

Several counties offer dates for mass weddings. They say that many couples could otherwise not afford to pay the administration fees to marry. This trend seems to be related to growing conservatism, but there is no solid data.

Most Indonesians are religious. Marriage has always been regarded highly by the vast majority, often to a point where couples who divorce are stigmatised even if they have no children. Even today, many middle-class women still prefer to maintain their married status, even when the marriage has become a farce.

In Indonesia, it is still an act of bravery for a woman to ask for divorce. Divorce negatively affects a man′s reputation too, but not to the same extent. Asosiasi Advokasi Perempuan, a woman′s advocacy association, reports that even in cases of marital violence, most women leave their men only for short periods and then come back to try anew. Often, that happens several times. According to the non-governmental organisation, women return to their marriages up to eight times before they decide to finally end the broken relationship.

Financial concerns are the most cited reason for divorce in Indonesia, above infidelity and sexual problems, with the inability to reproduce or the overabundance of children being core issues. Lack of communication appears to be the last reason to dissolve the formal union.

Research done by the Ministry of Religion in recent years found that the highest number of divorce cases occurred in the regions of Aceh, Padang, Cilegon, Indramayu, Pekalongan, Banyuwangi and Ambon. Labour migration was indicated as an important reason. Financially securing a future for oneself and one′s family is a priority for the Indonesian majority, as it is for most people around the world.

In view of high unemployment and constantly rising prices, many Indonesians search more lucrative employment abroad. This applies to blue and white collar jobs. Distance then takes its toll on families. In very rare cases, a man who lives in Indonesia has four wives who work abroad and send their savings home. At some point, divorce becomes unavoidable.

Two other trends that add to the rise of divorce rates are pop culture and growing sex tourism. Regarding the former, the Ministry of Religious Affairs warns it is wrong to copy the model of TV soap operas, with young and inexperienced couples marrying as if a wedding was a form of dating. On the other hand, tourists ″marry″ and sexually exploit ″wives″ for a limited time. In the eyes of religious communities, however, such marriages can appear valid for the time being and the women are shamed after their tourist ″husband″ leaves. It is obvious, of course, that this is a form of prostitution.

Important issues regarding divorce, including the payment of alimony and child care, have been regulated by the government. However, the rule of law is weak in Indonesia and laws are often not enforced, so the divorced parties′ personal sense of responsibility matters very much.

Both sexes can legally apply for a divorce, be it through Islamic or state courts. Regulation and procedures for divorce can be found online, with women and legal non-governmental organisations taking the forefront in disseminating information and advocacy. Albeit still looked down upon, the option of divorce is a reality in contemporary Indonesia. It fits into the daily life of mainstream society, though not necessarily into its conservative worldview.

Home
Print
Newsletter
More on this topic
Democracy and human rights in Indonesia: A blocked constitutional stateInterview with Fritz Schulze: "Islam is deeply rooted in Indonesian democracy"Laksmi Pamuntjak′s novel "The Question of Red": The silence is broken
Related Topics
Gender, Human rights, Islam and the West, Islam in Southeast Asia, Islamic lifestyle, Muslim women, Sexism and violence against women, Women in the Islamic world
All Topics

Indonesia has become a primary battleground between democratic and autocratic visions of Islam in the 21st century, with Nahdlatul Ulama pitted against Abdullah bin Bayyah, a ... END_OF_DOCUMENT_TOKEN_TO_BE_REPLACED

Research project "The Global Qur'an", brainchild of Professor of Islamic Studies Johanna Pink and sponsored by the European Research Council, analyses the history and ... END_OF_DOCUMENT_TOKEN_TO_BE_REPLACED

At a time when even some rich democracies are electing con men as their political leaders, the success of Indonesian President Joko Widodo deserves wider acclaim and appreciation ... END_OF_DOCUMENT_TOKEN_TO_BE_REPLACED

On the Indonesian island of Java, one librarian has started a mobile library, lending books to children in exchange for plastic rubbish. The idea is that they will learn to take ... END_OF_DOCUMENT_TOKEN_TO_BE_REPLACED

END_OF_DOCUMENT_TOKEN_TO_BE_REPLACED
Social media
and networks
Subscribe to our
newsletter