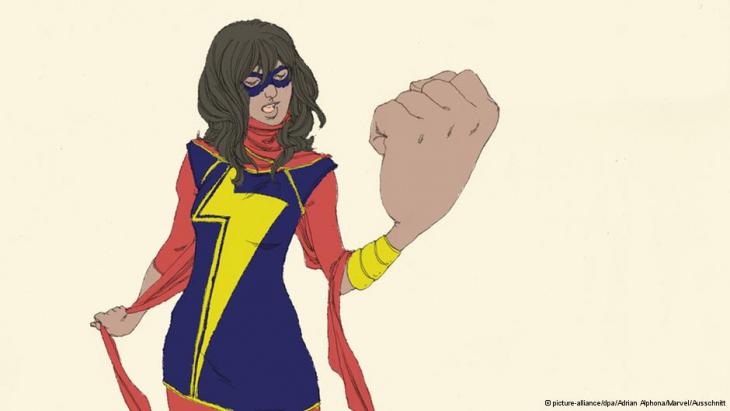 A pubescent Muslim immigrant girl in the USA endowed with super powers? Only in the wonderful world of comics! Great things are expected of the small girl from New Jersey with the large "S" on her chest. By Rachel Baig

Kamala Khan is no average Muslim teenager. The pubescent daughter of a Pakistani immigrant family is in the middle of a complex identity crisis. Luckily, she possesses superhero powers and can alter her shape. No surprise considering that Kamala is the latest superhero to appear in a comic by the American publishing house Marvel Comics. Starting this February, she will assume the mantle of Ms Marvel in a new comic book series.

The character was created by Marvel editors Sana Amanat and Steve Wacker, who came up with the idea after Amanat related anecdotes about her Muslim-American childhood. The author of the comic series is G. Willow Wilson, who was enthusiastic about the project from the very start. "I wanted Ms Marvel to be realistic, a figure with whom young women in particular can identify," she says when asked about the development of the character. "I also drew heavily on my own experiences as a teenager."

Superhero struggling with her own identity 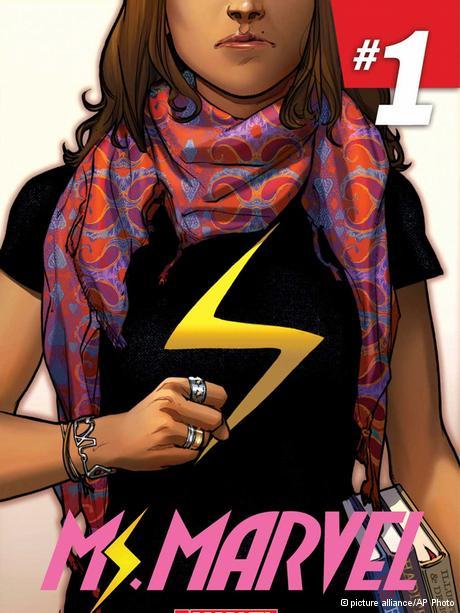 She may not be the first teenage superheroine in a comic or even the first Muslim superheroine in print, but Kamala Khan is certainly a rarity: a 16-year-old Muslim from an immigrant family in the United States who is in the middle of a complex identity crisis

As a 16-year-old from a multicultural background, Kamala Khan faces more than the usual problems encountered during puberty, she also has to deal with the friction that comes from not conforming to cultural and religious norms. Her archconservative brother, for instance, doesn't want her to combine tradition with a modern lifestyle. And then there is her mother, whose biggest worry is that her daughter will meet some boy and get pregnant. "Like many immigrant children, she feels torn between two worlds – the family she loves, but that drives her insane, and her friends, who don't really understand her family life," says Wilson.

In addition to typical teenager problems, the comic also addresses the difficulties facing Muslims in the USA today. Since 9/11, they have had to struggle with many prejudices.

Until now, only a few details about the new superheroine and the comic book's title page have been leaked. The cover portrays a sporty young woman. She wears a black T-shirt emblazoned with a stylised "S" that looks like a lightning bolt. She is clutching some schoolbooks under her left arm, while her right hand is clenched into a fist.

She wears a colourful scarf around her neck. Her long, brown hair is uncovered. According to Wilson, this is meant to reflect the fact than many Muslim women in America do not wear headscarves. "Kamala Khan is not as portrayed as provocatively or tantalisingly as her predecessors, but instead corresponds more to the image of a teenage idol popular in the USA," says Sabine Schiffer, an expert on media at the Institute for Media Responsibility in Erlangen.

Holding a mirror up to reality

On the one hand, Kamala Khan continues a comic book tradition; on the other, she also shows how heroes have changed to keep pace with the times. "There is quite an expectation that she will reflect the diversity of society, while being able to contradict stereotypes," says Schiffer.

Andrea Schlosser, who specialises in American studies and the representation of ethnic minorities in the media in the USA, also believes that comics are a mirror of reality.

"One could conclude that comics provide the young reader with an identity model," says Schlosser. "Furthermore, you can also draw parallels to reality. Kamala could also be a play on words and refer to the real-life Malala Yousafzai, who was nominated for the Nobel Peace Prize last year." 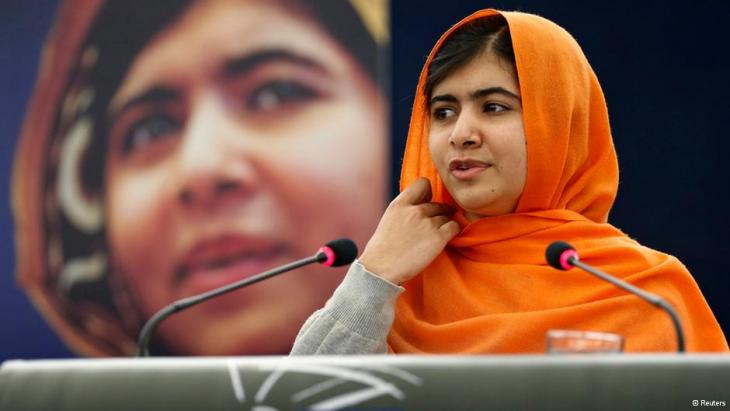 Inspired by a real-life heroine? According to Andrea Schlosser, the name Kamala could be a play on words and refer to the teenage Pakistani campaigner for girls' education, Malala Yousafzai (pictured here)

Not the first superheroine to break the mould

Kamala Khan is not the first female superhero confronted with traditional stereotypes and gender norms. In addition to Wonder Woman and Catwoman, the X-Men series has also highlighted the role of women. This is not the first time that Marvel Comics has attempted to promote a Muslim female superhero. In 2002, it introduced the veiled Sooraya Qadir, code-named "Dust," to its X-Men universe. Her superpower consisted of being able to disappear into thin air. "That is not particularly flattering. First of all, because she is a woman and women are already underrepresented in comics. In addition, there is the general view in society that women, especially Muslim women, are marginalised," says Schlosser.

Last year saw the introduction of a Pakistani cartoon series named "Burka Avenger," in which a young female teacher fights against misogyny and corruption in her society. However, she wears a burqa as her disguise, and the cartoon is considerably more political than Kamala Khan as Ms Marvel.

Both experts hope that the comic won't contain any stereotypical plots. "It remains to be seen whether stereotypes will pop up in the plots or the way the comic book figure is represented," says Andrea Schlosser. Sabine Schiffer believes that there will be more stereotypes than expected, but hopes that, apart from the superhero exploits, the stories will also portray more normality.

Calls for a free Kashmir are becoming louder on both sides of the divided region. Can the German reunification model be applied to the India- and Pakistan-ruled Kashmirs? And what ... END_OF_DOCUMENT_TOKEN_TO_BE_REPLACED

Indiaʹs constitution prohibits discrimination on the basis of religion, but the government of Prime Minister Narendra Modi does not care. Run by Hindu-supremacists, it is ... END_OF_DOCUMENT_TOKEN_TO_BE_REPLACED

Using a combination of poetry and narrative, Pakistani poet Yusra Amjad talks about her compatriots' perception of the institution of marriage. END_OF_DOCUMENT_TOKEN_TO_BE_REPLACED

Abu Dhabi and Riyadh see a natural partnership with Modi’s government, a co-operation that could change the dynamics of the South Asian-Gulf nexus. By Jean-Loup Samaan END_OF_DOCUMENT_TOKEN_TO_BE_REPLACED

To many the name of Pakistan calls up images of Islamic extremism, religious intolerance, state corruption and the long years of terror. It’s probably safe to say that single malt ... END_OF_DOCUMENT_TOKEN_TO_BE_REPLACED