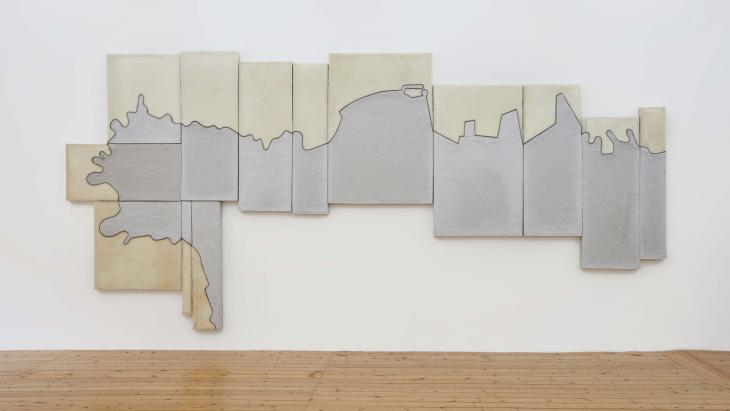 The work of artist Marwan Rechmaoui is both minimalist and complex and embodies the faultlines of his home city. Some of his latest pieces are now on show at a leading Beirut gallery – its first exhibition since the explosion that rocked the city last summer. By Lena Bopp

When Marwan Rechmaoui goes in search of material for his work, he always finds it in the city: concrete, cement, wire, wood, ceramic. Time and again, he comes across aluminium and metal – a huge amount of which was left lying around in the Sfeir-Semler Gallery in the aftermath of the Beirut port explosion in August 2020. The force of the blast had shredded the plaster dividing walls, crumpled their metal supports and swept away the aluminium frames of the shattered windows. Just like half the city, the gallery was reduced to rubble. And Marwan Rechmaoui began to sift through the chaos. He sorted the metal and aluminium in size order, stacked the irreversibly malformed pieces into a pile that was soon the height of a man and considered the material for a few months.

Then – which is remarkably fast for Rechmaoui, who often works on his pieces for years – he became so used to the sight of the aluminium struts that he left them in the blasted state he found them, simply composing them in a way that took away the horror.

Now they’re on show in the first post-explosion exhibition at Andrée Sfeir-Semler’s gallery. The title – "But the trees kept voting for the axe" – is a wonderful metaphor for the country's current situation: after all, at least some of crises Lebanon is experiencing are undeniably homegrown. Corruption and negligence played no small part in the events leading up to the explosion. The aluminium struts that now hang on the wall, arranged in tight rows like dull windows and turning in the wind like mobiles, recall the disaster.

There’s a clever arrangement of suitcase-sized, identically-shaped blocks. To make them, Rechmaoui used a machine to compress the twisted metal remains of the gallery. Like people on the run, they traverse the space, moving towards the picture on the wall "Beirut by the Sea" and undeterred, continue their journey on the other side of the wall. Arrival and departure, immigration and emigration – the references to contemporary Beirut, a city so tormented that more people than ever are seeking salvation elsewhere, are as diverse as those that refer to its history, also defined by parallel waves of migration and immigration. 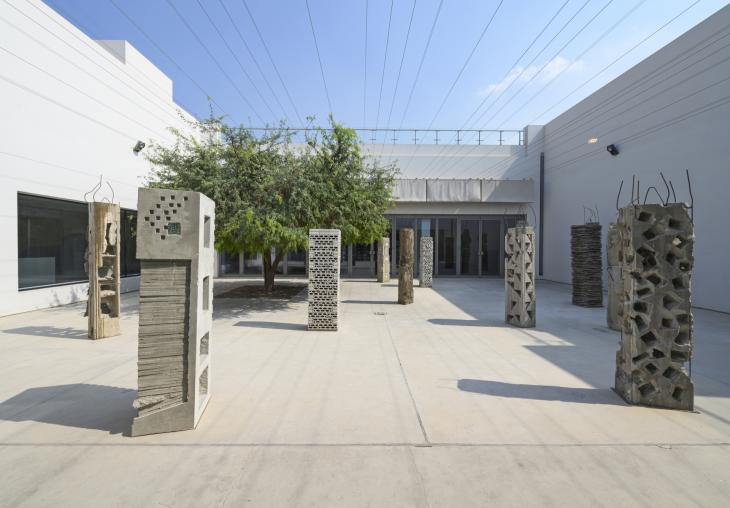 Beirut's fractured complexity: "The two-metre, square pillars made of cement, into which Rechmaoui has incorporated all manner of bycatch from raffia chairs, through television sets to ceramic tiles, leaving some openings and visual axes void, are like houses telling the stories of their city: of Syrian construction workers who live on the sites where they work; of nature reclaiming abandoned buildings; of open staircases where neighbours meet in summer, because the breeze wafts so pleasantly through them," writes Lena Bopp

But it still feels too soon to sing the city’s requiem. Although the face of the city has changed within a short time due to the poverty and hunger of the many Lebanese affected by the country’s economic meltdown, it is not certain how this decline will continue. It is true that many artists are trying to leave the country. And there are ways and means to do this. For example, the French embassy has just launched a programme with residencies for 100 artists. But it is questionable whether the creative, comparatively free regional centre of Beirut will be so easy to replace.

Andree Sfeir-Semler’s gallery had set a high bar for contemporary, political art in the city for more than a decade. Now, rather than relocating to Dubai, which according to recent media reports has been offering itself as a new home to Lebanese artists, she has rebuilt the Beirut branch of her Hamburg gallery. "In Beirut there’s old and new, crooked and bent, there are things here that’ll inspire you from morning to night," she says. Marwan Rechmaoui is similarly dismissive: "There’s nothing to challenge you in Dubai. If you want to make money, go there. If you want to have ideas, don’t."

It would be difficult to imagine Marwan Rechmaoui anywhere else but Beirut. After all, his work has for decades focused on the city where he was born in 1964. Like other artists of his generation, such as Walid Raad, Akram Zaatari and Rabih Mroue, he is heavily influenced by the post-war period, by the reconstruction of the 1990s, which paradoxically went hand-in-hand with the destruction of the old centre of Beirut, its old souk razed to the ground and replaced by a sleek shopping quarter empty of people. Rechmaoui always has a very distinct way of approaching the city. Not just in his choice of materials.

His methodology is also down-to-earth in the sense that he has walked, photographed and mapped all neighbourhoods, whereby he seeks to capture the many religious, social and cultural faultlines just as much as the genealogical, geographical and historical layers. From the resulting complexity, and therein lies his art, he distils works that are often minimalistic, but show that fissured, multidimensional character that defines Beirut.

This is especially apparent in his "Pillars", recently exhibited in Amsterdam and Sharjah and now on show for the first time in Beirut. His original plan was to make just a few of them, but that number has since grown to more than 40. The two-metre, square pillars made of cement, into which Rechmaoui has incorporated all manner of bycatch from raffia chairs, through television sets to ceramic tiles, leaving some openings and visual axes void, are like houses telling the stories of their city: of Syrian construction workers who live on the sites where they work; of nature reclaiming abandoned buildings; of open staircases where neighbours meet in summer, because the breeze wafts so pleasantly through them.

The fragility of these pillars is likely to appear familiar to Beirut viewers, who will discover in them many more vernacular references: among them, those that point beyond the city to a region that has been so violently rocked to its very foundations in recent years. (Prices from 15,000 to 300,000 U.S. dollars.)

One month after the Beirut port explosion: "We sweep trauma under the carpet and carry on"

Novelist and critic Elias Khoury: The nightmare of reality

Beirut in crisis: Can things get any worse for the people of Lebanon?

Aftermath of the Beirut explosion: Lebanon, a state in freefall thanks to corrupt governance

Former lawyer Said Haider has invented a chatbot for those seeking advice on anti-discrimination issues – Meta is the first chatbot of its kind in the world. In conversation with ... END_OF_DOCUMENT_TOKEN_TO_BE_REPLACED

Benjamin Idriz, imam of the mosque in Penzberg near Munich, is one of the most prominent representatives of Islam in Germany. He sees his role as building bridges to mainstream ... END_OF_DOCUMENT_TOKEN_TO_BE_REPLACED

In view of the catastrophic supply situation in Afghanistan, UN authorities are sounding the alarm. Inflation and growing poverty are exacerbating the situation. The Taliban ... END_OF_DOCUMENT_TOKEN_TO_BE_REPLACED

For Western listeners, the sound of the sitar is perhaps the most cliched musical symbol of India. Sitar player Hindol Deb, who lives in Cologne, Germany, has just released his ... END_OF_DOCUMENT_TOKEN_TO_BE_REPLACED

Since the German city of Cologne launched a two-year model project to allow Muslim communities to perform the call to prayer, there has been much heated public debate on the issue ... END_OF_DOCUMENT_TOKEN_TO_BE_REPLACED
Author:
Lena Bopp
Date:
Mail:
Send via mail

END_OF_DOCUMENT_TOKEN_TO_BE_REPLACED
Social media
and networks
Subscribe to our
newsletter