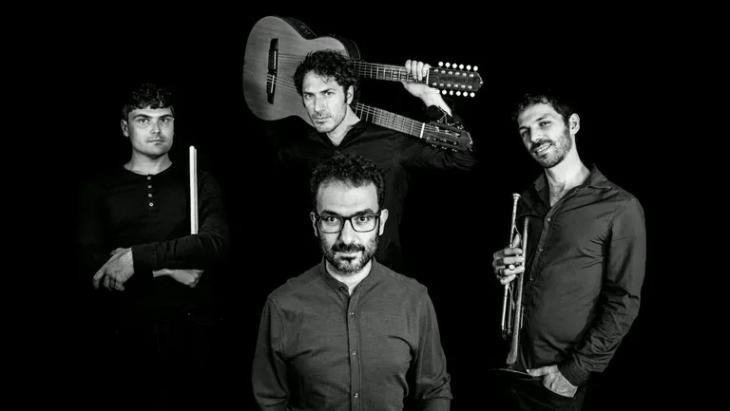 "Masaa"
A fence turns to water

On their fourth CD "Irade" (willpower), Masaa has left its piano sound behind, yet continues with its new guitarist to pursue a path that bridges jazz improvisation and Arabic sounds. By Stefan Franzen

"A fence protects people. People protect the fence. A fence protects a fence. It comes to touch people, to transform people." These are the unusual opening lines, recited in Arabic, of the new Masaa album "Irade". They continue: "Your fence is clear water, your fence is light and shadow, and that is all joy." In a world in which the general political climate is predisposed towards the setting up of walls and fences, these are very optimistic verses.

"I like to look for meaning in things that already exist. When you demonise something, you can become so embittered that it is no longer possible to get over it," said Rabih Lahoud in an interview with Qantara.de.

"I often think about why people very frequently exclude others. And I see this happening in Germany, too. But then I can remember to see the people behind such acts. People who exclude others are also people. And I try not to let myself get bitter or judge them as being contemptible. In this way, the act of exclusion can be transformed – it should flow, so that it drifts away, runs its course, and forges ahead, just like water."

Lahoud has already distinguished himself on the group’s last three albums as an expressive and multilingual poet. He manages to underscore issues with short, incisive utterances, providing the listener with ample food for thought. His approach to poetry has literally "condensed" itself once more on "Irade". Similar to the haiku, the Japanese highly concise form of poetry, his words float in space surrounded by long, wordless passages and his sensitive, soulful voice.

The path to this new work was far from straightforward. Masaa first had to absorb the loss of Clemens Poetzsch on piano and then had to reform the group. "It came as a great surprise to us," recalls trumpeter Marcus Rust on the departure of their keyboardist.

The three remaining musicians, Lahoud, Rust and the drummer Demian Kappenstein, deliberated together on how they should move forward. A new pianist would only invite comparisons with the previous one. And so the choice fell on an old acquaintance, the guitarist Reentko Dirks, who had always raved about Masaa being his favourite band as well as having had previous experience with oriental music.

"His guitar has two necks," explains Rust. "This gives him other performance options, like playing quarter tones, for example, and it can sound like an oud or even a bass." The continuing members all agree that Dirks reflects the spirit of the band to connect disparate elements, like the "maqam", the scale system used in Arabic music, with the power of flamenco and intimate lyrical ideas.

Turkish author and journalist Mustafa Akyol is one of the foremost pioneers of an Islam reconciled with modernity. Musa Bagrac spoke with Akyol for Qantara.de about his new book " ... END_OF_DOCUMENT_TOKEN_TO_BE_REPLACED

A bird's eye view of eight hundred years of history: Brian A. Catlos tells the story of Al-Andalus in the style of a streaming series and deconstructs the myths of the Reconquista ... END_OF_DOCUMENT_TOKEN_TO_BE_REPLACED

Known to Jews, Muslims, and Christians by three different names – Sefarad, al-Andalus, and Hispania, respectively – the Iberian Peninsula has been a centre of fertile intellectual ... END_OF_DOCUMENT_TOKEN_TO_BE_REPLACED

A heated debate is raging in the Islamic world about whether the religious and political spheres in Islam are one and the same. Before this matter can be settled, the terms " ... END_OF_DOCUMENT_TOKEN_TO_BE_REPLACED

Muhyiddin Ibn Arabi (1165-1240) is one of the most influential Arab philosophers and mystics. James Morris, Professor of Islamic Theology at Boston College, explains why his ... END_OF_DOCUMENT_TOKEN_TO_BE_REPLACED

Internationally Bamiyan tends to be associated with the tragedy surrounding its empty Buddha niches. But in recent years the central Afghan province has also been an island of ... END_OF_DOCUMENT_TOKEN_TO_BE_REPLACED
Author:
Stefan Franzen
Date:
Mail:
Send via mail

END_OF_DOCUMENT_TOKEN_TO_BE_REPLACED
Social media
and networks
Subscribe to our
newsletter