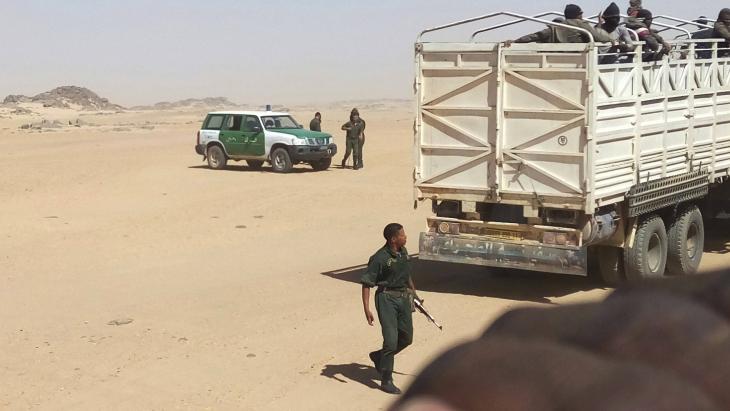 Now that the COVID-19 crisis in Algeria has eased significantly, Algerian authorities are once again cracking down on migrants with extreme severity, expelling thousands of people to Niger in a blatant violation of international law. By Sofian Philip Naceur

Since 2017, Algeria has been systematically cracking down on refugees and migrants living in the country, deporting hundreds of people every week to its southern neighbour Niger in what can only be described as mass expulsions. Although Algeria's government temporarily restricted its actions against refugees and migrants in March in the light of the health crisis, the deportations to Niger never actually stopped completely.

In late September, Algerian authorities resumed their highly controversial mass expulsions to Niger on a large scale. According to the activist network Alarme Phone Sahara, over the course of only 17 days, at least 5,291 people from 22 African countries and Pakistan were deported to Niger, including 409 women and 807 minors.

Some 3,078 of them were expelled in four so-called "official" convoys. The remaining 2,213 people were deported in four "unofficial" convoys, which meant they were abandoned about 15 kilometres from the border in the middle of the desert and forced to leave the country on foot and head for Assamaka – a small town on the Nigerien side of the border.

Expulsions where Algeria coordinates operations with Niger, handing over deported people to the Nigerien army, are termed "official" whereas deportations that are conducted without consultation with Niger are deemed "unofficial".

Algeria's expulsion policy is based on a 2014 bilateral readmission agreement between the governments in Algiers and Niamey. The exact content of the agreement has never been made public. Nor is it clear whether the deal is a written agreement or only an oral arrangement. What is certain, however, is that the deal only relates to the deportation of Nigerien citizens. 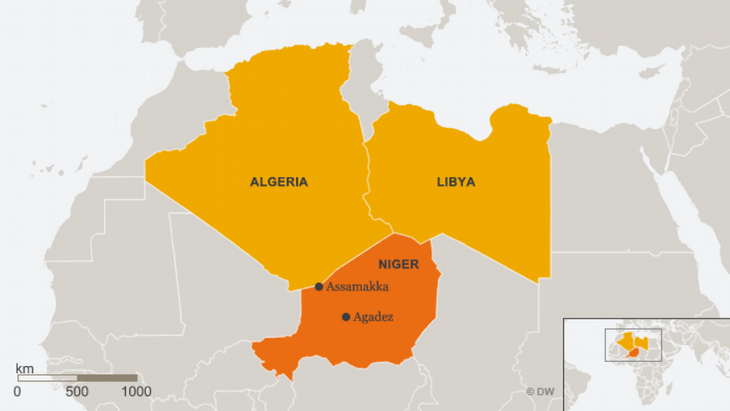 Map showing Niger and neighbouring Algeria and Libya. Many Africans seeking a new life in Europe cross from Niger into Algeria or Libya. "In late September, Algerian authorities resumed their highly controversial mass expulsions to Niger on a large scale. According to the activist network Alarme Phone Sahara, over the course of only 17 days, at least 5,291 people from 22 African countries and Pakistan were deported to Niger, including 409 women and 807 minors," writes Sofian Philip Naceur

To this day, however, Algeria has only partially adhered to the agreement, systematically deporting to Niger people from countless African countries in "unofficial" convoys. In the past, Algeria has also expelled people from Syria, Yemen, Palestine and Bangladesh to its southern neighbour. In recent years, the government in Niamey has vehemently objected to the deportation of non-Nigerien citizens to Niger. Algeria, however, has consistently ignored these complaints.

After the deal was concluded in 2014, Algerian authorities initially only sporadically deported Nigerien citizens to the border area. Three years later, however, it massively expanded its expulsion scheme. Ever since, Algerian security forces have been staging almost weekly raids on construction sites or in urban areas with high immigrant populations, arresting immigrants who are suspected of living illegally in the country in blatant disregard for international refugee and human rights conventions.

After being detained for up to several weeks, they are transferred in bus convoys to the city of Tamanrasset, which is about 2,000 kilometres south of Algiers, where they are temporarily housed in a run-down transit centre before being brought to the border area in military trucks and subsequently deported to Niger.

Since 2017, UN authorities and human rights activists have repeatedly slammed the Algerian government for its repressive actions against immigrants. These critics include the international human rights organisation Human Rights Watch (HRW), which strongly condemned Algeria's latest expulsion campaign to Niger in a statement published in early October.

"Algeria is entitled to protect its borders, but not to arbitrarily detain and collectively expel migrants, including children and asylum seekers, without a trace of due process," the statement reads. According to HRW, raids against immigrants have been staged in at least nine cities across the country since late September, in which "security personnel have separated children from their families during mass arrests, stripped migrants and asylum seekers of their belongings, and failed to allow them to challenge their removal or screen them for refugee status."

Time and again, people caught up in such arrest and expulsion campaigns have told international media or aid and human rights organisations working in Niger that they were imprisoned for weeks prior to their deportation. They also tell of being subjected to beatings and other forms of violence by members of the Algerian security forces. They say that after such arrests, Algerian officials not only confiscate valuables such as cash and smartphones, they sometimes even strip immigrants of their shoes. Recently expelled people have also told HRW that during these round-ups, Algerian officials took away their official documents – such as working permits or passports – sometimes even destroying them deliberately.

It remains unclear where and to what extent Algeria detains migrants and refugees. According to the Global Detention Project, a Geneva-based NGO that documents detention practices against non-citizens in numerous countries, Algerian authorities run detention facilities specifically for immigrants and foreigners in Algiers, Blida, Oran, Reggane and Tamanrasset.

People who were expelled or who fled to neighbouring Tunisia or Niger have repeatedly reported that they were detained in Algerian police stations. It remains unclear what policy Algeria is pursuing regarding immigrant detention because the government in Algiers is keeping a low profile in this regard and does not provide official information about imprisoned migrants.

Meanwhile, Algerian authorities are even cracking down on asylum seekers. Following a request for information, the Algeria office of the UN refugee agency UNHCR confirmed that "more than 80" asylum seekers have been arrested and deported to Niger since late September. Since January, more than 100 asylum seekers registered with UNHCR have been deported.

"UNHCR is deeply concerned about the arrest and collective expulsion of asylum seekers and migrants," the UNHCR's Algiers office External Relations Officer, Russell Fraser, told Qantara.de. Fraser confirmed that in recent weeks, 14 people who were registered with UNHCR's Algeria branch were released from detention after the agency intervened on their behalf.

In early October, Algeria's Minister of the Interior, Kamel Beldjoud, announced that the Algerian government had adopted a national strategy to combat irregular migration, which – according to him – strictly adheres to the international conventions signed and ratified by Algeria and respects human rights. Reality, however, tells a very different story. In a statement, the activist network Alarme Phone Sahara recently called the new measures announced by Beldjoud a "declaration of war against migrants" that, among other things, seeks to satisfy racist sentiments towards African immigrants in Algerian society.

The network went on to say that Algeria is indirectly positioning itself "as a reliable guardian for the border regime" of EU states by pursuing its repressive expulsion policy towards migrants. It also highlighted that while Algeria has not yet signed any official migration agreement with the EU, EU countries have been supplying Algerian military and police forces with military and security goods such as surveillance technology or Mercedes-Benz vehicles on a large scale for years.

Sultana Khaya, 41, has been peacefully resisting the Moroccan occupation of Western Sahara for many years. Because of her campaign to assert the self-determination of the Sahrawi ... END_OF_DOCUMENT_TOKEN_TO_BE_REPLACED

Since Spain abandoned its traditional neutrality towards the conflict in Western Sahara, Morocco has announced a "new phase" in relations between the two countries. But what is ... END_OF_DOCUMENT_TOKEN_TO_BE_REPLACED

An increasing number of government ministries in Algeria are announcing they will abandon French in future. They may be reacting to the mood among the population, but the move is ... END_OF_DOCUMENT_TOKEN_TO_BE_REPLACED

Russia's ranking on the World Press Freedom Index has fallen again over the Kremlin's wartime censorship of the Ukraine conflict. From Myanmar to Mexico, journalists continue to ... END_OF_DOCUMENT_TOKEN_TO_BE_REPLACED

"Aboogi", on the City Slang label, is the latest release from Imarhan. Hailing from southern Algeria, Imarhan are one of the many bands that have emerged from the Tameshek ... END_OF_DOCUMENT_TOKEN_TO_BE_REPLACED

END_OF_DOCUMENT_TOKEN_TO_BE_REPLACED
Social media
and networks
Subscribe to our
newsletter