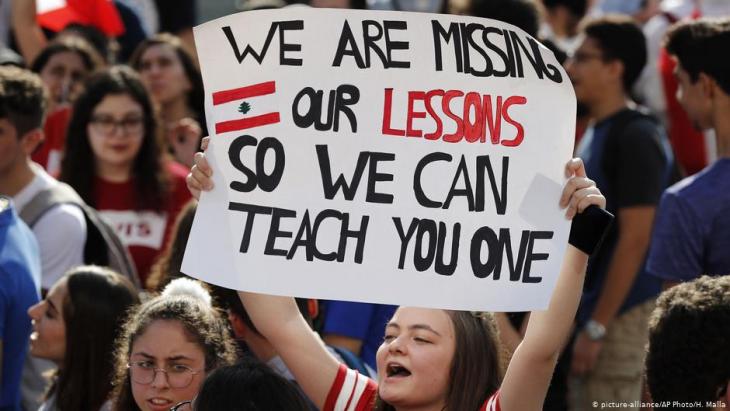 Nearly a decade after the Arab Spring fizzled out, a new wave of protests has swept across the Middle East and North Africa. What is different this time – and will the protesters get what they want? By Marwan Muasher

Many believe the Arab Spring that began with the self-immolation of a Tunisian fruit vendor in 2010 ended in failure. Since 2013, with the exception of Tunisia, autocrats have kept or regained control across the Arab world.

The resurgent anti-democratic regimes then tarnished the protesters by claiming that it was a Western conspiracy that led people to the streets in Tripoli, Manama, Tahrir Square in Cairo, and all across the region. But the continued absence of political and economic opportunity in the Middle East did not abate.

Now, national protests happening in Algeria, Lebanon and Sudan are heralding a new season of civil unrest and calls for democracy in the Middle East.

The first Arab Spring ended in 2013 for two reasons: either because Arab governments quashed the protests with force, money, or both; or because the Arab public saw what happened in Libya, Syria, and Yemen and did not want their own situation to deteriorate into civil war. But the problems that created the protests did not disappear, only the protesters themselves.

And when oil prices declined in 2014, many governments in the Arab world lost an effective tool to mollify their citizens’ economic grievances. Despite nearly being toppled, most of them still have not internalised that the rentier system that keeps them in power, backed by high oil prices and patronage underpinnings, is no longer viable.

Arab governments who clung to power may have thought they weathered the storm and were safe. But today’s protests show that they didn’t make good use of their reprieve. There were no political reforms to make systems more inclusive and no economic reforms to address corruption, improve governance or create jobs. The problems continued – and they have now led a wiser group of protesters back to the streets.
The new wave – an Arab Spring 2.0 – is focussed on the same issues. But protesters have learned from their mistakes and are seeking new goals and using new means to achieve real, lasting, regional changes. But what is different this time? And will those differences change the outcome?

Home
Print
Newsletter
More on this topic
Unrest in the Arab world: The genie is out of the bottleThe Arab Spring and the "Spring of Nations": Failed revolutionaries?Authoritarian reinstatement in the Arab world: Whatʹs left of the Arab Spring
Related Topics
Arab Spring, Arabellion, Democracy and civil society, Economy, Education, Free speech and censorship, Hezbollah, Human rights, Islam and democracy, Oil, Sunni-Shia tension
All Topics

"The people aren’t ready for democracy" has been the constitutional basis for Arab tyranny, its favourite slogan and its sacred narrative for more than a century. Yet, asks Khaled ... END_OF_DOCUMENT_TOKEN_TO_BE_REPLACED

As current events continue to remind us, people all over the world are constantly being forced into exile. "Songs of Exile", created by Algerian Berber exile Abderrahmane Abdelli ... END_OF_DOCUMENT_TOKEN_TO_BE_REPLACED

A new survey by Arab Barometer adds numbers to the narrative that COVID has led to a harsher reality for women in the Middle East and North Africa. By Jennifer Holleis and Razan ... END_OF_DOCUMENT_TOKEN_TO_BE_REPLACED

Algerian scholar Said Djabelkhir rejects the charge of "offending Islam". In interview with Ismail Assam, he maintains that he has been wilfully misconstrued. At the same time, he ... END_OF_DOCUMENT_TOKEN_TO_BE_REPLACED

The Libya Conference will be held in Berlin on 23 June. Much has been achieved since the last Libya Conference in Berlin in January 2020. The ceasefire is holding, there is a ... END_OF_DOCUMENT_TOKEN_TO_BE_REPLACED
Author:
Marwan Muasher
Date:
Mail:
Send via mail

END_OF_DOCUMENT_TOKEN_TO_BE_REPLACED
Social media
and networks
Subscribe to our
newsletter