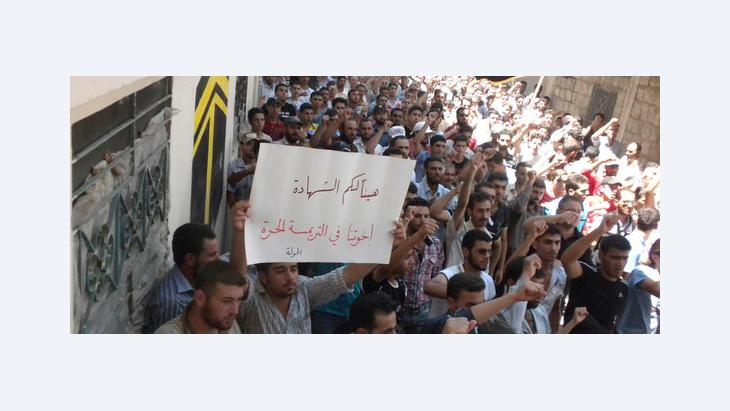 Massacre in Tremseh
Window of Opportunity for Diplomacy Closing

﻿Tremseh would seem to be the most recent addition to a growing list of bloody massacres in Syria. The brutality of the attack further reduces the likelihood of a diplomatic solution. Kersten Knipp reports

﻿A terrible bloodbath in a Syrian village has caused worldwide outrage and fuelled the debate on international intervention. Up to 250 people were reportedly killed in Tremseh, near the city of Hama. If the information provided by the opposition is confirmed, the attack on this village could be the worst massacre since the beginning of the uprising 16 months ago.

According to the opposition, witnesses relate that a few days before the bloodbath, the army set up checkpoints on the access roads to the village. First, the army shelled the village, which caused many residents to flee. Then, accompanied by militia members, the army advanced on the village and killed many of the remaining inhabitants.

The Syrian government painted an entirely different picture via the state news agency. Armed terrorist groups "had captured Tremseh and fired indiscriminately on the inhabitants," went the report. Security forces exchanged fire with gunmen; three soldiers and around 50 villagers were killed. As it has since the beginning of the uprising in March 2011, the regime of President Bashar Assad once again blamed "terrorists" for the violence in the country.

The head of the UN observer mission, General Robert Mood, told reporters: "From our presence in the Hama province, we can verify continuous fighting yesterday [Thursday] in the area of Tremseh. This involved mechanized units, indirect fire as well as helicopters." He said his team was ready to investigate the incident in Tremseh once there had been a "credible cessation of violence and a local ceasefire." 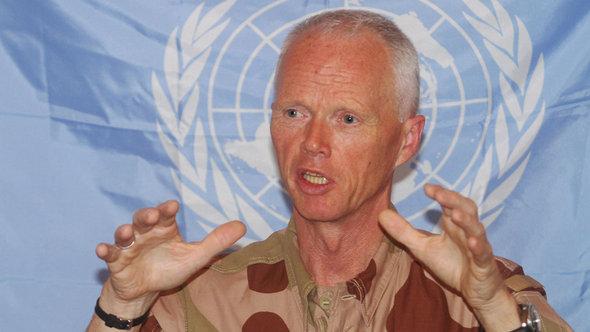 Major General Robert Mood, head of the UN observer mission in Syria, confirmed fighting in the area of Tremseh. UN observers, who entered Tremseh on Saturday, two days after the reported atrocities occurred, appeared to contradict Syrian opposition reports of a civilian massacre in the village, saying only that an attack appears to have targeted homes of defectors and rebel fighters; they intend to return to the village on Monday

The regime flexes its muscles

The location of the massacre was no coincidence, says Sadiq al Mousllie, a representative of the Syrian National Council living in Germany. The majority-Sunni village is surrounded by villages with a predominantly Shia population.

This was also the case with other massacres, which suggests that the government is trying to drive a wedge between sections of the Syrian population, and to keep the Alawites, which include the Assad clan, on its side. "The regime is trying to use this massacre to send out a message: look, we're dealing with the Sunni villages, but not the Alawite ones."

But al Mousllie finds it unlikely that this strategy will work. Across the country, he says, Sunnis and Shias are fighting together against the Assad regime; there is no war between the religions in Syria. This is why, he adds, the regime is resorting to increasingly drastic means to intimidate the population.

According to witnesses, some villagers were literally butchered. The television station Al Jazeera reports that the attackers dismembered their victims and distributed body parts both in the local mosque and the surrounding fields. There is, however, no independent confirmation of these reports. 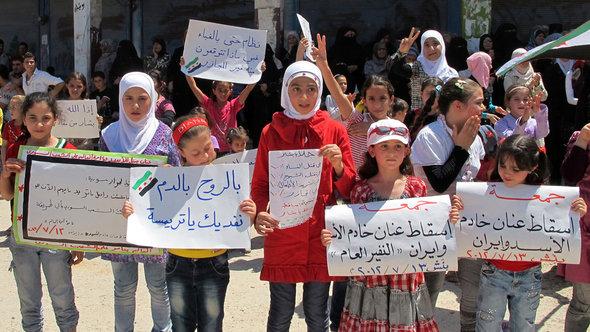 Young girls in Syria protest against the UN and President Assad: the banner reads "Step down (Kofi) Annan, servant for Assad and Iran - With our blood we are all together with the village of Tremseh"

The opposition says that the so-called Shabiha militias are responsible for the atrocities in Tremseh. This notorious pro-regime mercenary militia is particularly dreaded in Syria. Rafif Jouejati, spokeswoman for the opposition local coordinating committees, says they are mainly made up of criminals. "Many of them were in prison but were released in order to defend the regime."

The Shabiha militias are not a part of the regular government troops. They are paid on a daily basis, and wages can differ enormously. "I do not know what is used as a basis for their pay, whether the number of their victims, or the imagination that they put into their murders on the day. What we cannot say is that they are mainly Alawites; the militias come from the entire spectrum of Syrian society. They are paid very well and so are very loyal to the regime."

Messages from the regime

Al Mousllie indicates that the pro-Assad militias are often active just before meetings of the UN Security Council. Through this use of terror, the regime aims to send two messages, he says. The first is for the international community and goes something like this: "The regime couldn't possibly have done this because it would never do something like this before a UN Security Council session."

The second message, which is being sent to the Syrian people, is that they must realize that, despite all efforts and pressure from the international community, the regime is still capable of doing what it wants. "This is done to demoralize the people," says al Mousllie. 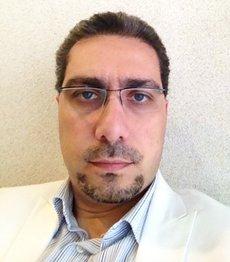 Sadiq al Mousllie, a representative of the Syrian National Council, feels that although the Assad regime is trying to drive a wedge between Sunnis and Shias in Syria, this strategy will not succeed

​​In view of the violence inside Syria, the various opposition groups recently agreed at a joint conference in Cairo to force the Assad regime to step down. There is no longer any room for other options, according to Jouejati, the local coordination committee spokeswoman. Any dialogue has also been ruled out with the regime. "There are neither negotiations nor dialogue with Assad and his men because that would mean speaking with the murderers. Too much blood as been spilled, too many people detained and tortured in prison, for us to even consider a dialogue," stressed Jouejati.

The resignation of Assad is now the only remaining option for the opposition Syrian National Council (SNC) too, notes Al Mousllie. It's too late for other options, he says. At the same time, the SNC continues to appeal to the international community – and in particular the UN Security Council – to stop the violence. "As part of the international community, we are still banking on their support," says Al Mousllie.

Rafif Jouejati is more sceptical. She does not expect much to come of the attempts to resolve the conflict diplomatically. It is difficult, she says, because "the latest massacre is a classic example of what happens when Bashar al-Assad agrees to a new peace initiative, whether it comes from the Arab League or is called Annan Plan I or II."

"In the end, there are always deadly actions against anonymous civilians, so I do not think we can put too much stock in a political solution to this conflict," says Jouejati.

Home
Print
Newsletter
More on this topic
Syrian Refugees in Iraq: Exodus into the UnknownThe Syrian Dissident Walid al-Bunni: ''In a Revolution You Don't Have Much Time''Tension in Lebanon: In the Shadow of the Syrian RevolutionSyria after the Houla Massacre: The Long Road to a ''Yemeni Solution''
Related Topics
Arab Spring, Arabellion, Democracy and civil society, Human rights, Syrian Civil War
All Topics

A ceasefire has been in effect in Libya for the past year and a half. Yet after Russia's attack on Ukraine, another proxy war looms in Africa's most oil-rich country. Mirco ... END_OF_DOCUMENT_TOKEN_TO_BE_REPLACED

When times are tough, the exchange of ideas and perspectives becomes especially important. It takes dialogue. And at Deutsche Welle, we need distributors and cooperative partners ... END_OF_DOCUMENT_TOKEN_TO_BE_REPLACED 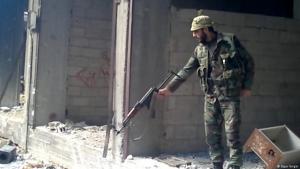 A leaked video shows scenes of a grisly Damascus massacre by Assad forces. Six minutes of horror from the war in Syria that were never intended to be made public. By Luisa von ... END_OF_DOCUMENT_TOKEN_TO_BE_REPLACED

The lack of grain supplies from Ukraine is forcing Egypt to act. Now even the Toshka project is being revived to grow grain in the desert. Birgit Svensson travelled to see it END_OF_DOCUMENT_TOKEN_TO_BE_REPLACED

Since President Abdul Fattah al-Sisi seized power in Egypt in 2013, he has ruled the country with an iron fist. Civil society, opposition and free press struggle to survive. Tens ... END_OF_DOCUMENT_TOKEN_TO_BE_REPLACED

END_OF_DOCUMENT_TOKEN_TO_BE_REPLACED
Social media
and networks
Subscribe to our
newsletter