Still, Iranˈs position is not particularly strong. Just as the U.S. has depleted the potential of sanctions, Iran may have depleted Americaˈs patience for its asymmetric tactics. Immediately following the attack on the Saudi oil facilities, Trump hinted at military action.

Another unattributed attack of this sort – let alone anything bigger or resulting in American casualties – might be a bridge too far. When the U.S. and Iran have played all their cards in the current game, a more dangerous one is likely to begin.

That doesnˈt necessarily have to mean open kinetic warfare. But third parties like Saudi Arabia and Israel could launch their own asymmetric attacks, and the U.S. itself could turn to asymmetric warfare. All of these actors have played this game before, though not on a grand scale. 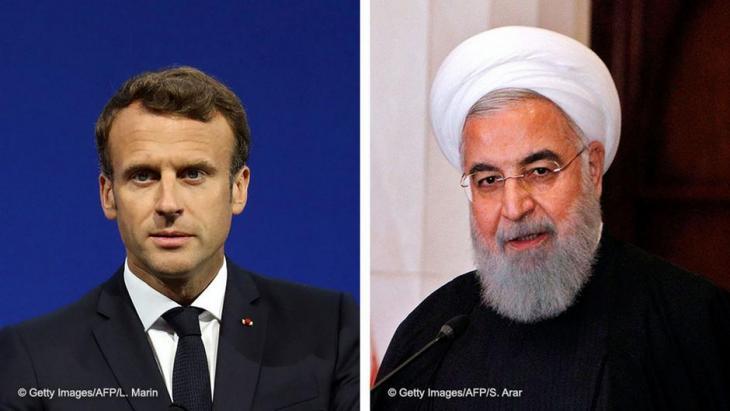 Positive feedback from Tehran: according to a mediation proposal by French President Emmanuel Macron, Iran should promise never to work on a nuclear weapons programme and to engage in negotiations for peace in the region and safe shipping in the Persian Gulf. In return, the Americans should lift the sanctions reintroduced in 2017, especially against the Iranian oil and finance industry

Recognising the danger of continued asymmetric escalation, the JCPOAˈs European signatories and regional actors such as the United Arab Emirates have proposed steps to defuse the conflict. These include, first and foremost, direct talks between Iran and the U.S., which the Europeans seem to be working to facilitate.

In this process, Europe would do well to disregard the hype about a meeting between the two countriesˈ presidents. Other high-level officials would do, and they could meet within various bilateral or multilateral frameworks.

The remaining JCPOA signatories – China, France, Germany, Russia, the UK, and the EU – want to salvage what they can of the 2015 agreement, as a meeting in Vienna in July on the topic showed. But a diplomatic solution to the tensions between Iran and the U.S. will also require the involvement of Iranˈs neighbours.

Other ideas for easing tensions are also on the table. For example, French President Emmanuel Macron has proposed extending a $15 billion credit line to Iran that would help to offset the sanctions-induced loss of oil revenues. Various plans for talks on regional security have also been put forward.

Such efforts offer some reason for hope. But the situation is increasingly tenuous, and it could get much worse – potentially leading to a direct confrontation between the U.S. and Iran – before diplomacy can make it better.

Dalia Hatuqa is an experienced journalist who has reported on the Israeli-Palestinian conflict from Ramallah, Washington DC and Amman. A writer for Time Magazine, Foreign Affairs ... END_OF_DOCUMENT_TOKEN_TO_BE_REPLACED

Since President Abdul Fattah al-Sisi seized power in Egypt in 2013, he has ruled the country with an iron fist. Civil society, opposition and free press struggle to survive. Tens ... END_OF_DOCUMENT_TOKEN_TO_BE_REPLACED

Very different Western reactions to the suffering in Ukraine and the Arab world show that there is a profound rift among cultures. Essay by Michael Young END_OF_DOCUMENT_TOKEN_TO_BE_REPLACED

Many Turks are dissatisfied with the international status of their country. At the same time, opinion polls reveal great scepticism among the Turkish population towards the USA. ... END_OF_DOCUMENT_TOKEN_TO_BE_REPLACED

Since Spain abandoned its traditional neutrality towards the conflict in Western Sahara, Morocco has announced a "new phase" in relations between the two countries. But what is ... END_OF_DOCUMENT_TOKEN_TO_BE_REPLACED
Author:
Volker Perthes
Date:
Mail:
Send via mail

END_OF_DOCUMENT_TOKEN_TO_BE_REPLACED
Social media
and networks
Subscribe to our
newsletter