In order to make progress on one of the Evangelical pro-Israel lobby's favourite issues – namely to terminate support for the UN Relief and Works Agency for Palestine Refugees in the Near East (UNRWA) – over 5,000 lobbyists were dispatched to Congress in 2018. They succeeded: the U.S. has stopped contributing to the agency.

But it didn't end there: these organisations have had even greater lobbying success during the Trump administration: U.S. withdrawal from the Iran Nuclear Deal: done. Moving the U.S. embassy to Jerusalem: done. Political recognition for the settler movement: done. When it came to the Israeli–Palestinian conflict, Trump turned his back on almost every single international principle that previous administrations had always respected.

Evangelical preachers such as John Hagee, whom Netanyahu has called "Israel's best friend" and who founded a key lobby organisation called "Christians United For Israel" (CUFI), not only attended the celebrations marking the opening of the U.S. embassy in Jerusalem and the presentation of the "Trump Peace Plan" at the White House, they even played a key role in the stage-managing of these events. 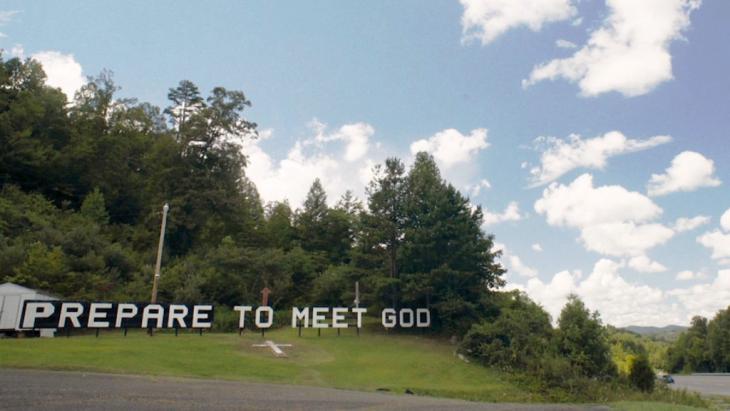 "Prepare to meet God": the documentary tells the story of how impoverished Christians in Kentucky donate their last penny to a charity in Israel. They hang the Star of David above the cross in their church, expecting that the Redeemer will soon return to Israel, heralding the end of days. Using the example of the small community in Kentucky, the film reveals a disturbingly tangled web of politics and religion. Award-winning director Maya Zinshtein offers exclusive insights into the world view of American Christians and their apocalyptic visions

Zinshtein makes no bones about how she feels about all this: she filmed in the occupied territories, showing the catastrophic consequences of this policy for the rights of Palestinians. What the radical Christians celebrated costs lives: on the day the embassy was moved to Jerusalem, 58 Palestinians were killed and 2,771 were injured in protests.

But the situation on the ground, international law and occupation don't seem to matter to the Evangelicals. This becomes grotesquely evident in the filmed encounter between Pastor Bingham IV and Rev. Dr. Munther Isaac, a Christian Palestinian pastor, in a church in Bethlehem. When the latter tries to explain to Bingham how difficult the situation for Palestinian Christians is and describes life under occupation, Bingham has only one answer for him: God has promised the land to the people of Israel. Exasperated by what he hears, Isaac compares Bingham's argument to a jihadist quoting the Koran. Bingham remains unmoved.

He and his fellow Evangelicals proactively support the Israeli settler movement, pay visits of solidarity to them through the "Christian Friends of Israeli Communities" and collect donations. This benefits not least Prime Minister Netanyahu, who for years has only been able to cling on to power thanks to the support of the settlers.

The Evangelicals who appear in the film openly share their unvarnished opinions with Zinshtein. They believe that Jesus will only come again when all Jews are united in Israel. They also believe, however, that on the Day of Judgement, the chosen people will be asked to make a fatal choice: either convert to Christianity or perish. When Zinshtein, herself an Israeli, asks Pastor Bingham Senior in an interview what would happen to the Jews in Israel who do not want to convert to Christianity, he doesn't mince his words.

The Evangelicals' relationship to Israel as a Jewish state is, at best, ambivalent: on the one hand, they preach that the Jews are better people and that Israel is the Promised Land. In the same breath, however, they trot out the wildest anti-Semitic cliches.

With Biden as the new U.S. President, the Lobbyists' unique access to America's corridors of power will dwindle, as will their abstruse interpretation of international law with regard to the conflict in Israel and Palestine. The influence of the Evangelical associations will, however, remain as strong as ever.

To counter this influence, something more is needed than a new incumbent in the White House, namely the overcoming of the growing social and ideological divisions in the USA.

Rene Wildangel is a historian and writes about the Middle East.

Conceived by Israeli journalist and rabbi Elhanan Miller, "People of the Book" is a YouTube project designed to provide information on Judaism in Arabic. Disarming prejudice with ... END_OF_DOCUMENT_TOKEN_TO_BE_REPLACED

While Palestinian political concerns are largely ignored these days, Palestinian band of the moment 47Soul is taking the Middle East's music scene by storm. By Daniel Bax END_OF_DOCUMENT_TOKEN_TO_BE_REPLACED

Berlin's "House of One" project, instigated by Jews, Christians and Muslims, will finally begin to take physical shape in early 2021, following a lengthy period of preparation. ... END_OF_DOCUMENT_TOKEN_TO_BE_REPLACED

Now that he has converted Hagia Sophia back into a mosque, Turkey's president, Recep Tayyip Erdoğan is setting his sights on the Al-Aqsa Mosque in Jerusalem. Joseph Croitoru ... END_OF_DOCUMENT_TOKEN_TO_BE_REPLACED
Author:
René Wildangel
Date:
Mail:
Send via mail

END_OF_DOCUMENT_TOKEN_TO_BE_REPLACED
Social media
and networks
Subscribe to our
newsletter