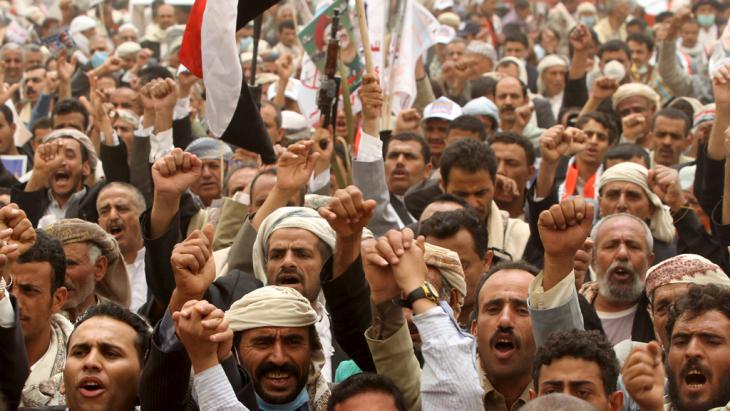 Media reports on the Yemen conflict

A skewed view of Yemen's plight

In this opinion piece, Charlotte Wiedemann criticises the fact that many media reports about the current Yemen conflict are ill-informed, tendentious and overlook the West's responsibility for the escalation of the conflict

In 2011 and 2012, the supporters of the Yemeni revolution camped out for a year on Change Square, right in the centre of the capital city. They were not the only ones there; the Houthis also had a large tent on the square. The men gathered in the afternoons, as is the custom there, one cheek stuffed with chewed-up qat leaves, and sat around watching martyr videos.

They had no shortage of dead people to mourn. Ali Abdullah Saleh, Yemen's long-time ruler and the common enemy of everyone on Change Square, had fought six brutal wars against the Houthi movement. These wars were not waged on religious grounds: Saleh is also a Zaidi, a denomination to which 40 per cent of Yemenis belong. To refer to the Houthis as "Shia rebels", as most sections of the media are doing, is misleading.

The Houthis, who call themselves "Ansar Allah" (defenders of God), came into being as a social/political movement opposed to the marginalisation of Yemen's north east. During the revolution, they were among the new political players on the national stage, like the youth and the South Yemen Movement. Together, they demanded the removal of the old, corrupt elite, in particular Saleh's clan. They also wanted him and his son to answer for war crimes committed in the north-eastern city of Sa'dah.

Things turned out differently. The construct imposed on Yemen by the international community – Saudi Arabia, the USA and the EU – sought to achieve stability, not democracy and a new beginning. The revolutionaries, including the Houthis, were side-lined in favour of the old elite. Saleh received guaranteed immunity, the foundation on which he is building his political resurrection. 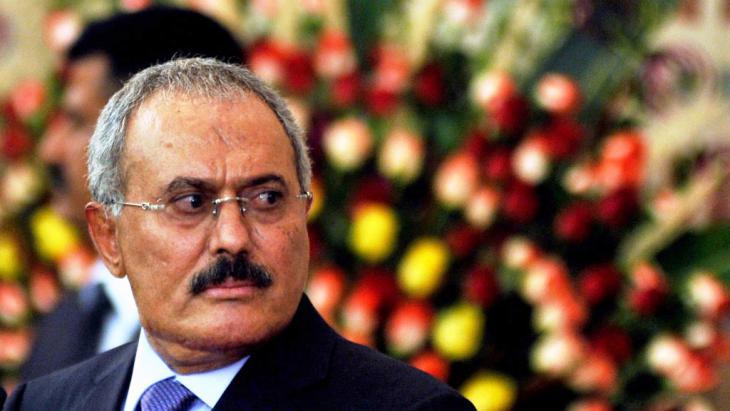 Ex-dictator and powerful agent in the Yemeni conflict: the former Yemeni president Ali Abdullah Saleh recently called on his countrymen to return to dialogue in order to end the war in the country. Saleh's followers are fighting alongside the Houthi militias against the supporters of President Abd Rabbu Mansour Hadi. In 2011, Saleh stepped down as president after months of protests against his 33-year authoritarian rule

Today, many rounds later, Yemen shows that smothering demands for democracy has not served to bring stability. On the contrary, Western policy has failed in Yemen, just as it has elsewhere. But this idea is too uncomfortable to bear, which is why people prefer to explain Yemen in religious terms – Sunnis against Shias – which allows journalists to neatly pigeonhole the conflict. The only problem here is that Yemen doesn't really fit into this pigeonhole: the boundary between the two Muslim denominations is more porous here than anywhere else.

This is down to the Zaidis. Their name comes from the great-great-grandson of the prophet, whom they recognised as the fifth imam in the dispute over successors within Islam. In doing so, they bade goodbye to the majority of Shias before a religious Shia doctrine even came into being. As a small movement, left to their own devices, the Zaidis had a lot of freedom of thought. They have a remarkable intellectual history, which began in a small state in northern Iran, on the Caspian Sea, and continued, from the tenth century, onwards in northern Yemen, with Sa'dah as their capital.

The Zaidi theology was related to a rationalist school of Sunnis: the "Mu'tazila". They emphasised the free will of man above all else, which is why current Muslim reformist thinkers are making the link to them again. The Sunni rationalists went into decline after the eleventh century, their legacy only living on among the Zaidis. In Yemen today, around 50,000 old manuscripts bear witness to this astonishing cultural transfer, which took place over great distances.

This foray into the past was necessary to understand why the Zaidis, of all people, are unsuited to the media pattern of a Sunni–Shia religious war. Some of their scholars are very close to the Sunnis. This is why, in Yemen today, Zaidi Shias and Sunnis pray in the same mosques. "Shia mosques" exist only in the news.

But in spite of all this, can what is now happening in Yemen still be explained as a proxy war between Saudi Arabia and Iran? Unlike the media, experts and think-tanks say that although the Houthis are supported by Teheran, they are not steered by them. Moreover, their advances in the past few months have been facilitated principally by factors within the country: Saleh, for whom no tactic is too dirty, has allied himself with the Houthis and put those sections of the army that are still under his control at their disposal. 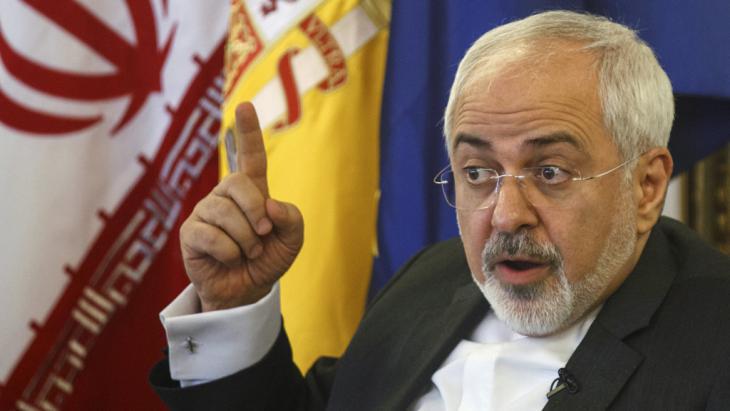 Iran as a scapegoat: "Many commentators, however, write with such empathy about the Saudi 'nightmare' of being 'encircled' by Iran that it sounds as if they have just come from a briefing in Riyadh's embassy. [...] There is an old reflex at work here: Saudi Arabia is on the side of the West; it is our ally. And 'Iranophobia' is firmly anchored in the media," writes Charlotte Wiedemann. Pictured here: Iranian Foreign Minister Javad Zarif

It also makes little logical sense to regard the Houthis as puppets of Teheran. If that were the case, why would their advance have coincided with the delicate final phase of the nuclear negotiations, in which the Iranian side made every effort to send out signals of detente?

For Saudi Arabia, on the other hand, it makes total sense to start a war at this precise moment, forcing the USA to oppose Iran, at least in this particular arena. But the expression "proxy war" is wrong here – and overly neutral. If the rich Saudi Arabia (plus nine allies) threatens to bombard the poor Yemen "until it is stable", there should be an outcry in published opinion pieces.

"Iranophobia" as a fixed component of the media

Many commentators, however, write with such empathy about the Saudi "nightmare" of being "encircled" by Iran that it sounds as if they have come straight from a briefing at the Saudi embassy. The Houthis are even being accused of potentially paving the way to Saudi Arabia for al-Qaida – a crazy fantasy. There is an old reflex at work here: Saudi Arabia is on the side of the West; it is our ally. And "Iranophobia" is firmly anchored in the media.

But there is something else. The tone of media reporting on the Middle East is now the same as it was before the start of the Arab Spring. There are powers, religion and geopolitics. There are no populations, fighting for rights and participation. There is much contempt in the idea that some Yemenis are allowing themselves to be instrumentalised by far-off Teheran.

You don't need to sympathise with the Houthis. They have fallen prey to the old Yemeni sickness: taking up arms and letting the weapons find their allies. But the West is not extending its hand to them for other reasons: just like al-Qaida, the Houthis are against the American drone war in Yemen.

U.S. President Biden has announced he will be excluding Saudi Crown Prince Mohammed bin Salman from future talks between Washington and Saudi Arabia. Is this just lip service that ... END_OF_DOCUMENT_TOKEN_TO_BE_REPLACED

Nobel Peace Prize laureate Tawakkol Karman says the time has come to pressure Saudi Arabia and the UAE to withdraw from Yemen so that the country can resume the peace process and ... END_OF_DOCUMENT_TOKEN_TO_BE_REPLACED

Ten years ago, in February 2011, Yemenis took to the streets for freedom and the rule of law. But instead, the uprising turned into a war that has lasted for years. Impressions ... END_OF_DOCUMENT_TOKEN_TO_BE_REPLACED

Islam scholar and social anthropologist Marie-Christine Heinze is head of an academic exchange project with the University of Sanaa on "Post-conflict Reconstruction in Yemen". In ... END_OF_DOCUMENT_TOKEN_TO_BE_REPLACED

Yemen's Arab Spring uprisings led to a raging civil war that has inflicted immense suffering on the population for the past seven years. Will the United States' halt on arms sales ... END_OF_DOCUMENT_TOKEN_TO_BE_REPLACED

Report from a disintegrating world: the early Islamic buildings of Sanaa are suffering from the effects of climate change and war. This world heritage site could be lost forever. ... END_OF_DOCUMENT_TOKEN_TO_BE_REPLACED
Author:
Charlotte Wiedemann
Date:
Mail:
Send via mail

END_OF_DOCUMENT_TOKEN_TO_BE_REPLACED
Social media
and networks
Subscribe to our
newsletter