And Jesus Is His Prophet

Mehdi Bazargan, the first Prime Minister of the provisional government of the Islamic Republic of Iran and leader of the Liberation Movement of Iran, has compiled a book of statements made in the Koran about Christianity in order to promote understanding between Muslims and Christians. By Tagrid Yousef 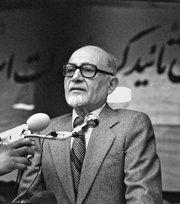 Mehdi Bazargan, politician and Koran scholar, remained a symbolic figure for the national-religious and liberal-Islamic movements in his country

​​The primary purpose of Mehdi Bazargan's book is to shed light on the Chistian-Islamic dialogue. In "And Jesus is His Prophet: The Koran and Christians", Bazargan addresses the issue of how Jesus, Mary and Christians in general are depicted in the Koran. In the process, Bazargan manages to condense these depictions into a compact portrayal that is also rich in content.

Bazargan opens his book with a word of greeting: "To my Christian brothers and sisters." Thereupon, he points out that in the Koran, Christians were referred to as "Nazarenes" or as People of the Book ("Ahl al-Kitab") – which is essentially his way of referring to the equality of the book religions, which is part of Islamic tradition.

Already in the foreword, the author explains that in his opinion, the Koran is an authentic source of insight for believers and scientists alike. But in the same breath, Bazargan also confronts the issue of the contradictions and controversies the oral traditions (Hadiths) of the immediate post-Mohammedan age have caused until the present day.

Thanks to journalist and Islamic studies scholar Navid Kermani, Bazargan's book has finally been published in Germany eleven years after his death. In his introduction, Kermani describes the Iranian reform politician and Koran scholar as not just​​ a religious person, but also a very liberal one who advocated individual responsibility and democratic decision-making. This was true under the Shah's rule as well as during the Khomeini era.

Bazargan cautioned against all forms of compulsion – for example, regarding the mandatory wearing of the chador – but also principally condemned any use of violence against so-called "heathens."

In his commentary, Bazargan uses the word "Islam" to refer to to its literal translation:"the surrender to God's will." In his view, this concept means that in God's eyes, all monotheistic religions are equal.

Within this context, it is important to emphasize the form of
presentation the author chose for this book. In identifying the Koran verses and the corresponding commentary, Bazargan uses a chronological order. His arrangement of the individual verses of the Koran is based on the "Science of Occasions of Revelation."

Thus, Bazargan takes his orientation from the chronological order of the revelation of the individual verses. In doing so, he relates exactly when the Suras were revealed to the prophet Mohammed.

Returning to an "authentic Islam"

The search for an open understanding of modern Islam was significant for Bazargan, who was born in Teheran in 1907. He published countless books and gave lectures in which he presented his ideas on a progressive form of Islam.

Bazargan advocated the return to a what he called "authentic Islam" and called for all Muslims to actively participate in transforming their society.

He was arrested four times between 1955 and 1978 and spent a total of five years in prison. In 1961, he founded the "Liberation Movement of Iran" ("Nehzat-e azadi") together with like-minded intellectuals.

In February 1979, despite the significant differences between them, Khomeini appointed him as the first Prime Minister of the revolutionary movement. Bazargan hoped to use the power of his position to steer the revolution into democratic channels. It proved to be a hopeless undertaking however, as he resigned just ten months after taking office.

Until 1984, Bazargan was a member of parliament in his position as chairman of the "Liberation Movement of Iran." In this capacity, he fought against the abuse of religion and the violation of human rights. This courageous politician and Koran scholar remained a symbolic figure for the national-religious and liberal-Islamic movements in his country until his death on January 20th, 1995.

Portrait Mohammad Shabestari
Faith, Freedom, and Reason
Can there be such a thing as Islamic human rights? Do the commandments set forth in the Koran have eternal validity, or can they be modified according to the demands of reason? Iranian clergyman Mohammad Shabestari has devoted his life to exploring these issues in modern religious and political Islamic thinking. By Roman Seidel

Mohsen Kadivar
Adapting to Contemporary Islam
Is Islamic law compatible with democracy and human rights? One of Iran's best-known reformist clerics has an answer to this question – an answer that challenges Islamic orthodoxy. Bahman Nirumand reports on a reformist theologian

Abdolkarim Sorush
For an Open Interpretation of the Koran
The reformist thinker and philosopher Abdolkarim Sorush is one of a new generation of theologians that openly speaks out in favour of human rights and secularism in Iran. Katajun Amirpur about an awkward Iranian intellectual

END_OF_DOCUMENT_TOKEN_TO_BE_REPLACED
Social media
and networks
Subscribe to our
newsletter