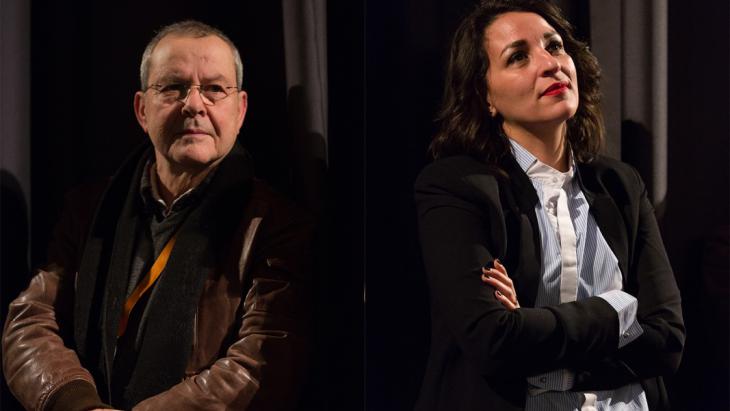 In his film ″Tahqiq fel Djenna″ (Investigating Paradise), which was awarded the Panorama 2017 prize at this year′s Berlinale, Merzak Allouache investigates the sexualised idea of Paradise as spread by Salafist preachers. By Rene Wildangel

″Tahqiq fel djenna″ (Investigating Paradise) tells the story of the journalist Nedjma and her colleague Mustapha, who are researching Salafist preachers and the effect of their ideas on Algerian society. The fictional framing narrative is combined with documentary scenes, in which people are interviewed in various places across Algeria.

The film’s starting point is the video of a Salafist preacher from Saudi Arabia, which Nedjma comes across in the course of her research. His vision of paradise leaves her speechless. In the video, he gives a debauched description of what the 72 "Houris" (virgins) in paradise look like: "A Houri with black hair and an alabaster complexion – may the creator of day and night be praised – with such gorgeous hair! And what breasts! What a mouth! With what thighs! And legs! So white! So sweet! Without any moisturiser. Neither Nivea, nor Vaseline... He said that a virgin will hand you a glass of wine. Yes, wine. Wine in Paradise is better than the one down here."

No Nivea, but good wine? Nedjma first watches with amusement, then she frowns. "Are there a lot of these videos on YouTube?" she asks her colleague. "Yes," says Mustapha, "If you type in Houri, you get thousands of clips like that." This real video was also Allouache’s starting point for making the film. He saw it in his Facebook feed, when it was posted by friends. "I have 5000 Facebook friends," he says, "from all walks of life."

After watching the video, Allouache asked himself a lot of questions: what impact do videos like this one have, relayed on countless religious television channels? How seriously do people take them? Have they drowned out the poetry and reticence of the traditional Islamic approach to paradise?

Many different visions of paradise

And so he decided to send the fictional journalist Nedjma on her journey. It had to be a woman who was questioning people about men’s sexual rewards in paradise. In the course of her research, she shows the video of the Saudi preacher to numerous people. Among others, she meets many prominent Algerian artists, activists and intellectuals.

Their visions of paradise are quite different: a place where there is no stress, for example, or no work. A place where everyone is treated equally. A place where everyone is cheerful. And a place "where there are no taxes", as the well-known Algerian actress Biyouna says in her interview, with a laugh.The dramaturg Hamida Ait el Hadj laughs at the preacher in the video, too: "So who’s there waiting for the women, then, if there are 72 virgins for the men? I don’t understand. How are we to be treated? Or are we supposed to do the cleaning again? And the cooking?" Biyouna points out that such images have only gained popularity in recent years. "And 72 is quite a lot, isn’t it? They have problems here on earth with just one and they want 72 in paradise?"

It is this wit that lends Allouache's film a refreshing distance; it isn’t a cliche-ridden search for images of Islam among Algeria's young society, out to prove a point. This is reinforced by the fact that the research trip is shot in sober but beautiful black and white contrasts. There is a sense of mourning for what is being lost here. The images of paradise that have become branded on the minds of many young people are new in their pop-cultural and consumerist aspects.

Islamic scholars whom Nedjma visits in little central Algerian town of Timimoun criticise the television preacher and his ideology in no uncertain terms: "He talks a lot, but he says nothing." This, they say, has nothing to do with traditional ideas. And what are the director’s own ideas about paradise? "I grew up with the classical Islamic tradition myself and for me paradise is something beautiful, but also indescribable."

A lot of people laugh at the video; others issue warnings. A former Salafist says he thinks the preacher is deliberately exploiting the sexual frustration felt by many young people. This makes them easy to recruit for jihad. In this curious world of ideas, the double standards are striking: on this side, it promotes the strict separation of the sexes and the wearing of the veil; but the sermon about paradise spreads voluptuous sexual fantasies. 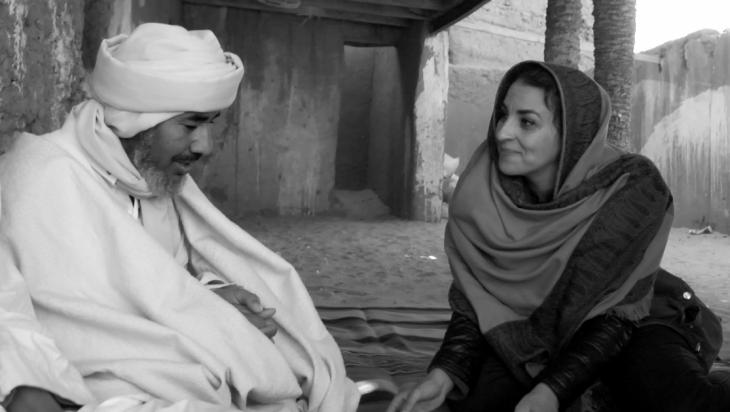 The images of paradise branded on the minds of many young people are new, derived from popular culture and the influences of our modern consumer society. Allouache′s film, which presents its ′research′ in beautifully sober monochrome footage, creates a sense of mourning for what is being lost in the process

The author Kamel Daoud also criticises this exploitation of sexuality and speaks of "porno-Islamism". "The whole thing is at once tragic and comic. These men want a life, but only after death." Several people whom Nedjma interviews also blame Saudi-style Wahabism for Algeria’s civil war and the "black decade".

Her conversations with young men in various places in Algeria reveal the mark the preachers have made on their imagination. And how important these longed-for places are when life on earth offers so few opportunities. In an Internet cafe, Nedjma interviews young men; women don’t want to appear on camera. Their replies may not be identical, but most pick up on the promises of popular preachers like Sheikh Shemseddin, one of the best known Algerian TV preachers. That doesn’t mean that all these young men are potential perpetrators of violence and Allouache consciously avoids that clumsy suggestion.

So what makes the preachers so successful? "I’m no sociologist," says Allouache, "but it’s clear that the way these young people have been marginalised and their lack of opportunities – which also drives them to take the dangerous route across the Mediterranean – make them susceptible to such propaganda."

Social media also gives the videos a huge reach. Hardly anyone goes to the cinema, he says – there isn't much public interest among Algerians. "There are very few cinemas left. Of course it’s a frustrating situation for a filmmaker," says the director. If films are ever seen by a larger audience, it’s when they are shown on TV or uploaded to YouTube. Allouache hopes that his film, too, might be shown and discussed there.

And what can be done to combat the Salafists’ damaging images? Allouache has no new answers; the preachers themselves are not open to discussions. Allouache tries to debunk their images. The journalist Mustapha also jokes at the end that scholars have solved the problem now: the business about 72 virgins was just a misunderstanding. In reality it’s just one virgin and she's 72 years old.

There have already been discussions about whether the "Houris" might just be a mistranslation and the Koran actually speaks of 72 grapes. That would leave the extremist preachers with some explaining to do.

21 July marks the centenary of the birth of Mohammed Dib, one of the founding fathers of French-language Algerian literature. Born in 1920 in Tlemcen, Algeria's national writer ... END_OF_DOCUMENT_TOKEN_TO_BE_REPLACED

Among the greatest threats to Algeria’s 1,622 km long coastline are irresponsible fishing practices and a complacency about marine pollution, especially plastic waste. The HOME ... END_OF_DOCUMENT_TOKEN_TO_BE_REPLACED

A heated debate is raging in the Islamic world about whether the religious and political spheres in Islam are one and the same. Before this matter can be settled, the terms " ... END_OF_DOCUMENT_TOKEN_TO_BE_REPLACED

According to the latest Reuters tally, more than 2.54 million people are now reported to have been infected by the novel coronavirus globally and 177,004 have died. As Muslims ... END_OF_DOCUMENT_TOKEN_TO_BE_REPLACED

Ramadan begins this week even as the coronavirus pandemic up-ends life around the world. The crisis is forcing Muslims to re-think traditions and find new approaches to one of ... END_OF_DOCUMENT_TOKEN_TO_BE_REPLACED

END_OF_DOCUMENT_TOKEN_TO_BE_REPLACED
Social media
and networks
Subscribe to our
newsletter