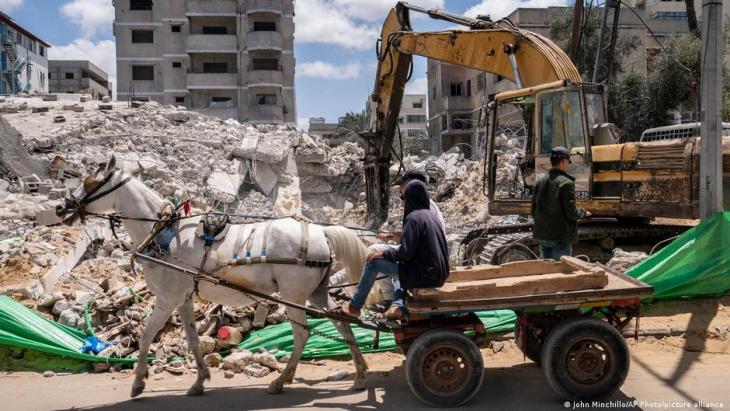 China has long portrayed itself as a strong supporter of the Palestinian cause. It has also claimed that in sharp contrast to the stance of the USA, its position is based on values. At the same time, it has been building closer political, economic and military links with Israel for years. Mu Cui examines how important the Middle East is to China

"You ask me about China's national interest in the Middle East conflict? I say: no unrest, no escalation in the region!" says Li Guofu, a Middle East expert at the pro-government Beijing-based think tank China Institute of International Studies (CIIS).

Li adds that China absolutely needs a peaceful and stable world to be able to continue on its development path: "The unrest in the Middle East not only affects the normal life of the people there, it also has a very negative impact on the stability of the whole world, thus harming China's rise."

After the recent flare-up began, Beijing called for an immediate cease-fire between Israel and Hamas. Indeed, the People's Republic of China, which holds the presidency of the UN Security Council this month, tried several times – together with other nations – to have a resolution passed to this effect. However, its attempts failed due to opposition from the United States.

Chinese Foreign Minister Wang Yi also reiterated the need for dialogue with the objective of achieving a two-state solution. Since then, of course, an Egypt-brokered truce has come into effect and has so far held. 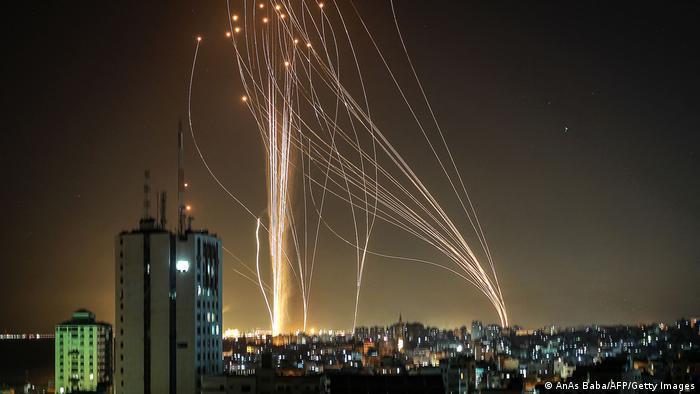 Israel's missile defence system has protected Tel Aviv and other areas from the rockets fired by Hamas from the Gaza Strip. Pictured here: rockets light up the night sky over Tel Aviv. After the recent flare-up began, Beijing and a number of other countries made several attempts to pass a UN resolution calling for an immediate cease-fire between Israel and Hamas. These attempts failed due to opposition from the United States

The Middle East plays an important role in China's economy and energy security, supplying about half of the nation's oil and gas needs. Container ships transporting goods worth billions of euros between China and Europe have to pass through the Suez Canal.

"The Israeli-Palestinian conflict is the core problem of the region," said political analyst Li Guofu. "As long as there isn't a full, just and long-lasting solution to this conflict, the unrest will not stop. That has negative implications for economic cooperation between China and many states in the region."

Israel, meanwhile, is a key player in Beijing's global economic strategy. Since establishing formal diplomatic relations with Israel in 1992, Beijing has nurtured close economic, technological and military ties, including the purchase of early-model Israeli drones. The two nations also co-operate closely on research and technology.

Furthermore, Israel plays a significant role in China's Belt and Road Initiative. Chinese investors are also involved in port expansion projects, as well as in a planned railway line between Eilat on the Red Sea and Ashdod, located to the south of Tel Aviv. The railway construction project, however, is currently on hold.

According to China's Ministry of Commerce, China–Israel trade increased by nearly 19 per cent in 2020 to about $17.5 billion (€14.3 billion), while commerce with Palestinian territories amounted to $100 million.

Paying lip service to the Palestinians?

Bao Hsiu-Ping, a Middle East expert at Taiwan's National Chi Nan University, says that while China has for decades officially been on the side of the Palestinians, Beijing's support is largely limited to the verbal. At most, he says, China has supplied a small amount of minor weapons.

"Due to the Israeli government's active campaign in Chinese media and universities, at least part of the Chinese population is now on Israel's side," he says.

China condemns violence against civilians, he said, adding: "Israel, in particular, should restrain itself and stop using violence, intimidation and provocation."

Political analyst Bao does not expect the Chinese to play a more active role in the Middle East conflict. "China's interests there are focused on economic relations. Above all, oil supplies and shipping routes should not be disrupted. With regard to other issues, China will officially stick to its principle of non-interference," he said. 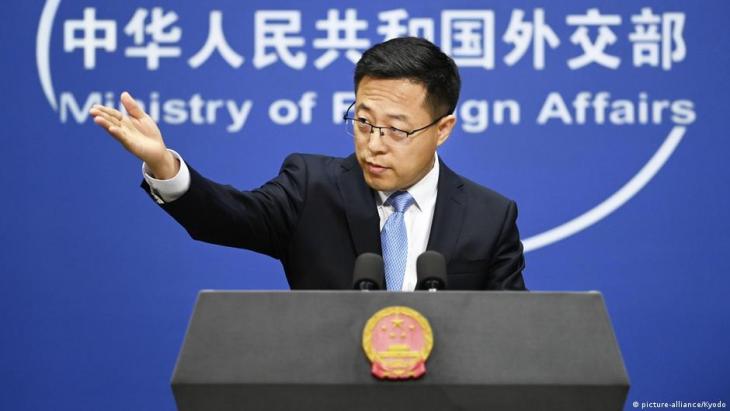 Beijing stresses that its position on the Middle East conflict is based on values, in contrast to that of the United States. In China's view, the U.S. stands ready to fuel the tension, rather than taking proactive measures to stop the conflict between Palestinians and Israel.

The Foreign Ministry has also castigated the U.S. for blocking a statement in the United Nations Security Council condemning the violence.

"The U.S. has been isolated at the Security Council unprecedentedly and is standing on the opposite side of mankind's conscience and morality," spokesperson Zhao Lijian said, according to the official English translation on the Chinese Foreign Ministry website.

"China upholds international fairness and justice, while the U.S. only cares about its own interests. The U.S. position is dictated by its closeness with relevant sides," the statement added.

Analyst Li Guofu believes that Washington's position in the current conflict could jeopardise its goal of regaining an international leadership position. He said that it is also leading to a divide between the U.S. and the European Union, where, he added, the death of large numbers of Palestinians is not accepted.

Li noted that this growing gap would be advantageous for China. "As long as Beijing continues to stand up for the basic rights of Palestinians at international level, it will enhance China's image, while America's will be damaged."

This article was translated from German.

Home
Print
Newsletter
More on this topic
Interview with Mustafa Barghouti: Palestinians rediscover their sense of unityEscalation in the Middle East: Israeli-Hamas hostilities – same old story, or is it?Israel-Hamas conflict: Gaza and Israeli residents struggle through a new realityEscalation in the Middle East: Flare-up between Israel and Hamas paints a bleak picture
Related Topics
Benjamin Netanyahu, Gaza War, Hamas, History of the Near and Middle East, Israeli-Palestinian conflict, United Nations (UN)
All Topics

German Middle East analyst Guido Steinberg and television journalist Ulrich Tilgner have both published new books on the conflicts in the Middle East. Their analyses and their ... END_OF_DOCUMENT_TOKEN_TO_BE_REPLACED

On 27 March, Iran and China signed a 25-year accord intended to foster "strategic co-operation". Despite ongoing uncertainty over the deal's actual scope, content and chances of ... END_OF_DOCUMENT_TOKEN_TO_BE_REPLACED

Turkey launched its nationwide vaccination campaign with a Chinese vaccine in January. But the public focus is more on the desolate economic situation. Turkish politicians have ... END_OF_DOCUMENT_TOKEN_TO_BE_REPLACED

This 11 September marked the nineteenth anniversary of the terrorist attacks in New York and Washington. The wide-ranging repercussions of those attacks in the years since 2001 ... END_OF_DOCUMENT_TOKEN_TO_BE_REPLACED

Lacking support from Arab countries for its stance on the Kashmir dispute, Pakistan is looking for new alliances under China's leadership. How practical is it for Islamabad to ... END_OF_DOCUMENT_TOKEN_TO_BE_REPLACED
Author:
Mu Cui
Date:
Mail:
Send via mail

END_OF_DOCUMENT_TOKEN_TO_BE_REPLACED
Social media
and networks
Subscribe to our
newsletter