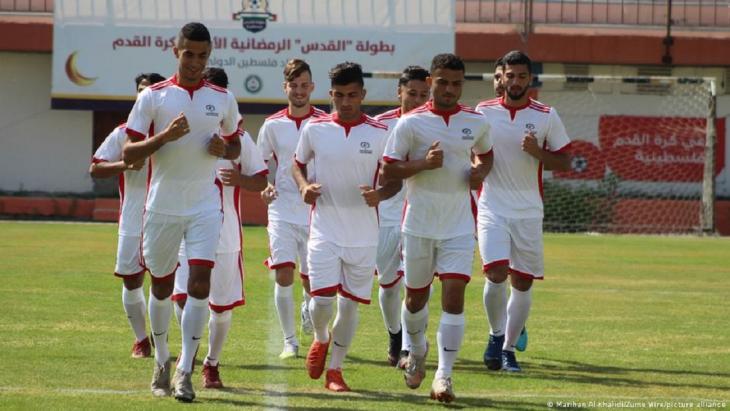 When it comes to talent, Palestine may well be able to compete with other football teams in the region, but growth and development are hampered by the situation in the Palestinian territories. The explosion of violence between Israel and Hamas in May seriously disrupted preparations for the World Cup qualifiers. John Duerden reports

On 15 June, Palestine defeated Yemen 3-0 to finish third in Group D behind Asian powerhouses Saudi Arabia and Uzbekistan in the second round of qualification for the 2022 World Cup.

It was a fine performance that suggests what the team could do if it did not have to deal with challenges and obstacles that their rivals do not even have to consider – challenges that in May assumed outsized proportions.

The world watched as the prospect of forced evictions of Palestinian families from East Jerusalem and the storming of Al-Aqsa mosque by Israeli forces provided the spark that ignited an explosion of violence in Gaza, a self-governing Palestinian territory. Initially, the militant Hamas, which controls the strip of land on the eastern Mediterranean coast, fired rockets at Israel, which then retaliated with counterattacks. According to Reuters news agency, by the day of the ceasefire on 21 May, 13 people had been killed on the Israeli side and 256 Palestinians had died in Israeli attacks on the Gaza Strip.

During that ordeal, football may not have been uppermost in the minds of the two million inhabitants in Gaza, who also have to contend with high levels of unemployment and COVID-19. The national team has, however, been one of the few international symbols of Palestine (given non-member observer state status at the United Nations in 2012) since it was recognised by football’s world governing body FIFA in 1998. When the team qualified for the 2015 Asian Cup for the first time, thousands took to the streets of Gaza and the West Bank to celebrate. 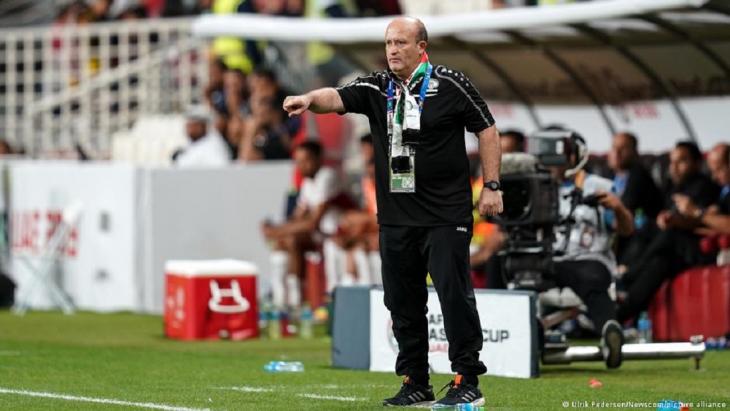 Sporting excellence under the most adverse conditions: just getting the players together for Palestine's national team is complicated. Premier League players in Gaza and the West Bank need exit permits to pass through Israeli military checkpoints

According to Noureddine Ould Ali, Palestine's head coach from 2018 until he was fired after a 5-0 loss to Saudi Arabia in March, the passion is there, but so are obstacles that prevent the national team reaching its full potential. "Whether it is football or something else, without peace you can’t do anything and there is no peace in Palestine," explained Ould Ali. "Palestinians don’t live in a good situation. People can’t move easily or do anything, and that makes football very difficult."

Just getting the players together is hard. Players in the Gaza and West Bank Premier Leagues need exit permits to pass through Israeli military checkpoints. Even if these are granted, this can take time. Exit permits are also needed as the Palestine Football Association (PFA), in a bid to increase the pool of available talent, allows the coach to look to the 6 million or so overseas Palestinians or those of Palestinian descent, to come and play for the national team.

Restrictions of movement prompted then FIFA-President Sepp Blatter to demand change at a 2014 Congress, one that PFA Deputy General-Secretary Mohammed Ammassi had been unable to attend because he could not leave Gaza. "I call on the Israeli government to facilitate this movement and I go so far as to say its cooperation is crucial," Blatter said.

But Basil Mikdadi, editor of FootballPalestine.com, reported in May that goalkeeper Rami Hamadi and team-mates Khaled Azzam and Mohammed Darweesh were late arriving in a West Bank training camp  due to safety concerns.

Susan Shalabi-Molano, Vice-President of the PFA, explained the situation. "We had a camp for the team in Ramallah and the team manager confirmed that some players arrived late to the camp," she said. "They had to go around the main entry points to the city because of clashes on Kalandia and Beit El."

For Ould Ali, who was replaced as coach by his assistant, Makram Daboub, the difficulty of getting players in for training makes a tough job that much tougher. "Palestine needs to have a strong vision to improve, but that is hard to achieve when every day your life is difficult, and just getting a team together is a challenge. Some players can’t get into Palestine or out of Palestine easily because every time they need a permit which can be hard to get.”

The Algerian coach also struggled. "Every time I needed a permit, and often the Israeli forces stopped me going into Palestine. I had to wait at checkpoints for four, five, six, eight hours or more. This is not a problem that other coaches have to deal with, but then I chose this life and this job.” 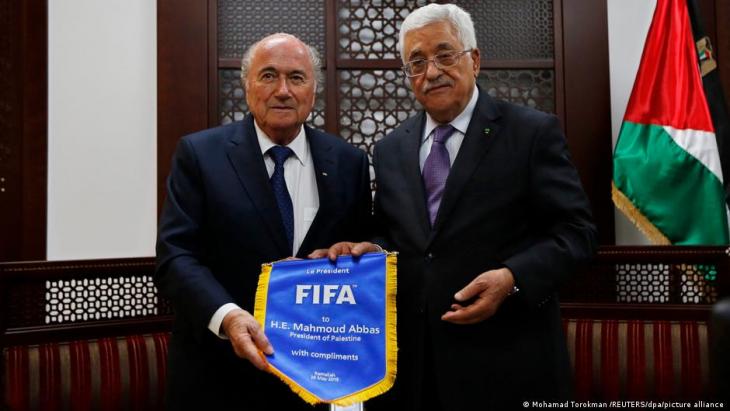 With World Cup qualification coming to a head in June, May’s violence made a difficult situation worse. On 17 May, Asian Football Confederation President Sheikh Salman bin Ebrahim Al Khalifa issued a statement expressing his condolences to the family of Muath Al-Zaanin after the PFA confirmed that the midfielder had been killed in an Israeli airstrike. "The psychological impact was huge: some lost their homes, others family members," said Ihsan Ramadan of the PFA.

Nor is it just about the national team. When referees and officials are unable to attend local games in Gaza or the West Bank, matches are cancelled. The bombings stopped all football activities, but even normal restrictions make international engagement difficult according to Ramadan. "The obstacles restrict the chance of all football bodies – players, referees, coaches – of gaining more international experience either by travelling abroad for courses and camps or by receiving other football organisations to help educate and spread knowledge of football in Palestine," she said.

With Asia only having four automatic qualification spots for the 2022 World Cup, there was never a chance that Palestine, ranked 104 in the world by FIFA, was going to finish ahead of Asian powerhouses such as South Korea, Japan and Australia. The road to Qatar, however, also doubles as the road to China and the 2023 Asian Cup, and there is a chance that the team could attend a third successive continental tournament, which would be a major success. "Qualifying for the Asian Cup is one of the main tasks currently for the team. We are hoping for good results," said Ramadan.

Palestinians get behind their team, until, like all supporters, results are not what they should be. "People get frustrated when the team loses and demand a change of coach," said Ramadan. Palestinian fans are understandably heavily invested in their national team’s fortunes. "The team is the chance for the Palestinian people to feel a victory. It’s almost the only way to find hope, to deliver the news that the Palestinian people still exist at a time when the world is forgetting about us."

Ould Ali agrees. "In Palestine only football gives happiness. The fans love the game, and it is so important. When we won a match, we could feel that we gave the people a little happiness. It is hard though and it is getting harder."

Joe Biden promised to make democracy and human rights central to US foreign policy. But that means not insisting on Israel's right to defend itself without mentioning its ... END_OF_DOCUMENT_TOKEN_TO_BE_REPLACED

As the Biden administration attempts to promote democracy and human rights in the Middle East, it will confront the deep-seated belief among Arabs that U.S. policies are unfair to ... END_OF_DOCUMENT_TOKEN_TO_BE_REPLACED

Ben Aylon’s debut international album sees him elevate the traditional music and instruments of Senegal and Mali into a fresh contemporary setting. Seven years in the making, " ... END_OF_DOCUMENT_TOKEN_TO_BE_REPLACED

Years ago, the International Holocaust Remembrance Alliance formulated how hatred of Jews can be recognised. Now a new definition is causing controversy. By Sarah Judith Hofmann END_OF_DOCUMENT_TOKEN_TO_BE_REPLACED

The change in U.S. president is also having an impact on the conflict between Turkey and Greece. Since the USA has started to play the Greek card, the strategic situation in the ... END_OF_DOCUMENT_TOKEN_TO_BE_REPLACED

As someone accustomed to presenting his country to interested outsiders, Israeli teacher and tour guide Noam Yatsiv makes the case for a more nuanced appreciation of the ... END_OF_DOCUMENT_TOKEN_TO_BE_REPLACED
Author:
John Duerden
Date:
Mail:
Send via mail

END_OF_DOCUMENT_TOKEN_TO_BE_REPLACED
Social media
and networks
Subscribe to our
newsletter