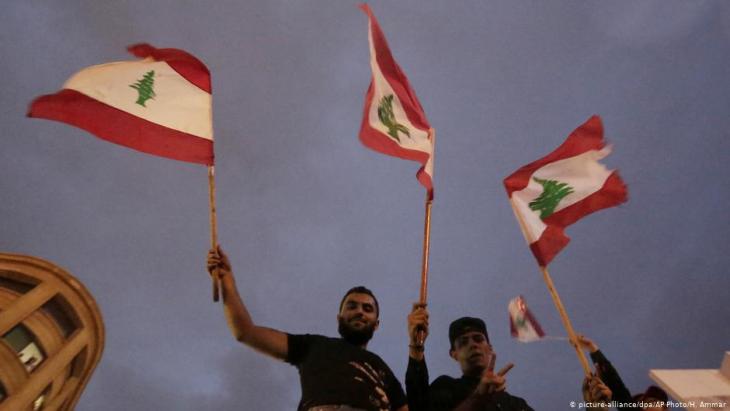 Demonstrators in Lebanon have been taking to the streets for days demanding the resignation of the government. So far, the government has offered little to pacify the people. How long can this go on? Diana Hodali reports

The weather in Lebanon is getting worse, rain clouds hang deep in the sky above the demonstrators in Beirut's inner city. But that is no deterrent. They wave their red-green national flags and add colour to the dreary grey, colour that stands for hope. The hundreds of thousands of people who have been demonstrating for seven days are demanding better living conditions – for themselves and for future generations.

"The only good thing politicians have done is to unite us," shouted a woman recently during the protests. Lebanese of all faiths and ages are demonstrating on the streets. While barricades were still burning in Beirut on the first evening, the atmosphere on the following days was more like a festival. The protests have spread to all areas of the country – including those where Shia Hezbollah is in charge or Sunni Prime Minister Saad Hariri.

The demonstrators are unanimous in their demands: they want an end to corruption, the resignation of Saad Hariri's government, new elections and politics free of sectarianism.

Against the traditional divisions

The city centre of Beirut is a perfect metaphor for the reasons for the Lebanese protests: once a place where the diversity of the city was evident, the quarter is now a privatised fortress of the post-war elite, with parliament in its heart, partly surrounded by barbed wire. Expensive shops and restaurants line the streets, and rents for offices or apartments are virtually unaffordable – at least for the vast majority of the population.

But over the past seven days, demonstrators have regained control of downtown Beirut. "I am here to tell the government to get the hell out – Lebanon is ours. We want a new Lebanon, we need to demand it here together," says an angry woman in her mid-forties. 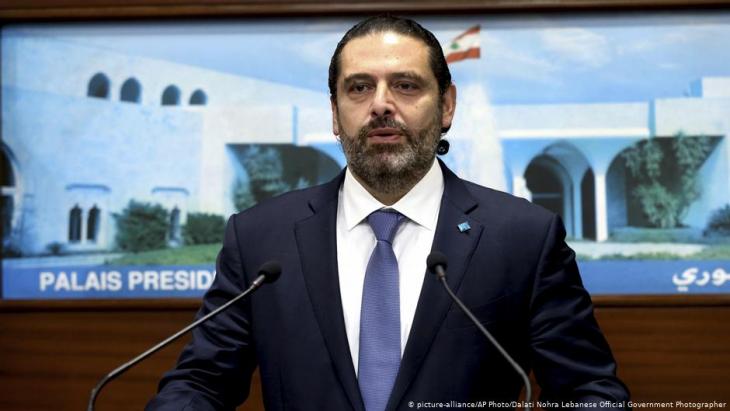 Saad Hariri under pressure: although the Lebanese prime minister has in the meantime announced reforms, they do not go far enough for the population. The protest movement in Lebanon has been mobilising representatives of all religions and age groups for days. The protests were triggered on 17 October by the government's announcement that it would tax WhatsApp calls. Two weeks later, they are directed against corruption and mismanagement in general, not to mention the country's elites, who in the 30 years since the end of the civil war have singularly failed to improve people's everyday lives

In order to avoid the traditional divisions within society that could undermine the movement, each group is concentrating on overthrowing the established political order in its own area. The Sunnis in northern Lebanon are tearing down portraits of Prime Minister Saad Hariri from their fortifications. Christians set fire to posters by Maronite President Michel Aoun. The Shia are scolding Hezbollah and singing songs against the Shia Amal movement of parliamentary president Nabih Berri. "All means all," the demonstrators in Lebanon have been calling since last week. They want to bring down the entire political elite – together.

With or without structure

But the pressing question that many people are asking is: how exactly? While some argue for the creation of structures and a representation of demonstrators in order to be able to give weight to the demands in possible negotiations, others are against it. The Lebanese journalist Diana Moukalled considers it important that the demonstrators have no representatives at the moment. "It will have to go on like this for at least a while. We have to keep up the pressure through the demonstrations," she says.

The ongoing protests are unprecedented in their nature and scale – even though they are spontaneous, decentralised and unorganised. "The demonstrators should not be urged to organise because this could lead to division and differences," says Diana Moukalled. And that's what they want to get over. Especially since there is currently no reason for the demonstrators to appoint a leadership. Four ministers of the Christian party "Lebanese Forces" have already resigned – even though Prime Minister Saad Hariri is still refusing to resign.

Rain or shine , the protesters are resigned to stay on the street and have dismissed the president’s speech #Lebanon #LebanonProtests pic.twitter.com/qJ3hGQs9Cx

Many were more than disappointed by Hariri's speeches, by Hassan Nasrallah of Hezbollah and also by President Michel Aoun. They all acted as if they had been prevented from reform by others, it is claimed from many quarters. Instead, the demonstrators have the support of university professors, judges and economists. They use their positions and stand on the side of the protesters. Students at their universities are pushing for their examinations to be postponed so that they can take part in the protests. Change through pressure seems possible.

"The demands of the people on the streets are clear," says the journalist. The current government must clear the way for new elections.

What if the army intervenes?

However, Joseph Bahout of Carnegie Endowment Middle East fears that a stalemate could arise in the long run, since Prime Minister Hariri does not want to resign at the moment. His reform proposals are likely to prove insufficient, however, and the demonstrators will not want to give up. In addition, the risk of violent incidents could increase.

Some clashes have already occurred – especially in the north of the country, demonstrators and security forces have clashed. In Beirut, the army faced off against the demonstrators just a few days ago as supporters of Shia Hezbollah and the Amal movement. Both parties denied having sent these troops. However, Hezbollah supporters are currently attacking demonstrators in Beirut. 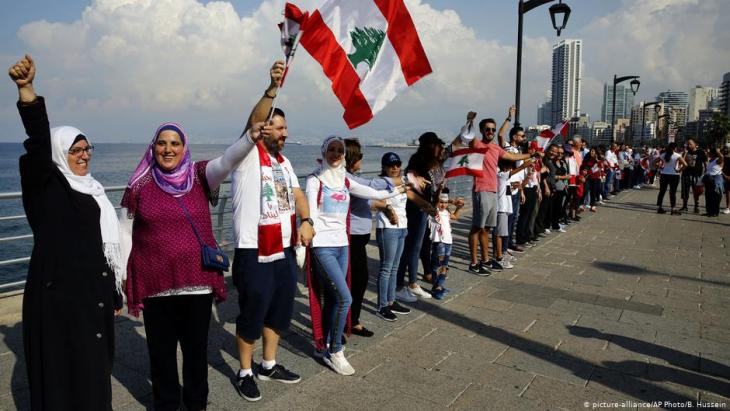 Hand-in-hand against nepotism, corruption and poor governance: on Sunday tens of thousands of Lebanese took part in a 170-kilometre-long human chain across the country. Around 100,000 men, women and children held hands from Tripoli in the north to Tyre in the south

Hariri had sworn to protect the demonstrators. The military leadership had warned that it would not tolerate aggression against the protest movement. "Nevertheless, the army is fulfilling its instructions, which it is dictating," says Shafik Abdelrahman of Tripoli-based non-governmental organisation Utopia, which deals with social issues. "For example, they are currently ensuring that the streets are opened against the will of the demonstrators," he says. "They stand between us and the rulers. I don't know how much longer this can go on."

When Hezbollah takes to the streets

Hezbollah, however, is said to have considerable influence on the armed forces. Therefore, many people are currently wondering how long it will tolerate the army's behaviour. For it too has become the target of protests – something that was not possible for a long time. Moreover, Hezbollah is not interested in the resignation of Hariri's government. "Both Michel Aoun and Hezbollah want him to stay in office because he is popular with both the international community and donors," Bahout writes. They also have no interest in changing the existing political system.

Hezbollah could use its influence on the army in the future to break the demonstrators' will. In his recent speech to the people, Hezbollah leader Hassan Nasrallah was already calling for the roadblocks to be broken.

But the demonstrators are not afraid of that at this time. They feel strong in their community: "I lived through the civil war in Lebanon, I have witnessed murders, the Syrian occupation and numerous protests," says Diana Moukalled. "But what is happening here is unique and we will not just give it up."

Food prices doubled, salaries halved, banks restricting withdrawals: Egyptians now have the same problems as the Lebanese. But if things get worse here, the fallout will be far ... END_OF_DOCUMENT_TOKEN_TO_BE_REPLACED

Lebanon was long viewed as the Switzerland of the Middle East. Until relatively recently, billions were deposited in its banks. Gulf states were among the foremost investors in ... END_OF_DOCUMENT_TOKEN_TO_BE_REPLACED

November 2022 sees the Arab world firmly in the spotlight with the COP27 in Egypt and the FIFA World Cup in Qatar. Public trust in MENA governments is weak, thanks to their ... END_OF_DOCUMENT_TOKEN_TO_BE_REPLACED

"You are not my guide... I am the compass. Iranian women have spoken, freed themselves, and unleashed a revolution despite smelling death. They have cut their braids in anger; ... END_OF_DOCUMENT_TOKEN_TO_BE_REPLACED

In “The Wrong End of the Telescope”, Rabih Alameddine draws us away from the headlines and into the personal story of one individual. Mina is complex, compelling and very real. By ... END_OF_DOCUMENT_TOKEN_TO_BE_REPLACED
Author:
Diana Hodali
Date:
Mail:
Send via mail

END_OF_DOCUMENT_TOKEN_TO_BE_REPLACED
Social media
and networks
Subscribe to our
newsletter