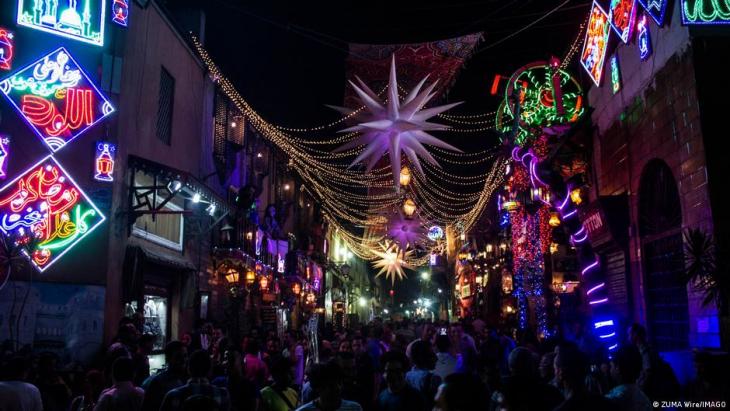 Ahead of Ramadan, most Middle Eastern countries have eased restrictions to near pre-pandemic times. However, increases in prices and food shortages due to the war in Ukraine are casting new shadows on the Holy Month. Jennifer Holleis reports

In the run-up to Ramadan, which began on 2 April in most countries, city centres across the Middle East were transformed. Streets and shops have been decorated with the symbol of the crescent moon, lanterns and banners are emblazoned with well-wishing words like "Ramadan Kareem" or "Ramadan Mubarak.".

In Lebanon's capital Beirut, however, much of the decoration on sale for private homes remained unsold this year. "I remember the times when I used to buy decorations for Ramadan and invite my siblings over for a large meal in the evening," said Randa Mohsen, a nurse and mother of four in Beirut. "This year, we can't even afford to pay for our own iftar meal that breaks the fast after sunset."

In order to prepare fattoush, a traditional iftar salad, Mohsen would have to buy ingredients for around €3.60, she says. Given that the family income is around €75, this is simply out of reach. "For us as a family, it doesn't matter whether the pandemic restrictions are removed or not, we don't have money to go out anyways, we can barely afford to eat," she said. "At least COVID-19 was an excuse to stay home."

For the past two years, or in other words, since the beginning of the pandemic, Ramadan traditions – such as meeting family and friends for meals after sunset – have been restricted or banned throughout the region. However, as of this Ramadan, only masks remain, as well as occasionally reduced prayer periods and social distancing inside mosques.

"Ahead of this Ramadan, most governments in the Middle East have removed or eased restrictions almost to a pre-pandemic level," Simon Wolfgang Fuchs, a lecturer of Islamic and Middle East Studies at the University of Freiburg, Germany, explained. 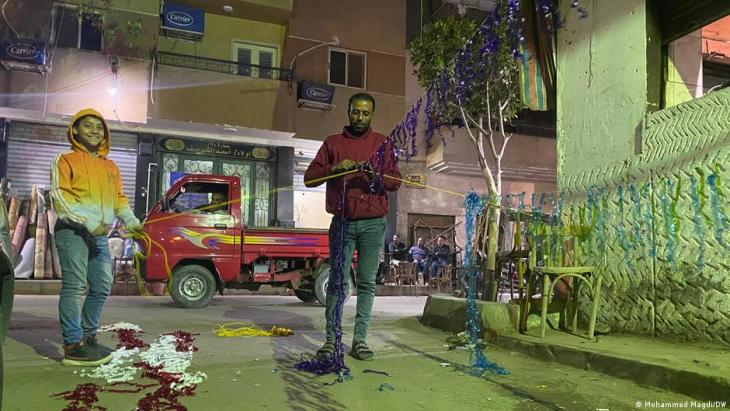 The origins of Ramadan: also spelled Ramazan and Ramzan, the month of fasting – one of the five pillars of Islam – is observed by about 1.6 billion Muslims globally. Adults who are physically and mentally healthy are required to not drink, eat or smoke from sunrise to sunset for 30 days. Muslims believe God revealed the first verses of the Koran to the Prophet Muhammad during the ninth month of the Islamic calendar around 1,400 years ago. The word Ramadan derives from "al-ramad" which means intense heat or fire and symbolises the hardship of fasting and the burning of sins

Sheikh Mohammed Abu Zaid, Chairman of the Sunni Court and imam of the largest mosque in Saida, near Beirut, confirmed the new freedom. "In Lebanon, all mosques are open and people are welcomed to gather and pray. Imams are free to ask for social distancing or to request wearing masks," said Abu Zaid. "However, most imams agreed to advise old people and those who have chronic diseases to not attend mosques."

For Ramadan's extended morning and evening prayers in his mosque, Abu Zaid decided to advise the faithful to wear masks.

And yet, with the end of many pandemic-related restrictions, new problems are casting their shadows on the Holy Month. "Inflation and food insecurity have started to affect many countries in the region at an unprecedented level," Fuchs said.

Egypt, in particular, has suffered from price hikes and a devaluation of the currency ahead of this Ramadan. "We expect Ramadan to be extremely hard as a soar in prices happened just a few days before the Holy Month," admitted Haitham El-Tabei, CEO of the Abwab Elkheir NGO in Cairo.

On Friday, a day before the beginning of Ramadan, around 20 volunteers met in the early hours at the NGO's headquarter in Cairo's Mokattam neighbourhood, to prepare food baskets with meat and dates. During Ramadan, they expect that more families than ever come by and pick up the food donations. "This year, the situation is exacerbated by a decrease in donations and a stark increase of prices," said El-Tabei.

So far, though, the NGO has been able to cover the extra costs. "In such a tough period, we cannot let families down during the Holy Month," he added. 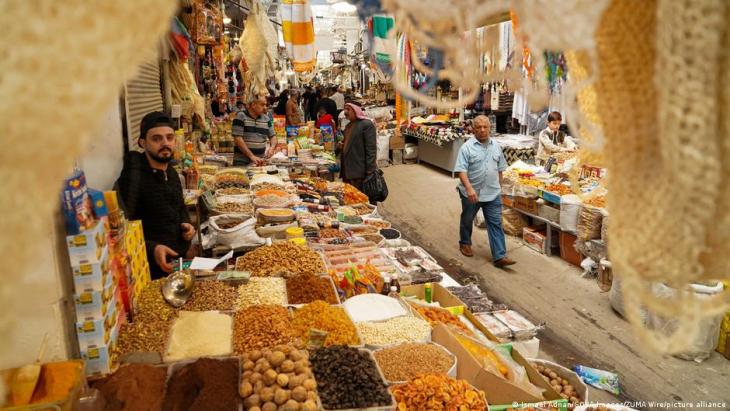 Holy month overshadowed by war in Ukraine: "Inflation and food insecurity have started to affect many countries in the region at an unprecedented level," explains Simon Wolfgang Fuchs, a lecturer of Islamic and Middle East Studies at the University of Freiburg, Germany. This comes on top of searing economic crises, poignantly expressed by Lebanese mother-of-four Randa Mohsen: "This year, we can't even afford to pay for our own iftar meal that breaks the fast after sunset." For fattoush, a traditional iftar salad, Mohsen would have to buy ingredients for around €3.60. With a family income of €75, this is simply out of reach. "For us as a family, it doesn't matter whether the pandemic restrictions are removed or not … we can barely afford to eat"

Ramadan, also spelled Ramazan and Ramzan, is observed by about 1.6 billion Muslims globally. Adults, who are physically and mentally healthy, are required to not drink, eat or smoke from sunrise to sunset for 30 days. The annual month of fasting and praying is considered one of the five pillars of Islam.

Muslims believe that God revealed the first verses of the Koran to Prophet Muhammad during the ninth month of the Islamic calendar around 1,400 years ago. The word Ramadan derives from "al-ramad" which means intense heat or fire and symbolises the hardship of fasting and the burning of sins.

The exact beginning of Ramadan, however, depends on the first glimpse of the rising moon, and therefore differs from country to country. Traditionally, the day and time are calculated by astronomy experts in the Saudi Arabian village of Hautat Sudair.

After two years and in line with most other countries in the region, Saudi Arabia has also lifted most of its restrictions in the run-up to this Ramadan. However, pilgrims are required to wear masks and use either the Tawakkalna or Eatmarna app when signing up for a prayer slot in Mecca and Medina. Using the governmental Tawakkalna apps became mandatory for Saudi citizens during the pandemic.

Welcome Guests of Allah in Makkah and Madinah.
We missed you and therefore lifted the travel restrictions.
Don’t forget to issue your Umrah permit easily via #Eatmarna after obtaining your electronic visa through the following link:https://t.co/Vvttu6B1mE pic.twitter.com/iKi61oZnof

The Saudi Data and Artificial Intelligence Authority (SDAIA) developed the app to monitor the movement of citizens during curfew hours. However, Simon Fuchs sees the prolonged mandatory use of these applications as a pretext. "The pandemic has given authoritarian regimes new tools to control their population under the pretext of health," he said.

Despite its efforts to become a new hotspot for tourists and foreign investment, Saudi Arabia has also been in the spotlight for neglecting human rights and sentencing or killing dissidents – like Loujain al-Hathloul or Jamal Khashoggi – in the past years.

However, it is not only Saudi Arabia that is keeping an eye on its citizens, other countries in the region have decided to uphold restrictions and limits. In Kuwait, iftar gatherings remain banned inside and outside mosques. Only distributing free pre-cooked meals is allowed.

And Morocco's government has just extended the ongoing state of emergency until 30 April, due to fears of a new COVID-19 surge, despite current low levels of infection. Moreover, the kingdom has been battling a severe drought and the situation is exacerbated by worries about food security due to the reduction of wheat imports as a consequence of the war in Ukraine.

So far, however, the state of emergency ends on 30 April. If not extended, the Eid ul Fitr celebration, which marks the end of Ramadan, could therefore be celebrated with friends and family on 3 May.

Welcome to the world of Al Qasar, where Arabic music collides head-on with punk and psychedelic to create something powerful and beautiful. "Who Are We" is a raucous, subversive ... END_OF_DOCUMENT_TOKEN_TO_BE_REPLACED

Egyptian authorities have Mada Masr in their sights once again after critical reporting. But the editor of the country's last independent news source is adamant they will continue ... END_OF_DOCUMENT_TOKEN_TO_BE_REPLACED

Like Christianity, Europe's history is one of migration. Both have strong roots in the Orient and in cultures thousands of years old. Cultural historian Bernhard Braun invites us ... END_OF_DOCUMENT_TOKEN_TO_BE_REPLACED

When she ascended the throne, millions of Muslims still lived under British rule. Later, Elizabeth II appealed for tolerance in a multi-religious society. She was the first ... END_OF_DOCUMENT_TOKEN_TO_BE_REPLACED

END_OF_DOCUMENT_TOKEN_TO_BE_REPLACED
Social media
and networks
Subscribe to our
newsletter