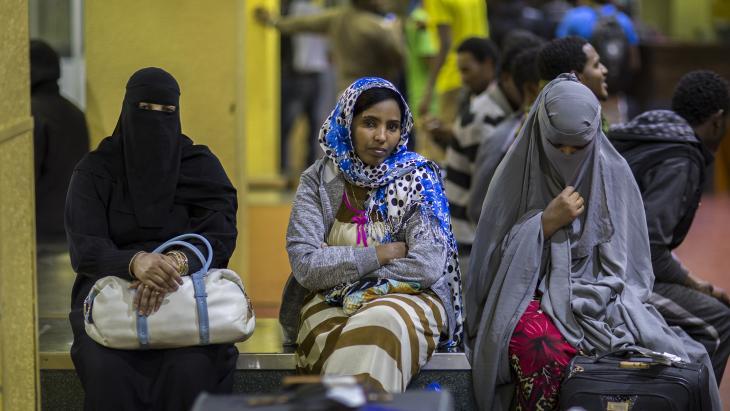 Thousands of migrant workers from Africa are currently living in degrading conditions in detention centres in Arab countries. A human rights organisation has accused the Gulf States of racism that is "structured to perfection". By Bernd Dörries and Dunja Ramadan

Hundreds of men are lying on the bare floor, many naked from the waist up. The men have an apathetic air, and some of them have scars on their backs. According to the British broadsheet Daily Telegraph, these photos were taken in Saudi Arabia, one of the richest countries in the world, by young Ethiopian migrants who came to the Gulf to work. Now they are no longer needed and are being held captive in living quarters that resemble internment camps.

"It is hell; we are treated like animals and beaten every day," reports one young Ethiopian. Some of the inmates have committed suicide, he says, the few toilets that are available are flooded with faeces, and there is hardly any drinking water. The Ethiopian Consul General in Jeddah has reported that Saudi Arabia has 53 prisons where Ethiopians are being held. One of them houses as many as 16,000 people.

Human rights organisations have called on Saudi Arabia to ensure humane conditions and to close down the detention centres. The Saudi embassy in London promised to deal with the issue, remarking that the pictures were "shocking and unacceptable".

The images, however, corroborate what guest workers have been reporting for years from many Gulf states, where they are held like slaves by their employers and are often abused. Local legislation makes migrants almost totally dependent on their employers, often not granting even minimal labour rights.

Those who dare to complain are at best simply cast out. It is not possible for them to leave the country of their own free will because migrant workers have to hand over their passports to their employer. Violent attacks on employees are not uncommon. The Ethiopian newspaper Addis Standard reported that corpses of guest workers from Arab states regularly arrive at Addis Ababa airport. 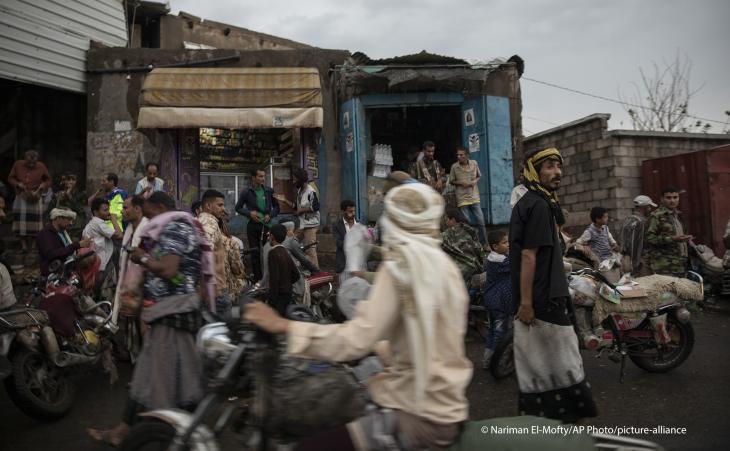 Dangerous transit route for migrant workers from East Africa: on their way to Saudi Arabia, many Ethiopians pass through Yemen, which is ravaged by civil war. When they reach their destination, they often find work, but also misery as migrant workers are often mistreated and exploited

Conditions in Saudi Arabia became so appalling that even the Ethiopian government decided to take action in 2016, prohibiting its citizens from going to work in the country. Last year, however, the ban was lifted again, not in all likelihood because circumstances had improved, but out of economic necessity. Millions of guest workers from Asia and East Africa work in the kingdom of Saudi Arabia, mostly as domestic help or construction workers. Despite the poor pay, they are able to send money home – money that is urgently needed there.

Many of these migrant workers have, however, become superfluous in recent years, ever since Crown Prince Mohammad bin Salman called on his countrymen to hire more Saudis in order to reduce unemployment. The Saudi government is now claiming that Ethiopia refuses to take back tens of thousands of its citizens, an allegation the government in Addis Ababa denies.

Racism in the Gulf States is "structured to perfection", writes Vani Saraswathi of the organisation Migrant Rights, which, among other activities, campaigns for the rights of migrant workers. In other wealthy countries, there are mixed neighbourhoods, public transport and facilities available to one and all. In the Gulf States, however, "segregation" prevails.

For the first time since 1989, Algeria‘s authoritarian regime has sent a military parade marching through Algiers. A formidable show of strength designed to impress rival regional ... END_OF_DOCUMENT_TOKEN_TO_BE_REPLACED

A stage, lights, a mesmerised audience: it looks like an Egyptian folkloric concert, but Umm Sameh is singing to heal the sick by driving out the demons that possess them END_OF_DOCUMENT_TOKEN_TO_BE_REPLACED

From the Euphrates to the Mekong, dams that ensure one country's water supply risk leaving others parched. But shared water resources can be a source of peace as well as conflict ... END_OF_DOCUMENT_TOKEN_TO_BE_REPLACED

Racism exists in the Arab world. People with dark skin are discriminated against and often see their rights curtailed. Activists have had enough of such treatment and are starting ... END_OF_DOCUMENT_TOKEN_TO_BE_REPLACED

Hosting major sports tournaments can confer prestige on a country, but in the case of Egypt, the 2021 Handball World Championship will do little to repair relations with either ... END_OF_DOCUMENT_TOKEN_TO_BE_REPLACED

END_OF_DOCUMENT_TOKEN_TO_BE_REPLACED
Social media
and networks
Subscribe to our
newsletter