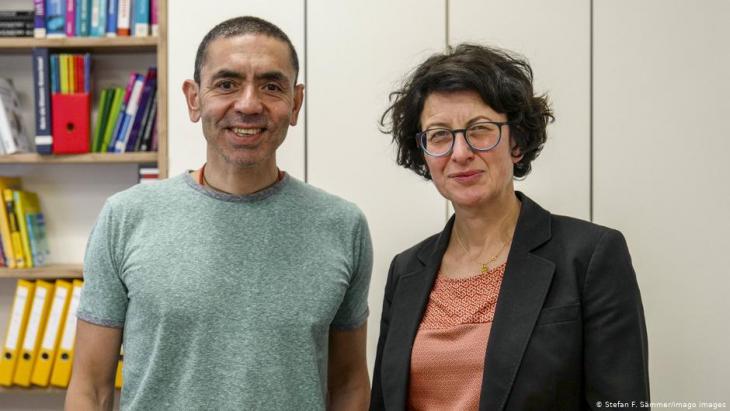 When news broke that a vaccine against COVID-19 developed by a Turkish-born couple in Germany had promising results, many media reports placed the ethnic background of these scientists above the importance of the story itself. While migrant entrepreneurship might still be regarded as something rare in Germany, research shows that more and more migrants are launching their own businesses. By Sertan Sanderson

The coronavirus continues to cost lives and wreck economies around the world, but an end might soon be in sight: a duo of researchers from Mainz, Germany, successfully tested the first promising vaccination against the disease and teamed up with pharmaceutical companies around the globe like Pfizer to begin the roll-out of the immunisation.

What surprised many about this story is not only the speed with which the vaccination was developed and the level of global cooperation it has prompted, but the fact that the married couple that discovered the vaccine has migration in their backgrounds: both their parents migrated to Germany half a century ago.

While newspapers rushed to report on the potential vaccine, many were also quick to underscore the fact that Dr. Uğur Şahin and Dr. Özlem Türeci had their family roots in Turkey – which is the single largest immigrant community in Germany.

And while the vast majority of the four million people with Turkish origins living in Germany are long considered integrated into German society, success stories like those of Dr. Şahin and Dr. Türeci are still being treated as exceptional narratives, especially when they succeed at entrepreneurship in the way that billionaires Şahin and Türeci have with their company, BioNTech.

Whether tabloid or broadsheet, the stories about Şahin and Türeci more often than not opened with the migrant background of the couple from Mainz, placing their ethnic background above the importance of the story itself.

This has prompted a renewed debate about immigrants to Germany and their social roles – especially in the workplace. While Germany has long been regarded as somewhat of a late bloomer in the start-up scene and in entrepreneurship in general, the number of people with a foreign background launching business in the country has grown by a third in the past 15 years, according to a study published by the Bertelsmann-Stiftung.

The scientists who developed the Pfizer/BioNTech Covid-19 vaccine are a Turkish-German power couple https://t.co/3skA0Fsssh pic.twitter.com/xiUPyGjekX

In absolute numbers, this means that today, there are nearly 800,000 immigrants and people with a foreign background living in Germany, who own their own business. These companies have created a sum total of 2.3 million jobs – a number that itself has doubled in that same time frame.

About 10% of all people with a foreign background living in Germany are business-owners today, the Bertelsmann study found. Meanwhile, native Germans have apparently moved away from starting businesses, with 300,000 fewer German-born entrepreneurs existing today than there were in 2005, according to the same study. According to another study published by the KfW Bank, this rise in immigrant founders of businesses in Germany means that a quarter of all startups are launched by people with a foreign background.

Armando García Schmidt, senior project manager at Bertelsmann, told the daily Süddeutsche Zeitung newspaper that part of the reason for this development is that Germans are far more risk-averse than foreigners, who often have a hard time entering the job-market, often facing prejudice for their names or appearance.

He also emphasised, however, that the financial incentive also plays a major role in this growing trend: "Entrepreneurship is a driving force for the creation of higher income and affluence."

There are also other reasons why foreign-born people like Dr. Şahin and Dr. Türeci tend to dive into the unknown of entrepreneurship much more willingly than risk-averse Germans. Süddeutsche Zeitung says that immigrants may hail from a culture that celebrates entrepreneurship more than Germans do, therefore instilling a cultural value in them to aspire to start businesses.

But it also cites less uplifting reasons: some foreigners who come to Germany may not have their qualifications recognised by Germany's highly codified educational standards. This has frequently been the case with migrants and refugees arriving in the country since 2015; many Syrian and Iraqi professionals have struggled to have their university diplomas recognised, having to resort to working in menial jobs until they could launch their own companies.

Some have even lost their certificates and degrees during their perilous journeys to Europe, unable to prove that they are in fact doctors, dentists or engineers. Certain professions such as law professionals also face such rigorous retraining measures to adapt to the German job market that some immigrants decide to forego the option of continuing their original career, opting instead for new professional paths in their life, which frequently involve entrepreneurship.

Entrepreneurship only option for many immigrants

And for others, it's often not even a choice to eventually start their own business but rather a dire necessity: according to the Federal Statistical Office of Germany (Statistisches Bundesamt), more than a third of foreign-born nationals living in Germany were in "atypical employment" in 2019. This means that they "either had a fixed-term job, worked less than 20 hours per week, were marginally employed or in temporary agency work." This is nearly twice the rate observed among native Germans.

Meanwhile, the German Economic Institute reports that across the EU, the rate of unemployed immigrants is nearly twice as high as that of nationals of the respective EU member states, with an average of 6% of EU nationals reporting being job-seekers – compared to 11% of foreigners living in the EU. In some EU member states like Spain and Greece, the rate of unemployed foreign nationals was reported to be well above 20% in 2019.

For many immigrants in Germany, the only way out of underemployment or even unemployment therefore is to simply start their own business, with many opting to open restaurants and shops.

Successful immigrants, refugees and foreign nationals serve as role models for scores of others like them in Germany who struggle to find their place not only in the job market but also in society in general. But the flipside of that same coin means that success is still regarded as an exception in immigrant communities.

The narrative of immigrants succeeding at what they do is far more common in countries that have a different relationship with migration. Nations like the US, Canada and even the UK have a different history, and have long accepted their role as a preferred destination of immigration for many foreign nationals. They also have their immigration regulations, but at the same time make allowances for immigration being a natural right, for example by operating naturalisation lotteries (as is the case in the US) or by introducing a points-system upon which one may qualify to immigrate (as is the case in Canada, and is currently being discussed in the UK).

Germany, on the other hand, has long struggled to identify where it fits in in the face of accelerating immigration to the country.

While Germany has largely accepted the initial wave of immigrants coming to Germany from places like Turkey, Italy and Spain to work as so-called "Gastarbeiter" (guest workers) since the 1960s, who came to help rebuild the economy of the country after World War II, the long-term approach to the more recent arrival of refugees and migrants from the last five years is still somewhat unclear.

Germany has introduced so-called "blue cards" as well as the "Fachkräfteeinwanderungsgesetz" for highly skilled workers seeking employment in Germany, but they have to qualify on multiple levels that are often only achievable for the educated elite. Furthermore, these permits only allow foreigners to work as employees but not as entrepreneurs.

Meanwhile, more foreign-born nationals could, however, still enter the world of entrepreneurship and create more jobs if they already are allowed to start businesses in Germany: according to the Bertelsmann study, the 10% rate of immigrant participation in entrepreneurship could easily rise to 15% within a few years if Germany lowered the hurdles in place to launching new businesses.

Home
Print
Newsletter
More on this topic
Immigration, Islamophobia and the AfD: Germany's "welcoming culture" – for some a dirty word2015 and the Syrian influx: Five years on, how has Germany's refugee policy fared?Interview with journalist and performance artist Michel Abdollahi: "People with dark hair always have to go the extra mile"Migration museum in Cologne: Recognising Germany's immigration society
Related Topics
Coronavirus, Economy, Immigration, Migration, Migration in Germany, Muslims in the West, Places of Dialogue, Policy on refugees and migration, Poverty, Refugees, Turkey and the EU
All Topics

Research project "The Global Qur'an", brainchild of Professor of Islamic Studies Johanna Pink and sponsored by the European Research Council, analyses the history and ... END_OF_DOCUMENT_TOKEN_TO_BE_REPLACED

As the Western world emerges from a holiday season made less festive by COVID-19, millions of children in Afghanistan are starting 2022 facing the prospect of famine, illness, and ... END_OF_DOCUMENT_TOKEN_TO_BE_REPLACED

A wedding extravaganza of bright colours, flowers, feasting and dancing, yet the bride, Nefie Eminkova, who comes from Bulgaria's Pomak – Muslim – minority, can see none of it. ... END_OF_DOCUMENT_TOKEN_TO_BE_REPLACED

Every year in December, the team at Qantara.de takes a look back at the articles that proved most popular with our readers. This year is no different. Here is a run-down of the ... END_OF_DOCUMENT_TOKEN_TO_BE_REPLACED

Jesus – Issa in Arabic – doesn’t merely enjoy the highest place among the prophets in the Koran. He is also revered in Islam’s mystical tradition for his message of love and mercy ... END_OF_DOCUMENT_TOKEN_TO_BE_REPLACED

The military in Sudan has never waged war against a neighbour, but it has already staged 17 coups. Tens of thousands of people are risking their lives to oust the military by ... END_OF_DOCUMENT_TOKEN_TO_BE_REPLACED
Author:
Sertan Sanderson
Date:
Mail:
Send via mail

END_OF_DOCUMENT_TOKEN_TO_BE_REPLACED
Social media
and networks
Subscribe to our
newsletter