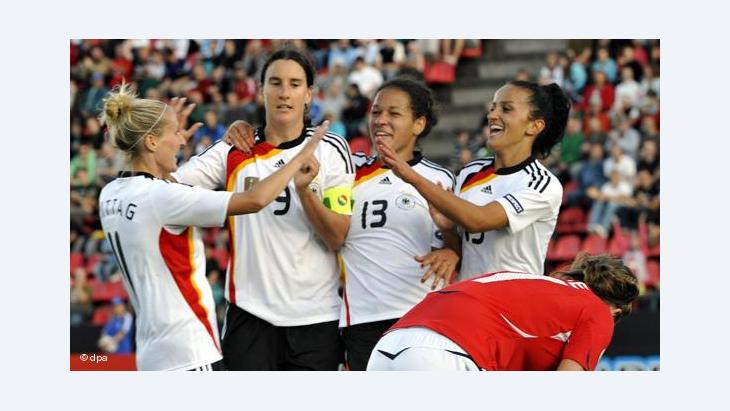 Migration in Germany
Football Can Contribute to Integration

Football in Germany is a powerful force in helping to integrate young people with an immigrant background. This is particularly the case for girl football players. Yet, there is still an intercultural deficit on the football field. Olivia Fritz reports

"My mother is very tolerant. We grew up here and, for the most part, live like typical Germans," says the 19-year-old Hasret Kayikci, who always enjoyed the support of her family. She currently plays in the German women's national football league. 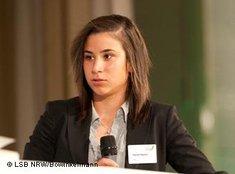 "Living like typical Germans": 19-year-old Hasret Kayikci already made it to the German junior selection

​​ The striker with Turkish roots is also familiar with the problems facing her circle of friends. "Some parents forbid their daughters from playing football. They also have to wear a headscarf."

According to Hasret, the options for young people are very limited. She was always allowed to play football – first in elementary school and then together with boys in a sports club. She later succeeded in making the leap to FCR Duisburg. Only recently, she was enticed away to join the shooting star of the German professional league, SC Freiburg.

Ever more young people with an immigrant background

She is still regarded as something of an exception. However, the number of young people with an immigrant background continues to rise in Germany. In large cities, such as Berlin and Cologne, as well as metropolitan areas such as the Ruhr region, they make up to 50 to 80 percent of certain districts, says Ulf Gebken from Oldenburg University. He heads the Institute for Integration through Sport and Education. 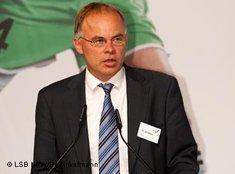 "No separate changing rooms for boys and girls": Ulf Gebken from Oldenburg University, head of the Institute for Integration through Sport and Education

​​Yet, while boys with Turkish roots now participate in organized football and martial arts courses to the same extent as German boys, girls still remain underrepresented.

Only 20 percent of girls participate in organized sports, estimates Gebken. "This indicates that there is a great need for many more girls to regularly take part in sports and to be able to participate in the activities of sports clubs."

Parents, in particular, have a number of concerns. Many are simply scared off by the costs of sports equipment, the late training times, and many other unresolved issues, explains Gebken.

"I am shocked to find that in many sports clubs there are no separate sanitary facilities or changing rooms for boys and girls." Girls are still given the worst training fields and also the most inconvenient times to play football. "Of course, this doesn't tend to encourage parents to allow their girls to play football."

Religious traditions not taken into consideration

In addition, there is still a considerable lack of intercultural understanding. For example, many sports clubs are unfamiliar with religious rituals, such as customs observed during Ramadan, and there are no efforts made to help parents overcome any existing fears. German sports clubs are also generally ignorant of the various regulations concerning hygiene with respect to clothing and meals. 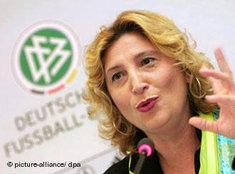 Sense of community and feelings of belonging: Gül Keskinler, integration commissioner of the German Football Association

​​The greatest problem, however, is language, says Gebken. Many parents are not even capable of filling out application forms for sport activities.

Gül Keskinler is quite familiar with such hurdles. She was born in Turkey and is the integration commissioner of the German Football Association (DFB) and member of the task force against violence, racism, and xenophobia for the DFB and the German Football League (DFL). Keskinler also promotes the increased employment of female trainers in sports clubs to provide young girls with role models.

According to Keskinler, football, as a team sport, provides a great opportunity to develop a sense of community and feelings of belonging in children and young people. "I think that these are the most important feelings that immigrants need in this society."

On this point, Ulf Gebken can only agree. He has observed this in many sports projects, where football has helped girls to change their perception of traditional gender roles. Football thereby serves as a vehicle for emancipation. "A Turkish girl able play football can enjoy an incredible sense of respect – from her brothers, cousins, father, and schoolmates. Suddenly, Lebanese, Turkish, and Arab boys applaud and encourage her, because they never expected that girls could play football."

And that they can! Hasret has already made it to the German junior selection. Her main goal is to get a position on the A national team. She feels a bond with the German national team, in which players like Lira Bajramaj and Célia Okoyino da Mbabi battle for goals. For this reason, she became a German citizen. "I was born and grew up here, and I don't expect to ever move to Turkey. This is why my parents supported my decision."

Education for girls and women is still possible in Afghanistan, says Reinhard Eroes of the Kinderhilfe Afghanistan initiative. In interview with Elisa Rheinheimer, he talks about ... END_OF_DOCUMENT_TOKEN_TO_BE_REPLACED

We are in favour of human rights. But One Love armbands are self-righteous and ignore some fundamental issues. Stefan Buchen examines the debate surrounding the World Cup in Qatar END_OF_DOCUMENT_TOKEN_TO_BE_REPLACED

In Doha, Arabs from Morocco, Tunisia, Egypt and Algeria are gathering to celebrate the first ever FIFA World Cup to be held on Arab soil. The criticism from Europe? Over the top, ... END_OF_DOCUMENT_TOKEN_TO_BE_REPLACED

Canan Topcu came from Turkey to Germany as a child. In her essay, she describes how bothered she was by the racism she encountered in her country of origin when she travelled ... END_OF_DOCUMENT_TOKEN_TO_BE_REPLACED

All organisers use major sporting events like this year’s FIFA World Cup in Qatar primarily to advertise their country and promote a slick public image. This is not something we ... END_OF_DOCUMENT_TOKEN_TO_BE_REPLACED

A leading light of Israeli theatre, Ofir Henig has directed the Israel Festival and is the only female director to have been awarded the Israel Theatre Prize. These days, however ... END_OF_DOCUMENT_TOKEN_TO_BE_REPLACED
Author:
Olivia Fritz
Date:
Mail:
Send via mail

END_OF_DOCUMENT_TOKEN_TO_BE_REPLACED
Social media
and networks
Subscribe to our
newsletter