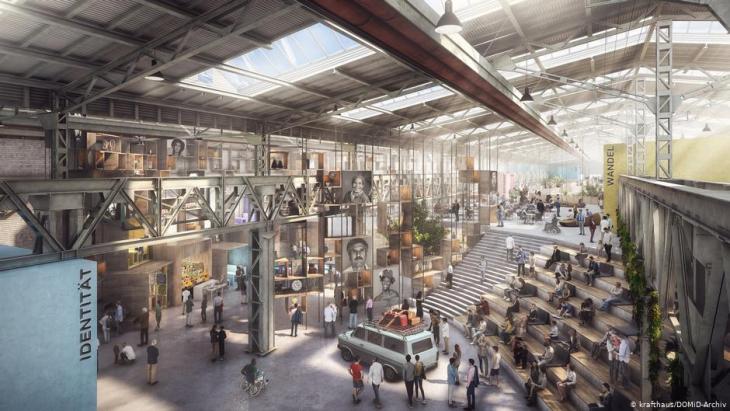 There's not much to see yet, but it's clear that Cologne will be home to a new museum dedicated to migration. The government will provide funding to see the Central Museum of Migration built in an old industrial hall. By Stefan Dege

The German Parliament has recently pledged a budget of €22 million to create a new museum dedicated to migration; the same amount will be provided by the state of North Rhine-Westphalia. The City of Cologne is contributing to the project by providing the former "Hall 70" of the engine manufacturer Klockner-Humboldt-Deutz.

The funding for the operation of the future museum – the Central Museum of Migration – has not been determined yet, but talks are underway and positive, said Robert Fuchs, managing director of the association Documentation Center and Museum of Migration in Germany (DOMiD).

This was cause for celebration for Fuchs and his association. Meanwhile supported by a team of over 10 people – including museologists, ethnologists and researchers – they have been campaigning for the creation of a Migration Museum for almost 30 years. "At the time, people still believed that Germany's 'guest workers' would eventually return to their home country," the historian said, "but our group believed in permanent residency of immigrants – and we wanted to document the development."

The association's members obtained items from companies and clubs that variously reflect the process of migration – from migrants' passports and flight tickets to portable radios, with which people heard news from their home countries, and cassettes with recorded messages sent from family members across borders. The largest object in their collection so far is a historic Ford Transit bus, which travelled countless times back and forth between Germany and Turkey. "We've parked it at the Ford company in Cologne for now," said Fuchs, "because our space in the district town hall Cologne-Ehrenfeld is not big enough for all our treasures."

The collection currently contains some 150,000 items: cassettes from Turkey, newspapers from Poland, clothes from Senegal. The objects are currently kept in dust-tight storage in the depot. Along with the objects collected in Germany, a larger group of items from Africa was added, as well as the humanitarian organisation Cap Anamur's collection, which recalls the rescue of Vietnamese refugees in the South China Sea, known as "boat people", 40 years ago. Christel Neudeck, the wife of Cap Anamur founder Rupert Neudeck, personally brought the objects to DOMiD.

Each exhibit represents a piece of migration history. In the new museum, Fuchs, however, does not want to present this history chronologically, but rather in special "concept spaces", through which broad terms such as "identity", "change", "border", or even "foreignness" are to be explained and illustrated. For Fuchs, the museum is to represent how Germany is a society of immigrants, and one that allows the voices of migrants to be heard. The historian hopes to change the understanding of history in Germany by examining the immigrants' perspective.

An architect's model shows what the Central Museum of Migration could look like: bathed in warm light, its design is reminiscent of a huge train station hall. People are sitting on the steps of an atrium, leading down to the largest object in the collection – the Ford Transit heavily laden with suitcases.

DOMiD expects the museum to open in 2023. Meanwhile, the collection can already be viewed in the "Virtual Migration Museum", an online project funded by the Federal Agency for Political Education which kicked off last year.

German Middle East analyst Guido Steinberg and television journalist Ulrich Tilgner have both published new books on the conflicts in the Middle East. Their analyses and their ... END_OF_DOCUMENT_TOKEN_TO_BE_REPLACED

On 7 March, Switzerland became the latest European country to vote in favour of a so-called "burka" ban. It was yet another feather in the cap of the right-wing populist Swiss ... END_OF_DOCUMENT_TOKEN_TO_BE_REPLACED

Syrian-born Rafik Schami is a gifted storyteller and one of the most successful authors writing in German today. In his 50 years in exile in Germany, he has introduced the Arab ... END_OF_DOCUMENT_TOKEN_TO_BE_REPLACED

The Syrian war has moved through many phases and included a number of changing actors. But one aspect has remained constant throughout: the Assad regime is using the conflict to ... END_OF_DOCUMENT_TOKEN_TO_BE_REPLACED

It's no secret that the Baha'i community in Iran is persecuted. Now, a document has come to light that appears to show the extent to which the repression is state-sponsored. By ... END_OF_DOCUMENT_TOKEN_TO_BE_REPLACED
Author:
Stefan Dege
Date:
Mail:
Send via mail

END_OF_DOCUMENT_TOKEN_TO_BE_REPLACED
Social media
and networks
Subscribe to our
newsletter