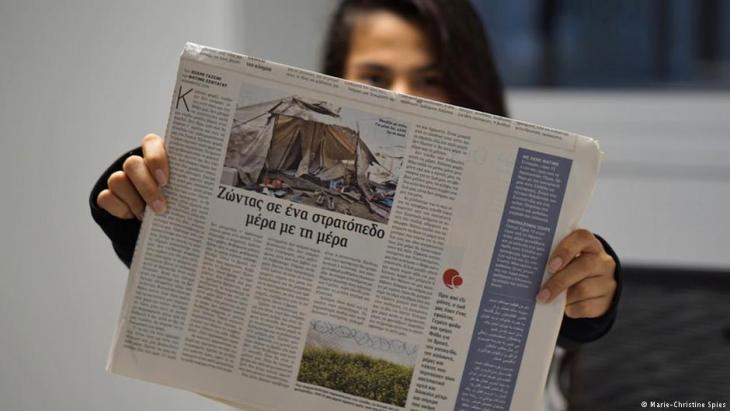 The idea originated in a Greek refugee camp: fifteen young Afghan women founded "Migratory Birds" – a newspaper made by refugees for refugees. For the young authors, reporting about their own lives is an act of self-empowerment. By Gordon Wullner

Ever since birth, Mahdia Hosseini has been reminded of her "worthlessness". She was born to an Afghan refugee family living in Iran, where she faced a "permanent psychological and intellectual battle," as she describes it.

Classmates bullied her, officials discriminated against her. And because she is a woman, she also suffered in her own community. "An Afghan woman has a lot to say but has not learned to speak," she would later write in an article. "Only men are allowed to shout, hit and be impatient."

These are passages from "Migratory Birds", a multilingual newspaper by refugees for the global refugee community. Mahdia Hosseini, 28, is editor-in-chief of the publication, which is being produced in Greece. It can also be found as a supplement on weekends in the Greek daily Efimerida ton Syntakton, which supports the production of "Migratory Birds".

"Isn't it time to break down the barriers that have surrounded me all my life," she asks in one of her articles. "Migratory Bird's Newspaper" prints articles in five different languages.

A platform for women

Flashback to 2016: large refugee movements into Europe were underway and the residents of Schisto refugee camp in Athens got used to the international journalists who frequently come to the camp looking for stories. They were not welcome. 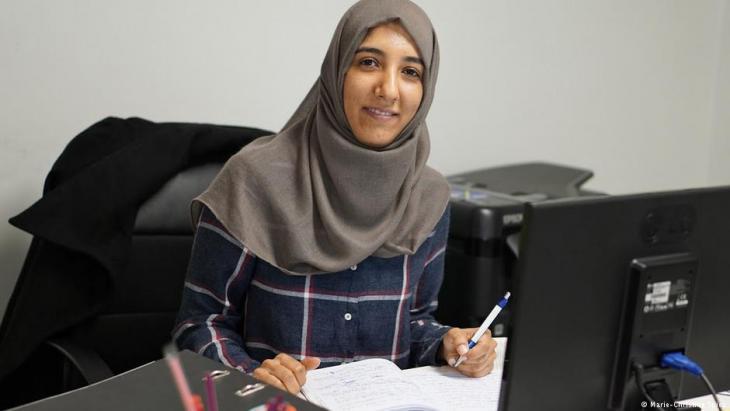 "Isn't it time to break down the barriers that have surrounded me all my life?" – Mahdia Hosseini, 28, editor-in-chief of the Migratory Birds newspaper, which is produced in Greece and printed in five different languages

"No-one wanted to speak to them," recalls Mahdia Hosseini, who lived in the camp after migrating from Iran to Europe. "The inhabitants didn't believe that any interview they gave would ever reach the people it should," she says. "So we decided to become reporters ourselves and be the voice of the refugees."

Fourteen other Afghan girls, mostly minors, liked Mahdia's idea of writing about their own past, life in the camp and future goals.

Their vision was to establish their own newspaper. However, men and boys in the camp didn't particularly like the idea of having young female refugees being the ones to ask them questions rather than international journalists. "They did not believe in us and said that women cannot be journalists," Mahdia remembers.

But the young women would not be discouraged. They continued to develop their ideas and hold editorial meetings. Eventually, the Network for Children's Rights, a Greek NGO, caught wind of their ambitious idea and reached out to funding groups such as the UN Refugee Agency (UNHCR) and the European Union, turning the young women's vision into reality.

The first issue of Migratory Birds was printed in April 2017 with articles in Farsi, Greek and English. Today, 13,000 copies per issue are distributed in camps and social organizations all over Greece. 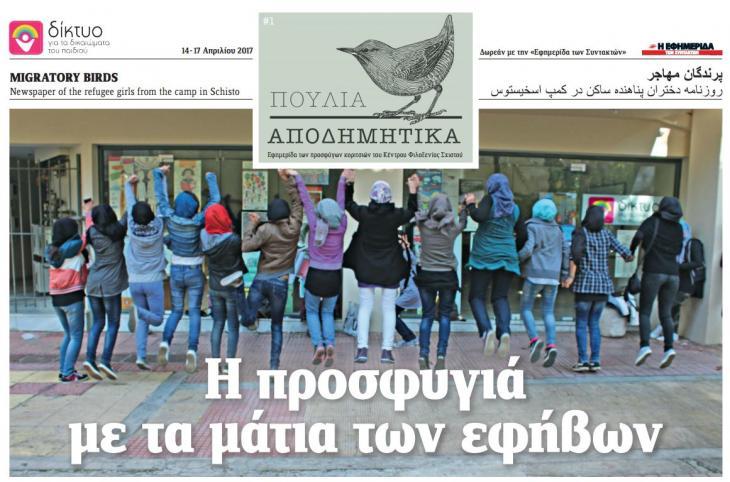 The launch of an innovative media project: in April 2017, the first issue of "Migratory Birds" went into print with articles in Farsi, Greek and English. Today 13,000 copies are distributed in the camps and social facilities of the refugee aid. With the help of the "Network for Children's Right", a Greek youth aid organisation, the initiators were able to find donors such as the UNHCR and the EU

Like previous issues, the 11th issue has been published and together with the Greek newspaper Efimerida ton Sintakton ("Journalists' Journal").  Migratory Birds now includes content in five languages, including Arabic and Urdu.

The online version also features English translations of the articles. "Because we suffer, we are trying to speak a lot about what is happening to us, to show everyone how we are treated and how they can help us," says 18-year old Syrian author Mo Alrifai. A boy on the team?

"At first it was only girl power, but now boys and girls work together in perfect equality," says Albanian-Greek journalist Denisa Bajraktari, 28, whose job it is to supervise the newspaper project. "What is also great for integration is what they learn about democratic rights," she adds. "Most young authors come from countries without freedom of expression. Now they have this freedom – and know how to use it."

At first, the newspaper was not intended to be multilingual, Bajraktari explains. "That came along the way. So many people with different languages just wanted to be a part of it, because everybody can contribute in different ways."

If somebody does not want to write, or cannot because of illiteracy, he or she can take photos. Online radio also arose out of the project. "Or somebody might just contribute to our editorial meetings," Bajraktari says. Greeks participate in the project as well, making it a platform for exchange between refugees and locals.

The authors come and go, move on in Europe or return. The newspaper was named after the shared hope of all contributors that "one day they would fly in the direction of happiness and joy."

For editor-in-chief Mahdia Hosseini, that place could be Germany. "My father and sisters are living there," she says, promising that if she gets there, the "Migratory Bird" will build its nest there too.

Education for girls and women is still possible in Afghanistan, says Reinhard Eroes of the Kinderhilfe Afghanistan initiative. In interview with Elisa Rheinheimer, he talks about ... END_OF_DOCUMENT_TOKEN_TO_BE_REPLACED

A lawmaker in Pakistan's rugged northwest was sipping tea with voters when his phone chirped to life – the Taliban were calling with a demand for 'donations'. "We hope you won't ... END_OF_DOCUMENT_TOKEN_TO_BE_REPLACED

Cries of "Benghazi!" still resonate across the USA ten years after a deadly terrorist attack in Libya killed the U.S. ambassador and three other Americans. Ethan Chorin re-tells ... END_OF_DOCUMENT_TOKEN_TO_BE_REPLACED

Sufism has fluid boundaries. Just like Islam, Sufism is inconceivable without its late antique roots. Then again, it has also exerted an influence on Hinduism. Moreover, the Sufic ... END_OF_DOCUMENT_TOKEN_TO_BE_REPLACED

Journalist Waslat Hasrat-Nazimi was forced to flee Afghanistan with her family as a child and grew up in Germany. To mark the publication of her book "The Lionesses of Afghanistan ... END_OF_DOCUMENT_TOKEN_TO_BE_REPLACED

Just as the Islamic Revolution fundamentally changed Iran 43 years ago and had an impact far beyond the country's borders, the current wave of protests sweeping the country is set ... END_OF_DOCUMENT_TOKEN_TO_BE_REPLACED
Author:
Gordon Wüllner
Date:
Mail:
Send via mail

END_OF_DOCUMENT_TOKEN_TO_BE_REPLACED
Social media
and networks
Subscribe to our
newsletter