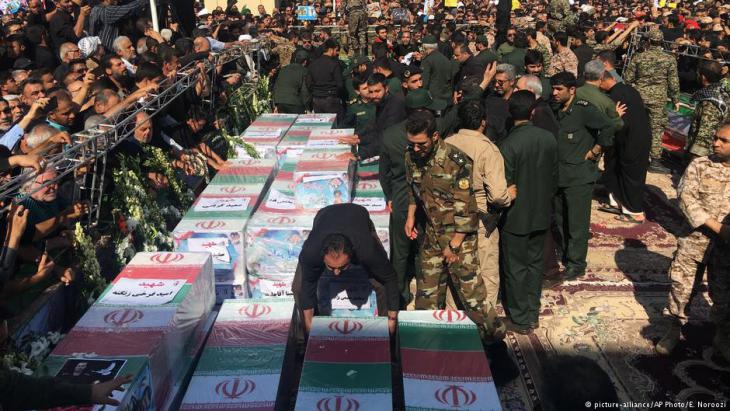 Following this weekendʹs attack on a military parade in the southern Iranian city of Ahwaz, fears that the United States, Saudi Arabia and others may seek to destabilise the country by instigating ethnic unrest are rife, writes James M. Dorsey, raising the likelihood of a clampdown against opposition groups at home and abroad

With competing claims of responsibility by the Islamic State and the Ahvaz National Resistance for the attack that killed 29 people and wounded 70 others in the oil-rich province of Khuzestan, which borders on Iraq and is home to Iran’s ethnic Arab community, it is hard to determine with certainty the affiliation of the four perpetrators, all of whom were killed in the incident.

Statements by Iranian officials, however, accusing the United States and its allies, Saudi Arabia, the United Arab Emirates and Israel, suggest that they see the Ahvaz group rather than the Islamic State as responsible for the incident, the worst since the Islamic State attacked the Iranian parliament and the mausoleum of Ayatollah Ruhollah Khomeini in Tehran in 2017.

Iran’s summoning, in the wake of the attack, of the ambassadors of Britain, the Netherlands and Denmark, countries from which Iranian opposition groups operate, comes at an awkward moment for Tehran. It complicates Iranian efforts to ensure that European measures effectively neutralise potentially crippling U.S. sanctions that are being imposed as a result of the U.S. withdrawal in May from the 2015 international agreement that curbed the Islamic republic’s nuclear programme.

Ahvaz-related violence last year spilled on to the street of The Hague when unidentified gunmen killed Ahwazi activist Ahmad Mola Nissi. Mr. Nissi was shot dead days before he was scheduled to launch a Saudi-funded television station staffed with Saudi-trained personnel that would target Khuzestan, according to Ahwazi activists.

This week, a group of exiled Iranian academics and political activists, led by The Hague-based social scientist Damon Golriz, announced the creation of a group that intends to campaign for a liberal democracy in Iran under the auspices of Reza Pahlavi, the son of the ousted Shah of Iran who lives in the United States. 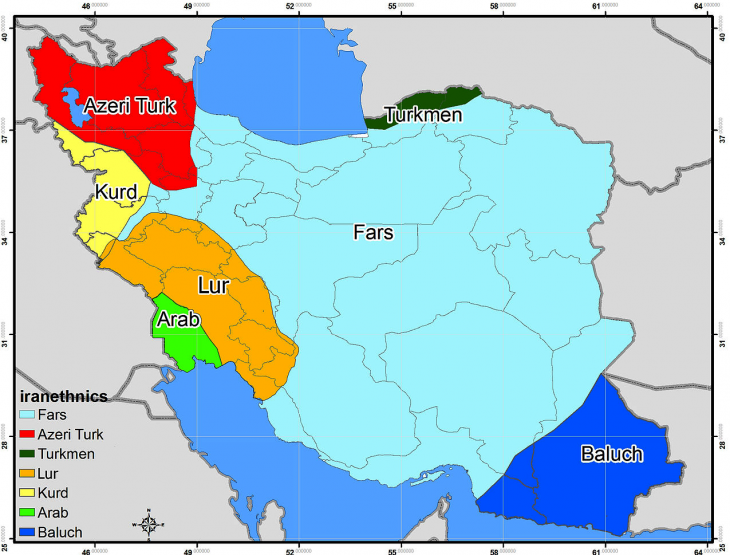 An emerging pattern: "if the terrorist attack in Ahvaz was part of a larger Saudi and UAE escalation in Iran, their goal is likely to goad Iran to retaliate, using Tehran’s reaction to spark a larger war and force the U.S. to enter… The terrorist attack is as much about trapping Iran into war as it is about trapping the U.S. into a war of choice," said Trita Parsi of the National Iranian American Council

While Iran appears to be targeting exile groups in the wake of the Ahvaz attack, Iran itself has witnessed in recent years stepped up activity by various insurgent groups amid indications of Saudi support, leading to repeated clashes and interception of Kurdish, Baloch and other ethnic insurgents. Last month, Azeri and Iranian Arab protests erupted in soccer stadiums while the country’s Revolutionary Guards Corps reported clashes with Iraq-based Iranian Kurdish insurgents.

State-run television warned at the time in a primetime broadcast that foreign agents could turn legitimate protests stemming from domestic anger at the government’s mismanagement of the economy and corruption into "incendiary calls for regime change" by inciting violence that would provoke a crackdown by security forces and give the United States fodder to tackle Iran.The People’s Mujahedin Organisation of Iran or Mujahedin-e-Khalq (MeK), a controversial exiled opposition group that enjoys the support of serving and former Western officials, including some in the Trump administration, as well as prominent Saudis such as Prince Turki al-Faisal, a former Saudi intelligence chief, who is believed to be close to Saudi Crown Prince Mohammed bin Salman, has taken credit for a number of the protests in Khuzestan.

The incidents fit an emerging pattern, prompting suggestions that if a Gulf-backed group was responsible for this weekend’s attack, it may have been designed to provoke a more direct confrontation between Iran and the United States.

"If the terrorist attack in Ahvaz was part of a larger Saudi and UAE escalation in Iran, their goal is likely to goad Iran to retaliate, using Tehran’s reaction to spark a larger war and force the U.S. to enter, since Riyadh and Abu Dhabi likely cannot take on Iran militarily alone… If so, the terrorist attack is as much about trapping Iran into war as it is about trapping the U.S. into a war of choice," said Trita Parsi of the National Iranian American Council.

Iran appears with its response to the Ahvaz attack to be saying that its fears of U.S. and Saudi destabilisation efforts are becoming reality. The Iranian view is not wholly unfounded. Speaking in a private capacity on the same day as the attack in Ahvaz, U.S. President Donald J. Trump’s personal lawyer, Rudolph Giuliani, declared that U.S.. sanctions were causing economic pain that could lead to a "successful revolution" in Iran.

"I don’t know when we’re going to overthrow them. It could be in a few days, months, a couple of years. But it’s going to happen," Giuliani told an audience gathered in New York for an Iran Uprising Summit organised by the Organisation of Iranian-American Communities, a Washington-based group associated with the Mujahedeen-e-Khalq. Together with John Bolton, Trump’s national security advisor, Giuliani is a long-standing supporter of the Mujahedeen-e-Khalq that calls for the violent overthrow of the Iranian regime.

Bolton, last year before assuming office, drafted at the request of Trump’s then strategic advisor, Steve Bannon, a plan that envisioned U.S. support "for the democratic Iranian opposition", "Kurdish national aspirations in Iran, Iraq and Syria", and assistance for Iranian Arabs in Khuzestan and Baloch in the Pakistani province of Balochistan and Iran’s neighbouring Sistan and Balochistan province.

The Trump administration has officially shied away from formally endorsing the goal of toppling the regime in Tehran. Bolton, since becoming national security advisor, has insisted that U.S. policy was to put "unprecedented pressure" on Iran to "change its behaviour", not its regime. Bolton and Giuliani’s inclination towards regime change is, however, shared by several U.S. allies in the Middle East and circumstantial evidence suggests that their views may be seeping into U.S. policy moves without it being officially acknowledged.Moreover, Saudi support for confrontation with Iran precedes Trump’s coming to office but has intensified since, in part as a result of King Salman’s ascendance to the Saudi throne in 2015 and the rise of his son, Prince Mohammed. Already a decade ago, Saudi Arabia’s then King Abdullah urged the United States to "cut off the head of the snake" by launching military strikes to destroy Iran’s nuclear programme.

Writing in 2012 in Asharq Al Awsat, a Saudi newspaper, Amal Al-Hazzani, an academic, asserted in an op-ed entitled "The oppressed Arab district of al-Ahwaz" that Khuzestan "is an Arab territory... Its Arab residents have been facing continual repression ever since the Persian state assumed control of the region in 1925... It is imperative that the Arabs take up the al-Ahwaz cause, at least from the humanitarian perspective." 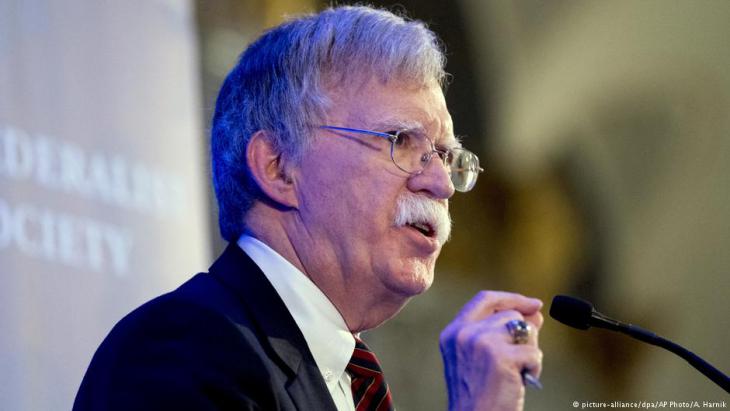 Despite the hawks in its ranks, the U.S. administration has officially shied away from formally endorsing the goal of toppling the regime in Tehran. Since becoming Donald Trump's national security adviser, long-standing supporter of the Mujahedeen-e-Khalq, John Bolton has softened his tone. Now he insists that U.S. policy is to put "unprecedented pressure" on Iran to "change its behaviour"

More recently, Prince Mohammed vowed that "we won’t wait for the battle to be in Saudi Arabia. Instead, we will work so that the battle is for them in Iran."

Abdulkhaleq Abdulla, a prominent UAE scholar, who is believed to be close to Emirati Crown Prince Mohammed bin Zayed, played into Iranian assertions of Gulf involvement in this weekend’s attack by tweeting that it wasn’t a terrorist incident. Abdulla suggested that "moving the battle to the Iranian side is a declared option" and that the number of such attacks "will increase during the next phase."

A Saudi think tank, believed to be backed by Prince Mohammed last year called in a study for Saudi support for a low-level Baloch insurgency in Iran. Prince Mohammed vowed around the same time that "we will work so that the battle is for them in Iran, not in Saudi Arabia." Pakistani militants have claimed that Saudi Arabia has stepped up funding of militant madrassas or religious seminaries in Balochistan that allegedly serve as havens for anti-Iranian fighters.

The head of the U.S. State Department’s Office of Iranian Affairs, Steven Fagin, met in Washington in June with Mustafa Hijri, head of the Kurdistan Democratic Party of Iran (KDPI), before assuming his new post as counsel general in Erbil in Iraqi Kurdistan. The KDPI has recently stepped up its attacks in Iranian Kurdistan, killing nine people weeks before Hijri’s meeting with Fagin. Other Kurdish groups have reported similar attacks. Several Iranian Kurdish groups are discussing ways to coordinate efforts to confront the Iranian regime. Similarly, the Central Intelligence Agency (CIA) last year appointed a seasoned covert operations officer as head of its Iran operations.

Said Saudi Ambassador to the United States Prince Khalid bin Salman, Prince Mohammed’s brother: President "Trump makes clear that we will not approach Iran with the sort of appeasement policies that failed so miserably to halt Nazi Germany’s rise to power, or avert the costliest war ever waged."

Dr. James M. Dorsey is a senior fellow at the S. Rajaratnam School of International Studies, co-director of the University of Wurzburg’s Institute for Fan Culture, and co-host of the New Books in Middle Eastern Studies podcast. He has published several books, most recently "China and the Middle East: Venturing into the Maelstrom"

The recent escalation of violence in Idlib is also a result of the increasing tensions between Turkey and Russia. The victims are those in Idlib, caught up in a hopeless situation ... END_OF_DOCUMENT_TOKEN_TO_BE_REPLACED

The 2015 Joint Comprehensive Plan of Action with Iran is in jeopardy. European governments should use the JCPOA’s dispute-resolution mechanism both to pursue immediate measures to ... END_OF_DOCUMENT_TOKEN_TO_BE_REPLACED

Many predominantly Muslim countries have penal laws against "blasphemy", "defamation of religion" and "apostasy". In practice they serve as highly effective weapons to settle ... END_OF_DOCUMENT_TOKEN_TO_BE_REPLACED

These days you might be forgiven for wondering whether international relations would be better served by artists than politicians. Iranian Kayhan Kalhor, a bridge builder from the ... END_OF_DOCUMENT_TOKEN_TO_BE_REPLACED

As we digest the details of Donald Trump's Vision for Peace, we need to ask ourselves just one question: does this draft guarantee an Israeli and a Palestinian baby born today ... END_OF_DOCUMENT_TOKEN_TO_BE_REPLACED

As expected the Trump administration released its Israeli-Palestinian peace blueprint on Tuesday, a plan that ignores the Palestinians at the expense of lasting peace. Middle East ... END_OF_DOCUMENT_TOKEN_TO_BE_REPLACED
Author:
James M. Dorsey
Date:
Mail:
Send via mail

END_OF_DOCUMENT_TOKEN_TO_BE_REPLACED
Social media
and networks
Subscribe to our
newsletter