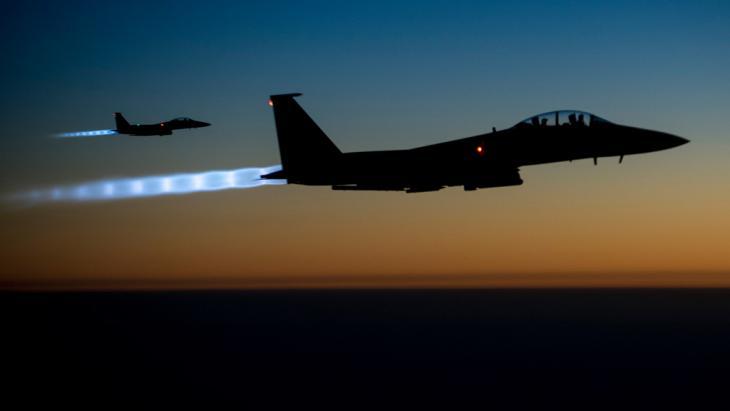 Military strikes against IS
Fragile alliance

The fight against IS is bringing East and West closer together and uniting the Arabs at the same time. However, it is possible that this alliance will only be of short duration. By Birgit Svensson in Baghdad

The contrast could not be any more stark. While the terrorist group Islamic State (IS) is using horrific martial videos to attract fighters from all over the world to the Middle East, the Arab Gulf states are rallying support for the battle against the jihadis with pictures of their pilots. On the one hand, disguised, exclusively male holy warriors; on the other, high-tech soldiers, their faces open to the world.

Saudi Arabia is sending a prince into combat, the United Arab Emirates an attractive woman pictured smiling in the cockpit making a 'thumbs up' sign. She is referred to as "Lady Liberty", not just a nod to the liberation of the region from the murderous IS regime, but also to the status of women, which is being propelled back into the Stone Age under the jihadis. A full head and face veil, black gloves and long coats are prescribed in the IS-controlled caliphate. Anyone contravening the rules is shot dead or, as happened in Mosul, stoned.

"Lady Liberty", the prince and the other Arab pilots on the promotional photos are part of the alliance against IS and are supporting the United States in their air attacks in Syria. Until the last minute, it was not certain whether Qatar, Saudi Arabia, Bahrain, the United Arab Emirates and Jordan would actually take part in a jointly co-ordinated campaign against the terror militia.

US Secretary of State John Kerry worked tirelessly for many days to recruit as many nations as possible for the alliance. The Europeans were highly receptive to his requests. France has been taking part since early September, contributing fighter bombers to the battle against IS in Iraq; the UK has been flying air strikes in Iraq too since late September. Seven Western nations (including Germany) are supplying weapons, primarily to the Kurds. 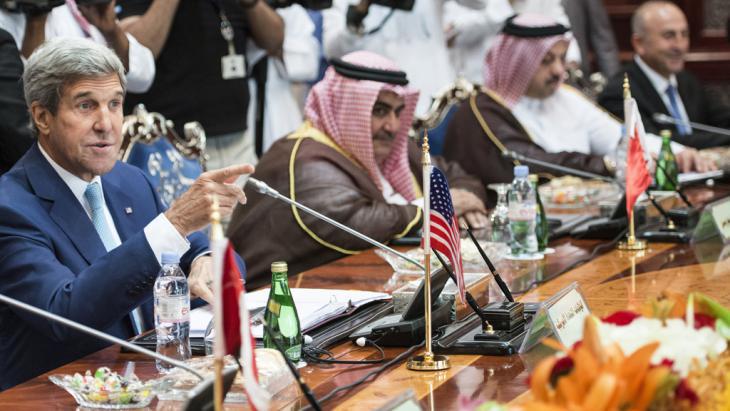 A united front against the jihadis of IS: US Secretary of State John Kerry is pictured here urging the members of the Gulf Cooperation Council to join the military campaign against Islamic State (IS) in Syria at its session in Jeddah on 11 September 2014

But the most important thing is that the Arabs are on board. Without them, it is doubtful whether the campaign against IS would be a success. Now a spokesman for the Syrian foreign ministry in Damascus has even confirmed that Washington gave the Syrian UN envoy advance warning of the air strikes and that Damascus is willing to co-operate. It couldn't have gone better for Kerry. Nevertheless, any co-operation with Bashar al-Assad is categorically rejected by all those involved at the present time.

The battle against the terrorist group on Syrian territory marks a crucial turning point in the conflict hot spot that is the Middle East. The "Islamist monsters", as British Prime Minister David Cameron calls IS fighters, are cornered – and not just militarily. The expansion of operations to Syria now means that there are no longer any "safe havens" for IS. It is vulnerable to attack anywhere.

Although the terrorist organisation's leadership is doing its utmost to make provisions and bring its most important equipment out of harm's way, the bombardment of their de facto capital, Raqqa, by allied planes is making military co-ordination difficult for the group.

But what is likely to have greater impact is the political and psychological aspect of the international alliance. The fact that Muslim Arab states are also turning on IS carries more weight than a campaign by the West, which is already detested by many Muslims. If they acted alone, the Americans and their Western allies would simply provoke yet more hatred, which has at any rate continued to grow since the last Iraq war of 2003. Since then, East versus West has been the motto. IS and other extremist Islamist groups have been banging on that particular drum ever since. This is now obsolete as a grounds for IS's legitimacy.

But the broad alliance against the terrorist group is not only bringing East and West closer together; it is also uniting the Arab states. This is the most remarkable aspect of this development. The revolutions in several countries had split the former partners. For example, Qatar participated in the military operations against Gaddafi in Libya and poured a great deal of money into supporting the Muslim Brotherhood in Egypt, which displeased Saudi Arabia. Riyadh also took a dim view of the reception of Hamas leader Khaled Mashal in Doha. 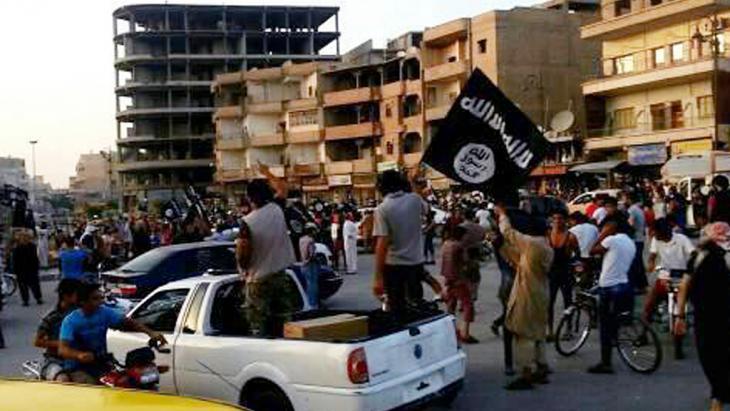 Although the jihadis of IS now face opposition from the Arab states, there are doubts as to whether the anti-IS alliance will last: "While the German foreign policy strategy is completely in line with that of the Americans, doubts are being expressed, namely that Saudi Arabia and Qatar could well pull out once IS's appetite for expansion has been sated to some degree," writes Birgit Svensson

Qatar goes its own way

Qatar has made a huge effort to muscle its way onto the international stage. The emir's independent decision to push to the fore had diplomatic consequences: the other Gulf States withdrew their ambassadors from Doha. Syria was the only place they were all still working together. Wealthy sheikhs from Saudi Arabia, Qatar and Kuwait gave the rebels cash to buy weapons for the fight against Assad.

IS took advantage of this "start-up funding", breaking away from the rebel front and henceforth pursuing its own goals. We now know what that meant: its own state, a caliphate, was established.

One can now rightly accuse the Gulf States of acting as an accelerant in this context. They now fear a conflagration, one that no longer remains restricted to Iraq and Syria, but that could even spill over into their countries. This has essentially motivated them to join forces with the Americans on a military intervention. As of now, the common enemy is no longer Israel, but IS.

However, no one knows how long this will remain the case. Washington is only too aware of the fickleness of its Arab allies. In Berlin too, the sustainability of the Arab involvement is also being discussed.

While the German foreign policy strategy is completely in line with that of the Americans, doubts are being expressed, namely that Saudi Arabia and Qatar could well pull out once IS's appetite for expansion has been sated to some degree.

While the Gulf States believe the black-clad jihadists have gone too far, they too practise a strictly fundamentalist-oriented Islam. Public executions are still a routine occurrence in Saudi Arabia. The Wahhabism in force there corresponds in many respects to the practices of the Salafists, from whose ranks the members of IS emerged.

This makes it all the more astonishing that the Gulf States' publicity campaign promoting the war against IS suggests an openness that bares little resemblance to everyday life in their own societies. While "Lady Liberty" pilots fighter bombers against the jihadis, she would not even be allowed to drive a car in Saudi Arabia.

Nouara may be 65, but she is ready to join thousands of others who burn their ID and pay traffickers for the chance of a new life in Europe. Zineb Bettayeb reports END_OF_DOCUMENT_TOKEN_TO_BE_REPLACED

Antoine Leiris lost his wife in the Islamist terrorist attack on the Bataclan club in Paris. German director Kilian Riedhof has made a film of his book "You will not have my hate ... END_OF_DOCUMENT_TOKEN_TO_BE_REPLACED

Following the recent brutal attack on Salman Rushdie, famous writers have been reading passages from his works. Torsten Landsberg takes a look at the struggle in 1988 to publish " ... END_OF_DOCUMENT_TOKEN_TO_BE_REPLACED

Much has changed in the European post-fascist firmament since former SS officers, veterans of the collaborationist Vichy government and other dubious figures established the ... END_OF_DOCUMENT_TOKEN_TO_BE_REPLACED

END_OF_DOCUMENT_TOKEN_TO_BE_REPLACED
Social media
and networks
Subscribe to our
newsletter