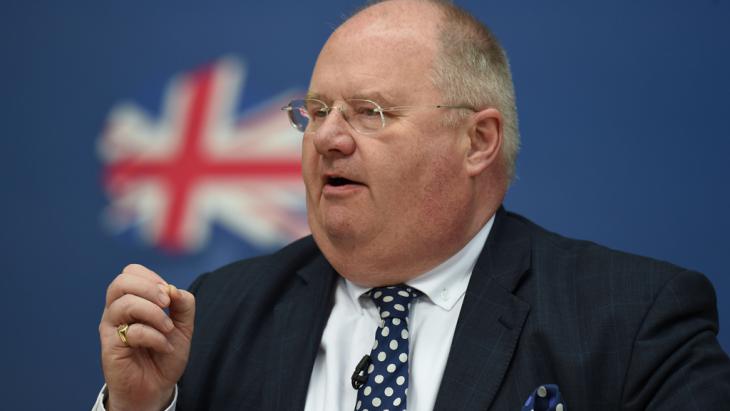 Minister's letter to British Muslim leaders
A deficit of trust

In mid-January, the British Communities Secretary Eric Pickles sent a letter to 1,000 Muslim leaders in Britain, asking them to "explain and demonstrate how faith in Islam can be part of British identity". The reaction was swift, with many Muslims expressing anger or dismay at what they saw as the insinuation that Islam is not part of Britain. By Susannah Tarbush

A letter from Communities Secretary Eric Pickles and Lord Ahmad of Wimbledon to 1,000 mosques in Britain calling on them to challenge extremism and demonstrate how "faith in Islam can be part of British identity" has caused a storm of controversy.

Critics of the letter include the deputy secretary-general of the Muslim Council of Britain (MCB) Harun Khan who asked: "Is Mr Pickles seriously suggesting, as do members of the far right, that Muslims and Islam are inherently apart from British society?"

Several days into the furore, the highest-ranking Conservative Muslim politician Lady Sayeeda Warsi publicly blamed the negative reactions to the letter on a long-standing failure of the coalition government to engage with a broad spectrum of Muslims. Lady Warsi, a former co-chairman of the Conservative Party, resigned her positions as Foreign Office minister and communities and faith minister last August in protest at the government's "morally indefensible" Gaza policy.

Writing in the Sunday newspaper "The Observer" on 25 January 2015, she said the letter contained "some profoundly positive and inclusive sentiments". The problem was its timing, and "that when the government stretched out its hand in friendship there was no response from the other side." She added: "A letter out of the blue to a mosque that is potentially affiliated to an organisation like the MCB – with whom the government has refused to engage – creates a climate where even the most benign of correspondence can become toxic." 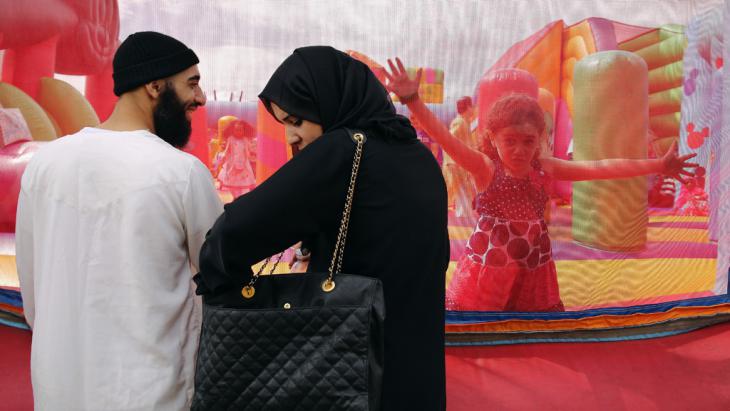 A family watch their children on a bouncy castle during an Eid celebration in Burgess Park, London. Harun Khan, deputy secretary-general of the Muslim Council of Britain, asked: "Is Mr Pickles seriously suggesting, as do members of the far right, that Muslims and Islam are inherently apart from British society?"

The letter was a response to the killing by Islamist terrorists of 17 people in the "Charlie Hebdo" and Jewish supermarket attacks in Paris "We are proud of the reaction of British communities to this attack," it said. "Muslims from across the country have spoken out to say: not in our name."

But there is more work to do, the letter said. "We must show our young people, who may be targeted, that extremists have nothing to offer them." The letter asserted that "British values are Muslim values" and that "there is a need to lay out more clearly than ever before what being a British Muslim means today: proud of your faith and proud of your country."

Pickles and Lord Ahmad offered reassurance to mosques in the face of rising Islamophobic attacks, and condemned far-right anti-Muslim groups: "The vitriol espoused by the thugs of the English Defence League and Britain First is just as much an affront to British values as the teachings of preachers of hate."

The letter was sent at a time when the government, police and security services repeatedly warn that a major terror attack in the UK is "almost inevitable".

The terror threat level was raised to "severe" last August because of the rise of Islamic State. At least 600 British men and women jihadis have gone to Iraq and Syria; roughly half of them have returned. Through the Internet, social media and videos, some Britons in Islamic State are urging others to join them or to carry out terror attacks in the UK. 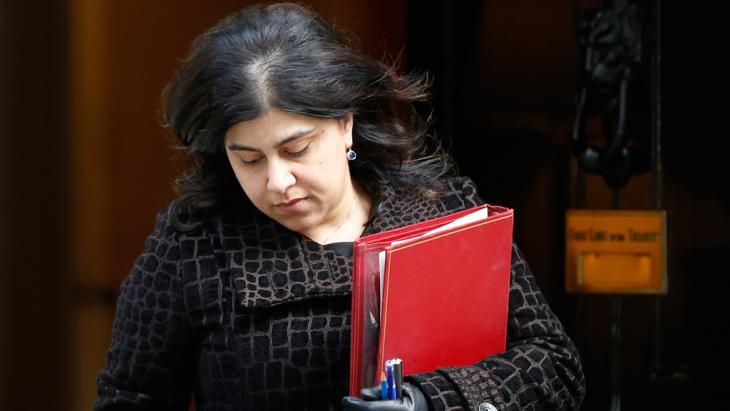 Toxic letter? Lady Sayeeda Warsi, who resigned as a minister in August 2014 in protest at the government's "morally indefensible" Gaza policy, said that the adverse reaction to the letter was rooted in the fact that the government has not engaged with a wide range of Muslims. She said: "While I welcome Eric's attempt to reach out, the reality is that if you haven't cultivated a friendship, if you haven't fostered trust, then the chances of success are limited"

Radicalisation on the Internet rather than in mosques

It appears that such extremists are increasingly unlikely to have been radicalised by mosques. Former Chief Rabbi Jonathan Sacks said the letter suggested that the Muslim community within Britain can contain its own radicals. But in truth, "Islamism, like all modern global political movements, is actually a global phenomenon transmitted by the Internet, transmitted by social media, and so I would not be surprised if the Muslim community didn't say 'you're asking of us something that is not actually under our control'."

The spokesman of East London Mosque, Salman Farsi, said the Pickles letter would cause resentment. "The problem here lies with the individuals that this letter is talking about, especially the extremists. These are individuals who are not coming to our public Muslim institutions. They are being radicalised on the Internet and elsewhere."

In a letter to Pickles and Lord Ahmad, the MCB's secretary-general Dr Shuja Shafi agreed that British values are Islamic values. But "we take issue with the insinuation that extremism takes place at mosques, and that Muslims have not done enough to challenge the terrorism that took place in our name."

The MCB rejected any notion that Muslims and Islam are inherently apart from British society, and also suggestions that "Muslims must go out of their way to prove their loyalty to this country of ours."

Prime Minister David Cameron strongly defended the letter. "Anyone, frankly, reading this letter, who has a problem with it, I think really has a problem. I think it is the most reasonable, sensible, moderate letter that Eric could possibly have written." 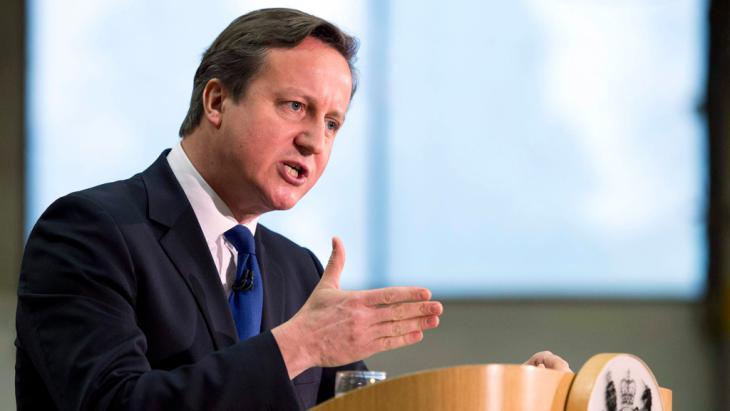 British Prime Minister David Cameron expressed his public support for the letter and the minister who wrote it, saying that it was "reasonable, sensible and moderate" and that Mr Pickles had been "absolutely right" to write the letter urging leaders to do more to tackle extremism.

Engaging with a wide range of Muslim groups

The decision of the coalition government not to engage with certain Muslim groups is linked with the "Prevent" strategy initiated by the then Labour government in 2007 with the aim of preventing violent extremism. The Conservative Home Secretary Theresa May launched a revised "Prevent" strategy in 2011, and sidelined the MCB, an umbrella organisation of over 500 mosques, schools and charities.

Warsi considers this shunning of the MCB to be wrong. In her "Observer" article she writes: "I do not believe government should disengage from large sections of any community." Unlike some of her former government colleagues, she never saw the MCB as extreme or dangerous. But she sees it as having some faults, and often discussed with the MCB her view that it "continues to produce a leadership that is neither equipped to represent, nor is genuinely reflective of, the contemporary aspirations of large sections of British Muslim communities."

Warsi wrote that the government's approach over the past four years has been "to view ever-increasing numbers of Muslim organisations or individual activists with suspicion and dangerously narrow engagement to a dozen people from a community of more than three million."

Warsi adds: "In January 2011, I warned that anti-Muslim sentiment had 'passed the dinner-table test' and become socially acceptable. Since then we've seen rising levels of anti-Muslim hate crime and increasingly vitriolic Islamophobic language. Yet not a single major government speech has reflected the concerns, worries and, yes, fear within the British Muslim community. So it's no surprise there is a trust deficit, a questioning of motive to a letter sent with the best of intentions. For too many, the hand of friendship felt like an admonitory finger that was once again pointing at Britain's Muslims."

Home
Print
Newsletter
More on this topic
Letter sent to 1,000 Muslim leaders in BritainThe Trojan Horse scandal in the UK: Islamists in the classroom?Review of the Muslim Brotherhood in the UK: Has Cameron buckled to pressure from Middle East allies?British fatwa against IS: Breaking the spell of a poisonous ideology
Related Topics
Charlie Hebdo, Islam and democracy, Islam in Europe, Islamism | Political Islam
All Topics

It is possible to write about the Holocaust and the crimes of colonial powers without downplaying anything. In her latest book, Charlotte Wiedemann focuses on the numerous blind ... END_OF_DOCUMENT_TOKEN_TO_BE_REPLACED

The highly controversial Indian blockbuster "The Kashmir Files“, on the exodus of Kashmiri Hindus in the 1990s, is characterised by unilateral representations, negative ... END_OF_DOCUMENT_TOKEN_TO_BE_REPLACED 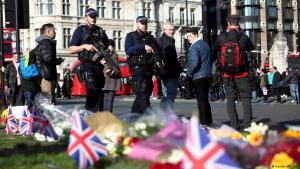 "The Suspect" by criminology lecturer Rizwaan Sabir is the harrowing account of the author's own experiences at the hands of the UK's counterintelligence agencies. At the same ... END_OF_DOCUMENT_TOKEN_TO_BE_REPLACED

"Finding Home", the second album by Syrian-born, UK-based musician Maya Youssef, works through feelings of loss and destruction until its music reaches a place beyond war and ... END_OF_DOCUMENT_TOKEN_TO_BE_REPLACED

Written by the controversial Kuwaiti Shia preacher, Yasser Habib, the film's plot pursues two threads: one from the Islamic past, the other from the present. The narratives meet ... END_OF_DOCUMENT_TOKEN_TO_BE_REPLACED
Author:
Susannah Tarbush
Date:
Mail:
Send via mail

END_OF_DOCUMENT_TOKEN_TO_BE_REPLACED
Social media
and networks
Subscribe to our
newsletter