While the Turkish government tries to improve the rights of the country's minorities, in the South-Eastern Anatolian region of Tur Abdin there are still conflicts of interest between the Turkish state on the one side, and Armenians, Arameans and Kurds on the other. Harald Brandt explains the background to the problems 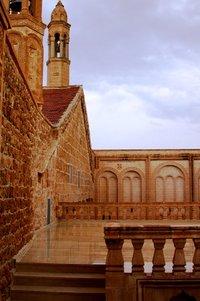 The Mor Gabriel monastery: The return of the Christians, who moved back into the houses they'd left and claimed back their land, led to massive conflict with their Kurdish neighbours

​​ "It is hard to understand the politics of the government party, the AKP," says Jacob Gabriel of the cultural association of the Syrian Orthodox Christians in Midyat. "On the one hand, it strengthens the rights of the minorities, while on the other hand, I sometimes have the impression that good economic relations with the Kurds in Northern Iraq are more important than the interests of the people in their own country."

Jacob Gabriel speaks fluent German with a strong Swiss accent. He left South-East Anatolia for economic reasons when he was seventeen, founded a family in Switzerland and worked very hard. He's now 45, and he's returned with his wife to the Tur Abdin region in south-eastern Turkey, renovated the old family home and opened a jeweller's shop in Midyat.

In October 2009 he was still a deputy for the pro-Kurdish DTP (Party of the Democratic Society), but when the party was disbanded by the constitutional court in December 2009 on the grounds that it was too close to the banned Kurdish Workers' Party (PKK), he lost his seat.

"The people here in the south-east don't want to fight any more," he says. "But as long as there's no security, they are not prepared to just lay down their weapons. During thirty years of war, they've learnt to be mistrustful and cautious. The Kurds have drawn their consequences; they've organised themselves, and the other minorities in Turkey know that their future is bound up with the fate of the Kurds."

When, in July 2009, the Turkish interior minister Beşir Atalay presented his "Kurdish initiative" offering greater cultural rights to minorities, the reaction of the Kurds, as well as that of the smaller minority of the Syrian Orthodox Christians, was largely positive.

Kurdish village names were allowed once more; bilingual town signs were seen for the first time in Turkish history, the university in the provincial capital Mardin started a faculty of living languages, including Persian, Arabic, Aramaic – and Kurdish. In February 2010, 14 television and radio stations received licences to broadcast unlimited programmes in Kurdish. 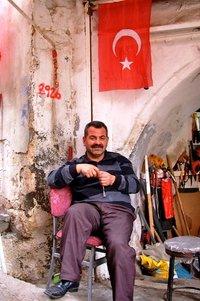 Scissors grinder in the souk of Mardin in the Tur Abdin region: Tur Abdin is of great importance to Syriac Orthodox Christians, for whom the region used to be a monastic and cultural heartland

​​ But as early as October 2009, six weeks before the ban on the DTP which led to violent demonstrations across the country, Jacob Gabriel was not convinced that the reform elements in the governing AKP would continue to hold the upper hand.
"Although the AKP is a religious party, it is the best party we've had at the head of the Turkish Republic," he says. "The progress which the AKP has achieved is more than any party has achieved in eighty years. Although they are religious, they are also democratic and they want to move Turkey in the direction of democracy and peace. But the military always opposes them, and steers in the other direction."

But mass migration to Western Europe began in the second half of the twentieth century, as economic and political pressure increased, including a ban on the use of the Aramean mother-tongue, Turovo. Now, 1,500 to 2,000 Syrian Orthodox Christians live near the border to Syria, with a further 10,000 in Istanbul and between 120,000 and 150,000 in the rest of Europe.

The Mor Gabriel monastery, founded in 397 A.D. and located nearly 30 kilometres south-east of Midyat, is seen as the spiritual centre of Syrian Orthodox Christianity in Turkey. Some 70 monks, nuns and students live under the leadership of Archbishop Timotheos Samuel Aktas in historic buildings which were renovated some years ago with money donated by members of the community who had returned to the region.

The return of the Christians, who moved back into the houses they'd left and claimed back their land, led to massive conflict with their Kurdish neighbours, who wanted to be able to continue to pasture their cattle on monastery grounds.

In August 2010, the Supreme Court ruled in favour of villages near the monastery, overturning a ruling by the regional court in Midyat, which had confirmed the boundaries of the monastery as defined by the state. 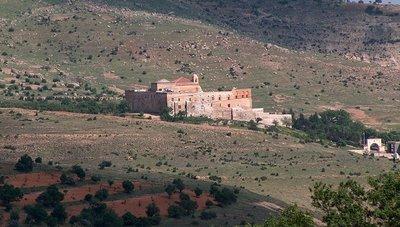 Turkey's ancient Christian heritage: The Deyr ul-Zafaran near Mardin was founded in 493 AD. The monastery was formerly the seat of the patriarch of the Syriac Orthodox Church from 1160 until 1932

​​The secretary of the bishop, John Gültan, explains how it came to the dispute: "The current problems stem from the fact that the land ownership was not registered – at least not in this region, in south-eastern Turkey. And a lot of mistakes were made when the process was started – in private property, in the borders between villages and of course with regard to church or monastery property."

A foundation was set up in 1936, recognised by the Turkish constitution, representing the monastery; and there are documents from 1936 which register the property of the monastery.

"And still we have problems," says Gültan, "because some people say that the monastery doesn't need so much land. That's nonsense, of course. The monastery is a legal foundation, and it's not a matter of whether we need the land or not. It's a matter of property rights that we have had for 1,600 years. That's one of the points of conflict between the Christian minority here and the government."

The Supreme Court accuses the foundation of having built the walls of the monastery on state forest land. The case will be heard again on November 3rd.

John Gültan expresses himself carefully when he talks to us, but Daniyel Demir, national chairman of the Federation of Arameans in Germany, doesn't mince his words: "In these cases it's about much more than the property rights of the monastery," he says in a press statement. "If the court requires the wall to be demolished, it wouldn't just be the existence of the monastery which would be at risk, it would be the future of the Aramean Christians in Turkey."

Apology for the massacre of the Armenians

The issue of property rights does not only affect the Syrian Orthodox Christians in south-eastern Turkey; it also affects the far larger minority of Christian Armenians, who were almost wiped out in 1915/1916. 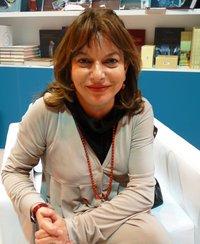 Coming to terms with the past: The journalist Mine Kirikkanat is one of the signatories of a manifesto drawn up in 2008, in which 200 Turkish intellectuals apologised for the massacre of Armenians during the First World War

​​ Turkey fears that recognition of the genocide, in which it is estimated 1.5 million people died, could lead to demands for reparations from the Armenian side. A large part of the land in South-East Anatolia belonged to Armenian farmers or land-owners. Representatives of the Armenian diaspora are demanding compensation for that, as well as the release of money from Ottoman banks which have gone into Turkish ownership.

Mine Kirikkanat, a columnist on the Vatan newspaper, sees her country at a turning point. She's one of the signatories of a manifesto drawn up in 2008, in which 200 Turkish intellectuals apologised for the massacre of Armenians during the First World War. The action has made her many enemies in Turkey. But it's also brought her much respect in the civil society.

"It's not just the Syrian Orthodox Christians," she points out. "The Greeks also hope to be able to reopen their school for priests on the Prince Islands. There's the issue of the recognition of the ecumenical character of the Greek Patriarchate in Fener in Istanbul; there are the Armenians as well. They all know that their situation will only get better when the situation of the Kurds changes."

Kirikkanat says it's quite consistent for Christian Turks like Jacob Gabriel to be active in the pro-Kurdish DTP, or in its successor, the Party for Peace and Democracy (BDP), but she believes they should not put all their money on the Kurdish option.

"In the Lausanne Treaty, which defined the current borders of the republic in 1923, and which is thus the founding document of modern Turkey," she explains, "the Kurds are not seen as a minority, because they fought with the Turks against the European invaders. It was Mustafa Ismet Inönü, successor to Atatürk and himself a Kurd, who signed the treaty." And she continues, "Today the Kurds want the status of a minority, but they didn't have it in the beginning, and they will never get it, because they are also founders of this republic."

Armenian Religious Service in Turkey
Breaking a Taboo in Akdamar
After almost 100 years, thousands of Armenians have flocked to the southern Anatolian city of Van to attend a religious service in the Church of the Holy Cross. The event marks a turning point in how Turkey treats its Christian minorities. A report by Susanne Güsten

Turkey's Aramaean Minority
More Than Just Mor Gabriel
Driven out by economic hardship and discrimination at local and state level in the 1960s and by forced evacuations in the 1990s, Southeastern Turkey's Aramaeans are starting to return home, only to find that their ancestral lands no longer belong to them. Ayse Karabat reports

Religious Conflict in Turkey
A Cold Wind Sweeping the Tur Abdin
In south-eastern Turkey a neighbourhood dispute over a few hectares of stony ground has escalated into a religious war between the Mor Gabriel Monastery and the surrounding Arab and Kurdish villages. Susannne Güsten has the details

END_OF_DOCUMENT_TOKEN_TO_BE_REPLACED
Social media
and networks
Subscribe to our
newsletter