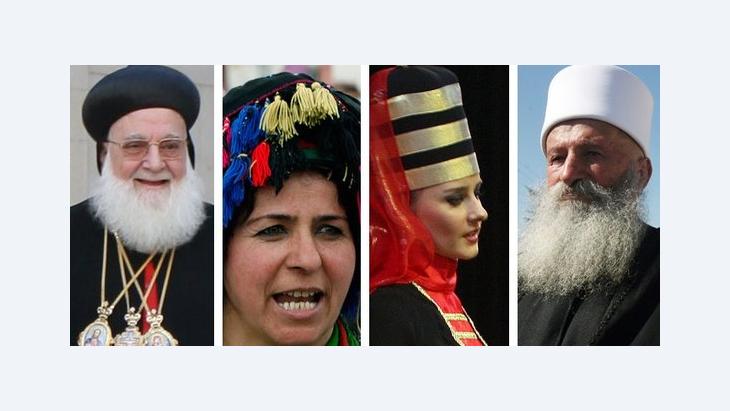 ﻿Syria's minority groups, until now artificially divided, have united against the Assad regime. If wisely managed, this provisional union could lead to a lasting alliance. Kersten Knipp reports

Syria is a diverse country. Located on the border between the Arab and Turkish cultures, the country has seen many different population groups settle there over the millennia. Most have been followers of Islam, a diverse religion that unites them, but at the same time, also divides them. About three-quarters of Syrians are Sunni Muslims, while about one tenth, including the ruling Assad family, belong to the Shiite Alawites.

And then there are the religions linked to Islam, which include Druze, Ismailism, Alevi and Twelver Shiitism, which together make up about 7 percent.

Along with the Muslims, there are also the Christians. They, too, are a mixed group: Greek, Roman Catholic and Syrian Orthodox branches, Maronites, Melkites, Armenian Apostolics and members of the Chaldean Catholic Church. They make up about 15 percent of the roughly 21 million Syrians.

Aside from religious differences, there are also the ethnic minorities: Kurds, Turkmen, Circassians and Armenians, among others. In addition, the last few decades have seen roughly 600,000 Palestinian and Iraqi refugees enter the country.

Despite its many different communities, Syria is not a melting pot in which the different groups mix to form a new national culture. But at the same time it's not a boiler threatening to explode with ethnic and cultural pressure. 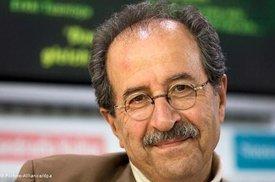 Syrian-born writer Rafik Shami says that in the era before Hafiz al-Assad, confessional identity was irrelevant in daily life

​​For a long time, says Syrian-born writer Rafik Shami, the various minority groups didn't have significant problems with each other or the Sunni majority. Shami, a Christian who has lived in Germany for 40 years, recalls being unaware that a childhood friend was Muslim for years. "It was not necessary," said Shami, "because we played together. We didn't need to know anything else."

More was not necessary because the lines that separated Syrians at the time were neither religious nor cultural. The population was divided primarily on the basis of geographical and sociographic factors: rural versus urban population, mountain inhabitants versus those who lived in the desert or on the coast, nomads versus those with a sedentary lifestyle.

Some Syrians chose to live an open, metropolitan lifestyle, while other preferred to keep to themselves. The individual regions and cities were home to the wealthy and poor, educated and uneducated classes.

All groups had their centres. The Alawites were especially drawn to the mountain regions, as well as Homs and Hama. The Ismailis traditionally lived in the mountains along the coast, while Greek Orthodox and Greek Catholic Christians preferred Damascus, Latakia and the adjacent coastal areas. The Kurds were predominantly located in the Taurus Mountains and along the Syrian-Turkish border, and in Hay al-Akrad, the so-called Kurdish neighbourhood in Damascus.

Modern Syria was established in the wake of European colonialism. Under Ottoman rule, the greater region of Bilad al-Sham comprised the territories of present-day Israel, Lebanon, Syria and the Palestinian territories. Britain and France divided the region into provinces in 1918, from which emerged the states of today. 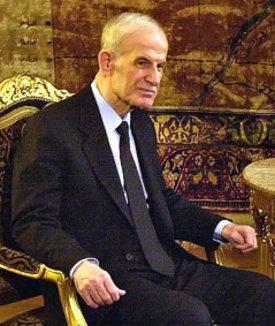 Rafik Schami: "Hafiz al-Assad distributed favours and jobs to people who were loyal to him and who were members of his own group, the Alawites. In this way he created a confessional regime, previously unknown to the Syrians"

​​This reorganization also led to a cultural and, especially, a religious divide among the previously peacefully coexisting populations. For its local army, the Troupes Speciales du Levant, France recruited mostly members of religious minorities, deliberately relying on a tactic that set the minorities against the majority Sunni population.

This tactic, playing individual population groups against each other, was carried over by President Hafiz al-Assad after his coup in 1970, and continued by his son, today's President Bashar al-Assad.

"Assad distributed favours and jobs to people who were loyal to him and who were members of his own group, the Alawites," said Shami. "In this way he created a confessional regime, previously unknown to the Syrians."

At the same time, however, the Assad family also bound members of other communities to itself, not least the Sunni business elite. The privileges given to this group led many of them to place themselves on the side of the Assad regime, once the riots against the president began last year.

"Many Sunnis got rich at the expense of the rest of the population," said Shami. "This is why they stand by Assad. And they will only break their connection to him once that link is no longer beneficial for them."

United by their opposition to Assad

But because so many Syrians have only known the authoritarian side of the Assad regime, the resistance against the government of Bashar al-Assad has been formed from members of all population groups, according to said Ferhad Ahma, a member of the Syrian National Council.

"Regardless of their ethnic or religious affiliation, most Syrians want democratic change," said Ahma. This, however, does not mean that after the long years of religious and ethnic differences, they have overcome their mistrust of each other and especially of the Sunni majority. 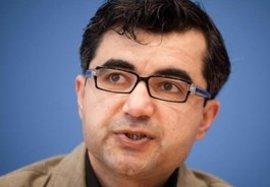 "Regardless of their ethnic or religious affiliation, most Syrians want democratic change," says Ferhad Ahma, member of the Syrian National Council

​​"The minorities insist their rights will be clearly defined in the future Syria," said Ahma. "In this respect they are quite rightly concerned, because they see that in some neighbouring countries, like Iraq and Turkey, the treatment of the smaller minority groups is anything but optimal."

Admittedly, many Alawites have also been afraid, says Shami, since not all of them support the Assad regime. Therefore, he says, they should not all be collectively accused or even pushed to openly distance themselves from the government.

"The Alawites are careful. This must be respected," said Shami. "Then they talk openly, and prove whether they are a supporter of the regime or not. But we should not constantly pull them in front of microphones and ask them to give a statement against Assad, especially those who live abroad. These Alawites have relatives still living in Syria, hostages of the regime."

A constitution for all population groups

For this reason, Syrians from every population group have been involved in the resistance against Assad, says the SNC's Ahma. Of course, there are also concerns for the future. But the Syrian opposition has made a good start toward solving these problems.

"Negotiations with minority representatives are now taking place, in order to create clear concepts and theories and to anchor the role of minorities and their rights in the constitution – and not only in ordinary legislation – so that they have a guarantee for the future," said Ahma.

The Assad regime significantly contributed to the artificial fracturing of the Syrian population. Now, through their common opposition to the regime, these groups are once again coming together. Right now they are provisional allies – a wise policy could ensure they remain allies in the long run.

Home
Print
Newsletter
More on this topic
The Syrian Uprising: Assad Will Fall, But What Will Follow?Syria's Minorities and the Uprising against the Regime: In Assad's FortressFerhad Ahma of the Syrian National Council: ''People Are Demonstrating All over the Country''
Related Topics
Arab Spring, Arabellion, Christians in the Islamic world, Democracy and civil society, Iraq War, Minorities in the Muslim world
All Topics

The neo-Ottomanism propagated by Erdogan has long been more than rhetoric and symbolic politics. This can be seen from recent developments in parts of northern Syria, where Turkey ... END_OF_DOCUMENT_TOKEN_TO_BE_REPLACED

Surging coronavirus cases in many parts of the world have overshadowed the start of this year's Muslim holy month of Ramadan, with festivities once again curtailed by contagion ... END_OF_DOCUMENT_TOKEN_TO_BE_REPLACED

Researchers agree that climate change alone cannot be blamed for the outbreak of war in Syria in 2011. However, neither can it be ignored as a reason this once blossoming country ... END_OF_DOCUMENT_TOKEN_TO_BE_REPLACED

Syrian-born Rafik Schami is a gifted storyteller and one of the most successful authors writing in German today. In his 50 years in exile in Germany, he has introduced the Arab ... END_OF_DOCUMENT_TOKEN_TO_BE_REPLACED

The Syrian war has moved through many phases and included a number of changing actors. But one aspect has remained constant throughout: the Assad regime is using the conflict to ... END_OF_DOCUMENT_TOKEN_TO_BE_REPLACED

The UN Office for the Coordination of Humanitarian Affairs has compiled moving documents of contemporary history with a collection of images by Syrian photographers who have ... END_OF_DOCUMENT_TOKEN_TO_BE_REPLACED

Comments for this article: United against Assad

I don't know where your editor gets his/her information from, but any decent observer of the Syrian situation sees that great parts of the population, SPECIALLY the minorities are on Assad's side.
Please tell me when did you here a high-ranking Christian priest or dignitary or even a Druze one or any other stating any statement against Assad??

You might be able to sell these lies for German population far from the location and almost ignorant of what happens in the world, maybe try publishing this in the Bild, but not for us.

END_OF_DOCUMENT_TOKEN_TO_BE_REPLACED
Social media
and networks
Subscribe to our
newsletter