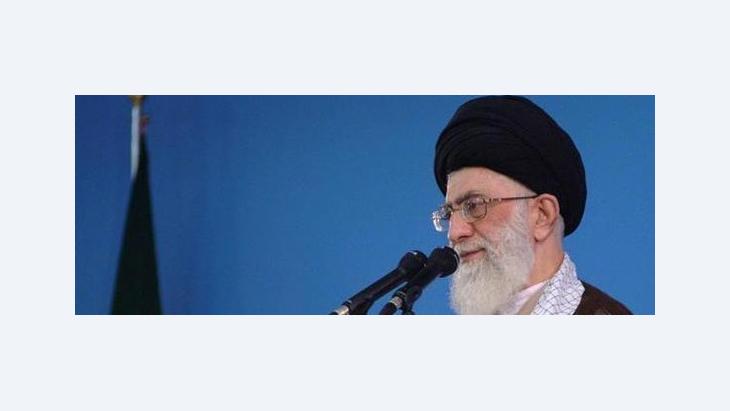 Minorities in the Islamic Republic
Fear of Separatists

﻿In the multi-ethnic nation that is Iran, religious and ethnic minorities suffer discrimination at the hands of the regime. In his essay, Faraj Sarkohi describes the tense relationship between representatives of minorities and the Shia-dominated state

Viewed from a historical perspective, Iran has been a multi-ethnic nation with a huge variety of languages since the time of the Achaemenid Empire (550-330 BC). For most of the intervening period, Persian has been the official language. This was even the case at the court of the Turkish-speaking rulers who governed Iran for some 800 years.

This even resulted in the formation of two independent governments in two provinces in 1945: the People's Republic of Kurdistan Mahabad and the Autonomous Republic of Azerbaijan, both of which were dismantled within a year.

The spiritual leaders who assumed political offices in the Islamic Republic regarded "Iranian nationalism" as un-Islamic and replaced the idea with the religious concept of the "Islamic umma", the community of all believers.

Symbol of a short-lived period of political self-determination: the Republic of Mahabad was declared in the city of Mahabad in January 1946, but was dismantled a short time later

​​However, they were forced to allow a revival of "Iranian nationalism" when Iran came under attack from Iraq. Over the past two decades they have further fuelled Iranian nationalism to garner public support for their nuclear programme. By continually emphasising the concept of an "Islamic Iran", they are attempting to rob this nationalism of its ethnic complexion.

The ideology of the Islamic Republic is built upon two contradictory concepts: that of the "people" (mellat) and that of the "umma". The non-religious concept of the "people" is rooted in the collective Iranian memory by nationalism and racist claims of superiority and associated with the notion of "Aryan origin".

The religious concept of "umma" is based on the dissolution of differences of ethnicity, origin and language and regards all Muslims as citizens of an Islamic state. The nation dissolves into the united "umma".

The concept of the Islamic "umma" is, in the definition of the spiritual rulers of Iran, restricted to Shia Muslims, who form the majority there and increasingly discriminate against other religious communities, such as the Sunnis, who are in the minority in Iran. 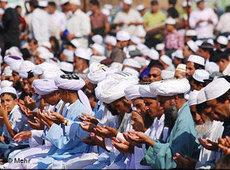 Excluded from major posts of religious and political importance in Iran: the rights of Sunni Muslims have been seriously curtailed over the past 30 years

​​Constitutionally, this discrimination is evident in the Iranian basic law which defines Twelver Shia as the "irrevocable state religion". Moreover, all bills passed by parliament must be in accordance with the Shia interpretation of Sharia law, and only Shias can become the country's religious leader and president.

The Constitution goes on to state that: "Zarathustrian, Jewish and Christian Iranians are recognised as the only religious minorities free to practise their religious rituals in respect of the law and behave in accordance with their religious regulations in matters concerning inheritance and family, and in religious instruction."

In contrast, the rights of Sunni minorities have been curtailed by state authorities over the past 30 years. In December 2010, for example, the government attempted to exert greater control over Sunni universities in Sistan and Balochistan under the pretext of stemming the influence of the Wahabis, the terror network al-Qaeda and the terrorist group Jundullah.

This move triggered angry protests in parliament by Sunni spiritual leaders and Sunni deputies representing Sistan and Balochistan. The Jundullah group – which sees itself as defender of the "rights of the Sunni Baloch people" and which has been responsible for several bombings, suicide bombings, abductions, executions and attacks on border posts – carried out a bomb attack on a Shia funeral ceremony in Muharram on 15 December 2010 in response to government actions. Thirty-eight people were killed in the attack and 60 others injured.

The constitution officially recognises Zoroastrianism, Judaism and Christianity and affords these religions rights, such as the right to delegate a parliamentary representative. There are, however, no representatives of these religions in the military, intelligence service, educational institutions or the legal system. They are also excluded from key positions in politics and administration. 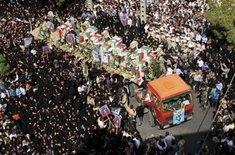 Funeral procession for the victims of a terrorist attack carried out by the Jundullah group: Jundullah has claimed responsibility for most of the increasing number of attacks in the province of Sistan and Balochistan in recent years

​​Article 15 of the Constitution states: "The common written and spoken language of the Iranian people is Persian. Official documents, correspondence and texts as well as textbooks must be written in this language. Use of native languages and dialects is, however, allowed in addition to the Persian language in the press and other media, as is instruction using relevant literature in schools."

In the Islamic Republic, linguistic minorities are allowed to set up their own publishing houses and to publish books in their native tongue. Part of the state radio and television programme is broadcast in minority languages. As far as the state authorities are concerned, there is no ethnic and linguistic discrimination. Although a promise to allow ethnic and linguistic minorities to carry out mother-tongue tuition in schools has been made, it has not in fact been honoured to date.

National investment in the economy and social sector does not flow to all provinces and regions in equal measure. Nevertheless, these differing levels of development are not attributable to ethnic discrimination, but are caused by other factors. 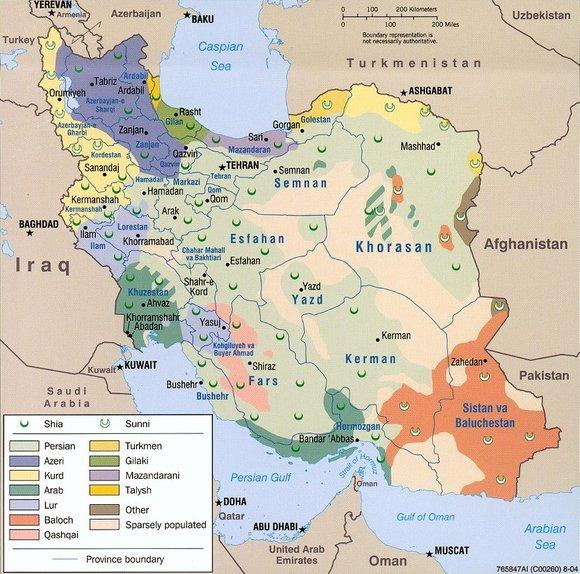 ​​While three regions that are primarily inhabited by Azeris are among the country's most highly developed, the province of Balochistan in the south-east of the country, which is populated by Balochs, is the least developed.

The Iranian government accuses Jundullah, which announced its existence in Balochistan in 2003, of working together with the US, Israel and al-Qaeda, of perpetrating acts of terrorism and of supporting separatism. Jundullah plans its terrorist acts against Iran from military camps in Pakistan.

The group's Islamic fundamentalist convictions set it apart from other movements within Iran's ethnic and linguistic minorities. Most other parties and associations are secular and advocate democracy.

In the shadow of Iranian nationalism

It is primarily Arabic-speaking groups in Iran that are vulnerable to vilification by proponents of Iranian nationalism. Reminders of the Arab invasion of the seventh century – which brought an end to the Sassanid dynasty, the tribal structures of Arabic populations in Iran and their adherence to the Sunni branch of Islam – as well as the links between individual Arab groups and Saudi Arabia and al-Qaeda all serve to bolster this racist interaction.

Arabic-speaking groups are also in the minority in Khuzestan and have no vehicle through which to express their ethnic demands and endeavours.

The Islamic Republic blames the US and Israel for supporting separatist movements within ethnic minority groups in Iran. In the hope of achieving a regime change, the government of George W. Bush focused on providing political and military support to opposition movements among ethnic minorities. And even though this policy has in the meantime failed, the US continues to attach importance to embroiling the Islamic Republic in ethnic tensions.

Despite the spectacular military actions of the PJAK and Jundullah, these will not resonate with the public. Most Iranians do not support the terrorist attacks and reject the financial support of ethnic groups by the US and Israel. They fear that conditions akin to civil war will lead to the disintegration of the nation.

Iran has always been a nation with great ethnic and linguistic diversity. In the past, cultural commonalities and limitations on linguistic discrimination prevented any major belligerent conflict between the various ethnic groups.

Independence and the abolition of ethnic and religious discrimination are not possible without democracy. The religious despotism that rules Iran has united the ethnic and non-ethnic opposition in a battle against repression and in favour of democratisation, and allowed the call for a secular, federalist, parliamentary government to become a common wish.

Faraj Sarkohi founded the arts magazine Adineh (Friday) in 1985, and served as its editor-in-chief for 11 years. He was arrested in 1996 as one of the spokesmen of the writers' initiative ("Declaration of 134 Iranian writers") against censorship. A year later, he was sentenced to death at a secret trial. The judgement was however later revised following international protests. Two years later, he left Iran for Frankfurt, where he now lives. In 1998, Sarkuhi received the Kurt Tucholsky Prize for politically persecuted writers, and is honorary member of the PEN Centre in Germany.

Home
Print
Newsletter
More on this topic
Afghan Refugees in Iran: The Lowest of the LowZoroastrians in Iran: In DeclineExhibition: "The Story of Iran and the Jews" - Light and Shadows
Related Topics
Ayatollah Ali Khamenei, Iran's Green movement, Iranian clerics, Iranian opposition, Minorities in the Muslim world
All Topics

Iranian author Fariba Vafi is adept at describing everyday scenes and concealing within them something ambiguous, in parts strange and grotesque. She writes novels – which have ... END_OF_DOCUMENT_TOKEN_TO_BE_REPLACED

In her latest exhibition in Japan, Farzaneh Khademian depicts figures who seem detached from their surroundings. In interview with Qantara.de, the Iranian photographer and painter ... END_OF_DOCUMENT_TOKEN_TO_BE_REPLACED

The catastrophic human rights situation in Bahrain is being largely ignored by the rest of the world. Despite all the damning evidence, which includes a Human Rights Watch report ... END_OF_DOCUMENT_TOKEN_TO_BE_REPLACED

Talks to salvage the 2015 Iranian nuclear deal have entered their eighth round in Vienna. Even if a deal is struck and some of the sanctions are lifted, the state of the Iranian ... END_OF_DOCUMENT_TOKEN_TO_BE_REPLACED

Every year in December, the team at Qantara.de takes a look back at the articles that proved most popular with our readers. This year is no different. Here is a run-down of the ... END_OF_DOCUMENT_TOKEN_TO_BE_REPLACED

END_OF_DOCUMENT_TOKEN_TO_BE_REPLACED
Social media
and networks
Subscribe to our
newsletter