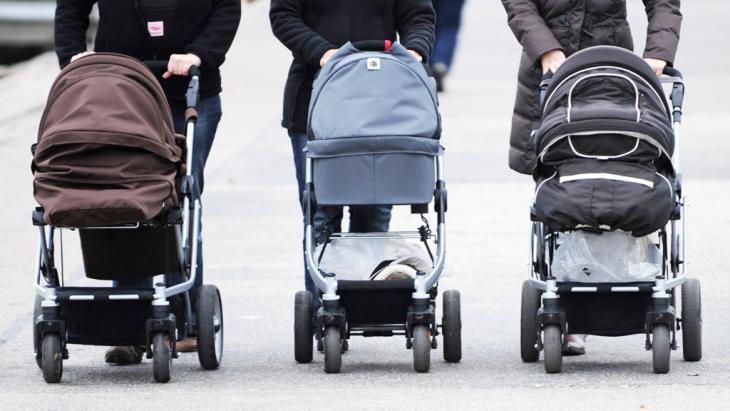 For many people Islam and misogyny are apparently inseparable. And for some, growing numbers of refugees are pushing up levels of concern over both. But if immigrants and their children are thinking in patriarchal family structures, this has less to do with their religion or culture and far more to do with German immigration policy. An essay by Susanne Kaiser

No handshake from the imam, no respect for women in uniform, instead cheeky remarks from macho school students. German women – politicians, police officers, teachers – are given a rough time of it by Islam. This is at least what we are led to believe if we follow the latest bout of Islam bashing prevalent in some publications. In view of rising refugee numbers, there are those who feel called upon to give public expression to their concurrently growing worries concerning Islamisation or their annoyance at misogynistic Muslims.

One of them has written a book, allowing the world to share in her experiences gathered as a policewoman on the beat, dealing with "criminal individuals with a migrant background, first and foremost young men from Muslim countries". "Deutschland im Blaulicht – Notruf einer Polizistin" (Germany′s siren society – one policewoman's appeal) is the title of the book containing the pent-up prejudices of an officer from Bochum (Tania Kambouri, 32). When she is snubbed by an imam who refuses to shake her hand, the knee-jerk reaction is one of political consequences. "This is why the burka and the niqab must be banned," demands CDU politician Julia Klöckner in the latest edition of Cicero, speaking from the security of Rhineland-Palatinate political opposition. A ban aimed at women, to educate the imam?

Who are the women really angry with?

For both the politician and the policewoman on patrol, it is clear that "patriarchal power and the desire to oppress" have their roots in "the archaic communities" of "Muslim migrants", as Kambouri's book claims. In the 1990s, you could have simply written "foreigners". 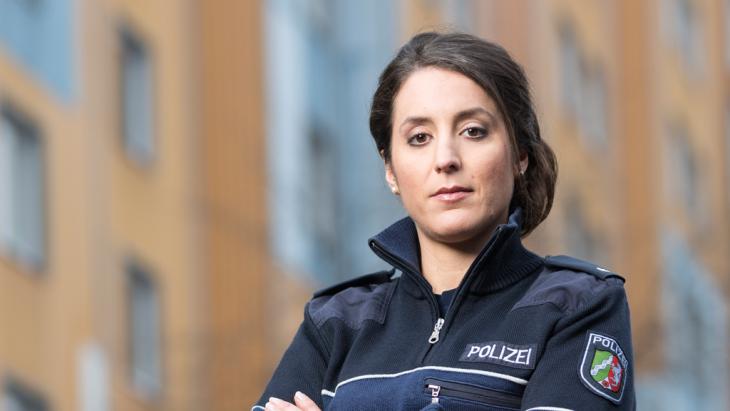 "Deutschland im Blaulicht – Notruf einer Polizistin" (Germany′s siren society – one policewoman's appeal) is the title of the book containing the pent-up prejudices of an officer from Bochum (Tania Kambouri, 32)

"Whether orthodox or liberal, practising or not – one of the biggest integration problems of Muslim migrants is evidenced through the role of the woman" (Deutschland im Blaulicht, Chapter 1). These days, because they actually identify more with mainstream society, people from the political right are trying to express their views in more politically correct fashion.

But where does this rage come from and is it directed at the right people, or the right thing? Or in other words, can a religion such as Islam and a social group such as Muslims be reduced to a world view that collectively brands them as misogynist and casts them as the other, in contrast to an open, emancipated and tolerant "German society"? Apparently so, but to do this you have to block out historical and social factors and maintain an absolute focus on your own naive and simple logic.

For instance, the fact that over a long period of time, Germany has only seen the migration of distinct groups of people. As far as religion was concerned, these immigrants were quite heterogeneous, but not with regard to their social background and the circumstances in which they came to Germany. If you take a look at the recent history of migration, the situation becomes extremely obvious: since the 1960s, German immigration policy has itself been based on a highly conservative social model! The recruitment of "guest" workers, for example, was basically aimed at male farm labourers who were subsequently allowed to bring over their wives and children to join them.

These workers mostly came from rural regions and not from cosmopolitan, progressive large cities where the avant-garde would have been the norm. In any case, such employees would have been much more expensive and overqualified. Although not much thought may have been given to it at the time, from the contemporary perspective, however, the question needs to be asked whether the traditional family model of migrant workers and their descendants is perhaps more associated with this constellation – and therefore not only applicable to Muslims or Turks, but also to Italians and Christians from the era.

The social background – city or country, uneducated or educated – actually plays a much greater role in the question of patriarchal values. And if you only look at the educated social classes, the picture is actually turned on its head: in Turkey there is a significantly greater number of female university professors than in Germany.

When men do men's work

To recruit women for heavy and dirty assembly line and piecework in industry – that was inconceivable in Germany. And it is still the case today, as the example of women from the former Soviet Union shows. Because of the labour shortage resulting from the turmoil of war in the 20th century, as well as for ideological reasons, women in the USSR worked in jobs traditionally deemed to be male professions: as builders of roads, railways and trains, in heavy industry, engineering and as bus and tractor drivers. Following the collapse of the Soviet Union and its economic system, many of them came to Germany in search of work. And what were they told once they got here?

That in Germany, their jobs were traditionally only done by men and that for that reason no women were being employed. Then perhaps some professional re-training and a different job? That option is only made available to one parent, to the "family breadwinner". In Germany this was still the man even in the late 1990s. The study "Russian-Germans in the Federal Republic of Germany" (2014) by Petra Ferdinand-Sorb sheds some light on how women were thus forced to become housewives and full-time mothers. 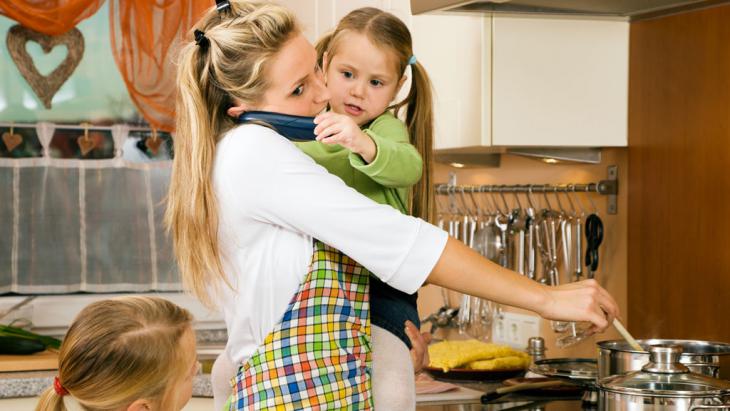 "If immigrant men are today accused of representing a traditionally patriarchal, "archaic" family model, criticism which in some cases is certainly not unfounded, should we not at the same time be asking ourselves whether such structures were not forcibly imposed by German labour market policy?" questions Kaiser

So if Russian-German men are today accused of representing a traditionally patriarchal, "archaic" family model, criticism which in some cases is certainly not unfounded, should we not at the same time be asking ourselves whether such structures were not forcibly imposed by German labour market policy? There is little public discourse on the subject of Russian-German machos. Is this because they don't fit the cultural and religious stereotype and therefore don't fit into the Islam debate?

Conservatives, feminists, activists all use Islam in their arguments

Women are not oppressed "by Islam", but first and foremost by men. Or by other women. "Islam" per se does not exist in any case. Whenever the debate grinds to a homogenised halt, there is always a counter-movement aimed at differentiation. Indeed, those described in blanket terms as Muslim have the most wide-ranging histories, backgrounds and religious attitudes: they or their forebears come from Turkey, Bosnia, Albania, Kosovo, Iran, Morocco, Afghanistan, Lebanon, Pakistan, Syria or Germany, as Sunnis, Alevis, Shias, Alawites, followers of the Ahmadiyya movement, Sufis, Ishmailites, followers of Zaidism and Ibadis, from the extremely devout to the extremely secular.

They reflect the diversity with which culture and religion is lived and practised in Germany – and of course do not therefore all represent the same gender role model. This is actually quite banal. Nor, by contrast, can Islam be held responsible for the behaviour of misogynistic building site workers or CEOs, verifiably German in their 20th generation and with no obvious religious affiliation.

The debate would benefit from a rather more differentiated image of Islam, of migrants and not least of Germans and their "basic values". After all, when women start to put up a fight against men by demanding bans affecting other women, something has gone strangely awry. The CDU woman's pamphlet does not explain how a burka ban might encourage the imam to shake her hand the next time she visits. That of all people, a woman from the conservative ranks – such as the former German Wine Queen Klöckner – feels the need to commit herself to the emancipation of female Muslims, is also somewhat thought-provoking.

Doesn't the CDU itself peddle a rather archaic role model, as evinced by the "Herdprämie" (or "stove bonus" – a benefit paid to parents as an incentive to remain at home)? Or should we be talking about "conservative values", just because of the Christian context?

Perhaps the imam himself uses Islam to explain his own behaviour. But Islamic feminists do the same. Or political activists, such as Farid Esack for example, the former campaigner against apartheid. The Islamic theologian from South Africa said recently at a lecture in Berlin, "Perhaps there are as many Islams as there are Muslims".

Home
Print
Newsletter
More on this topic
Study on attitudes in "Post-migrant Germany" : Do you love Germany?Interview with the sociologist of religion Detlef Pollack: "Germans are much less tolerant"Immigration and the new class divide: Feeding on people's grievancesThe perception of Islam as the enemy: When fear creeps in
Related Topics
Christianity, Democracy and civil society, Human rights, Islam in Germany, Muslim women
All Topics

Giessen, Eichsfeld, Kusel, Berlin – cars bearing old German number plates are the latest trend on the streets of Cairo. Many Egyptians regard the discarded plates as chic. What ... END_OF_DOCUMENT_TOKEN_TO_BE_REPLACED

Tunisia has been going through a severe economic and political crisis in recent years. More than one in three young people there are unemployed. For many skilled, qualified and ... END_OF_DOCUMENT_TOKEN_TO_BE_REPLACED

German imams have publicly expressed their solidarity with the women of Afghanistan. In a letter of protest, the clerics say that the Taliban regime's decree barring women from ... END_OF_DOCUMENT_TOKEN_TO_BE_REPLACED

At the end of every year, the team at Qantara.de gives you a run-down of the ten most-read articles on the site over the past 12 months. Here is a quick overview of the stories ... END_OF_DOCUMENT_TOKEN_TO_BE_REPLACED

Social engagement is often motivated by religious factors. A new book explores the background to these community efforts and appraises how effective they are in helping to ... END_OF_DOCUMENT_TOKEN_TO_BE_REPLACED

The government in the Netherlands, one of the last European nations to abolish slavery, has made an historic apology. But some feel that there is still a long way to go. By Ella ... END_OF_DOCUMENT_TOKEN_TO_BE_REPLACED
Author:
Susanne Kaiser
Date:
Mail:
Send via mail

END_OF_DOCUMENT_TOKEN_TO_BE_REPLACED
Social media
and networks
Subscribe to our
newsletter