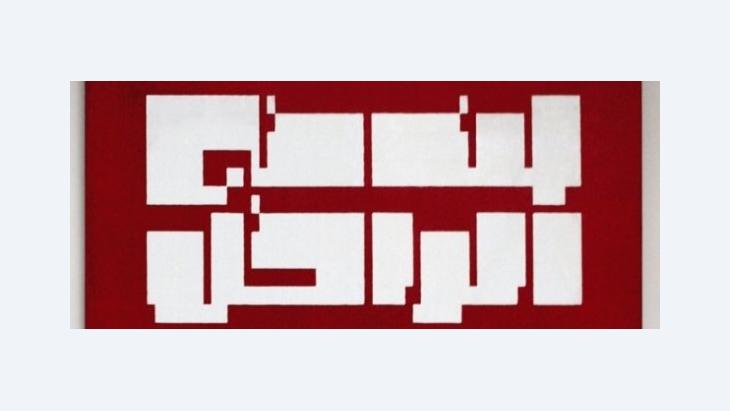 ﻿Arabic artists push the boundaries of graffiti with their calligraphic styles and political messages. A new book published in Germany looks at what makes Arabic street art unique – and just how powerful it can be. Cinnamon Nippard reports

Graffiti can be more than just a can of spray paint: It played a small part in the revolutionary change that swept the Arab world earlier this year. The uprising in Syria was incited by the arrest in early March of a group of children, aged 8 to 15, who had been caught spraying anti-government graffiti on the wall of their schoolhouse.

The children were released on March 20, reportedly showing signs of torture, and people took to the streets against the regime. Since then, human rights groups say that more than 1,000 people have been killed and 10,000 arrested.

Graffiti in the Arab world isn't something that is talked about much, but a new book released by Berlin-based publisher From Here to Fame aims to change that. Written by German graffiti writer and publisher, Don Karl, and Lebanese typographer, Pascal Zoghbi, the book profiles a number of important artists and introduces the Arabic alphabet and calligraphic styles to non-Arab readers.

"Be with the revolution" 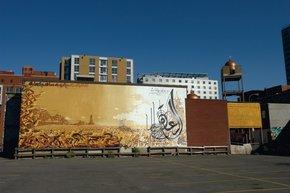 ​​Tagging a name or pseudonym is the basis of graffiti in the Western world. While there are also taggers in Arab regions, according to Lebanese typographer Pascal Zoghbi, graffiti assumes a more urgent role as a means of voicing dissent. In this way, Arabic graffiti often takes the form of political slogans like "Be with the revolution," which spread from country to country during the recent uprisings.

Zoghbi remarked that it's the easiest, fastest and virtually only way for a person living in an undemocratic state to express their opinion openly. "They cannot try it in a newspaper because of the censorship. Their blogs will be shutdown or the Internet will be closed," he said. "The government is really in control of everything they do, so it's the only way they can show their own voices."

Even though graffiti has been on the rise since the so-called Arab Spring, with political slogans appearing on the streets and even on tanks, if people are caught, the punishment in Arab authoritarian nations are usually a lot harsher than in the West.

The price of expression

In Syria, the security army removed the fingernails of teenagers who sprayed anti-government graffiti, while in Libya some of the protestors who took their message to the street with spray cans paid a much higher price. 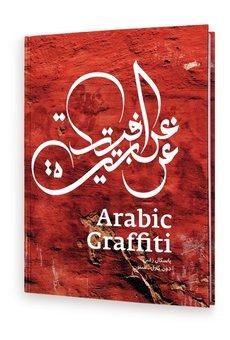 ​​"When they drew the resistance flag kicking out Gaddafi, they were shot by the security forces," said Zoghbi.

Lebanon is one of few countries where graffiti is not illegal. Zoghbi said that as long as graffiti doesn't target a certain politician, or political party, it was ok. "But once you touch one of these big politicians or leaders, you might be in trouble," he added. "Not from the policemen, but from mafias there."

In terms of style, Lebanese artists are heavily influenced by New York graffiti from the 1980's, while Zoghbi said that in other countries artists are more inspired by the natural flow of the Arabic script itself.

In Palestine, on the other hand, street art takes many forms, from political statements, to murals or stencils of martyrs.

The controversial barrier that Israel erected in the West Bank is a central theme used by Palestinian and internationally renowned artists like Banksy, Blu and Swoon to criticize Israeli policy. Many locals, however, are opposed to artistic representations of the wall because they think this makes it beautiful and therefore acceptable.

Art with a message

One of the most influential artists profiled in the book "Arabic Graffiti" is French-born Tunisian eL Seed, who now lives in Canada. eL Seed has a very strong, clear calligraphic style, based in traditional Arabic scripts, but with a fresh, urban feel. He no longer tags his name on walls or signs his murals, but instead has adopted a proverbial tradition where the message takes precedence. His large-scale pieces embody proverbs such as "Respect our elders," "Inspiration," (top picture) and "I need my history." 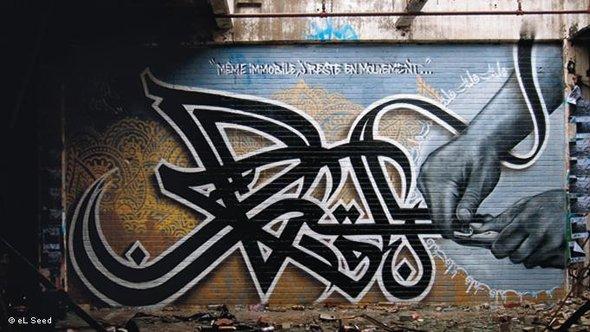 ​​"He really modernizes [the art form] or makes it urban so it appeals to the young graffiti writers in Beirut for example," Don Karl said of eL Seed. "Everybody knows him and likes his work."

Artists like eL Seed tap into ancient traditions with their work. Like many alphabets around the world, Arabic can be traced back to 1300 BC to the Phoenicians who first developed phonetic characters. The Arabic alphabet itself originated around 500 BC. From the set of symbols, other calligraphic styles like Thuluth, Naskh, Farsi and Diwani developed.

The book includes a brief description of these different calligraphic styles, including the oldest and most refined Arabic script, Kufic, which branched off in two directions. The smoother, curvilinear style was used in North Africa and Spain, while the Square Kufic style was used in the East. 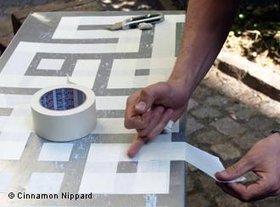 ​​L'Atlas is a Paris-based artist who caught the graffiti bug in the 80s and 90s, but looked further than the Latin alphabet he grew up with. Obsessed with letters, he began to study Chinese and Arabic calligraphy by himself. After meeting Arabic calligraphic masters, l'Atlas studied in Morocco, Egypt and Syria, and developed a passion for the Square Kufic script.

L'Atlas developed a new kind of alphabet, melding Latin letters into the geometric Kufic forms in an attempt to explore new visual possibilities and to bridge the gap between East and West.

After being caught by police while doing graffiti in 2001, l'Atlas decided to start expressing his ideas legally by using gaffa tape on the ground. He began to create compasses in a cryptogram style, directly outside the subway exits in Paris in white gaffa tape, hoping to encourage people to question their personal direction in life. 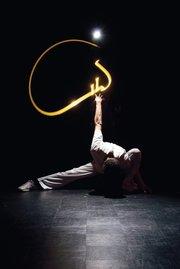 ​​"My way was just an example to ask to people like the compass: 'Where are you going? What are you doing?'," explains l'Atlas.

The compass is also a representation of himself as an artist, who came from the underground and had to negotiate the city and the art world. Within just a couple of years, everyone in Paris had heard of l'Atlas and his quest to bridge continents, eras, and art forms.

There are clear similarities between Western and Arabic graffiti; in both genres, the letters are extended and intertwined. Zoghbi insists, however, that Arabic graffiti has a different feel to it.

"It's more dancing than being structured together. It's more a musical script," he says.

A lot is happening in Syria’s Sweida Governorate – foreign intervention there is unprecedented both in terms of scale and number of actors – yet Damascus remains the dominant ... END_OF_DOCUMENT_TOKEN_TO_BE_REPLACED

When she ascended the throne, millions of Muslims still lived under British rule. Later, Elizabeth II appealed for tolerance in a multi-religious society. She was the first ... END_OF_DOCUMENT_TOKEN_TO_BE_REPLACED

The documentary "The Other Side of the River" shows how women in the Kurdish regions of northern Syria fight for their rights under the most difficult conditions. By Aviva ... END_OF_DOCUMENT_TOKEN_TO_BE_REPLACED

Following months spent considering a military incursion into northern Syria, Turkey now appears to want talks with Syria to ensure security and the return of refugees. From ... END_OF_DOCUMENT_TOKEN_TO_BE_REPLACED

In this essay, renowned Lebanese journalist and writer Hazem Saghieh asks whether the Arab Levant, which stretches from Iraq in the east to Egypt in the west, will remain an ... END_OF_DOCUMENT_TOKEN_TO_BE_REPLACED
Author:
Cinnamon Nippard
Date:
Mail:
Send via mail

END_OF_DOCUMENT_TOKEN_TO_BE_REPLACED
Social media
and networks
Subscribe to our
newsletter