Mohammed el-Baradei in Egypt
Figurehead of the Liberal Opposition

The former Director General of the International Atomic Energy Agency, Mohammed el-Baradei, received an enthusiastic welcome from opposition supporters on his return to Cairo. However, it remains to be seen whether or not he will put himself forward as a candidate at the forthcoming presidential elections. Amira El Ahl assesses the situation 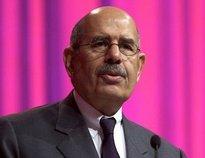 Figurehead of the liberal opposition: Mohamad Baradei. But it remains to be seen whether or not he will put himself forward as a candidate for the 2011 presidential elections

​​Last Friday, 19 February, we were witness to a rare media spectacle as Egypt's main opposition newspapers, "Al-Dustour", "Al Shorouk" and "Al-Masry Al-Youm" vied with one another in their coverage of the same story.

Pictures of Mohammed el-Baradei, former boss of the International Atomic Energy Agency, were splashed over all the front pages when he paid a visit to his home country last weekend. A "hero's welcome" had been planned for the airport claimed the newspapers as each tried to outdo the others in their praise of the diplomat.

The various opposition movements, including "Kifaya," and the Facebook groups "6 April" and "El-Baradei for Presidency of Egypt 2011" had already begun campaigning for el-Baradei on the Internet and were urging that the 67-year-old be greeted with a triumphal reception.

In order to outfox the security police, the groups' organisers had advised their supporters via Facebook to travel to the airport in groups of no more than three – the maximum number of people permitted to gather as a group in public under Egypt's 30-year-old emergency laws. 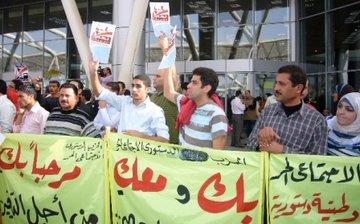 ​​In spite of warnings that the airport would be sealed off by 6,000 police officers and that any unauthorised assemblies would be immediately dispersed, a group of around 1000 people nevertheless gathered at Terminal 3 last Friday afternoon to welcome el-Baradei as he landed in Cairo from Vienna.

Young people, university professors, intellectuals and activists, gathered both inside and outside the terminal waving placards and banners reading: "Yes to el-Baradei as President," chanting slogans such as, "We will follow Baradei wherever he goes" and singing the Egyptian national anthem over and over again.

Within a very short time, Mohammed el-Baradei has become the great focus of hope of the opposition movement in Egypt. It follows his appearance on CNN at the end of last year when he did not rule out the possibility of his standing as a candidate for the 2011 presidential elections. Though he added that any such move would be conditional on their being free and fair elections monitored by international observers.

Amongst the supporters who waited for Baradei at the airport there were also many well-known Egyptians, such as the writer Alaa al-Aswani and the actor and UNICEF Ambassador Khaled Abol Naga, both of whom have now joined the 60,000 strong membership of the Facebook group "El-Baradei for Presidency of Egypt 2011."

"El-Baradei is able to articulate in a professional and intelligent way what the ordinary people feel. He has the ability to mobilise people. He is someone everyone trusts. That is very rare," says Abol Naga by way of explanation for the prevailing excitement. 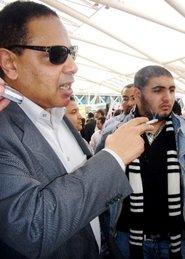 Among the supporters waiting for Baradei at the airport were many well-known Egyptians, including the writer Alaa al-Aswani, best known for his novels "The Yacoubian Building" and "Chicago."

​​For many young Egyptians el-Baradei has become a symbol of the long-awaited change in the country. After decades of living abroad, the Nobel Prize winner is determined to finally make the move back to his homeland.

It is his long absence from the Egyptian political scene, and his distance from the regime and the numerous corruption scandals with which it is struggling, that for many people makes el-Baradei the most appealing of the potential candidates for the 2011 presidential elections.

On top of this comes the fact that, thanks to his having held the sensitive position of former head of the International Atomic Energy Agency, he enjoys a high reputation abroad and it would be difficult for the Mubarak regime to place too many obstacles in his way should he actually decide to run.

The legal hurdles, however, are likely to be too high even for el-Baradei to overcome. Although the constitution was amended in 2005 to allow for a multi-candidate presidential election, critics argue that under the new rules only the governing NDP party candidate has a chance to become president and that the constitutional amendment is intended as a tool to clear the way for Mubarak's youngest son Gamal to take up the position.

No to Mubarak's hereditary republic

The changes have rendered it practically impossible for either an independent candidate or one from a smaller party to enter the race. A fact that had not escaped the attention of those at the airport as they loudly protested against any move towards a hereditary republic.

Apart from those organs of the press loyal to the government, which either ignored el-Baradei's arrival entirely or criticised him as someone whose long absence from the country has put him out of touch the real problems of the Egyptians, there are also independent critical voices expressing the belief that the euphoria surrounding el-Baradei is more than a little excessive.

Sandmonkey, a liberal Egyptian blogger, writes in Twitter: "What we are seeing is another proof that we are a nation of followers who are always looking for someone to follow and never take a stand ourselves. They don't believe that one of them, an ordinary citizen, can lead them. We must have a master. Anyone famous and internationally recognised immediately becomes a presidential candidate."

Whether el-Baradei in fact wants to take on the great responsibility, that already appears to be weighing heavily on his shoulders, and present himself as a candidate, is not at all clear.

In any case, there was to be no meeting with his supporters at the airport. By 6pm, when his plane finally arrived three hours late in Cairo, the mass of demonstrators had become so large that the security officials decided to keep the 67-year-old in the terminal. Later they managed to slip out unnoticed through a side entrance.

Whether it was fear of the crowd or of his new role as bearer of the hopes of Egyptian youth and the opposition movement that was on el-Baradei's mind is not clear.

Succession to Mubarak's Throne
Is Egypt Becoming a "Family Republic"?
Egypt's president Hosni Mubarak's is almost thirty years in office, the country is suffering from democratic deficits. Therefore, in order to initiate change, Europe must demand a relaxation of the restrictive election regulations, writes Stephan Roll

State of Emergency Extended in Egypt
Autocrat in Dire Straits
During his election campaign, President Mubarak had pledged to revoke the state of emergency and replace it with anti-terrorism legislation. Instead, it has now been extended for the second time. Information from Jürgen Stryjak in Cairo

END_OF_DOCUMENT_TOKEN_TO_BE_REPLACED
Social media
and networks
Subscribe to our
newsletter