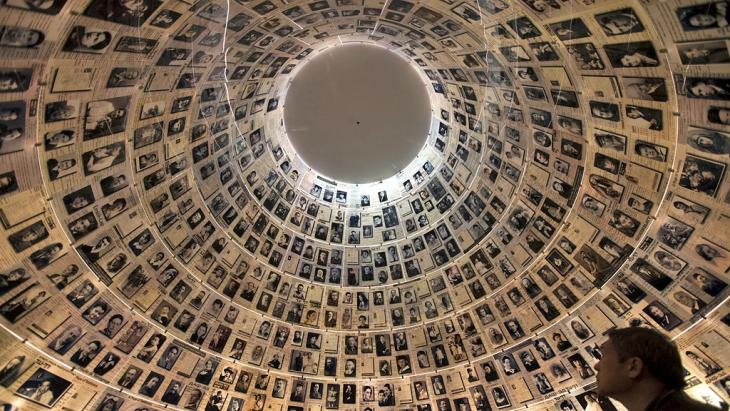 Israel's Yad Vashem Holocaust memorial institute for the first time granted an award to an Egyptian for rescuing a Jewish family during World War II in Berlin. Igal Avidan spoke to Irena Steinfeldt, director of the Department for the Righteous Among the Nations in Yad Vashem

Mohamed Helmy was an Egyptian doctor who lived in Berlin and hid several Jews during the Holocaust. Last month, he was honoured by Israel's Yad Vashem Holocaust memorial as "Righteous Among the Nations" – the highest honor given to a non-Jew for risking great personal dangers to rescue Jews from the Nazis' gas chambers.

Helmy was born in 1901 in Khartoum, in what was then Egypt and is now Sudan, to an Egyptian father and a German mother. He came to Berlin in 1922 to study medicine and worked as a urologist until 1938, when Germany banned him from the public health system because he was not considered Aryan, said Martina Voigt, the German historian, who conducted research on Helmy.

When the Nazis began deporting Jews, he hid 21-year-old Anna Boros, a family friend, at a cabin on the outskirts of the city, and provided her relatives with medical care. After Boros' relatives admitted to Nazi interrogators that he was hiding her, he arranged for her to hide at an acquaintance's house before authorities could inspect the cabin, according to Yad Vashem. The four family members survived the war and immigrated to the U.S. Letters expressing their gratitude to their rescuer were uncovered in the Berlin archives, and were recently submitted to Yad Vashem.

After the war, Helmy picked up his work as a physician again and married Emmi. The couple had been unable to marry during the Nazi era because of the race laws in place. Helmy himself stayed in West Berlin where he worked as a doctor until his death in 1982. 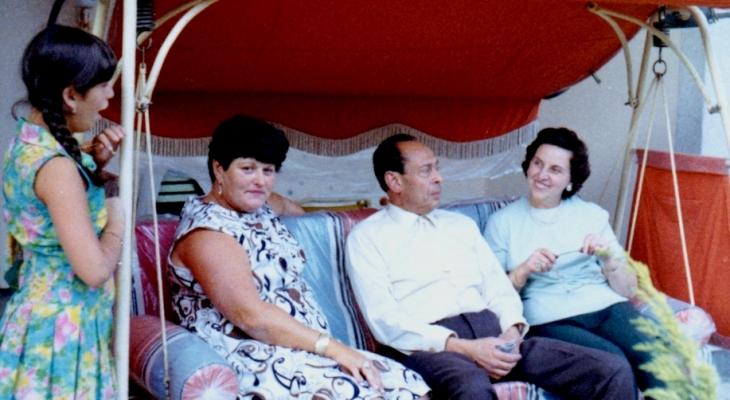 "A man with a strong character, a moral person who would not be intimidated." Mohamed Helmy and his wife Emmi Helmy (right) in Berlin during a visit of Anna Boros (second from left) and her daughter Carla in 1969

How did the recognition of Helmy through Yad Vashem come about?

Irena Steinfeldt: We have received Helmy's documents from Karsten Mülder who had researched the history of Jewish Shoah victims in Germany. Among the documents was also a report about Anna Boros' rescue through Helmy and Frieda Szturmann. After we examined this information, we brought it before the "righteous committee", which then decided to bestow upon Helmy the title "Righteous Among the nations".

What was Helmy's status as an Egyptian in Germany after Hitler's rise to power in 1933?

Irena Steinfeldt: His situation was difficult because according to the racist Nazi ideology he was considered a so-called "Hamit" and thus inferior to the "Aryan" race. Therefore, he was not allowed to marry his German fiancé. He had had to wait until the end of the war.

Helmy has expressed criticism about the Nazis and was therefore jailed and interned in a camp for Egyptians near Nuremberg. Egypt was at that time an English territory and England was an enemy of Germany. Although Helmy this caused several problems for Helmy, he nevertheless had the courage to speak up against the Nazis.

How did it come about that Anna Boros, who was 16 then and lived together with her mother and step-father, was looking for a hiding place from the Nazis?

Irena Steinfeldt: Anna Boros originated from Romania and had come to Berlin at the age of two with her mother. Anna's grandparents had already lived in Berlin where her mother eventually married a Berliner. When in the spring of 1942 Boros was about to be deported, she decided to go into hiding.

How did Boros and Helmy meet? 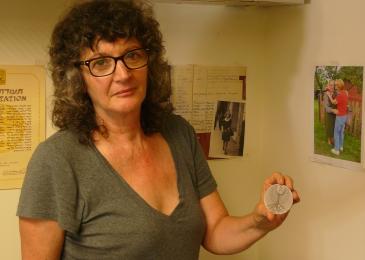 "Whoever saves one life has saved an entire world." - Irena Steinfeldt with the medal for Mohamed Helmy

Irena Steinfeldt: All of the Boros family were patients at Helmy's practice, including Anna Boros. We only know that Helmy was hiding her in his garden house in Berlin-Buch, and whenever things got dicey, he would bring her to Frieda Szturmann for a few weeks until things calmed down. Dr. Helmy also provided medical care to Anna's grandmother and her uncle who were in danger of getting caught. Although it was especially dangerous for someone in his situation, he nevertheless stood to his patients.

Unfortunately, very little is known about Mohamed Helmy – his wife passed away and he no children. But according to the documents – what kind of a person do you imagine him to have been? Is he the typical "righteous under the nations"?

Irena Steinfeldt: Helmy was surely a man with a strong character, a moral person who would not be intimidated.

We have to deal with disagreeable saviours of Jews every now and then, but all of them had done things in the decisive moment which the "nice", "friendly" neighbour had failed to do. The 25,000 recognized saviours have nothing in common with one another. They belong to all religions, and some are atheists. They are of all ages and had all kinds of different professions. We recognized professors and analphabetics, noblemen and prostitutes. The decision to save someone's life was a personal one, and everyone could choose between good and evil. Unfortunately, too few took the first choice.

Mohammed Helmy is today being honoured with a certificate and a medal which shows a prisoner in a striped uniform who looks through barbed wire for his way to a free world.

Irena Steinfeldt: On the medal it reads: Whoever saves one life has saved an entire world. This is a Jewish saying from the Talmud. The idea behind it is that the life of one person is in itself a whole world.

Does the choice of the award have political implications?

Irena Steinfeldt: Politics plays absolutely no role in honouring a saviour. We informed the Egyptian embassy about this, Yad Vashem published the story on its Arab website and some Arab media outlets reported on this issue. The Holocaust is, however, still a grave problem in the Arab world because it stays in the shadows of the Israeli-Palestinian conflict. Therefore, I don't believe that recognizing an Egyptian would change much in this attitude. But it would already be a success even if only a few changed their position as a result of this recognition.

Home
Print
Newsletter
More on this topic
Holocaust Research: The Arab Righteous of the MaghrebThe Arabs and Nazi Germany: Collaborators and AntagonistsThe Holocaust in the Arab World: The Politicization of Human Genocide
Related Topics
Dialogue of Religions, Israeli-Palestinian conflict, Israeli-Palestinian dialogue, Jews in the Islamic world, Minorities in the Muslim world, National Socialism | Nazism
All Topics

In Doha, Arabs from Morocco, Tunisia, Egypt and Algeria are gathering to celebrate the first ever FIFA World Cup to be held on Arab soil. The criticism from Europe? Over the top, ... END_OF_DOCUMENT_TOKEN_TO_BE_REPLACED

November 2022 sees the Arab world firmly in the spotlight with the COP27 in Egypt and the FIFA World Cup in Qatar. Public trust in MENA governments is weak, thanks to their ... END_OF_DOCUMENT_TOKEN_TO_BE_REPLACED

Palme d’Or winner "Boy from Heaven" is a classic crossover film in which cultural elements are mixed together in haphazard and random fashion. Shady Lewis Botros bemoans the ... END_OF_DOCUMENT_TOKEN_TO_BE_REPLACED

COP27 in Sharm el-Sheikh is turning into a PR disaster for Egypt’s military regime. Instead of praise for the host, the news is full of solidarity for imprisoned activist Alaa ... END_OF_DOCUMENT_TOKEN_TO_BE_REPLACED

END_OF_DOCUMENT_TOKEN_TO_BE_REPLACED
Social media
and networks
Subscribe to our
newsletter