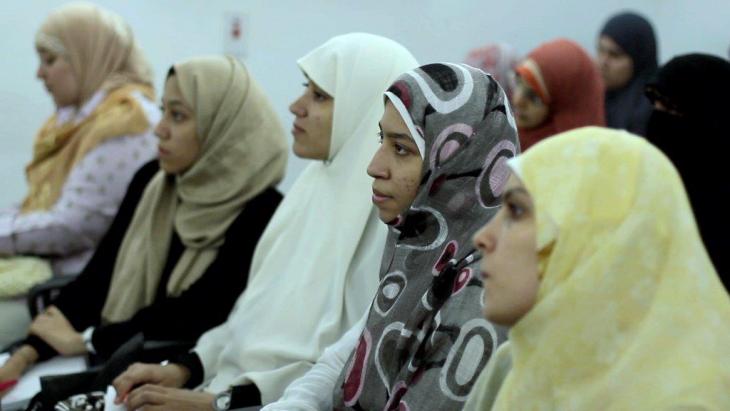 Mona El-Naggar on Her Film "Istislam"

Mona El-Naggar's documentary "Submission" offers an astonishingly close look at how the long-time secret organization conveys its ideology at the grassroots level and among Egypt's youth in particular. An interview with the film's director, Mona El-Naggar, by Martina Sabra

In summer 2012 you managed to film in a family centre run by the Muslim Brotherhood in Cairo. What is the documentary about?

Mona El-Naggar: I wanted to know more about how the Muslim Brotherhood's ideology and how they convey their ideas to the people, looking from the bottom up. The film is about a charity organization that is run and funded by the Muslim Brotherhood. One of the activities they offer is a class about premarital relationship counselling. They attract men and women in their twenties, most of them not yet married.

The family counsellor earns his living as a professor of botanic at university. He is a member of the Muslim Brotherhood and he lectures as a volunteer. My film shows how his lectures perpetuate the traditional, discriminating gender roles and the backward family ideology of the Brotherhood. At the same time you can watch how the Brotherhood attracts regular people from the street, talk to them and guide their thinking about certain issues.

The Muslim Brotherhood has a reputation of being all but transparent. How did you manage not only to attend the classes but also to film inside the classroom? 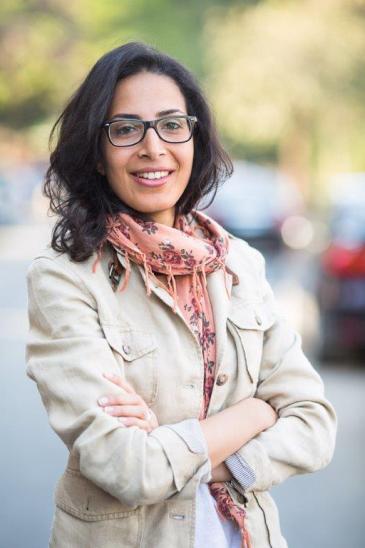 Mona El-Naggar is an Egyptian journalist and a former reporter for The New York Times in Cairo. She spent many years covering political and social developments in the Arab world

Mona El-Naggar: Essentially I just walked in. I had asked for permission and this one woman who organizes the class surprisingly said: Sure, come in. So I went in and surprisingly I took permission from the lecturer as well. I explained what I was doing. Everybody in the classroom was okay, except one young man who had an issue with me shooting his fiancée. I agreed that I would not film him and his fiancée.

The course you were filming carried the title "Aroos wa arees dedd Iblees". Literally translated this means: "Bride and groom against Satan". How does that sound to Egyptians?

Mona El-Naggar: It may sound strange to Europeans, but it definitely has humour in Arabic, and in particular in Egyptian Arabic. There is this rhyme, it is catchy. I think it is designed to be sort of funny, but also young, and interesting.

At one point, the lecturer explains that women should not work and that a woman – even an outstanding female academic – is not worth anything if she cannot cook. He also explains that women think with their hearts while men think with their brains, and that polygamy is first and foremost benefiting women because "not a single uterus should remain empty". How did you manage to remain quiet, listening to this kind of discourse?

Mona El-Naggar: It may sound strange to a European, but many of these ideas are not considered extremist in Egypt. Young Egyptians are used to hearing these kinds of things in the street or on TV. What struck me was the way in which the lecture was given – a way that does not invite questioning or second thoughts. And what struck me even more was the huge gap between these ideas and Egyptian day-to-day reality. A huge number of Egyptian households are headed by women, and often they are the main breadwinners.

A young woman and her fiancé are listening politely while being in the classroom, but a side conversation during a break reveals that they are not very convinced by what they hear about the husband's right to four wives.

Mona El-Naggar: When I caught that moment on camera, I was very happy because it captured the flirtatious moment between the guy and the girl. They are in love. He is teasing her, that he would have the right to marry more than one wife. She does not challenge his right, but she makes clear to him that this would hurt her a lot. It is obvious that this young man is not planning to have more than one wife for sure, and that she is not a woman who is willing to accept her husband having another woman. However she believes that God granted him the right to have up to four wives. She won't argue with that, but she will not accept that her husband marry another woman. I think that was an interesting moment to get that on camera, to see the flirtatious part of it, because it is very telling.

Several scenes of show how the lecturer talks about sexuality. He draws the different orgasmic curves of men and women on a flip chart, and explains that if the sexual intercourse is good, women can have several orgasms in a row. How does that match with the deep-rooted taboos concerning sex in Egypt?

Mona El-Naggar: Actually, I was shocked when I attended that session, and so were some of the participants. You have to keep in mind that there is no sex education at schools in Egypt. The Muslim Brotherhood does what nobody else is doing. They are possibly the only ones who are organizing this sort of classes. The lecturer does not consider this any taboo, because of his own understanding of religion: As long as it happens within the bounds of marriage, sex is good, there is nothing really taboo about that. Nevertheless, it was obvious that some of the women in the classroom felt very uncomfortable with the presentation. Later, when the camera was off, his wife came in and took the women to another room.

Why did you call the film "Submission"? 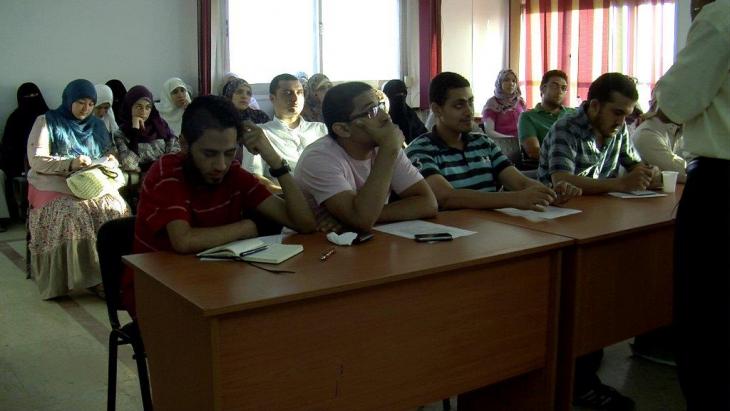 Mona El-Naggar's film was finished in early 2013, several months before the ban of the Muslim Brotherhood. It reveals how the Islamist organisation conveys its ideology at a grassroots level

Mona El-Naggar: "Istislam" means "submission", and there is also a connotation of "surrender". I don't want to assign too much meaning to the title of the film. It was essentially inspired by one of the characters saying that believing is to submit to God's will, that religion equals "submission". The film shows how submission takes place at different levels: In religion, in love relationships, in the family, in the classroom in political organizations, in a state. All these forms of submission make me wonder:  Why are we submitting our minds? Why do we surrender our ability to think, to question apparent truths, why do we not come up with alternatives?

So it would be a mistake to think that the Egyptian revolution is about freedom?

Mona El-Naggar: Obviously there is a contradiction between your willingness to submit and the quest for freedom. I think that the revolution means different things for different people. Freedom is a very romantic concept. In Egypt, many people want simply to be employed, or to be able to have a dignified form of transportation. They want to be "free" – but for many of them that simply means: free from headaches and other mundane problems.

Until now, you cannot say that anybody has achieved any real form of freedom. People are still just contesting public space, they are contesting to speak freely, to organize. Everything is up in the air, and it is a very messy situation. Nevertheless a lot has come to the surface. Different visions of how people want to live, how they want to articulate their identity, being Egyptian, to what extent religion needs to be part of that mix or not.

This is a real struggle, a historical debate – but people are not used to these kinds of debates. People are being tested, the country is being tested. You definitely see people come out and speak their minds, in many ways that they haven't before and express how they feel. To what extent this will continue, I do not know. I don't want to make any assumptions about what will happen.

The past enthusiasm of the Egyptians lives on in the Iraqis of today. But just as they were nine years ago in Cairo, current prospects in Baghdad are dim. A comparison by Birgit ... END_OF_DOCUMENT_TOKEN_TO_BE_REPLACED

Insults directed against Egyptian President Abdul Fattah al-Sisi have been particularly prominent among the hundreds of chants by Arab protestors in Algeria, Sudan, Iraq and ... END_OF_DOCUMENT_TOKEN_TO_BE_REPLACED

Political analyst Taqadum al-Khatib argues that Egypt can, in co-ordination with its European partners, develop a common vision to solve the complex conflict in Libya. For this to ... END_OF_DOCUMENT_TOKEN_TO_BE_REPLACED

The upheavals of the past year in the MENA region are arguably as momentous as those of the Arab Spring in 2011. Yet perhaps the biggest difference is that our interest seems to ... END_OF_DOCUMENT_TOKEN_TO_BE_REPLACED

END_OF_DOCUMENT_TOKEN_TO_BE_REPLACED
Social media
and networks
Subscribe to our
newsletter