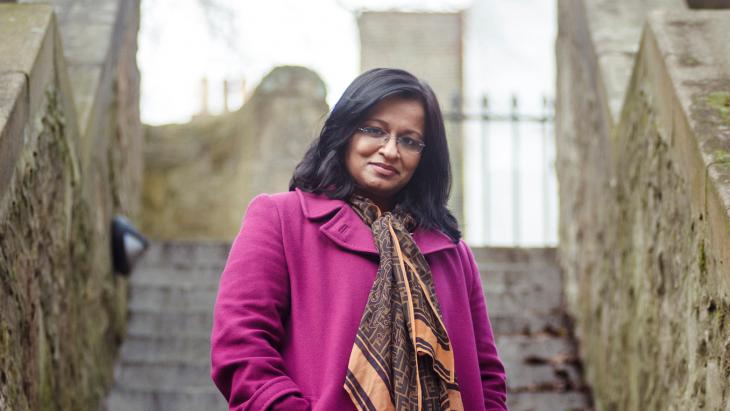 Mona Siddiqui on Brexit, Muslims and the migrant issue
How do you welcome someone?

The recent influx of refugees into Europe, seen by some as threatening its secular and liberal identity, triggered a wave of right-wing populism. Mona Siddiqui, professor of Islamic Studies at the University of Edinburgh, is nevertheless convinced that the continent is still strong enough to pull back from the anti-Islamic rhetoric. An interview by Claudia Mende

Ms. Siddiqui, how would you describe the impact of Brexit on British Muslims?

Mona Siddiqui: I don′t think there is one impact, because a lot of Muslims voted for Brexit. What we should be looking at is the rhetoric surrounding Brexit, migration and immigration as a whole. Having said that, there is some anecdotal evidence to suggest that Muslims feel Brexit has had a negative impact. They feel the entire tone of the discourse on migration and immigration has had an impact on them, despite the fact that many are British born and bred.

Why did so many Muslims vote for Brexit?

Siddiqui: As far as I know a lot of South Asian communities voted for Brexit because they too were against a new wave of migrants. They wanted more control. So presumably they saw themselves as citizens belonging to the United Kingdom and as part of that whole drive to curb continuing migration from the European Union, which I personally found really quite bizarre. Some Muslims seem to have forgotten that either they or their parents were once migrants.

Does this mean that the Muslim community is also struggling to integrate the new migrants?

Siddiqui: Migrants coming to our country don′t usually affect people′s lives. If you are talking about Syrian refugees, the deeper question for me is where does religion fit in? Particularly when citizens see themselves as citizens first and not as welcoming co-religionists. Is this a good or a bad thing? These things are often played out as issues relating to nationalism, religious identity, belonging. But at a grassroots level, things are far more nuanced. When it comes down to it, people feel that they are respected whether they are Muslim or non-Muslim; they have citizenship, a sense of belonging and of nation. New arrivals are seen as threatening this and are therefore viewed as problematic, even if they own the same faith.

The arrival of new migrants evokes questions of identity? 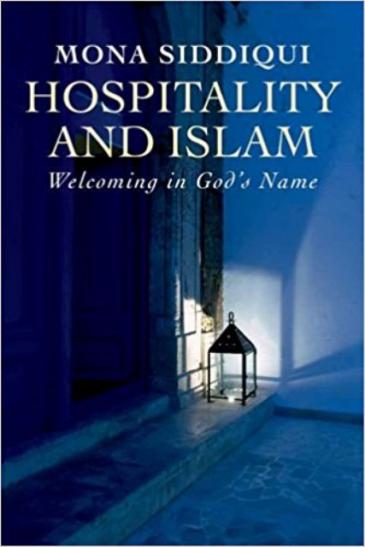 Siddiqui: I am not really sure what the identity question means. How does somebody else arriving in your country question your identity? What it does is provoke people into re-thinking identities. That′s why everybody in civil society should be engaged in these debates, rather than polarising people into small groups or regarding people as problems. These people are not going to leave any time soon. So now we have to consider how we are going to cope with this new societal framework, instead of struggling against it.

It seems that European societies basically see migrants as Muslims, even though not all of them are.

So how does the West – which, even when it′s Catholic or Protestant, is still embedded in a secular political framework – respond to this new, more visible form of Islam that the migrants are bringing? After all, this wave is different to that of the sixties and seventies.

Why is there so much unease? Is it due to Muslims bringing back religion to the public sphere?

Siddiqui: Absolutely. Muslims look different, at least the majority of Muslims do. Muslims will want their rights in the public sphere; they will want their rights in the working environment. But even if they don′t want any of that, the mere presence of an increasing number of Muslims is a problem for a secular Western Europe. Even if Muslims don′t see themselves or their faith as a problem in the secular, the perception is that the Muslim man or woman may pose a problem or a threat to secularisation.

The response to new migration right now is a rise in right-wing populism. Do you see any remedy for that?

Siddiqui: Simply addressing these issues openly and truthfully is a good step. For all those who are giving into this fear of migrants, there are just as many who are working in the opposite direction. Many are working to keep societies together, saying we should open our doors because these people are suffering. Many – mainly white, secular and western – are saying we should be welcoming the stranger and the refugee. So there is hope. Politics within the nation states of Europe has become very toxic, promoting the rise of right-wing populists and revealing their potential. At a purely human level, it doesn′t take much to unsettle people. Keep working away at that and people will eventually find a victim or a scapegoat. Those who stand out as being different are easy targets.

Are Muslims our modern-day scapegoats?

Siddiqui: No, I don′t think Muslims are necessarily scapegoats, because most Muslims still think of Europe as home. But it is very easy to use the migration of Muslims to say, well, they are all like that, they are all a problem. Even the ones who have been here for 40, 50 years are a problem. And then that can very easily lead to the issue snowballing, transforming Islam itself into an existential threat to Western Europe. Follow that narrative to its logical conclusion and there is huge potential for conflict. But I still believe that Europe is generous and liberal enough to realise that this is not the right way to go and that we need to pull back from this rhetoric.

What about the demands we make of migrants? Legally they are just required to abide by the law like any other citizen. But there are underlying expectations for them to leave their culture behind.

Siddiqui: It′s the sheer visibility of Islam which is the problem. You can practice your religion, but why do you have to look a certain way? Why do you have to dress a certain way?  Why do you have to look so visibly different? These are public signs of being a Muslim and they unsettle a lot of people. On the other hand, for some migrants that′s who they are. I don′t see that you can dispense with either one of these perspectives. There is an implication that when you come to this country in Western Europe you should leave the old culture behind. In a sense, what that really means is that you should become more visibly European. But does that mean you become more secular or you do the same things that Europeans do? A lot of migrants don′t want to do that, yet that doesn′t necessarily mean they don′t buy into the values of the law and into liberal freedom for others. If Muslims reside solely within their own communities they will not really be European.

So they should come out of their communities?

Siddiqui: People don′t say that, but it′s what they really want. Muslims need to come out of their communities and become like us, even though that is difficult to define. A lot of people think like that. Mirror image discussions, also, take place within Muslim groups: what do we want from our communities? What are we doing in Europe? What kind of Islam do we want to project?

Is there more controversy because migrants today are more openly asking to participate in society?

Siddiqui: Key here is your use of the phrase ″asking to participate″. In the United Kingdom we have Muslim members of parliament and Muslim councillors. They are not seen to be asking to participate. Sadiq Khan was elected mayor of London by a largely cosmopolitan population. You could say that London is an exception. But he was not asking to participate, he wanted to be seen as somebody who was worthy of being elected.

How would you put it then?

Siddiqui: I would phrase it differently. Western Europe has intensified its focus on diversity in the workplace over the last 20 years. Everybody gets diversity training. There are quotas in organisations that need to be filled according to religion, gender and racial diversity. That has led to a kind of reawakening of people. I′m not doing this because I am a Muslim, but because I think I can do the job. But the media makes a bigger issue out of it than it actually is.For a long time Britain had a more relaxed attitude towards migration than Germany. Has that changed since Brexit?

Siddiqui: Even though the right-wing press in Britain is currently very aggressive, I still think that there remains enough of a kind of liberal laissez-faire British attitude to say let′s make the best of what we have, let′s be empathetic than rather polarising. I don′t say that racism or discrimination don′t exist, of course they do. But I wouldn′t say you couldn′t have a Muslim this or that in the United Kingdom. In spite of the current polarising atmosphere, Britian not only has a longer history of migration than Germany, but there are also a lot people ready and willing to take things to the next stage.

Hospitality is at the core of religion.  At the same time migration is seen a threat. How does that fit together?

Siddiqui: Hospitality in theory is all well and good. But actually practising hospitality is something different altogether. We are all good at saying nice things but, whether you look at a host guest-relationship in the home or at the domestic political situation, the actual practice is very challenging. How do you welcome someone into your house, your society?

Since returning to power in Afghanistan, the Taliban have steadily eroded the rights and opportunities of women and girls, particularly their access to education. But Afghans are ... END_OF_DOCUMENT_TOKEN_TO_BE_REPLACED

The book "The Invention of the Maghreb: between Africa and the Middle East" prompts us to review basic terminology. This includes terms that we use almost every day as if they are ... END_OF_DOCUMENT_TOKEN_TO_BE_REPLACED

Tunisia has been going through a severe economic and political crisis in recent years. More than one in three young people there are unemployed. For many skilled, qualified and ... END_OF_DOCUMENT_TOKEN_TO_BE_REPLACED

At the end of every year, the team at Qantara.de gives you a run-down of the ten most-read articles on the site over the past 12 months. Here is a quick overview of the stories ... END_OF_DOCUMENT_TOKEN_TO_BE_REPLACED

The government in the Netherlands, one of the last European nations to abolish slavery, has made an historic apology. But some feel that there is still a long way to go. By Ella ... END_OF_DOCUMENT_TOKEN_TO_BE_REPLACED

To celebrate the bicentenary of the deciphering of the Rosetta Stone, the British Museum is running an exhibition entitled "Hieroglyphs: unlocking ancient Egypt" until February ... END_OF_DOCUMENT_TOKEN_TO_BE_REPLACED
Author:
Claudia Mende
Date:
Mail:
Send via mail

END_OF_DOCUMENT_TOKEN_TO_BE_REPLACED
Social media
and networks
Subscribe to our
newsletter