More genocide victims to be buried on Srebrenica anniversary 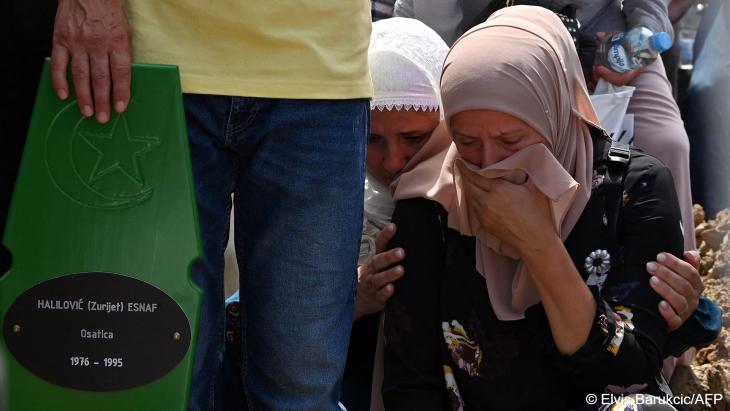 Thousands of people are expected to attend Monday's commemorations of the 27th anniversary of the Srebrenica genocide, which most Serbs and their leaders still refuse to recognise in ethnically divided Bosnia. The remains of 50 more recently identified victims of Europe's worst massacre since World War II will be buried alongside 6,671 others in the cemetery of the memorial centre.

Some 8,000 Muslim men and boys from the eastern town of Srebrenica were killed by Bosnian Serb forces in July 1995, an act of genocide under international law.

The EU's top diplomat Josep Borrell and enlargement commissioner Oliver Varhely paid tribute to the Srebrenica dead at a time when the Russian invasion of Ukraine shows "still today we cannot take peace for granted".

"Russia's unjustified and unprovoked aggression against Ukraine has brought back a brutal war to our continent," they said in a statement. "The mass killings and war crimes we see in Ukraine bring back vivid memories of those witnessed in the war in the Western Balkans in the 1990s... It is more than ever our duty to remember the genocide of Srebrenica... to stand up to defend peace, human dignity and universal values... In Srebrenica, Europe failed and we are faced with our shame."

The discovery of skeletal remains from the massacre have become rare in recent years, even though some 1,200 people are still missing, according to the Missing Persons Institute of Bosnia-Herzegovina.

The identification process has been made more difficult by the bulldozing up of the remains and their removal to mass graves in a bid to conceal the extent of the slaughter. Mass funerals of those identified are held each July 11, the takeover date by the forces of Bosnian Serb general Ratko Mladic, who has been jailed for life for war crimes.

Behrem Halilovic, aged 62, has for years hoped more bones of his brother would be identified before holding a proper burial. "We have waited 20 years for more remains to be found, but it's been for nothing. We can't wait any longer," he said on Friday as the 50 coffins travelled from Sarajevo to Srebrenica.

On 11 July 1995, his brother was 27 years old. He and their father had tried to take refuge with UN forces, but both were captured and murdered.

Behrem survived by fleeing through the woods.

Ever since the brutal 1990s war that claimed some 100,000 lives, Bosnia has been divided along ethnic lines. One half of the country belongs to the Serb entity, while the other is ruled by a Muslim-Croat federation.

More than a quarter of a century has passed, but Mladic and Radovan Karadzic, the president of Republika Srpska during the war who has also been jailed for life, remain "heroes" in the eyes of many Serbs, with their pictures still adorning many walls. Political leaders of Serbs living in Bosnia today and in neighbouring Serbia refuse to accept that a genocide took place at Srebenica, preferring to call it a "major crime".

"We have for 27 years been fighting for the truth and demanding justice, but for 27 years they have denied the truth, denied genocide," said Munira Subasic, head of a Srebenica women's association.

Last July, the former high representative for Bosnia, Valentin Inzko, outlawed denial of the genocide and war crimes, making it punishable by jail time. The move sparked uproar among Bosnian Serbs led by Milorad Dodik, who sits on the country's collective presidency.

He has launched a process of Serb withdrawal from the army, judiciary and the tax system, stirring fears of breaking up the country or starting a new conflict.    (AFP)

END_OF_DOCUMENT_TOKEN_TO_BE_REPLACED
Social media
and networks
Subscribe to our
newsletter