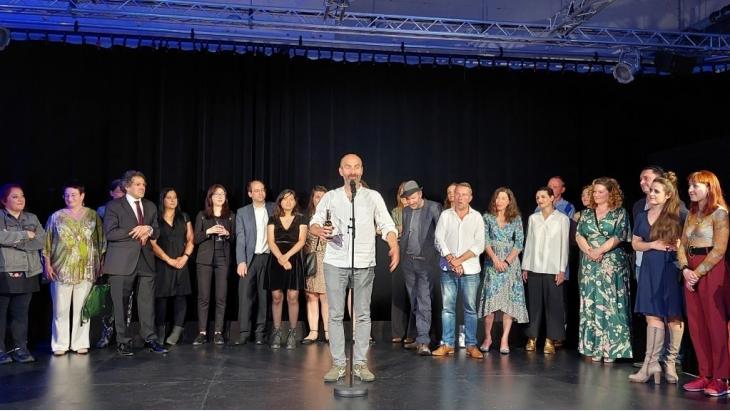 This year’s Morgenland Festival opened with the premiere of Kinan Azmeh’s musical theatre piece, “Songs for Days to Come”, based on fifteen poems by contemporary Syrian poets. Marian Brehmer reports for Qantara.de

Kinan Azmeh moves slowly across the stage. He rolls past Sami, the play’s protagonist, who is sitting on a chair in front of a high, metal wall, staring into space with a blend of apathy and despair. Azmeh’s clarinet can express a whole range of emotions in a matter of moments. Sound and hope blend in the subtly tuned quarter notes, and everything that is about to unfold onstage in the ninety minutes to come seems to already be present.

From the pit, the orchestra accompanies Azmeh with romantic-arabesque rhythms, creating a soundscape for a performance that has demanded a lot from this mid-size North German theatre. Kinan Azmeh’s composition Songs for Days to Come is the largest production the Morgenland Festival Osnabruck, led by Michael Dreyer, has ever ventured to put on in its history.

The project takes is based on fifteen poems by contemporary Syrian poets, using verse to process the pain of the Syrian civil war. The poets all come from Azmeh’s circle of friends; Azmeh remained in contact with them while developing the piece. The poems form the foundation for three song cycles and one libretto, composed by Azmeh himself. The words to these songs are all in Arabic, giving the audience a sense of the beauty and melody of the Arabic language.

The Theater Osnabruck is packed to the rafters for the launch of this year’s Morgenland Festival. There’s a sense of anticipation in the air. This year’s launch is expected to be a brilliant comeback for the popular festival, which showcases oriental music in Central Europe, following two years during which events had to be held online or slimmed-down due to COVID-19.

Songs for Days to Come uses the story of a Syrian man, Sami, to help the audience grasp the effects of violence and trauma on normal people. Sami, masterfully played by Jan Friedrich Eggers, represents the fates of countless Syrians, their lives brutally rocked by civil war.

The piece features flashbacks from Sami’s life, told in a series of haunting scenes – beginning with his seemingly pointless career as a civil servant, which sparks an internal struggle in Sami long before the civil war erupts outside. The feelings of reluctance inside him, which are spoken aloud by somewhat frivolous-seeming ladies in flowing dresses, drive him ever more towards despair.

As the war rears its head, Sami’s reality begins to disintegrate and the clamour of voices on stage grows ever more chaotic. Moments from the war are re-told in set pieces – a rigid dictatorship, the horror of terror bomb attacks and the agonising uncertainty about the future.

One moving scene tells the story of Sami’s wedding. Azmeh, the clarinettist, and Issam Rafea, an oud player, who both now live in New York, play musicians at the celebration, and the Osnabruck opera choir takes on the role of a host of high-spirited revellers. Yet the initial joy and levity are suddenly transformed into tragedy by a bombing. The bride’s gown is now stained with blood, symbolic of all the lives and dreams the war destroyed.

Syrian singer Dima Orsho, a familiar face at the Morgenland Festival, intones a song of lament, her hands reaching towards the sky. The enchantingly beautiful melody is based on a 2013 poem by Aref Hamza: ‘A half-moon shines over the cities where no-one remains...’

With its emphasis on poetry, Songs for Days to Come also celebrates the Arabic language, despite its bitter edge. The piece goes beyond mourning what has been lost to highlight the resilience of Syrian art. The Osnabruck opera choir underwent months of language training in order to be able to perform the poems with the correct pronunciation, and director Daniel Inbal got to grips with the subtleties of Arabian styles of music. As this evening demonstrates, their efforts were worth it.

Ping-pong balls as symbols of protest

The play’s final scene sees ping-pong balls rain down upon the stage – alluding to a protest campaign by Syrian activists, who, during the civil war, inscribed a huge quantity of ping-pong balls with messages such as, ‘Freedom!’ and ‘You and I are brothers’ in an attempt to move soldiers who were loyal to the regime to lay down their weapons in the face of their own people. The balls were released down a steep street close to the presidential palace in Damascus.

Azmeh uses the ping-pong balls as a symbol of the creativity of resistance and the non-violent origins of Syrian protest, even if they ultimately culminated in a never-ending spiral of violence. ‘War brings out the worst in us. We no longer know who we are,’ Azmeh writes in his piece.

Azmeh may have lived in the U.S. since 1998, but his creative process continues to revolve around the musical legacy of his homeland and he sees his composition as a universal piece about the times we live in, shaped as they are by tragedies. “Songs for Days to Come is inspired by Syria, but it speaks to the whole world”, Azmeh is quoted as saying in the brochure accompanying the play. And indeed, Azmeh’s work has recently gained new, unexpected relevance on the edge of Europe, with the war in Ukraine.

Translated from the German by Ayse Turkoglu

Music in the Middle East: Attuned to a different classical

Conference on music in the Islamic world: Documenting diversity

Home
Print
Newsletter
More on this topic
Michael Dreyer and the Morgenland Festival: A hub connecting Orient and Occident16th Morgenland Festival Osnabruck: A virtual journey of sound across the BalkansKinan Azmeh and Dima Orsho: "All we can do is sing and play our hearts out"Oriental music in the West: A creative musical laboratory at the heart of Germany
Related Topics
Arab music, Arab world, Arabic literature, Dialogue of Cultures | Intercultural Dialogue, Musical worlds, Spotlight on bridge-builders, Syrian Civil War
All Topics

Algeria‘s regime is again cracking down on anti-fracking activists and the unemployed in the country‘s south. Yet EU countries remain keen to scale up their energy cooperation ... END_OF_DOCUMENT_TOKEN_TO_BE_REPLACED

Bachtyar Ali sends the hero of his latest novel – "Mein Onkel den der Wind mitnahm" – literally flying. Jamshid is so thin after his years as a political prisoner that a gust of ... END_OF_DOCUMENT_TOKEN_TO_BE_REPLACED

For a century, the Kurds and other minorities in Turkey have been subject to state repression. With his dissertation "The Kurdish Question in Turkey", political analyst Ismail ... END_OF_DOCUMENT_TOKEN_TO_BE_REPLACED

Anti-Semitic motifs have no place at Germany’s documenta art show or anywhere else in the world, stresses Meron Mendel, director of the Anne Frank Educational Centre in Frankfurt ... END_OF_DOCUMENT_TOKEN_TO_BE_REPLACED

A new exhibition, "Syria – Against Forgetting", at Cologne’s Rautenstrauch-Joest-Museum focuses on Syria's artistic and cultural heritage and pays tribute to the country before ... END_OF_DOCUMENT_TOKEN_TO_BE_REPLACED
Author:
Marian Brehmer
Date:
Mail:
Send via mail

END_OF_DOCUMENT_TOKEN_TO_BE_REPLACED
Social media
and networks
Subscribe to our
newsletter