Abdellah Taïa is the first Moroccan writer to openly acknowledge his homosexuality. The author risked "coming out", however, only after he settled in France. A portrait by Kersten Knipp 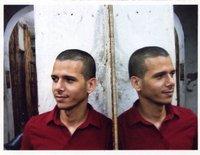 A freethinker or traitor? The Moroccan writer Abdellah Taïa is a polarizing figure

​​The Moroccan writer Abdellah Taïa is only 35 years old, but he has already had three autobiographically tinged novels published, and a fourth has just appeared. It is entitled Une mélancholie arabe (An Arab Melancholy) and is also an account of the author's early years.

There is a lot to tell, especially because he grew up at a time and in a region that made coming of age very difficult. Morocco is the home of sacrifice – at least that is how Taïa depicts it in his novels – a place of political, social, and psychological deprivation. Taïa spent his youth under the rule of Hassan II. The king suppressed the opposition with an iron hand and took particularly harsh steps against Western-style youth protests.

At the same time, he failed to support the protestors, to offer them opportunities. The young people had no prospects; planning for the future became a game of chance. In addition to political pressure, there was – and is – religious pressure. Moroccan society has only partially opened up to modern times; it has remained essentially conservative. In particular, relations between the sexes are strictly regulated. After a certain age, boys and girls are carefully separated from each other.

Homosexuality as an alternative practice

​​That, says Taïa, is precisely why many young men have turned to homosexuality, which they consider simply an alternative practice, however. "But it was different for me," he says during an interview. "I was serious about it. Homosexuality was not a substitute but a deeply felt need." After he admitted that to himself, life became difficult. Many tears were shed, he recalls – for years, in fact.

That did not prevent him from satisfying his longings, however. Morocco is a strict but sensuous country. He had affairs with men of his own age, but with older men as well – there was scarcely an exploit that he did not let himself in for. His books describe the relevant experiences in a graphic, not to say drastic, way. They remained affairs, however – a steady relationship and the idea of acknowledging his homosexuality were taboo.

Culture offered both escape and support. His father, the caretaker of the public library in Rabat, introduced his son to the world of books, with their spirit and, above all, their sensuousness. "He wanted me to become familiar with the smell of books," he writes in the novel Mon Maroc, which, like all of Taïa's works, has not been translated into German yet. "It was important to him that their magical, unique fragrance go to my head, to my senses."

​​Later, books also provided him with more than just small escape zones. In the mid-1990s, Taïa received a grant to study in Geneva for one semester – the opportunity for him to make the leap from Morocco to Europe, more precisely, to France, Paris. In the French capital, he became a sharp critic of conditions in Morocco – or rather, the harsh morality of the country, which, officially at least, does not tolerate same-sex love. In an interview with the liberal Moroccan political magazine Tel Quel, Taïa publicly acknowledged his homosexuality. No Moroccan writer before him had dared to do that.

The interview generated great excitement as a result. The comments of the French-speaking readers of the magazine were rather reserved, but when he repeated his statements in several of the country's Arabic-language media, a storm of indignation broke out. He was accused of having defiled the reputation of the country and the religion; a man like him was not an author, but ought to be burned. He had only brought his homosexuality out into the open in order to ingratiate himself with the West.

In fact, during the interview, Taïa only took up the theme that he had already written about in his books – novels about awakening homosexuality, but many other things as well. In extremely sensuous, graphic language, Taïa describes life in Morocco in the 1980s and 90s, talks particularly about the needs and yearnings of a generation for whom many dreams were forbidden. Through these narratives, his novels depict the customs and manners of a society; they reflect in microcosm what characterizes the entire country in macrocosm. 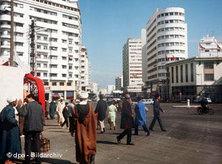 Moroccan society has only partially opened up to modernity. It remains essentially conservative

​​Taïa's literary role model is the Moroccan writer Mohammed Choukri (1935–2003), who came from an extremely poor background. In his autobiography, For Bread Alone, Choukri described his youth with a vividness that was unthinkable up to that time, told of a life marked by violence, sexuality, and poverty. Taïa himself was spared such circumstances. Yet he shows, not only in his fiction, but in his journalistic texts as well, how much his and following generations still have to suffer under the situation.

When a young suicide bomber blew himself up in an Internet cafe in Casablanca in March of last year, in an article published in the French newspaper Le Monde, Taïa described the living conditions of the young man and his companion – a situation which he knows from personal experience. He could imagine how the two men felt, he wrote in the article. Although he could not excuse the attack, he could understand the reasons for it. He himself was saved by books. Others were and will be victims of their circumstances, and that is also what his novels are about.

Interview with Habib Selmi
"Writing Is a Journey Using Language from Within"
Habib Selmi is one of the most important Tunisian authors writing in Arabic. In this elaborate interview with Samuel Shimon, Selmi talks about his relationship to his mother tongue, his dislike of French literature and the art of the novel

END_OF_DOCUMENT_TOKEN_TO_BE_REPLACED
Social media
and networks
Subscribe to our
newsletter