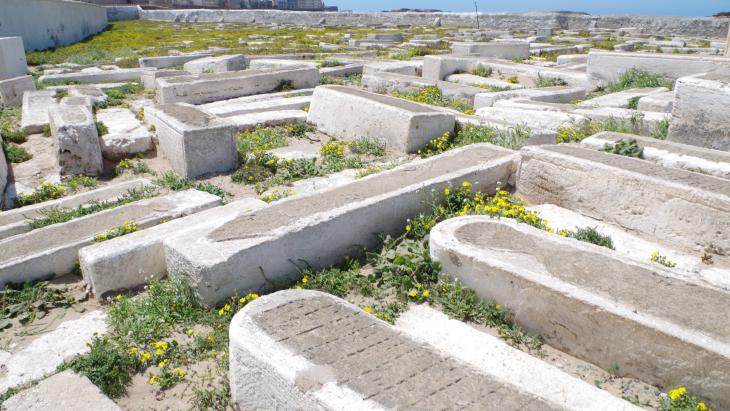 The Rabbi of Essaouira

The presence of Jewish tradesmen helped shape the character of Essaouira in Morocco. Traces of the portʹs Jewish heritage are evident to this very day. Every year Jews from all over the world make a pilgrimage to Essaouira, keeping memories of the city’s Jewish character alive. By Claudia Mende

At the old Jewish cemetery, all is quiet. A tranquil melody wafts on the breeze. A small group of worshippers prays at the mausoleum in the centre of the burial ground, a man sings. An old lady dressed from head-to-toe in black explains that this is the grave of Rabbi Pinto. She says she comes here every year from Paris to pray at the mausoleum of the venerated Rabbi. And meets other Jews from all over the world.

The Jewish cemetery lies directly on the coast, outside the historic old town. Just a few minutes' walk from the Christian cemetery. There's a guard at the entrance, but no police. The gravestones are strewn at random, with weeds growing in between. The Hebrew inscriptions are severely eroded, because this final resting place is so often flooded by sea water.

A banner on the cemetery wall bids worshippers welcome to Hilloula, on the pilgrimage for Rabbi Haim Pinto, buried here in 1845. To this day, the Rabbi is revered as a just man who had the ear of God. Those who make the pilgrimage to his grave every year are for the most part Jews, originally from Morocco, who were forced to leave their childhood home following the foundation of the State of Israel in 1948.

Located on Moroccoʹs Atlantic coast, Essaouira is keen to promote its Jewish legacy. The cemetery, pilgrimage and synagogues are mentioned in pamphlets at the tourist office. There are special tours focusing on aspects of Jewish life in the city. Traders in the souk encourage travellers to go and take a look at the synagogues.

In much of the Arab world, the idea of a Jewish pilgrimage would be unusual, if not impossible. But not in Essaouira. 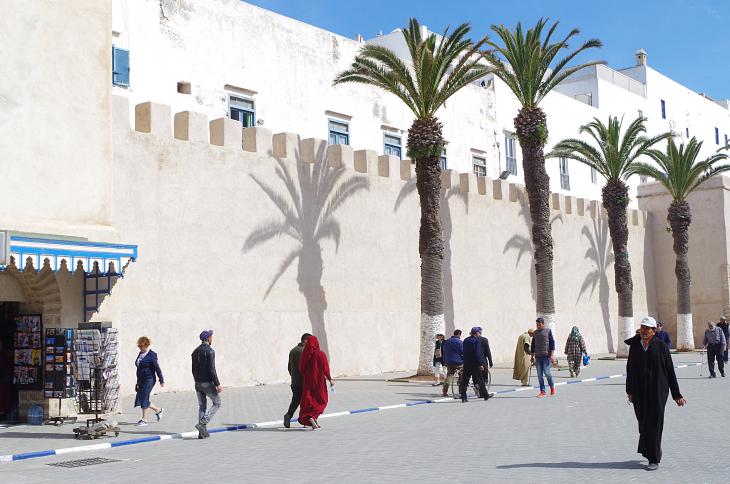 Mogador, a thriving economic hub: looking to establish contact with European tradesmen, Sultan Sidi Mohammed Ben Abdullah invited Jewish traders to settle in Essaouira in the eighteenth century. He also engaged in some major construction works, building most of the Old Town and the port fortifications. By the nineteenth century, Jews made up around 40 percent of the cityʹs population and the settlement had become North Africaʹs leading port

"The pilgrimage takes place every year," says Samir El Harrouf from the city's tourism office. "For us it's totally normal. The pilgrimage is part of our cultural heritage." Up to 2,000 worshippers attend the main pilgrimage days in September. Then he adds: "Essaouira is the only Arab city where most of the residents were once Jewish."

It's a claim that's difficult to verify. Whatʹs clear is that a great many Jews lived here in the 19th century – historians estimate around 40 percent of the total population. It was Sultan Sidi Mohammed Ben Abdullah who settled the Jewish traders here in the 18th century. He wanted them to help him establish contact with European tradesmen. The Sultan built most of the Old Town and the port fortifications.

The settlement, known at the time as Mogador, became the most important port in North Africa. Its role as a trading hub between Timbuktu and Europe brought it great wealth. The mellah, or Jewish quarter, was mainly populated by poorer Jews. The better-off families had their houses in Muslim neighbourhoods. At the time the city was said to have more synagogues than mosques.

These days, Essaouira is known first and foremost as a paradise for kiteboarders and surfers. The windsurfing world cup took place on the beaches outside the town for the first time at the end of March this year. The completely walled-in Old Town was recognised as an UNESCO World Cultural Heritage site in 2001.

Unlike Agadir, which is located further to the south, Essaouira has never become a mass tourism destination due to its strong winds. But with its white facades and narrow alleyways housing craftspeopleʹs workshops, Essaouira is popular with independent travellers and downshifters. Ever since Jimmy Hendrix visited the place in the 1960s, it has attracted hippies and musicians. Less is known about its Jewish legacy.

No diplomatic ties, but 50,000 Israeli tourists per annum

Morocco once had the largest Jewish community in the Arab world. The first Jews arrived in ancient times following the destruction of the Jewish Temple and settled amongst the local Berber population. Many Jews fled Spain after the Reconquista in the late 15th century and found refuge from persecution. Because of the many different waves of immigration, Morocco's Jewish population is particularly diverse. 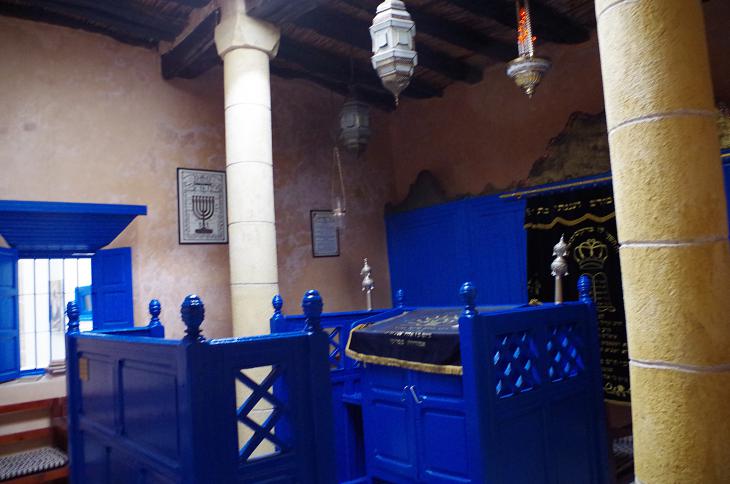 Open to pilgrims and tourists alike: once just one of many synagogues in Essaouira serving the local Jewish population, the Rabbi Haim Pinto Synagogue now houses a comprehensive exhibition of historic photographs documenting Jewish life in the city pre-1948. Many Moroccan Jews left the country following the founding of Israel, some to support the fledgling state, most for fear of Arab reprisals

When the State of Israel was founded in 1948, some 250,000 Jews lived in Morocco, but most left the country in the years that followed. Today, it's thought some 5,000 Jews still live in Morocco, the largest community with around 1,000 members being concentrated around Casablanca. This is also home to the only Jewish museum in the Arab world. Officially, Morocco does not maintain diplomatic ties with Israel, but some 50,000 Israeli tourists visit the country every year.

Most of the Jews in Essaouira left the city after 1948. The mellah, the old Jewish quarter, has fallen into disrepair, poor Moroccans have moved in and it's likely that looting also took place. Many of the buildings are dilapidated, some so badly there's a risk they might collapse. Poor drainage and invasive seawater are eroding the foundations.

City authorities have taken the decision to do something about it, but not much has happened to date. Today, visitors can visit two synagogues in the direct vicinity. The Rabbi Pinto Synagogue has been accessible for some time already. It hosts a comprehensive exhibition of historic photographs documenting Jewish life in the city pre-1948. On the second floor are the rooms for women, who in Orthodox congregations pray separately from the men.

Preserving a legacy for future generations

The second synagogue, Slat Lkahal, is situated in the immediate vicinity. A five-year restoration period funded by private donations from Jews from all over the world and supported by UNESCO finally culminated in its re-opening at the end of 2017. Rubble and debris were cleared away, masonry renewed.

Haim Bitton, an elderly man with the same forename as the famous rabbi, is chairman of the Slat Lkahal organisation and one of three Jews living permanently in the city again. He grew up here, left Morocco as a young man and now, in retirement age, he has returned. Bitton is a reserved man who doesn't like talking about himself. He doesn't want to answer general questions about Jews in Morocco. But it is largely due to him that Slat Lkahal was able to be restored and made accessible to visitors again. A plaque expresses gratitude to the most important donors.

Bitton is unhappy with the condition of many historic documents that couldn't be properly stored. He shows some stained old student lists from the old Jewish school, where his father was principal. With the restoration, Haim Bitton wants to remind people of the peaceful coexistence of Jewish and Muslim communities and pass it on as a mission for future generations.

But for many Jews this has an aftertaste, because most of the visitors to the synagogues are tourists, not worshippers. Services only take place here when groups of Jewish pilgrims come. In contrast to Marrakesh or Casablanca, there isn't a thriving Jewish community here.

Visitors can nevertheless gain an impression of what that thriving community would have felt like. They can stroll through the Old Town and still find the Star of David on some door lintels. Traders in the souk enjoy showing the old silver jewellery of the Jewish Berbers who once introduced this handicraft. For example, a favourite motif in times gone by was the hand of Fatima, a protective symbol in popular Islam, combined with the Star of David. Hung up somewhere in the house, the Islamic and Jewish motifs joined forces to ward off evil spirits.

The Muslim-Jewish coexistence was not free of tensions, says American historian Daniel Schroeter, an expert on Jewish life in North Africa. But Jews made an important contribution to Arab culture, co-influencing urban life, literature and above all music. This tradition has for the most part been discontinued. Essaouira serves as a reminder of the richness that has been lost.

FIT TLV is the latest initiative by Tel Aviv’s youth to keep on partying during the coronavirus crisis. FIT describe themselves as "Free. Individuals. Together" – cycling, ... END_OF_DOCUMENT_TOKEN_TO_BE_REPLACED

In 2012, fed up with people expressing clear-cut opinions on the rights and wrongs of the Middle East conflict, Canadian conflict researcher and long-time Israeli resident Corey ... END_OF_DOCUMENT_TOKEN_TO_BE_REPLACED

The Islamic Republic of Iran has been subject to sanctions ever since its creation in 1979. The more the regime has entrenched itself and expanded its power in the region, the ... END_OF_DOCUMENT_TOKEN_TO_BE_REPLACED

Given that the political landscape in Israel is once more expected to shift to the right in the upcoming general elections, philosopher Omri Boehm argues in his forthcoming book ... END_OF_DOCUMENT_TOKEN_TO_BE_REPLACED

END_OF_DOCUMENT_TOKEN_TO_BE_REPLACED
Social media
and networks
Subscribe to our
newsletter