Activists Fight for Right to Eat during Ramadan

As Muslims around the world celebrate Ramadan, rights activists in Morocco are battling what they call the "religious radicalization" of the month of fasting, exposing conflicts between tradition, power and modernity. Alexander Goebel reports from Rabat

Rights activists in Morocco fear Ramadan is being hijacked by Islamists

​​ Last year, a group of young Moroccans campaigning to change the law banning eating in public during the Muslim Ramadan fast made plans for a picnic via social networking site Facebook.

They organized to meet in Mohammedia near Casablanca for the public feast. It was a risky move because under Moroccan law, eating in public during daylight hours in the holy month is considered a crime.

Sure enough, the authorities in Morocco monitored the Facebook group and cracked down before the demonstration could take off.
"We were met by hundreds of police at the station in Mohammedia. They were like an army waiting for terrorists," Zineb Elghzaoui, one of the co-founders of the group called Alternative Movement for Individual Freedoms (MALI), remembered.

"We were abused, forced back on the train and then we were arrested and interrogated for hours. It's only because the incident attracted international attention that the police finally closed our cases - for now," she said.

The incident initially sparked online comments ridiculing the police clampdown, with articles carrying headlines such as "100 Policemen against 10 Sandwiches in Morocco." But things took an ugly turn when Moroccan media reportedly began a witch hunt and the campaigners received dozens of e-mailed death threats.

Campaigners in Morocco aim to spark a debate about individual freedoms

​​ For their part, the founders of MALI say their demonstration wasn't in any way targeting Moroccan society or Islam. And, neither were their actions aimed at Ramadan, one of the five pillars of Islam.

MALI says it's not against fasting but rather in favor of decriminalizing non-fasting. Zineb El Ghazaoui said the group's criticism of what it calls "totalitarianism of religion" has struck a chord in Morocco. The activist said the state's excessive use of force against a group of fast-breaking teenagers spoke volumes.

"Of course we're scared - that's exactly what the government wants. Foreigners in Morocco don't dare eat in public and Muslims who secretly break their fast are punished. Some people even go to prison because they're denounced by their neighbors," Elghazaoui said.

"But by definition, Ramadan is a private matter between me and God alone. You don't fast for others even though that's what has been hinted to us. But all this here has nothing to do with common sense."

But the crackdown on the fast-breakers goes to the heart of a politically explosive issue in Morocco - the separation between the church and the state and the power of the monarchy. 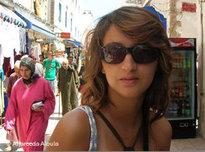 ​​Under Morocco's constitution, Islam is the country's state religion and the king is the highest keeper of the faith. However the constitution also guarantees all citizens the right to freely practice their religion. At the same time, according to paragraph 222 of the penal code, those who publicly eat during Ramadan can face a fine and up to six months in prison.
That's a blatant contradiction, according to Zinab Elghzaoui, and one that she said violates the UN human rights treaty that Morocco has signed up to.

"I think that the allegedly big social consensus during Ramadan is in reality just hypocrisy. A Moroccan only exists within the framework of the Umma - the religious community of Muslims. The Moroccan as an individual, as a citizen in a state based on rule of law - that only exists in theory but not on a practical level," Elghzaoui said.

Morocco wasn't always so conservative when it comes to religious matters. In the 1970s, the country was considered a beacon of liberalism when it came to Ramadan. Students at universities could eat, drink and smoke in public. That's unthinkable today.

Elghzaoui admitted that Morocco has made progress in social issues in recent years thanks to King Mohammed VI who she said had ended the backwardness of the dictatorship of King Hassan II.

But at the same time, the civil rights activist said she feared that the state had allowed Islamists to gradually chip away at the protection of individual freedoms.

Casablanca's Hassan II Mosque: under Morocco's constitution, Islam is the country's state religion and the king is the highest keeper of the faith.

​​ But conservative Moroccan politicians don't agree with Elghzaoui. Abdellilah Benkiran, the general secretary of the Justice and Development party (PJD), describes the Ramadan fast-breakers of MALI as "firebrands."

"We're in the middle of a transformation process in Morocco but we can manage very well without these rabble-rousers," Benkiran said. "These people are pathetic provocateurs - they think 'modernism' means an atheist state. And as Muslims we say 'not with us.' Not at the price of our religion. The absolute majority of the people here know that Ramadan is a wonderful thing."

Back to the liberal future

It's something that Zainab Elghzaoui knows well. She's aware of surveys that show religion is indispensable for 98 percent of the Moroccan population. And that's why, she said, she will continue her fight in the name of religion as a right for each individual and against the radicalization of Ramadan as a social pressure tool.

Elghzaoui said she's campaigning for a state that shakes off its helplessness against the use of religion as an instrument.
Zineb Elghzaoui wants to go back to the future - to the religious liberalism of Morocco in the 1970s. It remains questionable whether she will succeed.

Kristiane Backer on Ramadan
Fasting from Anger, Impatience and Negativity
As a host on the music channel MTV Europe, Kristiane Backer became an icon of 1990s pop music culture. In 1995 she converted to Islam. In this article, Backer shares some personal Ramadan experiences and reflects on the meaning of this Islamic month of fasting

END_OF_DOCUMENT_TOKEN_TO_BE_REPLACED
Social media
and networks
Subscribe to our
newsletter