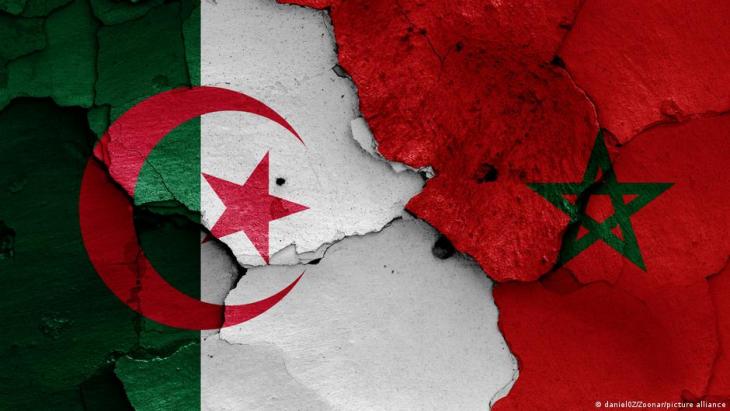 Morocco and Algeria
A rivalry stretching back decades

Algeria's decision to unilaterally sever diplomatic ties with Morocco in August 2021 – days after the presidency announced in a statement their relations would be reviewed – was all but surprising. The hostility and rivalry between the two neighbouring countries go back years. By Ilham Rachidi

Tensions greatly intensified between the two countries in December 2020 when Morocco normalised its relations with Israel in exchange for U.S. recognition of the kingdom’s sovereignty over the Western Sahara territory, and since that time, Algeria has appeared increasingly isolated diplomatically. This March, the Algerian regime suffered a new defeat when Spain expressed its support for Morocco’s autonomy plan for Western Sahara.

Verbal attacks have continued, if not increased, in their intensity over the last few months. In July, Moroccan Ambassador to the United Nations Omar Hilale’s open support for the self-determination of the Kabylie region in response to Algerian support of the Polisario Front infuriated Algerian leaders, prompting the recall of Algeria's ambassador to Morocco.

Meanwhile, the Pegasus scandal, in which Morocco was accused of hacking the phones of Algerian political and military officials among others – which it denies – was similarly making headlines. Further, Algeria accused Morocco of supporting the Movement for the Self-Determination of Kabylie and the Islamist Rachad movement, both recognised as terrorist organisations by Algeria, and also blamed Morocco for being behind deadly wildfires in Kabylie, without providing any evidence.

Last November, three Algerian truck drivers on their way from Mauritania were killed in a bombing in Western Sahara. This incident, which was attributed to Morocco by Algeria and which Morocco has not officially responded to, raised fears of a direct military conflict for the first time in decades. Although it remains unlikely, this tragic event has increased tensions in an already volatile region, even more so since the end of the 29-year ceasefire between Morocco and the Polisario in 2020. 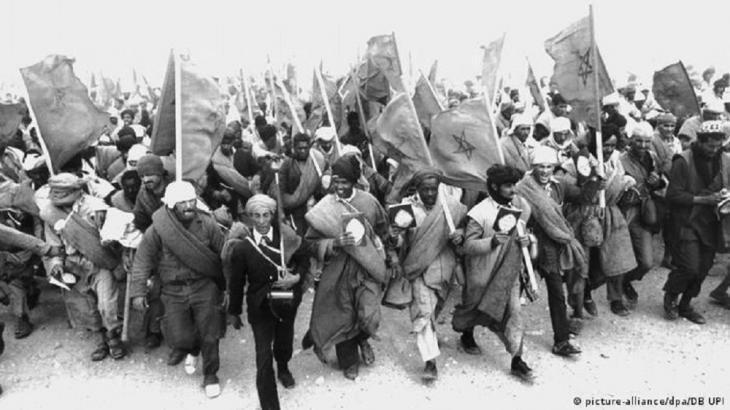 Relations worsened dramatically following the Green March: in November 1975, the geopolitical dynamic turned to Morocco’s advantage when 350,000 unarmed Moroccans marched towards the Spanish colony of Western Sahara. The territory was divided between Morocco and Mauritania a few days later under the Madrid Accords, which included neither the Polisario nor Algeria as parties to the agreement. In December, the Algerian regime retaliated by initiating the sudden expulsion of 45,000 Moroccan families based in the country

The land border between Morocco and Algeria has already been closed since 1994 at the behest of the Algerian regime, after Morocco blamed its secret services for a terrorist attack in a hotel in Marrakesh carried out by French citizens of North African descent, imposed visas for Algerian nationals, and expelled those who didn't hold residence permits.

This latest diplomatic break, then, is not unprecedented, but has simply made the reality on the ground more obvious. So far, its main consequences have simply been the closing of Algerian airspace to Moroccan planes and Algeria’s refusal to renew the contract of the Maghreb-Europe gas pipeline, which supplied gas to Spain via Morocco.

For over four decades, the Western Sahara issue has purportedly been the main reason for the poor relations between the two countries; their positions over the status of the territory are irreconcilable. Morocco considers its sovereignty over Western Sahara as a non-negotiable national cause which drives its foreign policy, whereas Algeria supports the pro-independence Polisario Front.

In November 1975, the geopolitical dynamic turned to Morocco’s advantage and the relationship worsened dramatically after the Green March, in which 350,000 unarmed Moroccans marched towards the Spanish colony. The territory was divided between Morocco and Mauritania a few days later under the Madrid Accords, which included neither the Polisario nor Algeria as parties to the agreement. In December, the Algerian regime retaliated by initiating the sudden expulsion of 45,000 Moroccan families based in the country.

Struggle for leadership within the region

In March 1976, Algeria recognised the Sahrawi Arab Democratic Republic, leading Morocco to cease diplomatic ties between the two countries. In justifying their rigid stance on the Sahara issue, Algeria’s rulers continue to argue they support the right to self-determination – a principle on which modern Algeria was built, but also a convenient argument to antagonise Morocco. They also claim the settlement of the Western Sahara issue should be discussed in international settings, such as through the United Nations, rather than directly with Morocco. 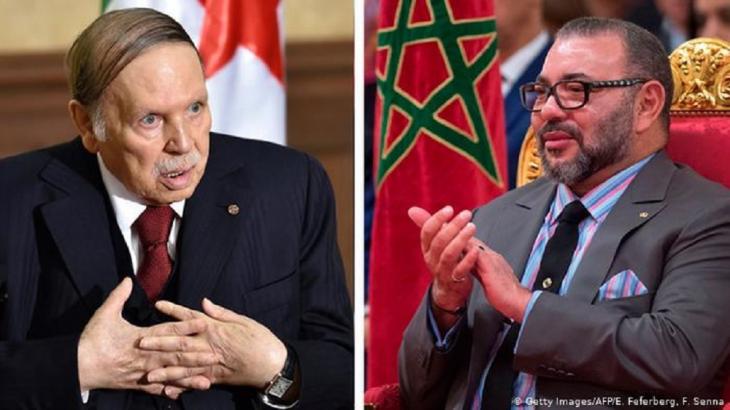 The heads of state of Morocco and Algeria haven't held official talks since Mohamed VI and the late Bouteflika met in 2005 at the Arab League Summit in Algiers. As a result of this distance, today’s political actors now hardly know each other, while the new generation has grown up consuming misconceptions and cliches perpetuated by pro-government media on both sides, which frequently defame the other country’s political figures and focus on each other’s internal crises

However, the opposition over the Western Sahara issue is actually a fixation point of tense relations between Algeria and Morocco. The real source behind the tensions stems from a struggle for leadership in the region and an unresolved colonial-era land dispute, which led in 1963 to a swift yet still resented war.

The diverging political and ideological path of the two newly independent states soon became blatant when in the 1960s, socialist Algeria welcomed Morocco’s leftist opposition figures on its soil, including in its then-renowned university in Algiers. While their people share the same language, culture, and religion, the nature of the two countries’ political systems, their recent histories, and their strategic alliances, especially during the Cold War, have caused them to drift apart.

When they partook in a shared struggle against colonial France and Morocco’s frontier served as a rear base for the Algerian Front de Libération Nationale, their trajectory seemed intertwined. Up until Algeria's independence, the two countries’ elites had close relations and even family ties; there are well-known examples of political figures who had links to both countries at that time. One of Morocco’s most ardent supporters of the monarchy, Abdelkrim El Khatib, had an Algerian father. His cousin Youcef Khatib was a commander of the Armée de Libération Nationale during Algeria's independence war.

On the Algerian side, Cherif Belkacem, a member of the Oujda clan – the component of the FLN that had seized power – and a leading political actor under Algerian President Houari Boumediene, was partly Moroccan. Like him, former president Abdelaziz Bouteflika, although of Algerian descent, grew up in Morocco. This is why, in spite of his long career as Algeria's leading diplomat, Bouteflika’s election in 1999 had raised hopes among Morocco’s political elite of better relations between the two countries.

Fostering misconceptions and cliches – on both sides

Unsurprisingly, no improvement took place during his twenty-year rule. The heads of state haven't held official talks since Mohamed VI and the late Bouteflika met in 2005 at the Arab League Summit in Algiers. 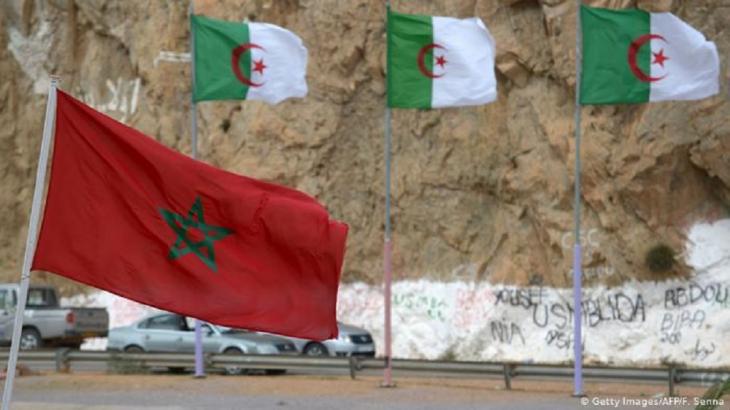 Local populations pay a heavy price: families have been split for decades. To reach the other side of the border, people have been forced to go to Casablanca and travel to Algiers by plane, or vice versa. While officially closed, the border was nonetheless still able to be permeated by hydrocarbon and merchandise smugglers. Moroccan agricultural workers, who have long cultivated land across the border, have found themselves in an absurd situation as a result of the closures. March 2021 saw protests in Al Arja in the Figuig region of Morocco, following a renewed expulsion of workers by the Algerian authorities

As a result of this distance, today’s political actors now hardly know each other, while the new generation has grown up consuming misconceptions and cliches perpetuated by pro-government media on both sides, which frequently defame the other country’s political figures and focus on each other’s internal crises. Yet, the longstanding political feud generally has not impacted both societies’ perceptions of the other, with people regularly calling for the opening of the border. For example, sports events, during which they often support each other, indicate a genuine sense of brotherhood.

Unfortunately, local populations have paid a heavy price, with families split for decades. In order to reach the other side of the border, people have been forced to go to Casablanca and travel to Algiers by plane, or vice versa. While officially closed, the border was nonetheless still able to be permeated by hydrocarbon and merchandise smugglers, until Algerian authorities strengthened control over the last years.

More recently, Moroccan agricultural workers, who have long cultivated land across the border, have found themselves in an absurd situation as a result of the closures and protested in March 2021 in Al Arja in the Figuig region in response to their expulsion by Algerian authorities. Many observers fear the current break in relations might impact communities established in both countries and, should the political situation worsen, lead to new deportations.

On several occasions, Morocco has moved towards reconciliation and called for dialogue and the opening of the border, with King Mohammed VI pushing for a new dynamic in his throne speech as tensions rose. On the other hand, Algeria’s rulers, who largely belong to an older generation and are beleaguered by internal political crises, are not demonstrating any willingness or political interest in reconciliation. In any event, in order for the bilateral relations to improve, leaders on both sides will eventually have to agree to sit at the discussion table.

Ilhem Rachidi is a freelance journalist based in Morocco.

The history of Jews and Muslims is far more entangled than you might imagine – but you have to listen out for it. In "Recording History", Christopher Silver takes us on a sonic ... END_OF_DOCUMENT_TOKEN_TO_BE_REPLACED

Welcome to the world of Al Qasar, where Arabic music collides head-on with punk and psychedelic to create something powerful and beautiful. "Who Are We" is a raucous, subversive ... END_OF_DOCUMENT_TOKEN_TO_BE_REPLACED

The southern shores of the Mediterranean Sea are losing sand faster than almost anywhere else. The ecological and economic damage is immense. The good news is, there are ways to ... END_OF_DOCUMENT_TOKEN_TO_BE_REPLACED

To understand Islamic mysticism, we must first clear up a number of misconceptions, as Marian Brehmer writes in his essay – part 1 of a new series on Sufism END_OF_DOCUMENT_TOKEN_TO_BE_REPLACED

END_OF_DOCUMENT_TOKEN_TO_BE_REPLACED
Social media
and networks
Subscribe to our
newsletter