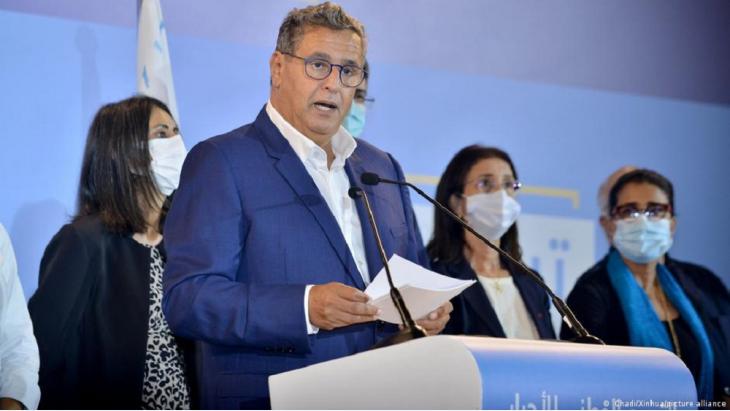 Led by billionaire Aziz Akhannouch, Morocco's new government – elected in September 2021 – has adopted a business mindset. Faced with little parliamentary opposition, the administration also has little to fear from critical media, the last independent journalists having been consigned to jail. Commentary by Mohamed Taifouri

In keeping with the notion of the first hundred days in office established by U.S. President Roosevelt in 1933, and true to what is fast becoming the norm in Moroccan political life, the country's new premier Aziz Akhannouch turned to the media to present the achievements of his government’s first three months.

Those who followed the broadcast received no indication that the prime minister might have reneged on the promises vaunted in the RNI – National Rally of Independents – electoral manifesto. The latter was relatively ambitious, not only compared to the agendas of others standing for election, but also considering what of these commitments the governing coalition (the National Rally of Independents, the Authenticity & Modernity Party, and Istiqlal) has managed to implement to date.

After all, this trio of parties enjoys a greater degree of harmony and consensus at more levels than has ever been achieved by previous governments. Yet, PM Akhannouch failed to mention any of his election promises.. Indeed, he himself seemed to be unconvinced by his own words – so how could he hope to convince millions of Moroccans that the administration is on the right path? 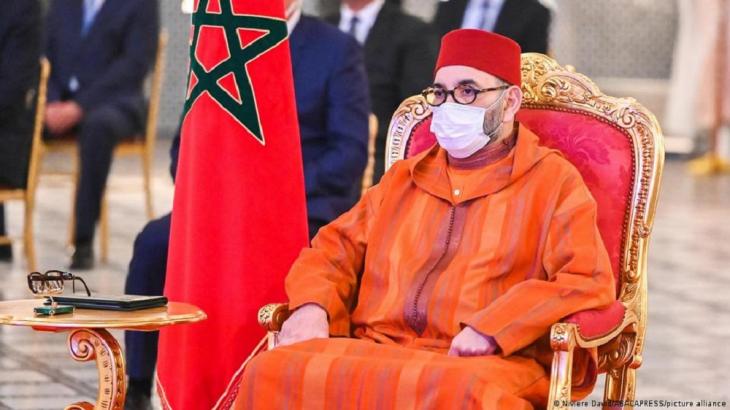 Prime Minister Aziz Akhannouch enjoys excellent relations with King Mohammed VI and can count on the support of the makhzen (members of the King's household and Morocco's deep state). The two major factions in the current coalition – the RNI (National Rally of Independents) and the PAM (Authenticity and Modernity Party) – constitute the long arm of the makhzen, allowing the King's loyal elites to intervene in political life

Entrepreneur Akhannouch talked about the economy, promising to achieve growth of 3.2%, rather than the 4% stated in the government manifesto. This will naturally mean fewer jobs than were promised in the election run-up.

As for social welfare, Akhannouch heralded the government's confirmation of the details of the royal project aimed at ensuring that 11 million Moroccans benefit from health cover and subsistence payments.

To promote employment, the government has hurriedly brought forward the launch of the Awrach programme, intended to create 250,000 jobs annually, with a financial underpinning of 2.25 billion Moroccan dirhams (MAD).

Apart from bandying about numbers and percentages, the prime minister failed to breathe new life into the policies of his current "liberal" government and the ideology of his RNI party. Months after assuming his prime ministerial duties, political life in Morocco is still at a standstill. This is in stark contrast to the dazzlingly dynamic image presented by the RNI while on the campaign trail, and prior to that, during the final months of the previous government.

Even Aziz Akhannouch's official social media presence has forfeited much of the activity, responsiveness and clout he used to display in his days as a minister under the previous government.

Communication is thus the government’s first major hurdle. Once considered the secret of the party’s success in the legislative elections, its savvy campaign strategy and massive social media presence have now become ballast for the government, a problem it is apparently unable to solve.

There is no incentive to maintain public dialogue. The only contributions to the debate have been verbal blunders or management errors by one minister or another, which subsequently became the subject of ridicule in the media and gossip on social media. Like the official government spokesman for instance, when he broached dropping daylight saving and the issue of employment contracts for teachers, or the minister of justice when he spoke about his determination to request a royal pardon for those Hirak supporters still in detention. 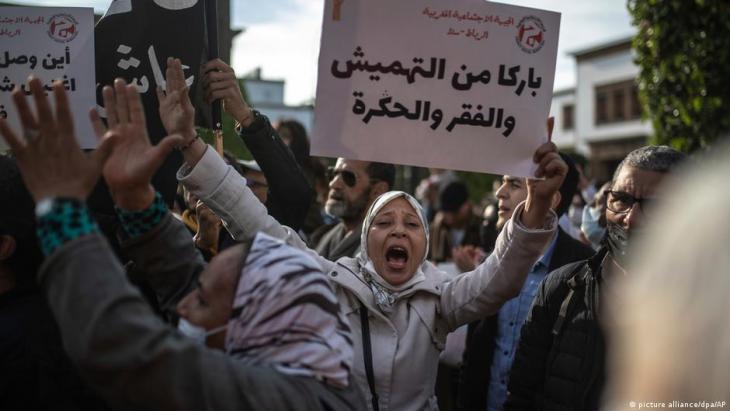 In Rabat, Moroccans demonstrate against high food prices and the failure of the new government. On the placards, the demonstrators demand an end to the marginalisation of the poor, freedom and social justice. The new education minister's decision to set a lower age limit for those entering the teaching profession has also caused resentment. "This was an unprecedented decision in the history of Morocco," writes Taifouri. "Nevertheless, the minister made no attempt to justify his reasons for taking such a step, notwithstanding the fact that teaching has always been a means for children from poor and disadvantaged backgrounds to move up the social ladder"

Never have the people been so quick to protest

One thing is clear: billionaire Aziz Akhannouch approaches government with a businessman’s mindset. Rhetoric and communication are less important in business than action and results – it is all about securing returns and making profits.

This has been demonstrated by a series of government decisions, such as the sudden move requiring those wishing to access public institutions and facilities to show vaccination passes, even though vaccination against coronavirus was and still is optional.

This sparked mass protests, involving whole sections of society – even the lawyers rose up – making Akhannouch's government the first in Morocco’s history to clash with the public during its first few weeks in office.

Another example of the government’s uncommunicative style was the minister of education’s decision to set the minimum age of teachers at 30 years. This was an unprecedented decision in the history of Morocco. Nevertheless, the minister made no attempt to justify his reasons for taking such a step, notwithstanding the fact that teaching has always been a means for children from poor and disadvantaged backgrounds to move up the social ladder.

It was no way to treat such a sensitive area, not to mention that it also violated pledges relating to teachers on temporary contracts made by the prime minister’s party during the election. Moreover, it underlined the "unrealistic" nature of the promise issued by the elected majority to raise the salaries of teachers to 7,500 MAD. Indeed, the idea that they should be raised by a third appears to have gone up in smoke.

Such inflated aspirations and promises underline the fact that the Moroccan people are now being ruled by a government of the elite; they are not politicians. Even the description of "technocrats", which implies choosing decision-makers on the basis of their particular expertise, does not apply to members of Akhannouch's government – hence the deafening silence and political paralysis.

Links to the deep state

There were those who thought the momentum achieved during the election campaign would be maintained or even speeded up a little. But the opposite has been the case. This is all the more surprising, since the current prime minister enjoys excellent relations with King Mohammed VI, can count on the support of the makhzen (members of the King's household and Morocco's deep state), has more than enough allies in the world of business, not to mention among the press, media and civil society organisations.

Moreover, Akhannouch presides over a very manageable coalition. For the first time a Moroccan government has been formed of only three parties, with its principal poles being the RNI (National Rally of Independents) founded in 1978 and the PAM (Authenticity and Modernity Party) founded in 2008. Together they constitute the long arm of the makhzen, allowing the King's loyal elites to intervene in political life.

Akhannouch's government therefore has the opportunity to work in complete freedom; arguably it is the first Moroccan administration to find itself without significant parliamentary opposition, or even a troublesome press, after the jailing of the last independent journalists.

The achievements of Akhannouch's government over the first hundred days reveal that it is delivering on its promise to rid the Moroccan political scene of anything political, including the opposition. During this brief period, the government has already withdrawn seven important bills that were progressing through the legislative system, albeit slowly.

Thus, the government halted debate about a draft law relating to the "unexplained accumulation of wealth" and about a law relating to the "acquisition of public assets". Prior to that, it also withdrew a draft law on "parental health cover". A careful look at the legislation withdrawn reveals that passing those laws would have threatened the interests of those in government who see a golden opportunity to make up for the losses they sustained under the Islamist PJD.

Instead of following in the footsteps of U.S. President Franklin Roosevelt, it might have been better had the prime minister taken the time to internalise one of British Prime Minister Winston Churchill's famous sayings: "A politician needs the ability to foretell what is going to happen... And to have the ability afterwards to explain why it didn't happen".

Mohamed Taifouri is a Moroccan political scientist and publicist. He is a regular contributor with a number of leading Arabic newspapers.

Algeria's decision to unilaterally sever diplomatic ties with Morocco in August 2021 – days after the presidency announced in a statement their relations would be reviewed – was ... END_OF_DOCUMENT_TOKEN_TO_BE_REPLACED

Madrid's about-face on the Western Sahara conflict has enraged Algeria. Trade relations have been frozen unilaterally and a cut in gas supplies to Europe could be in the pipeline ... END_OF_DOCUMENT_TOKEN_TO_BE_REPLACED

Sultana Khaya, 41, has been peacefully resisting the Moroccan occupation of Western Sahara for many years. Because of her campaign to assert the self-determination of the Sahrawi ... END_OF_DOCUMENT_TOKEN_TO_BE_REPLACED

Since Spain abandoned its traditional neutrality towards the conflict in Western Sahara, Morocco has announced a "new phase" in relations between the two countries. But what is ... END_OF_DOCUMENT_TOKEN_TO_BE_REPLACED

Russia's ranking on the World Press Freedom Index has fallen again over the Kremlin's wartime censorship of the Ukraine conflict. From Myanmar to Mexico, journalists continue to ... END_OF_DOCUMENT_TOKEN_TO_BE_REPLACED

For over fifty years, British photographer Peter Sanders travelled across the Middle East and further afield, seeking out the saints of Islam. His work uncovers a little-known ... END_OF_DOCUMENT_TOKEN_TO_BE_REPLACED
Author:
Mohamed Taifouri
Date:
Mail:
Send via mail

END_OF_DOCUMENT_TOKEN_TO_BE_REPLACED
Social media
and networks
Subscribe to our
newsletter