As part of a sweeping reform of religious life in Morocco, women have been receiving training as religious counsellors for the first time ever. The intention is that they will assume religious and educational tasks - bhey are not permitted to lead prayers. By Mohamed Massad

As part of a sweeping reform of religious life in Morocco, women have been receiving training as religious counsellors for the first time ever. The intention is that they will assume religious and educational tasks - but they are not permitted to lead prayers. By Mohamed Massad 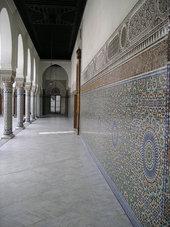 A possible training centre for female religious counsellors in the near future? - the Muhamadiyya mosque in Casablanca

​​Morocco is making a conspicuous effort to curb religious extremism by giving women access to mosques, not only as believers who would like to pray, but also as religious "guides" whose duties include counselling and religious instruction.

This phenomenon is part of what has become known in Morocco as the "restructuring of the religious sector" and is one of the many reforms in operation across the country.

The training of these female religious counsellors, whose main duty is to disseminate religious culture, has been described as a pioneering experiment and is regarded as one of the projects that is bolstering religious reform and protecting it from extremism.

The launch of the programme has been construed as "the establishment of a strategic, comprehensive, and multi-faceted" directive, the aim of which is to protect Morocco from extremism and terrorism while preserving its unique cultural identity through "mediation, moderation, and tolerance."

The Moroccan monarch, King Muhammad VI, unveiled the strategy in April 2004 along with a series of other innovations that included the foundation of educational institutions, dedicated religious bodies in mosques, and the establishment of a fatwa centre that would prevent "confusion and dissension."

The formation of the corps of women counsellors was seen as a step towards endorsing true religion in mosques throughout the kingdom by focusing on religious duties, instruction, and guidance.

The Minister of Religious and Islamic Affairs, Dr Ahmad Tewfiq, declared during the graduation ceremony for the first class of women counsellors that they had "successfully completed a sound and modern 12-month course of religious instruction that guaranteed their adherence to the faith, the Maliki school of religious interpretation, and the policies of the State.

Some observers regard this step and the establishment of a religious television and radio channel as further responses to the suicide bombings that rocked Morocco's largest city, Casablanca, in May 2003. The authorities hold religious extremists responsible for these attacks.

Correcting the image of Islam

Other measures were also taken in the wake of the suicide bombings, namely the closure of some mosques suspected of having received funding from extremist elements that wished to hide out in the mosques and use them to spread their message. Officials have denied, however, that the female religious counsellors are part of the response to such extremist elements.

The Minister of Religious and Islamic Affairs issued a statement to Reuters that the graduation of the first class of female religious counsellors has nothing to do with the prevention of terrorism, but that it addresses an existing need in society.

One counsellor, Karima al-Rejaili, says: "Together with my colleagues, I hope to improve the image of Islam, which is a religion of tolerance and mercy." She goes on to say that she is well aware of the association made in the West between Islam and terrorism.

Does a woman in Islam have the right to lead prayer?

Above all else, this issue has been the source of much criticism and heated debate, especially after Moroccan and International newspapers published an article suggesting that Morocco intended to grant these counsellors the right to lead prayers. This triggered a widespread debate between supporters and opponents of such a move.

With regard to this matter, one counsellor, Zuhur Burbash, 39, says: "Our role is to focus on raising awareness and to provide counselling and advice in religious matters related to women. Our role will be the same as that of the imam with the exception that we will not lead prayers or give the Friday sermon. The ruling on this in the Malilki school of religious thought is quite clear: women are categorically prohibited from leading prayers."

The debate was more or less settled when the High Commission for Religious Knowledge in Morocco issued a fatwa prohibiting women from leading prayer. The commission emphasized that there is a consensus in Islamic law supporting the prohibition that bars women from leading men in prayer.

It was pointed out that if women were to be given permission to lead other women in prayer, a situation would develop whereby women would form a separate group and would not need to join men in communal prayer.

The fatwa also stated the following: "Islamic law has collectively decided against women leading men in prayer because of the changes that would ensue regarding the function and form of prayer." The Commission for fatwa also added that there "is no precedence in the history of Morocco for a woman to lead prayers in a mosque for women or men."

The High Commission for Religious Knowledge and its specific committees are the only official authority permitted to issue fatwas for the kingdom of Morocco. It is interesting to note that before a fatwa was issued, Dr Tewfik rejected what Moroccan and International newspapers wrote regarding Moroccan women leading prayer in mosques.

Dr Tewfik also stressed the need to differentiate between the counselling role afforded to these women and the role of the imams. He pointed out that the specific duties of these counsellors are restricted to cultural and social activities in mosques, arbitration in family disputes within the home, conciliation between family members and society at large, and the supervision of religious, educational, and cultural activities at the mosque.

The issue generated a debate among religious scholars around the world - in both the East and the West. Some called for a review of original religious authoritative texts in order to ascertain whether there are conditions under which women are permitted to lead men in prayer.

The conclusion reached was that women are permitted to lead men in prayer under certain circumstances, namely in the private sphere, not in a public domain such as a mosque.

Analysis Halima Krausen
Can Women Be Imams?
In the face of the controversy over Amina Wadud's Friday prayer, Muslim scholar Halima Krausen argues that we should have the courage to ask our own questions, to study the matter conscientiously and to reach conclusions which make sense in our times

Female Preachers in Turkey
Challenging Traditional Gender Roles
Religious authorities have recently appointed 450 women as preachers. Vaize, as there are called, are more senior than Imams and, like all other authoritative positions, have been the domain of men. Dorian Jones reports

Luthfi Assyaukanie
Amina Wadud's Breakthrough
The controversy continues to rage over Amina Wadud, a woman Muslim scholar, who recently led Friday prayer services in New York. Her case is ultimately not about gender and prayer, but about religious tolerance, says Luthfi Assyaukanie